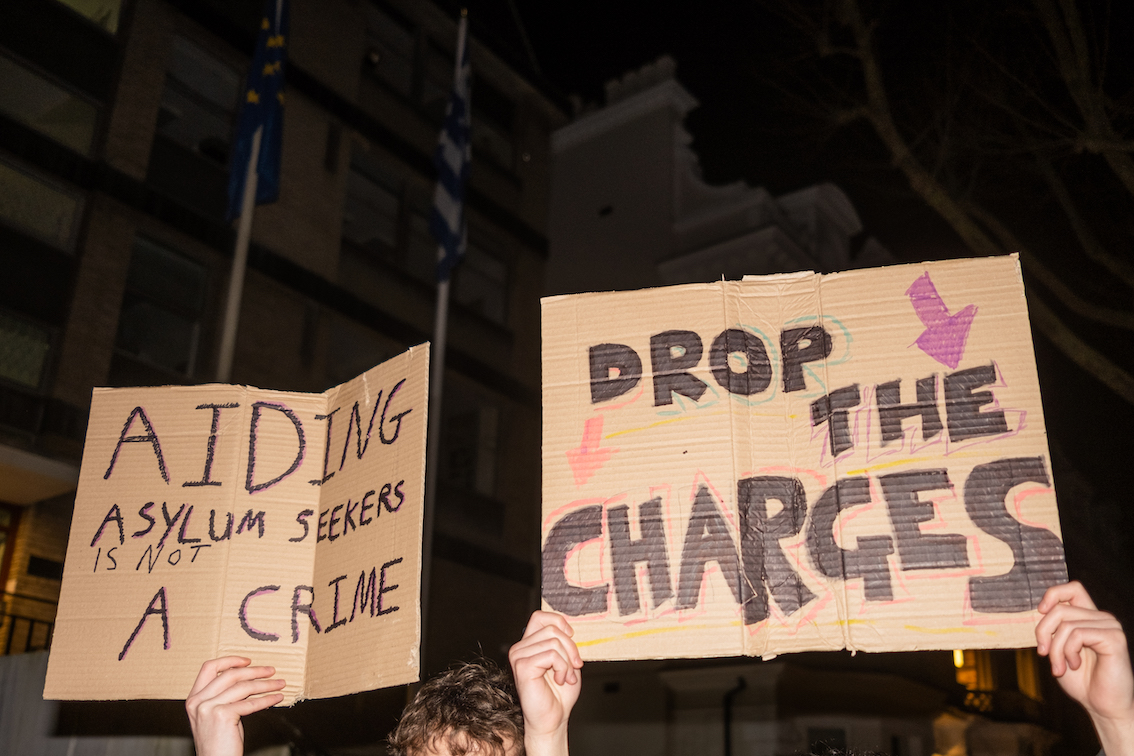 A group of aid workers face prison for helping to save people fleeing their homes at sea. If they are charged, it will have a chilling effect on humanitarian efforts.

A group of aid workers face imprisonment for helping to save people fleeing their homes at sea. If they are charged, it will have a chilling effect on humanitarian efforts, writes Ben Smoke.

There is very little that comes close to the stress of being on trial. The experience of being in a dock is, in of itself, harrowing. The pomp and ceremony of a court – especially where a potential custodial sentence looms large – form a uniquely impenetrable and anxiety-inducing experience. Legal systems move at a glacial pace. Where complex or high-profile cases are concerned, they are liable to delays of weeks, months or even years. Every moment of waiting or treading water is agony. A caustic horror that spreads through your body, slowly breaking you down.

It’s this agony that has infected the lives of Séan Binder, Sarah Mardini and Nassos Karakitsos. The three, along with dozens of others, were arrested in 2018 while volunteering with Emergency Response Centre International (ERCI) on the Greek Island of Lesvos doing search and rescue for those in trouble at sea making the crossing to safety.

They served over 100 days in pre-trial detention and when finally released, faced charges including facilitation of illegal entry, espionage, money laundering and illegal use of radio communications. The basis of the charges of espionage lie in the use of encrypted messaging services like WhatsApp which has over two billion users globally. They face up to 25 years in prison if convicted on all charges. 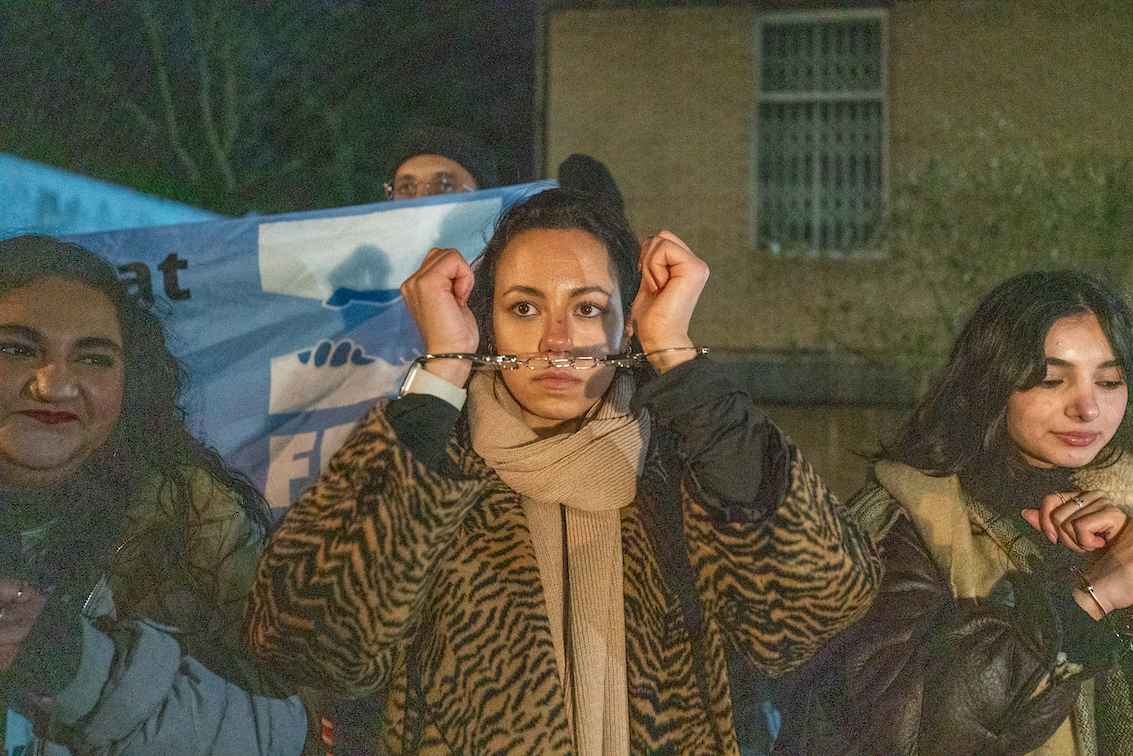 I first met Séan at a panel at the Labour Party conference in September 2019 and since then, we’ve grown to be friends and spent time organising together. The panel included those who, like Séan and I, have acted in solidarity with people at the sharpest edges of the world’s borders and faced criminalisation for it. It took place a few months after I was sentenced following a conviction on terror related charges after I was one of 15 people who broke into Stansted airport in March 2017 to lock ourselves to a deportation charter flight.

The criminalisation of basic humanity and, in the case of Séan, Sarah and Nassos, the upholding of key maritime law in relation to helping those in distress at sea, has only increased as the walls around Europe have been built ever higher.

In September 2020, Greek authorities announced criminal cases against 33 individuals working for different organisations. In July 2021, authorities leaked to the press that a criminal case had started against 10 individuals working for organisations accusing them of facilitating the illegal entry of foreigners into Greece, violations of immigration law and espionage. While targeting organisations that support refugees, Greek authorities are being accused of consistently endangering the lives of refugees at sea and violating their right to apply for asylum. 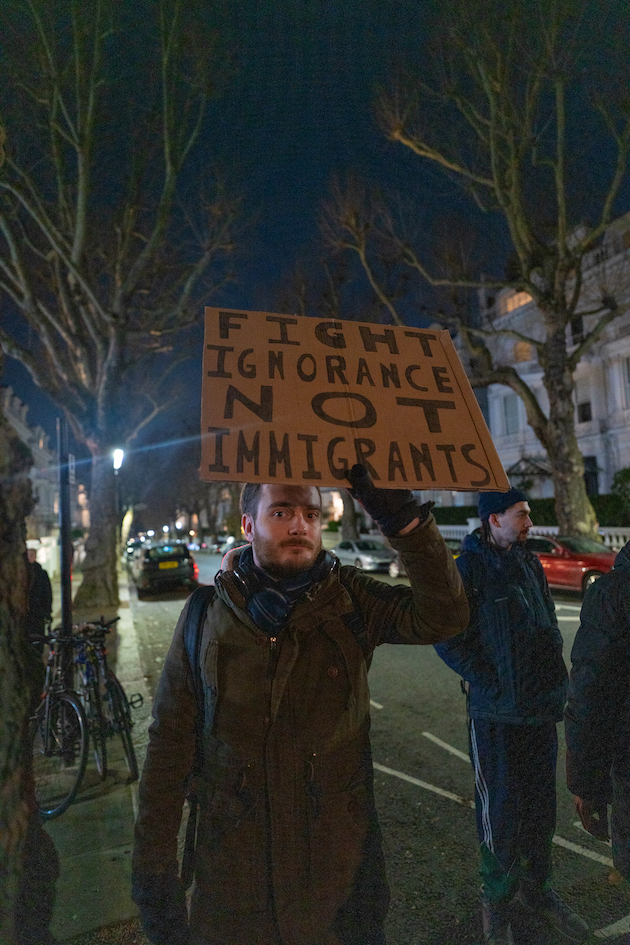 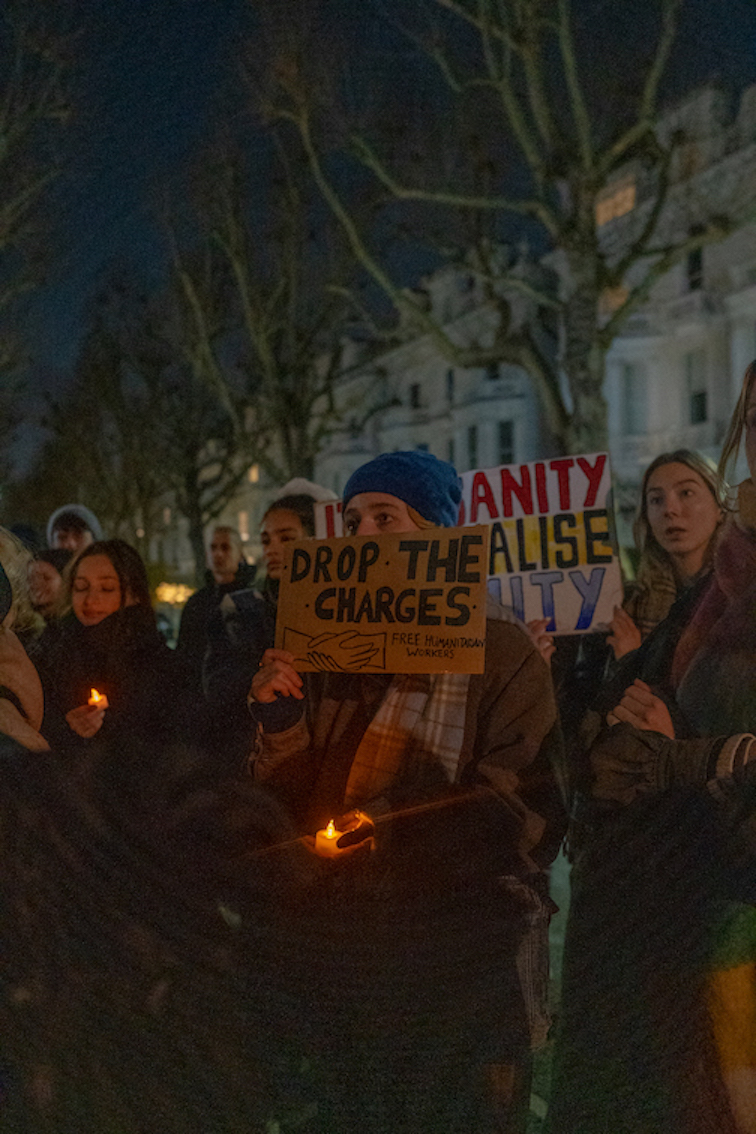 In November 2021, Séan, Sarah and Nassos faced trial in Lesvos for the following misdemeanours: forgery, illegal use of radio frequencies and espionage. Another 21 people faced related charges. The trial was adjourned on the same day and referred to a higher court. I was proud to speak at a demo outside the Greek Embassy in London calling for the charges to be dropped.

Over a year later, the three once again face trial. While Séan, Nassos and others have been able to be present for the case, which started on Tuesday, Sarah, a Syrian refugee (who herself made the journey across Europe and was recently the subject of the Netflix film The Swimmers) was denied entry to Greece.

The group’s legal team claim there are a number of stark procedural errors that stand in the way of a fair trial. These include the issuing of untranslated indictments, as well as only issuing the indictment to some defendants. They claim that some of the indictments have missing pages with others not clearly stating what offences individuals have been charged with on top of not allowing Sarah to be present at her own trial. 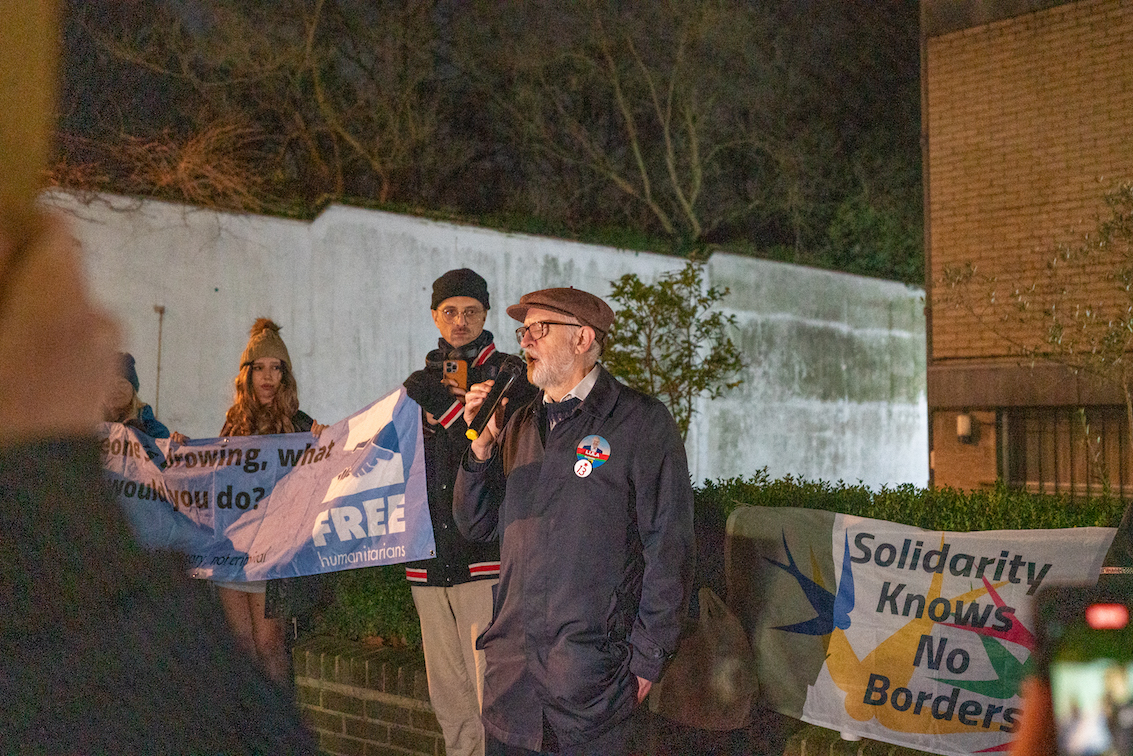 Speaking outside the courthouse yesterday, Séan told the waiting press that he hoped that the “rule of law not the rule of flaws” would be enforced when the trial returns on Friday. Earlier this week, I was proud to host another demonstration in support of Séan, Sarah and Nassos hosted by Free Humanitarians. Up to 100 people gathered outside the Greek Embassy to call on authorities to drop the charges.

Those present were given an update on the case, as well as being asked to send a WhatsApp to a friend who had not yet heard of the trial. A speaker with experience of search and rescue in the Mediterranean gave a passionate account of the realities of the situation at present. A member of Channel Rescue, a group of volunteers based in Kent and Sussex who monitor the channel for those in distress in the channel, spoke of the British context as well as the tragic and avoidable loss of life here.

The crowd were also addressed by Nadia Whittome, Labour MP for Nottingham East who said, “It’s not just the Greek government that has the blood of refugees on its hands or seeks to persecute those standing up for migrants’ rights. It’s the UK government too.

“In the UK and in the EU, we need new asylum policies with compassion at their core. Not only should we be celebrating those saving lives on our borders, we should be making their work obsolete.” 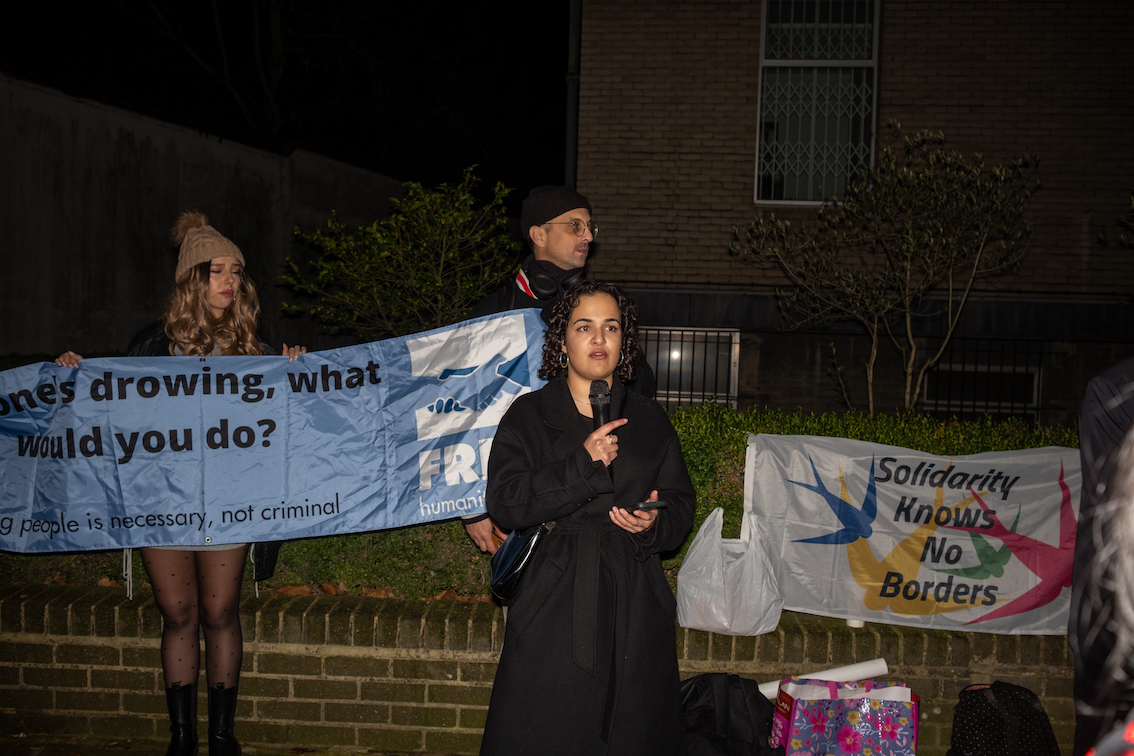 Whittome continued: “I want a world where no person ever has to risk their life in a flimsy dinghy in the Med or in the Channel. To do that, governments must create safe and legal routes.  Without them, refugees have little choice but to continue to take dangerous journeys. Again and again, tragedy after tragedy.”

Jeremy Corbyn, MP for Islington North, attended in solidarity with the three. He told those in attendance, “The Greek authorities must immediately drop the charges against all those prosecuted for saving the lives of refugees at sea, including my constituent Séan Binder.  Nobody would flee their home country, risking their own lives and those of their families, including small children, in a cheap rubber dinghy unless they were absolutely desperate to escape poverty, famine or war.”

Corbyn added: “Saving lives at sea is not a crime – justice being served will see all those charged go free, as well as a world that treats its most vulnerable people with the respect, dignity and compassion that each of us deserves.”

The reality of it is that I desperately do not want my friend or the people he worked and acted with to save lives to go to prison. My interest and investment in the case goes far beyond that, or even my own experiences of criminalisation. Across Europe, and indeed the world, governments continue to build walls and fences that force people – often extremely vulnerable, desperate people – to take harrowing and dangerous journeys in pursuit of the safety and security that many of us enjoy every day without thinking about it.

The criminalisation of those seeking to help people in need, those who would check a pulse before a passport, is just another facet of this abominable securitisation and it must be resisted in all forms.

The Greek authorities must drop the charges against Séan, Sarah, Nassos and all others facing persecution. Indeed they, along with governments across the world, must reverse the policies that seek to criminalise and persecute people fleeing and moving for safety or a better life. We must stand with Séan, Sarah and Nassos, and all those fighting or fleeing, and demand a world where humanity and help, rather than hard borders and enforcement, are at the centre of everything we do and are.

Linkedin
OTHER ARTICLES
Activists and campaigners are fighting back against new laws that would seriously undermine the ability to take industrial action, calling it an attack on fundamental workers' rights.
A new law change is enabling Britain’s donor-conceived children to know the truth about their origins – but campaigners say the fertility industry must do more to protect people.
Following the release of his debut single, Deyaz talks battling addiction, dealing with his struggles through music, and building a budding music career from his living room.
As she gears up for the release of her first book, the 24-year-old climate activist talks standing up to authority and building a more inclusive movement.
After blocking the Scottish government’s gender recognition reform bill, Westminster is now devising further changes to the law to make it harder for trans people to self-identify.
After building his reputation covering the US civil rights movement in the 1960s, the photographer went on to produce some of the most enduring images of the past century.