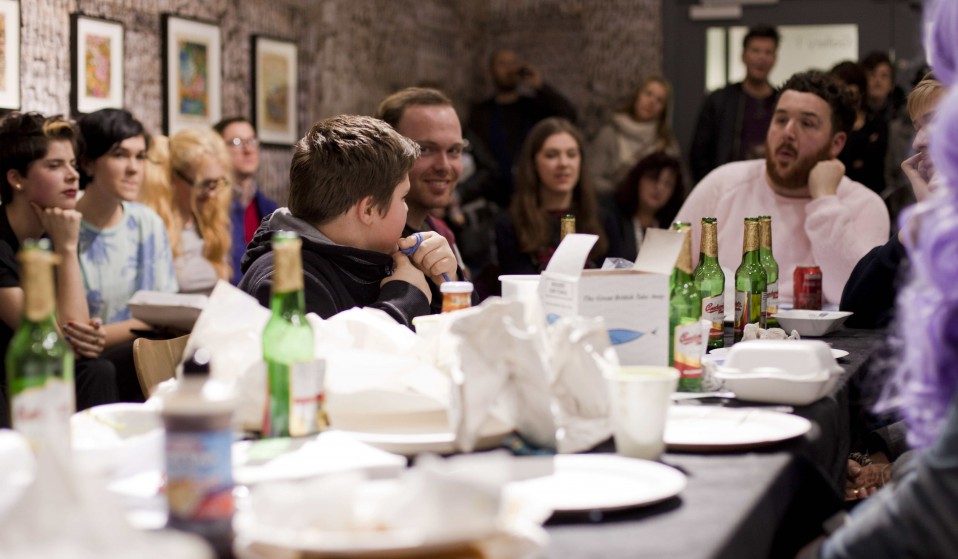 When queer artist Scottee was asked to organise an event for LGBT History Month in his seaside town, he responded with one, seemingly simple, question.

When queer artist Scottee was asked to organise an event for LGBT History Month in his seaside town, he responded with one, seemingly simple, question.

I’ve become one of those people Londoners loath. I keep telling anyone who’ll listen that I’ve moved to the seaside, banging on about how great is to be out of the big city and close to the waves.

Southend on the southeast coast of England is my new home, and it’s a proper British seaside town: it’s brilliantly naff, we’ve got a right wing MP, it’s a little bit rough around the edges, and there are no queers in sight.

Unlike Brighton and more recently Margate, Southend hasn’t had a queer revolution. The local gay bar is a lone island of pool playing and imported drag from elsewhere in the country. On the face of it, my new neighbourhood is nice, normal and nuclear; a place to bring up white, able bodied, blonde haired children so they can pass their 11+. I moved here ‘cause it’s cheap.

With LGBT History Month in full swing elsewhere in the UK my inbox was brimming with various establishments all eager for me to be their queer remit for February. Happy to exploit my identity, I signed up to almost everything.

To my surprise someone from Southend asked me to be do something too, the brilliant Focal Point Gallery just down the road. I knew whatever it was it had to be the start of a conversation and not a knees up; as much as I like Judy Garland films putting on a show isn’t the answer to every dilemma. 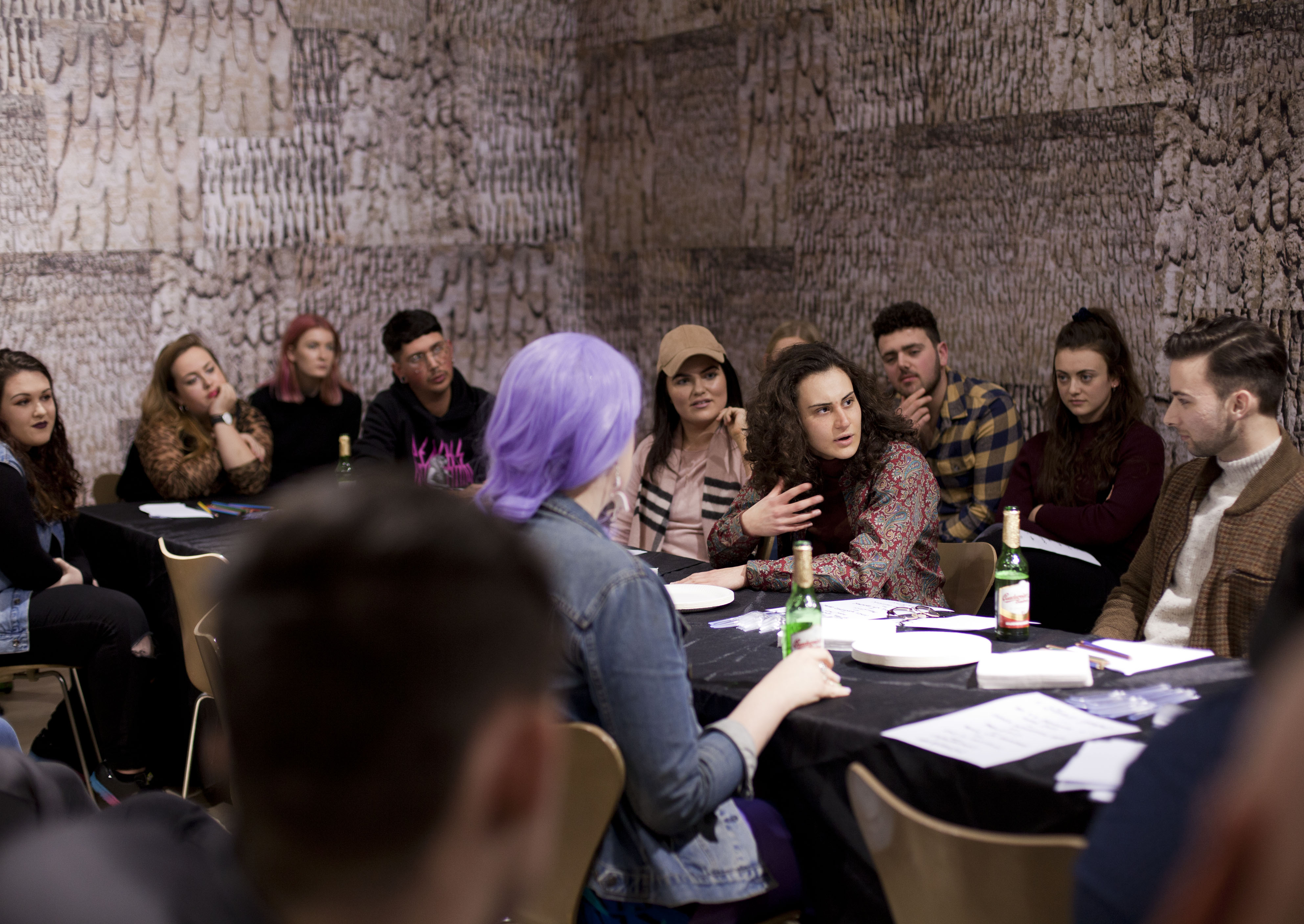 I hatched a plan, to invite anyone and everyone! I wanted to ask them a simple yet polarising question: is Southend homophobic? The carrot to entice the community would be a communal meal of fish & chips on this Saturday night.

I sit waiting nervously in the green room with local artist Fanny, who’s painting her face and brushing her weave. Suddenly it dawns on me, what if no one shows up? What if no one comes forward? What if there are really no queers in Southend?

As I step out into the gallery I’m met by a gang of teenagers, who I presume are queer. They run towards me, rub my fun, pink fur tracksuit and ask for a selfie. Definitely queer. They are excited, awkward and breaking all the unwritten rules about behaviour in a gallery, and I love them for it.

The gallery is adorned with a long table and 40 chairs, and quickly starts fills up. Before we know it the kerfuffle of organising more chairs is in full swing. With 70 people crammed in we sit down and I ask the question – is Southend homophobic?

For the next hour we hear stories of being bullied at school, mum’s telling femme boys wearing the word queer on a battle jacket in front of her children is “not right”. We share feelings of alienation and visibility, this is the stuff Channel 4 documentaries of the 90s were made of, why are we still going through it?

Soon after a young lad joins us at the table, and puts his hand up as if we were in class. He coughs, and then starts to talk.

He tells us about how coming out takes guts and bravery, how having queer friends means he has a support network. It’s music to my ears, but we all know he’s one of the lucky ones.

“I don’t meant to be racist but why is there only one black person here?” he continues. Again, I want to pick him up and squeeze him. 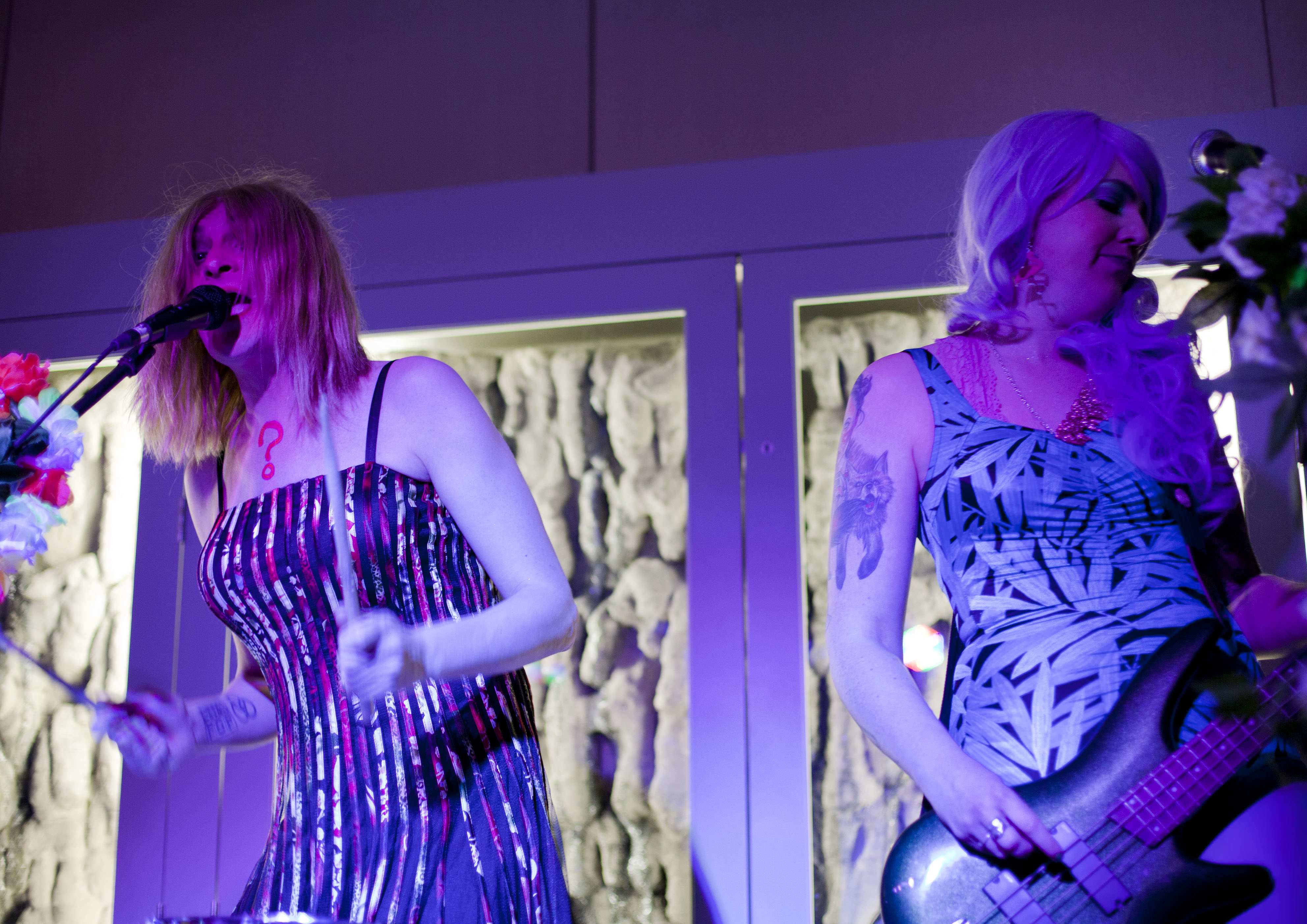 He goes on to tell us why having Gok Wan in the local pantomime was important, how it meant that local people were applauding a gay person each night. He want us to have pubs and clubs that are “for both gays and straights”.

It’s hard to avoid responding to his optimism condescendingly, but he reminds us of the importance of visibility and harmony, something that’s perhaps left our more cynical queer lives.

Another teenager joins the table and says how difficult it has been to persuade their school to give them a space for an LGBTQI* meeting room, they want it for just one afternoon each week,.

We talk about holding hands in public, feeling safe and being visible. I admit to my new found friends that I often feel like the only queer person in Southend.

As I do young woman comes to the table, visibly shaking but wanting to share. She tells us as that a trans* woman, sometimes to be invisible means that you’re passing; my desire for everyone to be seen and positively acknowledged is rightly thrown out the gallery window.

The chips arrive, we spill the vinegar, and instigate conversation around action. The take home message from everyone is queerness is happening in Southend, we just didn’t know each other. 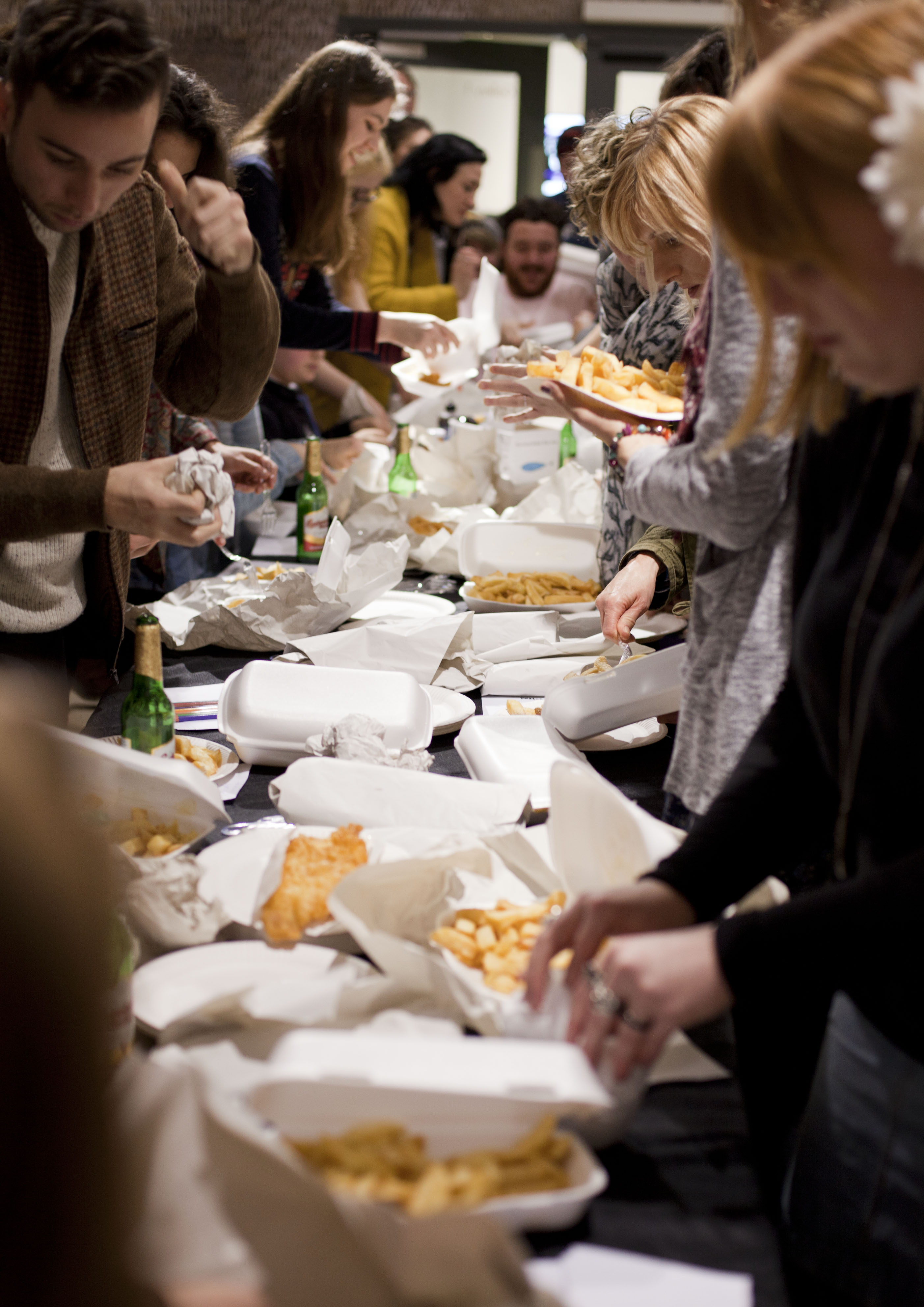 We watch local trans* riot grrrl band T*Bitch scream songs about gender expectations and dressing up to finish our community dinner in style.

Walking to the pub both my head and heart are filled with ideas for action; is this what those brave queers of the 60s and before felt? I turn to Twitter and the conversation is still going, people are joining the jots, plotting, and adding each other to their networks.

Just one Saturday night and a pile of chips has led to a more visible community, it’s a result I could never have dreamed of.

Like our 14 year old-before-his-years teen I love the idea of ‘joint space’, but I can’t help but think with such unique issues facing our community: ostracisation, visibility, isolation and complex mental and physical health needs, a community space to call our own is needed now as much as it was in the 80s.

Where did it go? We had it! Gay men, the gatekeepers of gaydom, point to Grindr to explain how queer spaces have disappeared, but I fear the disappearance of space isn’t so easily explained. It was largely white, gay, cis-men who controlled our spaces, as now that they’ve become more accepted in society queer space has fallen away. Coincidence?

Without queer space – a space to see yourself reflected or acknowledged, we’re encouraging further isolation and more frightening assimilation, or homonormativity. In a decade we’ll all be Russell Tovey clones, manspreading camp hatred and telling everyone “I like football AND I’m gay, LOL!” 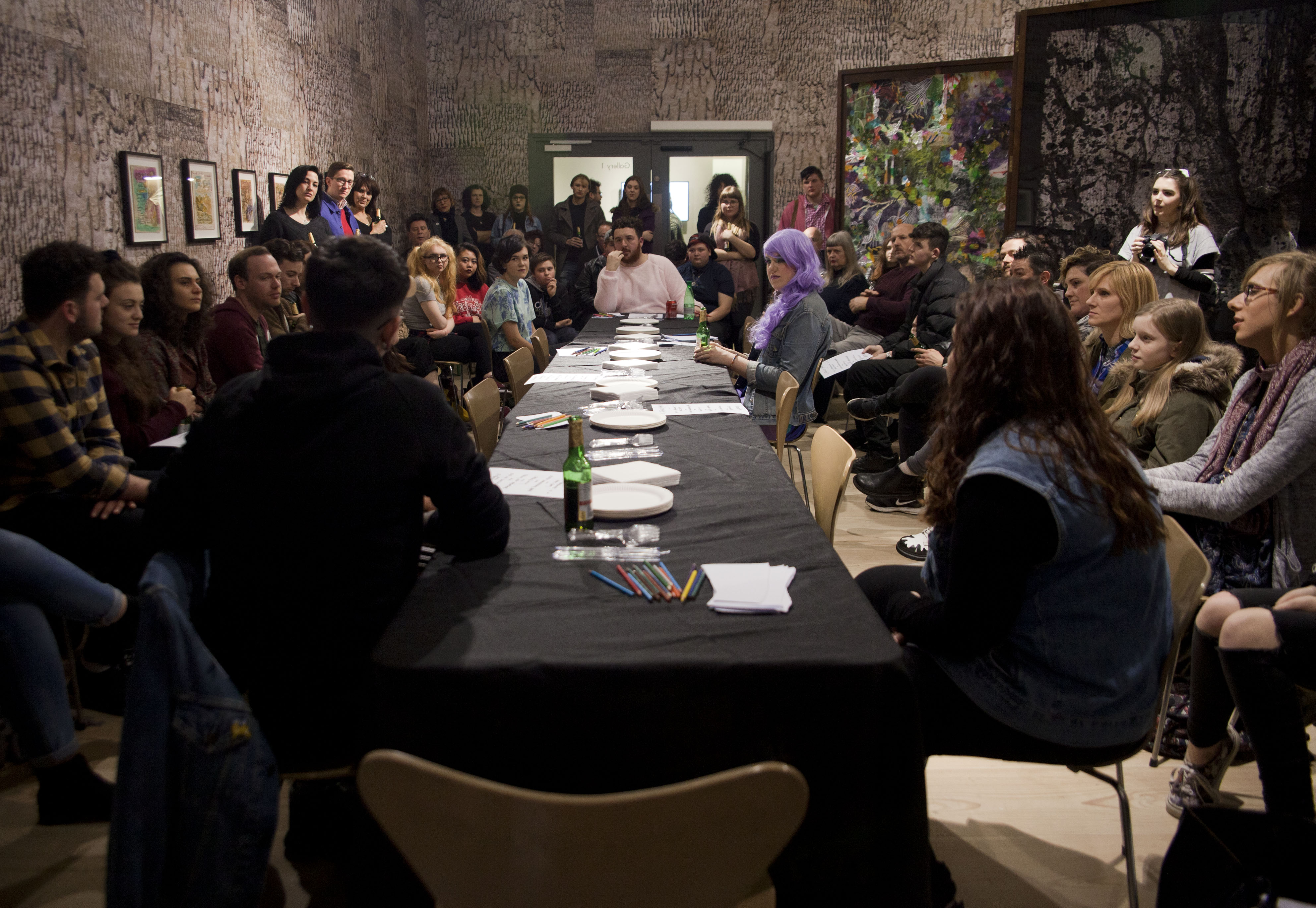 Since Saturday, the importance of queer space in towns like ours has come into focus, and for clarity this isn’t about having gay bars. It’s about having community space where the teens don’t have to fight with their teachers for rooms; where trans* people can be visibly invisible; where QTPOC community of South Essex can feel welcome.

Perhaps all it takes is space to bring people together, for us to feel like we count and our voices to be heard. Perhaps all we want is to feel togetherness, something digital culture can never achieve.

Perhaps I’ll stop telling queer people how brilliant Southend is in an attempt to get them to move there, I’ve found my queer family now, the Southend revolution starts here – all we need now is to find a space to call home.

Linkedin
RELATED ARTICLES
OTHER ARTICLES
The idea that a younger generation is abandoning work has become a popular narrative online, but it doesn’t necessarily reflect reality.
Yesterday thousands gathered outside Buckingham Palace after news of the Queen’s death broke.
A group of young Palestinians have found temporary freedom in the act of parkour, reimagining wreckage and ruins as a series of high-octane playgrounds.
In his 2008 series, the photographer pictured himself as Angela Davis, Martin Luther King Jr., Malcolm X, and other prominent figures.
Photographer David Corio’s archive offers a glimpse inside a revolutionary era of music and nightlife.
Ahead of the release of their first collaborative album, the producer and rapper talk psychedelics and the state of UK hip hop.