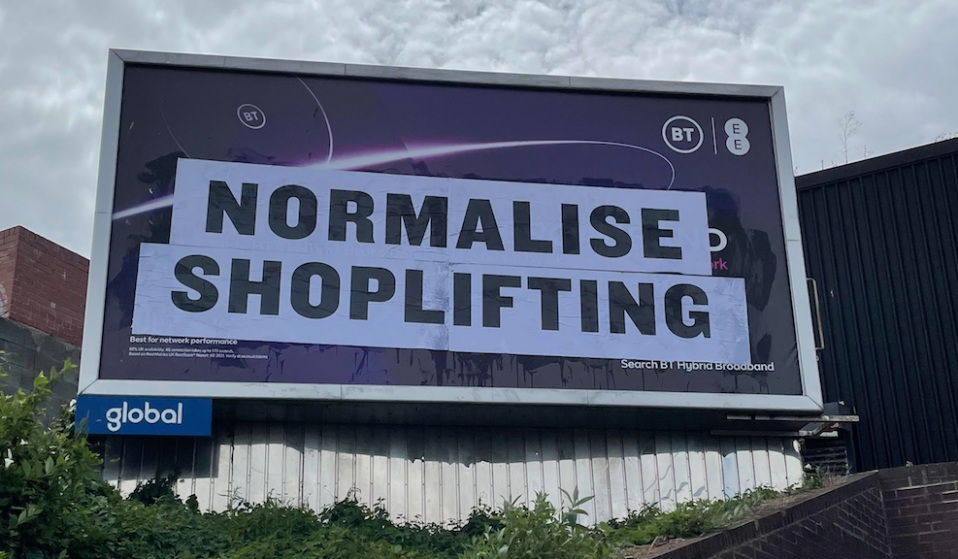 Amid the cost of living crisis, could attitudes toward the five-finger discount be changing?

As the cost of living soars, stealing is on the rise. Could it lead to a change in attitudes toward the five-finger discount?

Each year, the consumer price inflation is measured by a shopping basket of goods crammed full of hundreds of items. Representative of our current consumer habits – this year saw suits and donuts chucked out, meat-free sausages and sports bras thrown in – the change in prices determines the rate at which costs are rising or falling, and in July, the consumer price index hit 10.1 per cent – the highest level of inflation for forty years. So far, so grim – but the shopping basket model is reliant on something: that being, the customer taking the basket to the counter, not straight out the door at the speed of an Aldi cashier.

This, increasingly, isn’t always the case. Shoplifting has risen 21 per cent in the last 12 months, and while other variables have been cited, there’s a clear relationship between the soaring cost-of-living crisis and an increase in stealing. Although food banks offer a last resort for desperate families, a soar in demand and a fall in people financially able to donate has seen them run out of food, leaving the most vulnerable with no other choice.

With this in mind, supermarkets have been getting ready to wage war. Security tags once reserved for alcohol and gadgets have been cropping up on butter, cheese and coffee, not only reflecting their huge increases in price, but also a rise in them being clandestinely lifted off the shelves.

But while supermarkets may be trying to get a handle on stolen goods, others are pushing back. As ever, anarchists and anti-establishment thinkers see shoplifting as a form of social activism that fights back against profiteering companies.

Sainsbury’s are absolutely terrified of shop lifting so one must scan their receipt in order to leave the store. from CasualUK

This is, of course, nothing new. In 1971, Abbie Hoffman published Steal This Book, which would go on to become a driving force behind the social revolution of the 1960s and ’70s. It offered advice on how to shoplift, and inspired a generation to challenge the status quo. Similarly, in 1987, at the end of Thatcher’s Britain, The Smiths hit number 12 in the charts with ‘Shoplifters of the World Unite’ – a spirited call for the redistribution of wealth.

More recently, online communities have advocated the five-finger discount under the banner of anti-capitalism. Notably, there’s ‘Borrowing TikTok’, where anonymous accounts bond over their shoplifting hauls and offer up tips on which problematic businesses to steal from. Likewise, the r/Shoplifting community on Reddit, made to teach people how to steal, was once a thriving community of over 35,000 people – until it was unceremoniously banned in 2018.

Beyond these online movements, visual artists are creating IRL experiences to open the conversation around shoplifting. Among them is Foka Wolf from Birmingham, a masked artist who makes guerilla street art across the UK by inserting fake adverts on public transport, pasting over billboards, and superimposing anti-capitalist messages on private housing development sites. One of his most viral moments came earlier this year via a ‘Normalise Shoplifting’ printout plastered over a city billboard owned by outdoor advertising agency Global.

It followed a previous stunt, which involved a bus stop billboard stating ‘It’s Okay to Steal From Us if You’re Broke, We Still Make a Profit’ made to look like a Tesco advert, which nearly got Foka banned from Instagram. Both pieces hold a personal meaning for Foka. 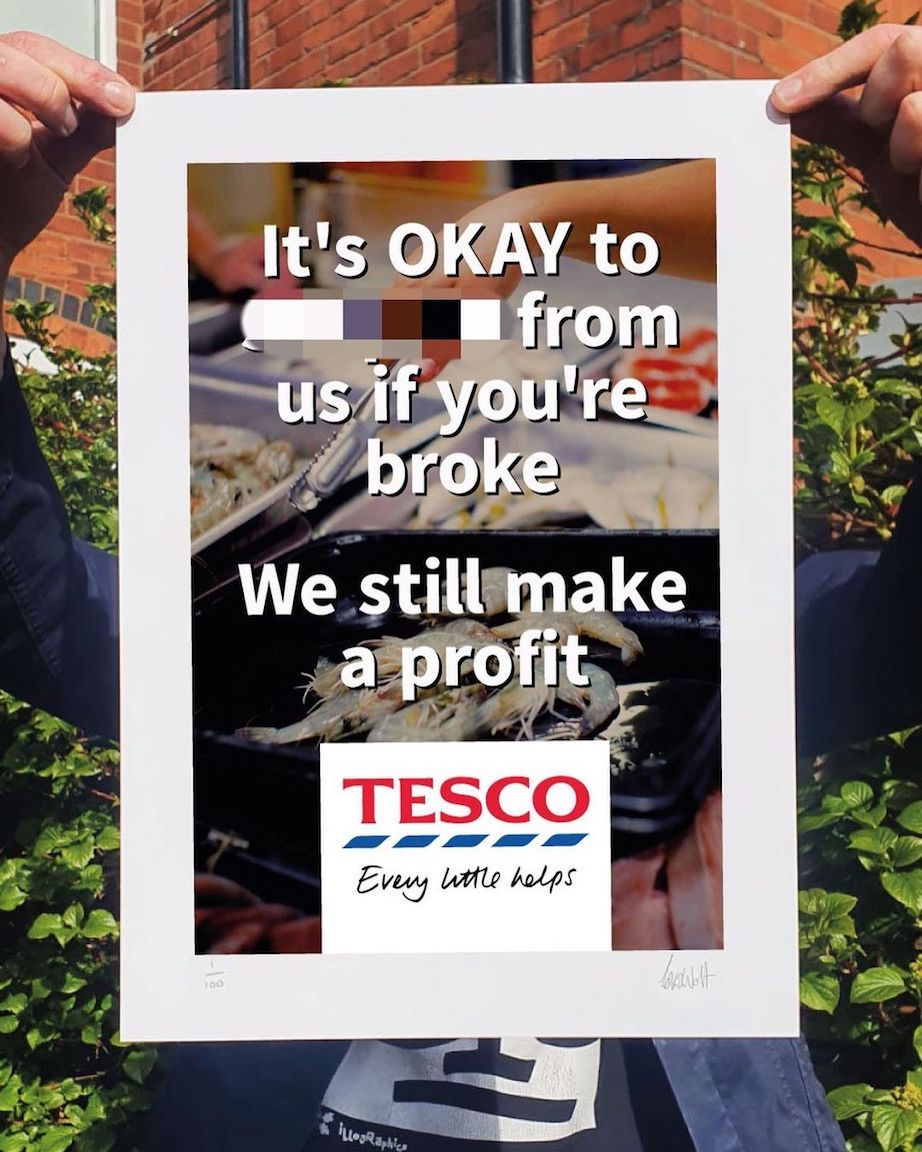 “I was on minimum wage at a supermarket when I was young, like 20 years ago,” he tells Huck. He sees supermarkets as “feeding off money and shitting out pollution” causing people to suffer at the bottom. After witnessing his own family and friends crushed by rising prices, he’s calling for people to “go to the supermarket and steal from big companies” after years of avaricious profiteering. This, of course, doesn’t include independent shops, who themselves are struggling to break even let alone smash profit records. “I’m not saying steal from corner shops or steal off people,” Foka is quick to stress.

While his artworks on shoplifting have elicited some backlash, Foka says these negative responses primarily come from “privileged people who do not understand the situation”. The hundreds of comments and thousands of likes showed him something: people are shoplifting in the masses. “People started to send me tips,” he says. “When I started to repost them on my Stories it snowballed and loads of people were sending them in. I started to realise that everybody sort of does it… People are broke.”

Similarly, creative Rachael Clerke ran an art project called Transactionland in Bristol earlier this year, which saw locals invited to partake in a series of games and challenges themed around consumer culture and set in a pop-up shop. One of the interactive features was ‘Shoplift-o-clock’, “an hour each day where shoplifting was allowed as long as you weren’t caught by Transactionland staff”. And it was real: “It wasn’t a simulation, people actually stole stuff, were caught [but] instead of being handed over to the police, shoplifters were sat down for a pen-portrait, asked for a rundown of their top shoplifting techniques, and a discussion on the ethics of stealing.”

For some, it was their first experience of stealing, while for seasoned shoplifters, it presented a tension, as most said they’d never stolen from an art project. “One of the reasons I wanted to include Shoplift-o-clock in Transactionland was as a way of having a conversation about theft in the context of the wider economy,” she says. “I’m interested in how we might understand it as a part of the bigger picture, that has always been part of how some people get goods, and always will be.”

Of course, for some, shoplifting is a form of activism but for most, it’s just a way to eat. “Most of the things that people steal are just food and basic things they need to get by… a lot of people who shoplift can’t afford to be arrested,” Clerke says. Like Foka, she noticed how her project encouraged people to share tips: “The techniques were really varied. I think as more people become unable to meet their basic needs, they’ll find the information they need.”

Another project encouraging a new approach toward shoplifting was launched in July, and originates from a more unlikely source: the police. Put forward by MP Ian Byrne and backed by Merseyside Police Commissioner Emily Spurrell, it sees supermarkets in the West Derby area of Liverpool feature signs for support services and will effectively decriminalise “desperation theft” by helping those caught access food banks, rather than detaining them.

“No one in our society should need to steal to eat or provide for children,” Spurrell said in a statement last month. “We have many mums and dads who never would have considered shoplifting. What I want is to stop the criminalisation of the working classes.” The Chief Inspector of Constabulary, Andy Cooke, similarly said that officers should use their “discretion” when challenging those who have stolen to eat.

Your regular reminder that if you see someone stealing baby formula, nappies, bread, milk, pasta, ready meals, you didn’t see a fucking thing mind your own business and thank god you’re not so desperate for your own or your babies survival that you’d risk a criminal charge for it

This effective decriminalisation – or in other cases promotion – of shoplifting has put supermarkets in a sticky situation. Conservative politician Kit Malthouse – echoing fellow Tory MP Geoffrey Dickens when The Smiths released ‘Shoplifters of The World Unite’ – condemned the idea of letting people off for shoplifting as the cost of living soars, myopically arguing that the justice system should be “blind” and disputing the idea that poverty leads to crime (this argument is, however, patently untrue).

Supermarkets know they have a fight on their hands, which is why they’re increasingly turning to perhaps the most sinister weapon at their disposal: the wider public. Similar to the official police website encouraging people to ask shoplifters to “politely put the item back”, shops such as Tesco have put up notices on essential items like tampons, encouraging people to “report shoplifting to a member of staff to help build safer communities”.

Both of these approaches underestimate the collective nature of suffering that the cost-of-living crisis will create – even middle-class families will be hit, albeit less – and a growing feeling that the system is cheating us all. People have already shown solidarity with other campaigns including Don’t Pay UK – in itself a form of refusing to pay for essential goods and services.

With things only set to get more desperate this winter, maintaining this collective solidarity will be vital. “Never snitch on someone stealing from the supermarket,” Clerke says. “The worst karma ever. People are going to die this winter from the cold and from the lack of food. Don’t be part of that.”

Linkedin
RELATED ARTICLES
OTHER ARTICLES
Photographer David Corio’s archive offers a glimpse inside a revolutionary era of music and nightlife.
Their drinking habits have seen them derided as ‘generation sensible’, but this overlooks the complex and nuanced reasons people are turning their back on alcohol.
Amid the cost of living crisis, could attitudes toward the five-finger discount be changing?
Financial turmoil is pushing people who work in the sex industry into more dangerous and desperate situations as a means of survival.
Swimmers and local residents are escalating their battle against the UK water industry with some refusing to pay their bills to Southern Water, reports Sam Haddad.
Yesterday thousands gathered outside Buckingham Palace after news of the Queen’s death broke.