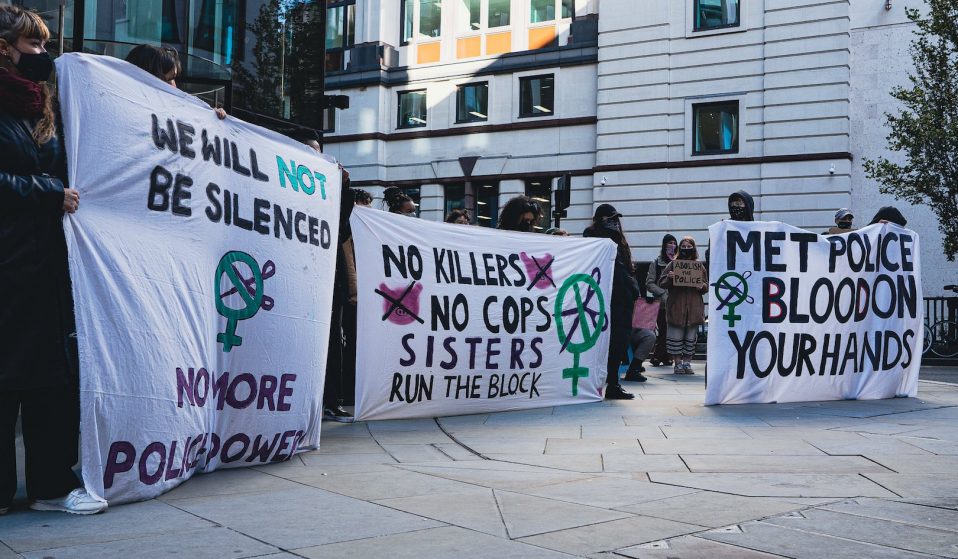 Sisters Uncut are calling on people to recognise the immense power police have over us and to begin to hold them to account.

The direct-action group Sisters Uncut are calling on people to recognise the immense power police have over us and to begin to hold them to account.

Our hearts sank when we learnt that Wayne Couzens had used police powers and equipment to detain and arrest Sarah Everard before kidnapping, raping, and murdering her. It’s an impossible situation for a woman to be in, being confronted by a man with the full force of the law and state behind him. Many of us would have also gotten into his car.

Today, the state is falling over itself, offering ludicrous solutions to a public who now fear interactions with police. We are being told to wave down buses. To scream. To resist arrest by running away or even to obstruct police by not following orders.

Perhaps the most nefarious suggestion being made is the idea we should call the police to check on police. We now know that colleagues called Couzens ‘the rapist’ – they knew about his behaviour. We now know he is connected to several incidences of sexual misconduct dating back to at least 2015. Yesterday, we heard from a former Chief Superintendent who spoke about the fact that police officers “close ranks” to protect each other. Today, a senior police officer has finally admitted that opportunities to stop Couzens had been missed. We clearly cannot rely on the police to hold each other accountable.

This raises a fundamental question: who polices the police, if not the police? Violence is the norm in policing. Unlike any other public institution, they are empowered to detain, search, strip and question our bodies and our property. And like Couzens, abuse of these powers is a daily part of the role. Just ten days after Couzens used police powers to murder Sarah, senior officers gave the green light for their colleagues to use the same powers to harass, arrest and abuse women at the vigil for Sarah at Clapham Common.

There were witnesses who observed what they later found out to be Sarah’s kidnapping. Let’s imagine a different world, one where we withdraw the one thing the ‘hearts and minds’ policing in Britain has always relied on: our consent. Imagine a public who, instead of offering unquestioned trust to the police, recognised the immense power they have over us and began from a position of a radical desire to hold them to account.

Sisters Uncut gathered by the Old Bailey to hold The Met accountable for their role in Sarah Everard’s murder.

From inside the court, we learnt that Wayne Couzens arrested Everard under COVID regs in front of witnesses who did not intervene. pic.twitter.com/2T2VlnDjet

Imagine instead the witnesses began filming Wayne Couzens. They handed Sarah a bust card explaining her rights and the legal obligations of the officer. Imagine those witnesses demanded the name, station, vehicle registration and badge number of Wayne Couzens, while also taking note of the date, time and location of the interaction. Would Sarah have gotten into the car?

Perhaps. Perhaps not. We will never know for certain. And to be clear, Sarah’s murder is not the fault of any of the witnesses. But we live in a society where our unquestioned trust in police provides the consent they need to operate unquestioned. Sisters Uncut are saying we must now withdraw that consent.

We have announced a new police intervention initiative where we will train people to intervene in stop and searches. Off the back of this, we will be looking to put this into practice by building a national network of cop watch patrols trained to intervene in police work and hold them to account.

Police intervention work is not about escalating situations. It is about ensuring those being detained know their rights, the legal obligations of the officers and it’s about ensuring the police follow the letter of the law, when all too often they don’t.

By empowering communities to police the police, we also hope to engage people in a conversation that questions the need for police in society. Sisters Uncut is an abolitionist organisation – we believe institutions of coercion and control perpetuate crime and violence, offering no solution for their end.

They create systems of punitivity and criminalisation that do nothing to address the root causes of harm, instead trapping people in cycles of violence. We want people to imagine what society could look like if we really grappled with the political, social and economic roots of crime and were empowered to hold those in our own communities to account for harm.

We want people to imagine a world without state coercion and violence, a world without police and recognise the fact the only sensible answer on offer for ‘who polices the police’ is us.

Linkedin
RELATED ARTICLES
OTHER ARTICLES
Ahead of the release of their first collaborative album, the producer and rapper talk psychedelics and the state of UK hip hop.
As the Scottish government announces a rent freeze, an activist with Living Rent who fought and won shares how they did it, and what must come next.
Financial turmoil is pushing people who work in the sex industry into more dangerous and desperate situations as a means of survival.
The idea that a younger generation is abandoning work has become a popular narrative online, but it doesn’t necessarily reflect reality.
By turning a real-life crisis into daytime television fodder, TV bosses have once again shown themselves to be completely out of touch with audiences.
Yesterday thousands gathered outside Buckingham Palace after news of the Queen’s death broke.