News & Politics / Sorry, there is no more room: My experience of whiteness in academia 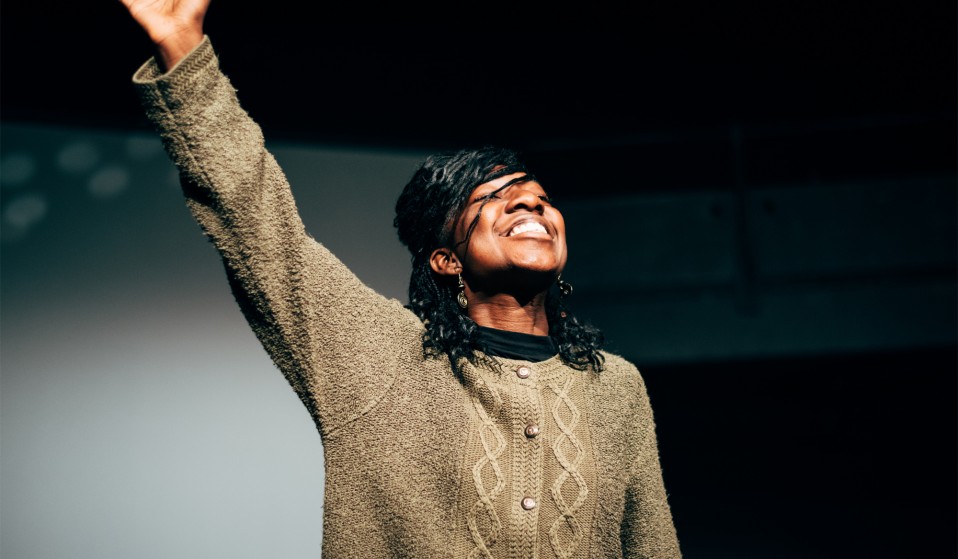 When Eno Mfon arrived at Bristol University, the prospect of immersing herself in the rich cultural history of black performance and literature excited her. The reality saw her face racism from her fellow students, and a curriculum that had no room for anyone not white.

When Eno Mfon arrived at Bristol University, the prospect of immersing herself in the rich cultural history of black performance and literature was exciting. Within days of arriving though, she'd faced explicit racism from her fellow students, and soon found out there was no room, apparently, on her curriculum for anyone who wasn't white.

On 20 July 2016 I graduated with a degree in English Literature and Drama from the University of Bristol. I had made it. But as I sat down in the opulent hall, waiting for my name to be called, I suddenly realised exactly what I had made it through.
For three years I had been wading through a sea of whiteness. At times I felt like the black swan, at other times I was the Loch Ness monster, but sometimes I was just a black girl drowning. 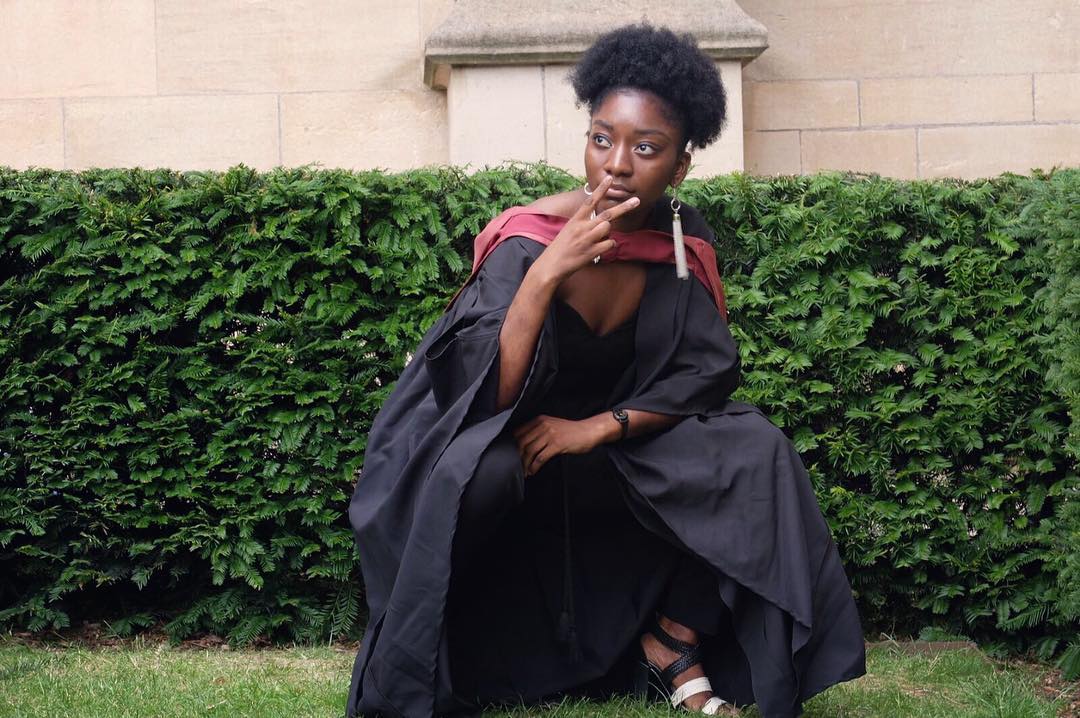 My mother had taken me from the diverse city of London and dropped me off in a place where people’s first impressions of me were coloured by my blackness. In Freshers week someone saw me as nothing more than a twerk instructor demanding me to shake my “nigger bum”. As I watched others making friends, I walked straight into the open arms of isolation, loneliness and depression. So on graduation day, while my peers around me were thinking about their best memories at university, I couldn’t help but think of some of my worst. I thought of this conversation I had with one of the head lecturers in the Drama department. I arrived at his office to discuss an essay I was writing on contemporary black British playwrights, as I had decided to immerse myself completely in contemporary black British theatre. In response to my questions he could only recommend one critical reading, that he had forgotten the name of.
This was my first one on one with this professor, and considering his rank as a senior drama lecturer, I decided to use this opportunity to ask an important question about the course.
Question: why is it that during my three years of study a black theatre maker or critic has never even been mentioned on the course?

He looked stunned. He was sorry, he said, but there was simply “no space for it” on the curriculum. I thought about this for a moment. If there is no space for black practitioners on the course, then what does this say to me as an aspiring black playwright and performer? Will I ever be let into ‘their’ space? I reminded him that the unit we had just been discussing was called ‘Contemporary British Theatre’. Surely, I said, there is more than enough room there for works by black British writers? He replied saying “oh yeah, I suppose we could have put it in in the post 1980s/1990s lectures, sorry”.

Despite it seeming like absolutely zero thought had gone into making room for black theatre makers, he said that the department had actually been aware of this racial diversity issue. So, although there was “no space for it” this year, he assured me that the department’s proposal was this; to slot us into our very own ‘Black Week’. They would be creating a ‘Political Theatre’ unit, in which works by women, LGBTQ and black theatre makers can be discussed. The core units, however, would remain untouched. Apparently, the voices of black creatives can only exist when discussing racial politics.

I then explained to him how, in a previous essay on contemporary immersive theatre, I had told the tutor that ran the module, that I wanted to write about the show, Exhibit B.Exhibit B is a highly controversial piece that sparked London protests and was eventually cancelled. This tutor replied in an email: ‘The cancellation/censorship of Exhibit B is one of the most important things that has happened in theatre in the last few years… good choice.”

I wondered, if this is the “most important” thing to happen in theatre in general, why did this tutor choose not to mention it? This was the perfect space for it. It belonged in this discussion. So why was it pushed out?

I achieved my highest grade in this essay. The level of research and energy I put into it came from my ability to relate and feel passionate about the dialogue surrounding the production. Although I am proud of the my degree classification, I can’t help but wonder if my results would have been different if the discourse were not so limited, Eurocentric and white.

However, it was not only my learning that was impacted by the department’s error; it directly affected the art of the students. There was absolutely no teaching or even a passing reference to the phenomenon of minstrelsy in theatre, and consequently one student proposed the use of ‘black face’, apparently this was the only way they could play the character of Othello. The effects were further seen in the response of my peers to black artists.

According to one student, after visiting a production of Romeo and Juliet, which used an ethnically diverse cast, another student complained that the production has “too many conflicting ideas. Like why was there a black Romeo? I didn’t get it, I didn’t like it”. These were the thoughts that ran through my head as I sat at my graduation, waiting for my named to be called. After the ceremony I posted this on social media:

I was commissioned to write and perform a one woman show at the Bristol Old Vic, during my final year at the university. The production, ‘Check the Label’,  speaks to the important issues of colourism, skin bleaching and European standards of beauty, while also celebrating black British girlhood and sisterhood. The post went viral on social media.

My name became a trending topic in London and I was featured in the Independent, the Daily Mail and Buzzfeed. When I saw the response on social media I felt like I had arrived at my own surprise party. I never expected it. I was left speechless and trying to hold back tears for days (I finally gave up and let it all out).

The love, solidarity and genuine pride that has been expressed by the public is testament to the power of speaking up and sharing your story. While some may try to silence these stories, others are waiting to embrace them. There are people, who do not know you, but they are ready and waiting to tell you that they are so proud of you.

When the academic world and the creative industry choose to erase, ignore or make no effort to accommodate you, it is never because there is “no space”. There is a massive void in the arts; an empty space that is waiting for us, it belongs to us.

Shipped, a new play by Eno Mfon, runs at Hamilton House, Bristol, from 11 October to 22 October 2016. Book your ticket now.

Linkedin
RELATED ARTICLES
OTHER ARTICLES
From the chip shops, to the bingo parlors and burlesque dancers, photographer Mike Coles remembers capturing scenes of holidaymakers by the English coast.
With the virus now a global health emergency, we must take steps to fight misinformation and demand a swift UK-wide vaccine roll out, writes Phil Samba.
As the Criminal Bar Association enters its fifth week of action, criminal barrister Russel Fraser explains why the legal professionals have walked out and how action is likely to escalate.
A series of photos by the late Jerry Dantzic taken in 1957 show a tender side to the iconic Jazz musician.
In the latest instalment of Photographers in Conversation, the creator talks portraiture, platforms and taking inspiration from Little Simz.
To mark the premiere of his new documentary on surfing giant Gerry Lopez, the filmmaker and former pro skateboarder sits down to share his unique brand of wisdom.