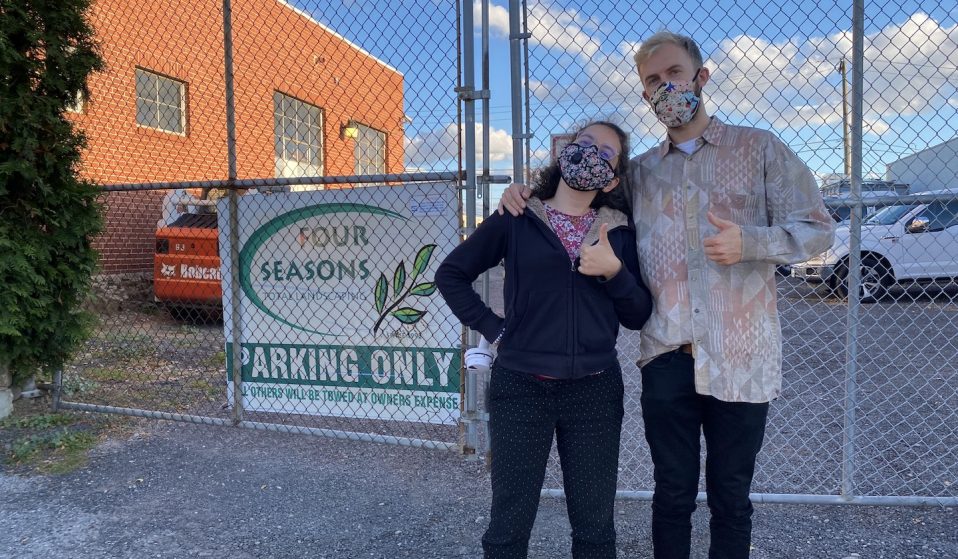 The site of a post-election press conference on the outskirts of Philadelphia has become a place of pilgrimage for all those glad to see the end of Trump’s presidency.

The site of a bizarre post-election press conference on the outskirts of Philadelphia has become an unlikely place of pilgrimage for all those glad to see the end of Trump’s presidency.

Take the exit off of Interstate-95 in Philadelphia’s northern outskirts and you’ll find yourself on State Road. It’s an unloved and entirely unremarkable industrial street you could find anywhere across urban America, with a predictable assortment of auto-repair shops, gas stations and workshops.

We’re a long way away from Trump Tower and the infamous elevator descent Donald Trump used to launch his bid for the presidency in June 2015, but now this street has a celebrity swagger about it, too, and is drawing visitors from across Pennsylvania and beyond.

Everybody is here to visit Four Seasons Total Landscaping, which until this past Saturday, was your regular garden and maintenance business. The Trump campaign sprinkled it with stardust by holding a chaotic post-election press conference here. Now, the fans keep coming and staff have locked the doors.

There’s no need for anyone to give out Hollywood-style star maps here; everyone knows the routine: selfies outside the doorway to Four Seasons Total Landscaping, then walk a few metres down to Fantasy Island adult bookstore to snap a few more pics. A handful of more committed visitors will get some shots of Delaware Valley Crematorium Center across the road. 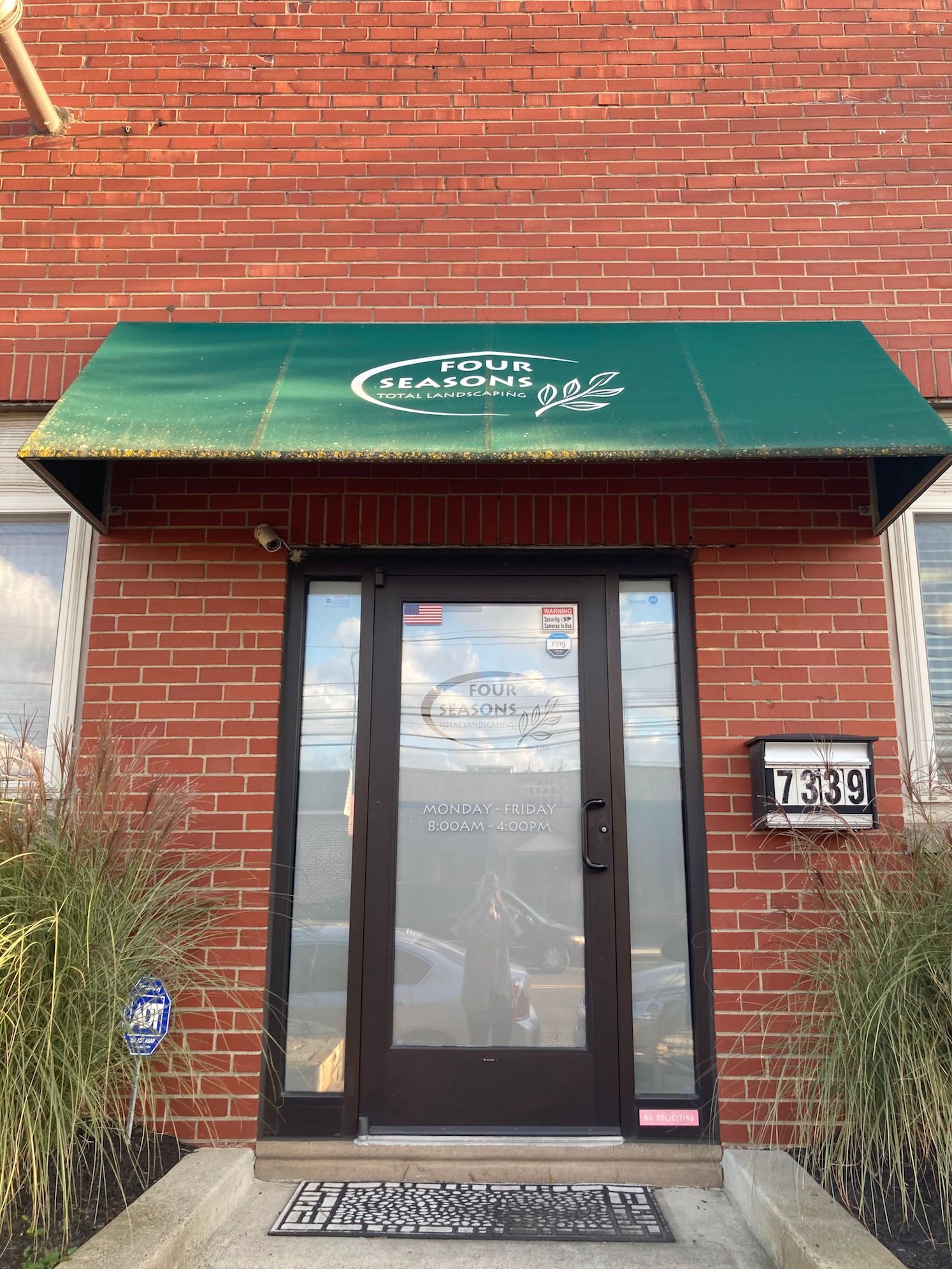 “We saw it on the news and we just had to come and see it for ourselves,” explains Briane and Larry, a middle-aged couple who have driven 12-miles from their home in Bucks County to get their photos outside Total Landscaping’s front door.

Once they’re satisfied, they walk to the end of the building, to the chain-link fence, to try to get into the yard and catch a glimpse of the garage door to which the campaign hastily pinned up their logos – and the now infamous pile of manure. As if their ear-to-ear grins weren’t enough proof, Briane makes explicit: “Oh we hate him [Trump] by the way.”

Time and time again during Trump’s four-year stint in the White House, there have been occurrences so bizarre that you have to pinch yourself and ask if this is, in fact, real. Repeatedly, we have been forced to watch spectacles so shambolic that it’s hard not to find yourself wondering if the joke really is on us.

Trump tweeted out the venue, Four Seasons Philadelphia, then clarified in a subsequent tweet that the location was Four Seasons Total Landscaping in Philadelphia – not, in fact, the luxury hotel chain, as everyone was lead to believe, but the backyard of a garden centre – opposite a crematorium and a few doors down from a sex shop. Some sort of mistake had clearly been made, but why Trump and his team persisted with the venue has left many people baffled. 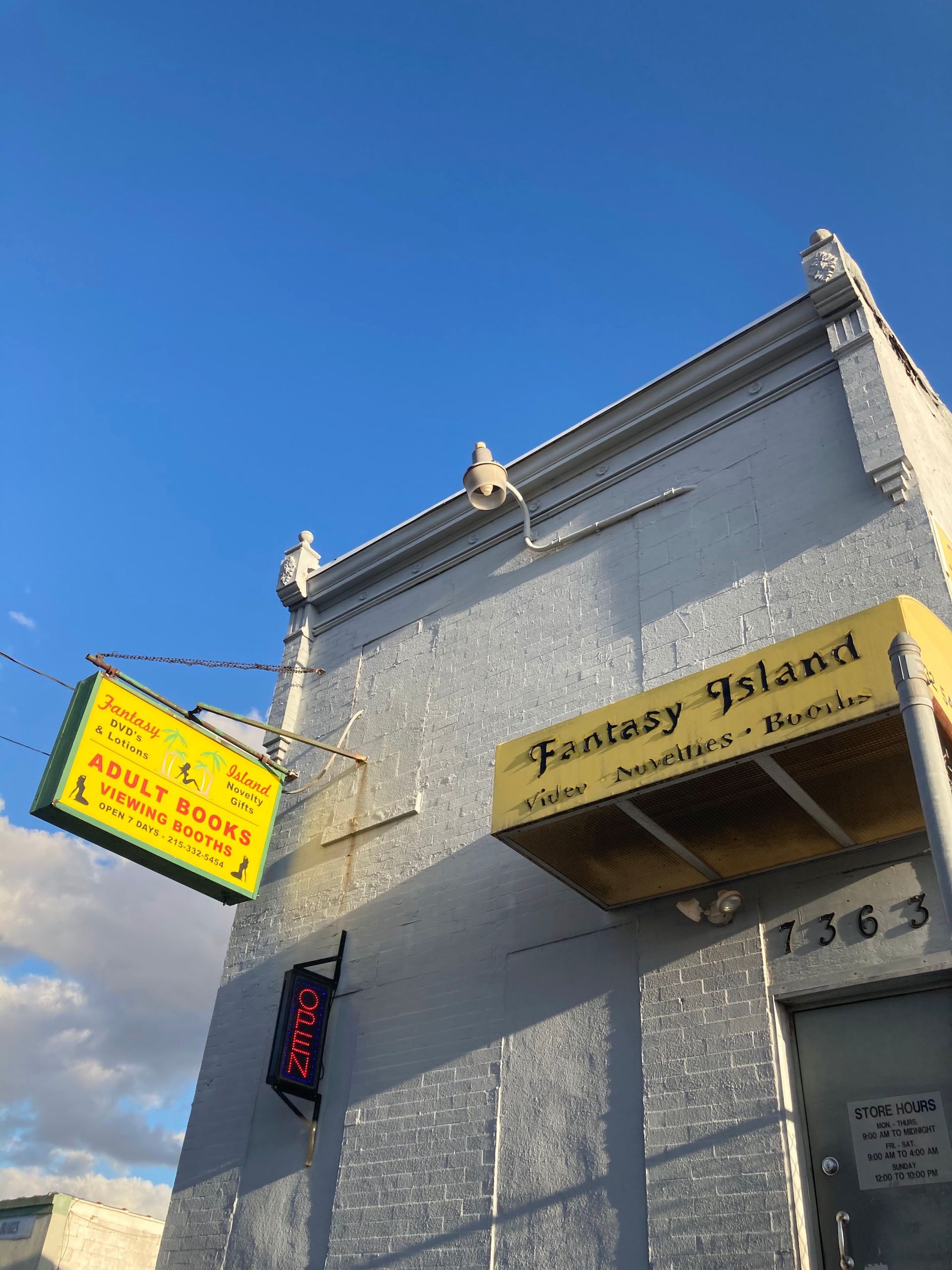 This unlikely location was forever forced into the annals of political mythology as Guiliani – with an enormous pile of manure sitting just out of shot – was told mid-briefing that the election had been called for Joe Biden, as he won Pennsylvania’s 20 electoral college votes to secure the presidency.

“Bad things happen in Philadelphia, bad things,” Trump said during a September presidential debate with Biden, attempting to stoke fears of electoral fraud and discredit an election he looked set to lose.

It’s something Philadelphians have not forgotten. So, it’s almost poetic then, that – despite a bomb scare near the Convention Centre where votes were being counted and two armed men in a Hummer intent on “straightening things out” were intercepted by law enforcement – strong turnout in Philadelphia helped seal the victory for the Democratic presidential candidate.

It’s been four days since the election was called for Biden and Trump has refused to concede, but Four Seasons Total Landscaping is still drawing an eager crowd. Wearing a multicoloured Biden tank top, another tourist called Joseph runs up the steps to the store, lifts a huge bottle of Wild Turkey bourbon whiskey and snaps himself as he chugs it down. “I wanted a picture of this to show my friends,” he says. “People aren’t going to forget this place any time soon.”

A young blonde woman, Justine, has driven here from downtown Philadelphia. She has her boss on the phone from Georgia, who’s insistent on bagging himself an authentic Four Seasons Total Landscaping t-shirt. “I asked one of the workers as he left but he seemed a little sceptical,” she explains. 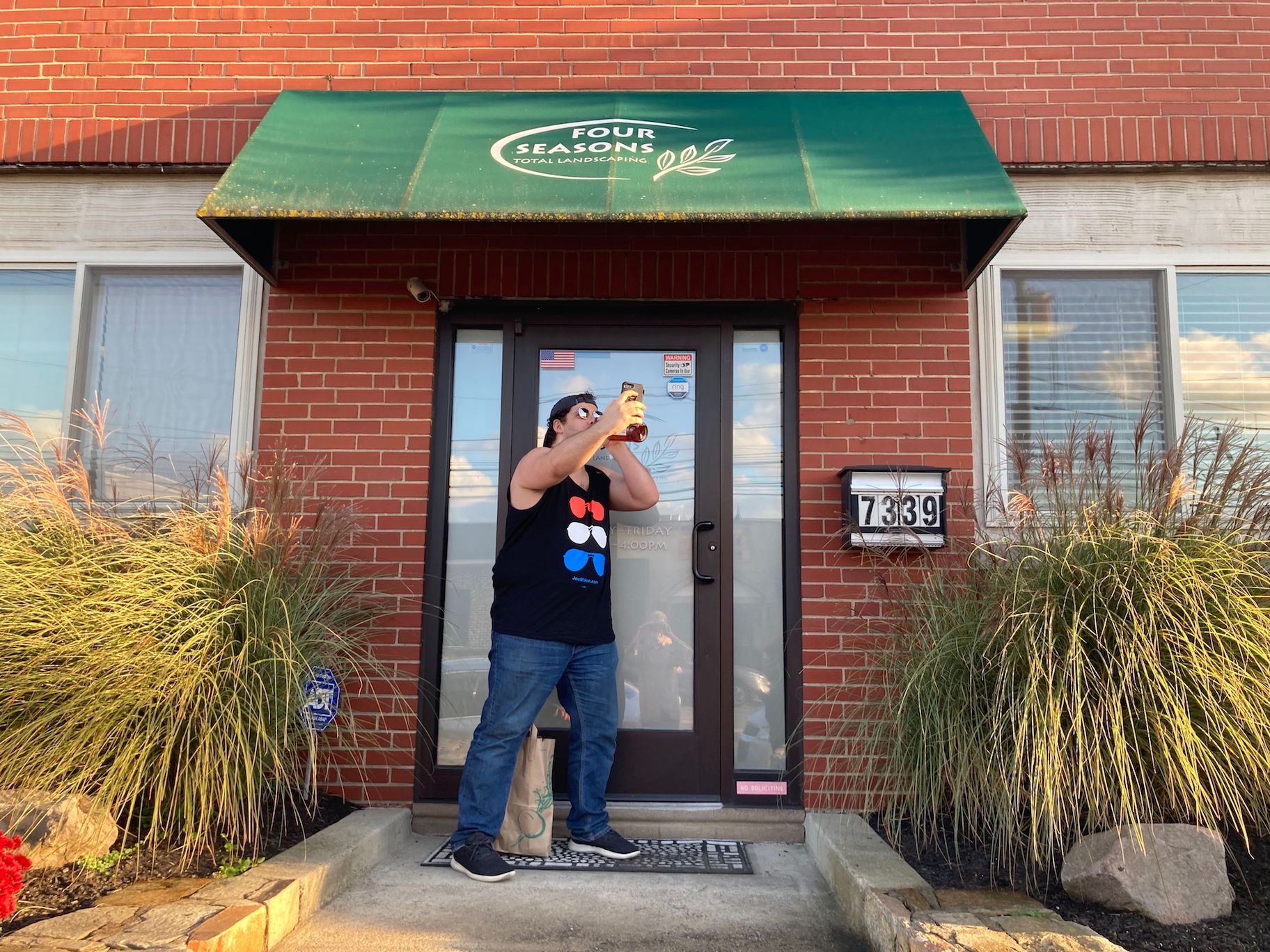 There are now three groups outside the shop’s front door and a spirit of camaraderie develops as they take it in turns to photograph each other posing beneath the Four Seasons Total Landscaping logo. It’s a tribute to Trump’s continued ability to bring people together – whether in adoration or revulsion. Like Justine, they want t-shirts, but knocking on the door gets no response. So, they’re waiting until four PM when the business closes, in the hopes of catching the employees leaving.

A friendly employee in a fluffy sweater called Melissa is the first to leave. She doesn’t seem surprised by the small crowd that greets her as she opens the door.

She chuckles, regains composure and replies in a professional tone: “You know, we’re not allowed to say anything right now. I’m sorry.”

I probe as to whether she could share any personal recollections of the event.  “I’m really sorry, I’m not allowed to say ANYTHING,” she responds. But she takes my card, and promises to get in touch when they decide to break their silence. 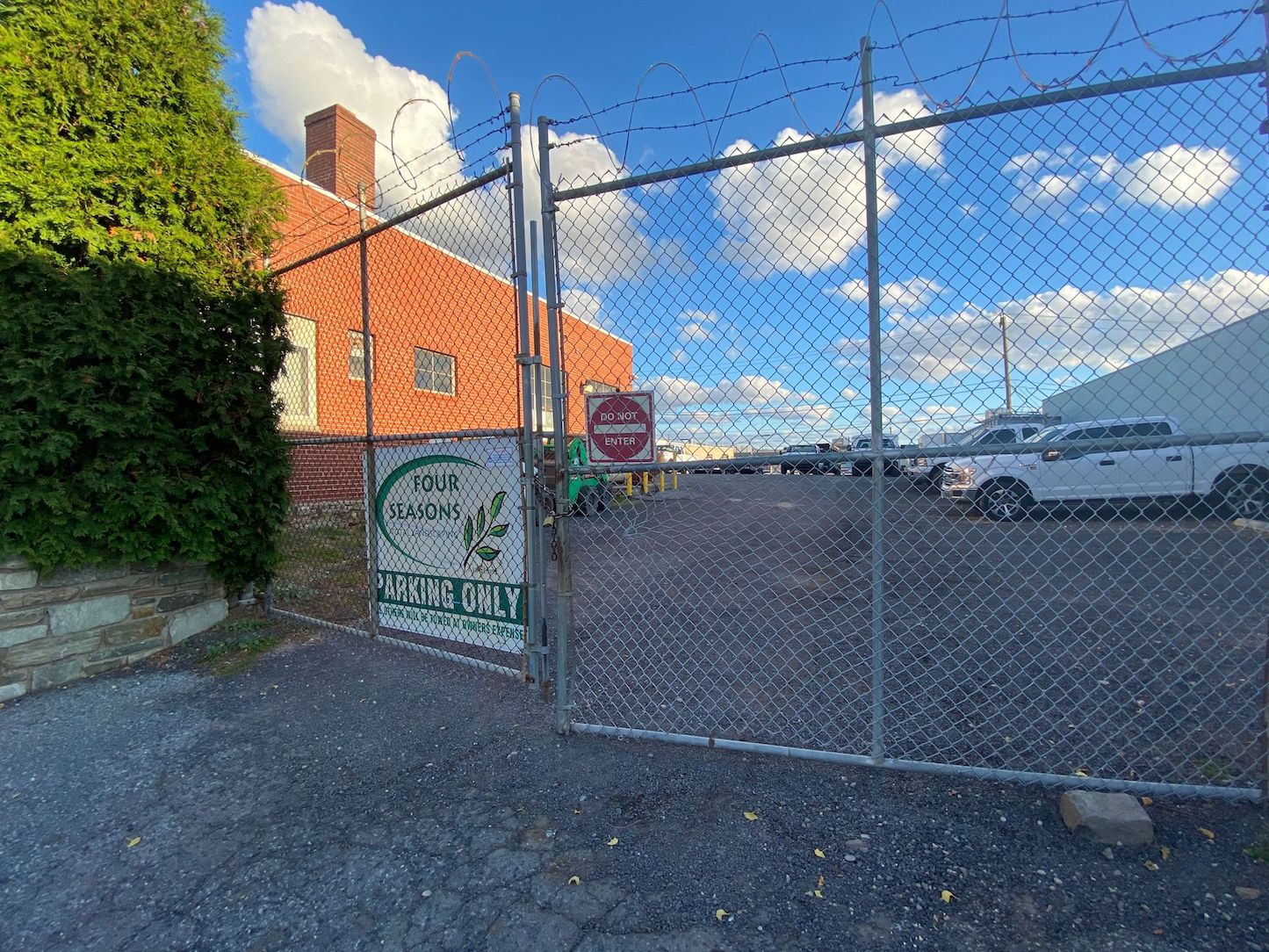 She refuses to answer any further questions, directs the crowd to the website where they can buy t-shirts, hoodies and stickers created by the company in response to their new-found global fame, and gets in her car.

The crowds keep coming. After class, Daniel, 18, and his high school friends drove over 45-minutes to snap their pictures outside Four Seasons Total Landscaping. “It’s a really defining event of the Trump administration: misinformation and miscommunication,” he says. “A pathetic end to a pathetic presidency.”

As we’re talking a thick plume of black smoke rises above Delaware Valley Crematorium Center, on the opposite side of the road. Trump’s presidency is dead, too – despite his refusal to concede. Now, it’s just a question of how much of America gets caught up in the toxic fumes, as his dreams of holding on to power go up in smoke. 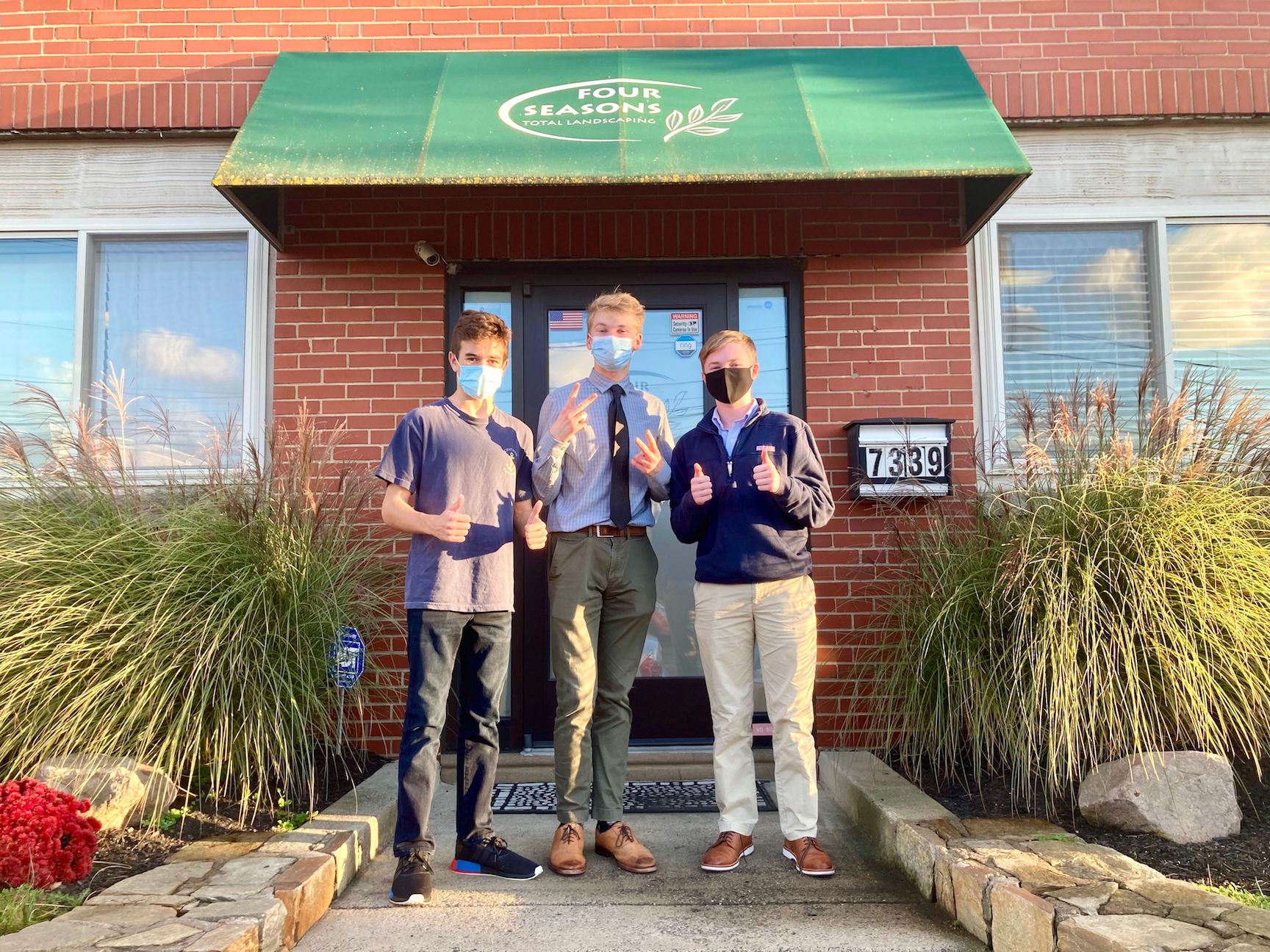 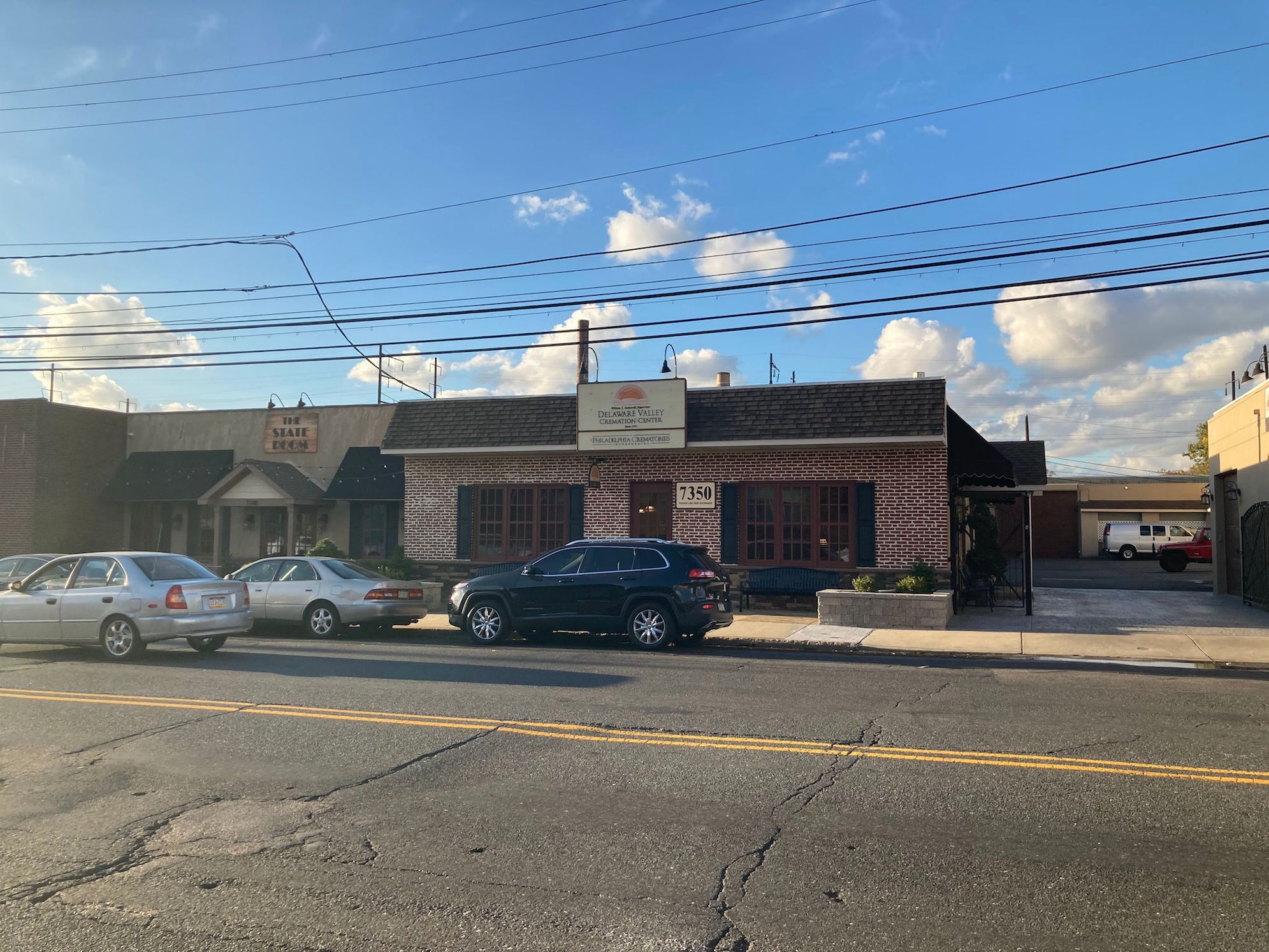 Linkedin
RELATED ARTICLES
OTHER ARTICLES
A series of photos by the late Jerry Dantzic taken in 1957 show a tender side to the iconic Jazz musician.
The author discusses her new memoir, which offers a sobering reflection on the racism and otherness she’s experienced along with a joyful celebration of her culinary heritage.
A new series of photos by Johny Pitts shines a light on communities and subcultures that have all too often been overlooked.
Following the release of his latest album, the rapper talks about finding a new approach to songwriting, attitudes to poverty, and why his music is more than a political statement.
Photographer Bud Glick recounts documenting everyday life in the area, and what it taught him about the Chinese immigrant experience.
Last week, Tower Hamlets council removed its nudity-restricting licensing conditions in a huge win for London’s kink community.