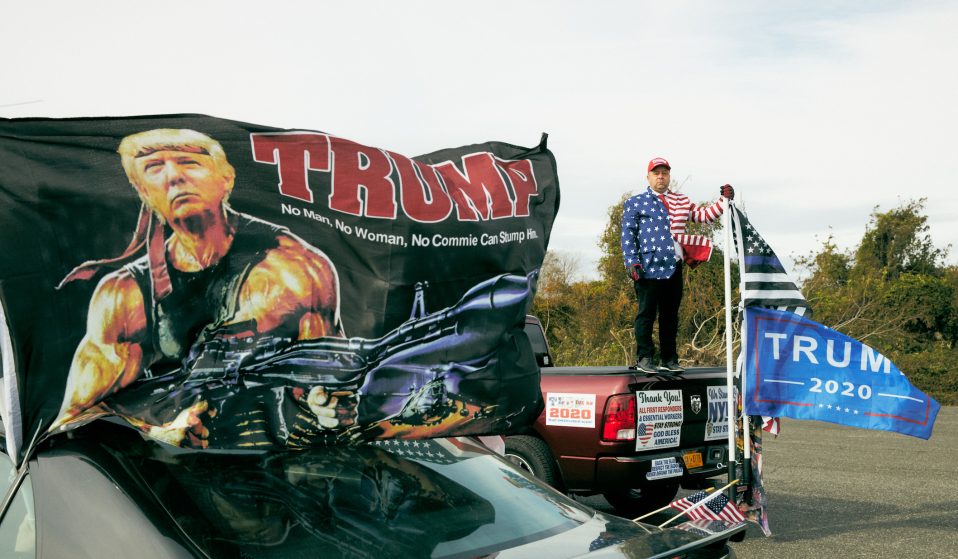 Donald Trump is lagging behind in the polls ahead of this week's election, but yesterday the Make America Great Again vehicle parade was out in force.

Donald Trump is lagging behind in the polls ahead of this week's election, but yesterday the Make America Great Again vehicle parade was out in force, shutting down highways and Mario Cuomo bridge in New York.

It’s early on a cold Sunday morning and as much of New York City is still grappling with its post-halloween hangovers, a convoy of loyal Donald Trump supporters are coming together on an old airfield on the outer fringes of Brooklyn.

Floyd Bennett Field is the staging post for MAGA (Make America Great Again) Drag the Interstate – one of a series of rolling rally events held on highways across the country as part of the MAGA Weekend; a big last push and show of force by the Trump faithful before election day on November 3. Trump has held his base close ever since his unexpected victory in 2016. But amid COVID-19, Trump has alienated many of the voters he will need to win again. 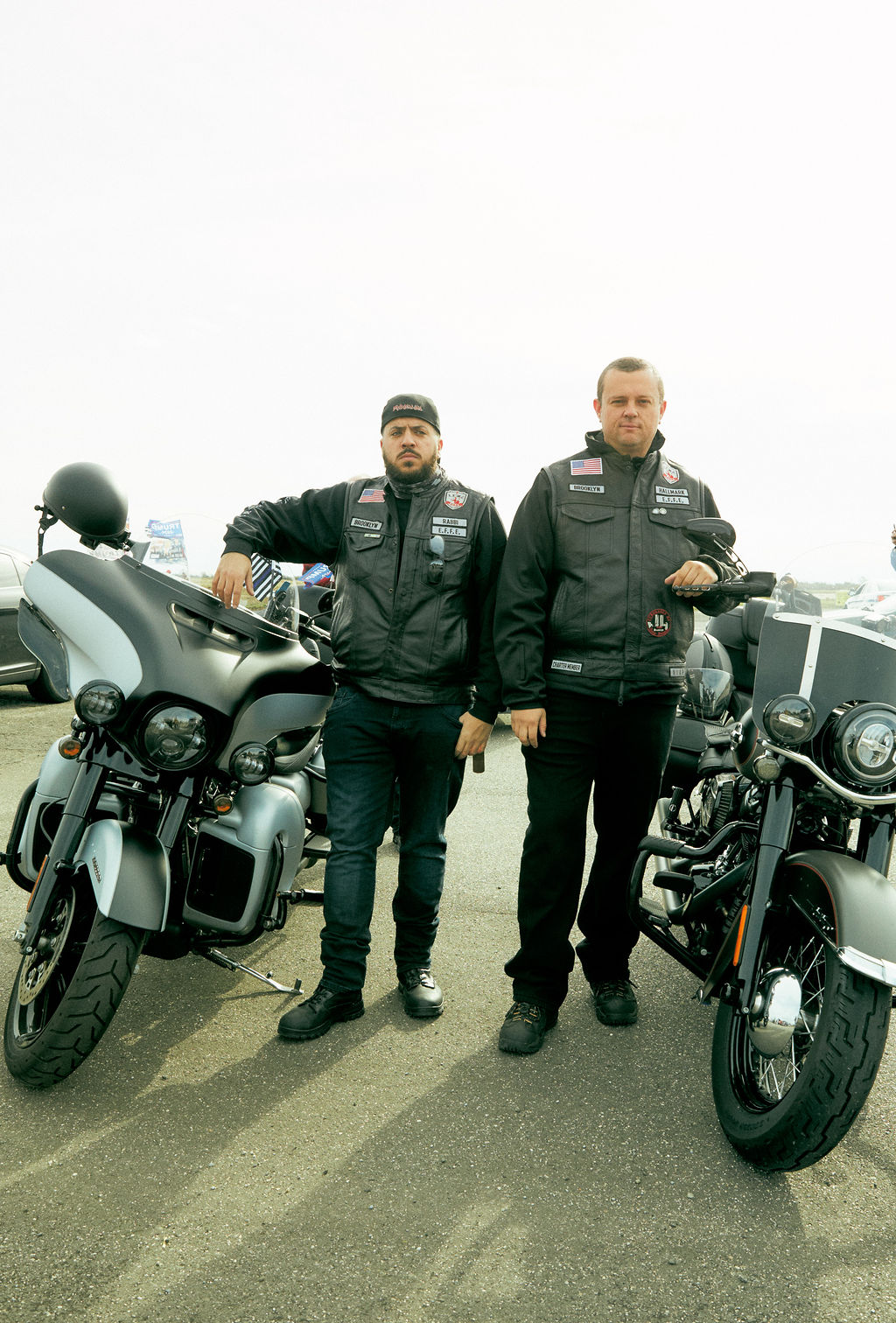 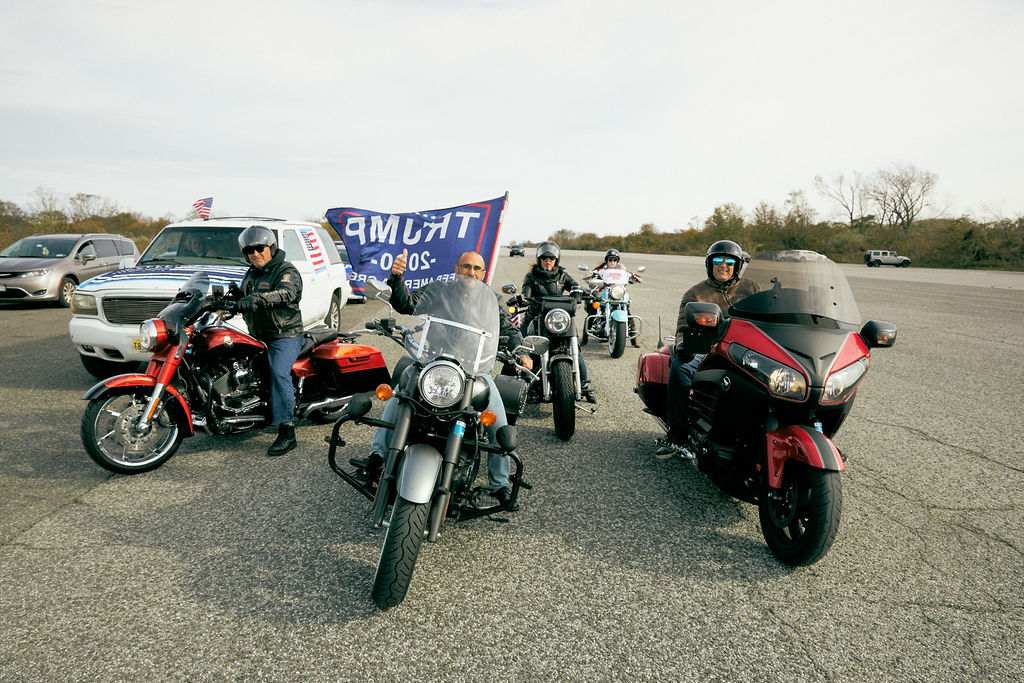 Although the results of 2016 are a bitter reminder to take all polls with a pinch of salt, most data suggests Trump will be soundly defeated by his Democratic opponent Joe Biden – not just here in New York State, which is loyally blue, but in most of the pivotal swing states, too. The Trump circus seems to be struggling to draw people to the voting booths this time around, but today’s gathering has succeeded in generating a significant police presence. At least fifteen NYPD cruisers and vans are distributed between the main road and the staging area.

Although, that’s not so surprising. Similar events have descended into violence when confronted by counter-protesters – such as at Manhattan’s Times Square a week ago. To keep participants safe, the MAGA Drag’s organisers published ‘Rules of Engagement’ online, which, alongside banning “racist symbols or flags on their person or vehicle (Nazi symbols, Confederate Flag, etc.)” recommends that: “Each vehicle should have at least two people – one driver and one spotter. Stay Alert to Stay Alive… Lethal force is a LAST RESORT ONLY.”

Today’s drive-along rally is not only about Trump, but also demonstrating support for law enforcement – and the MAGA Drag-ers are certainly vocal about that. Just outside the staging area, two NYPD officers are standing next to their patrol cruiser, watching vehicles stream onto the airfield. 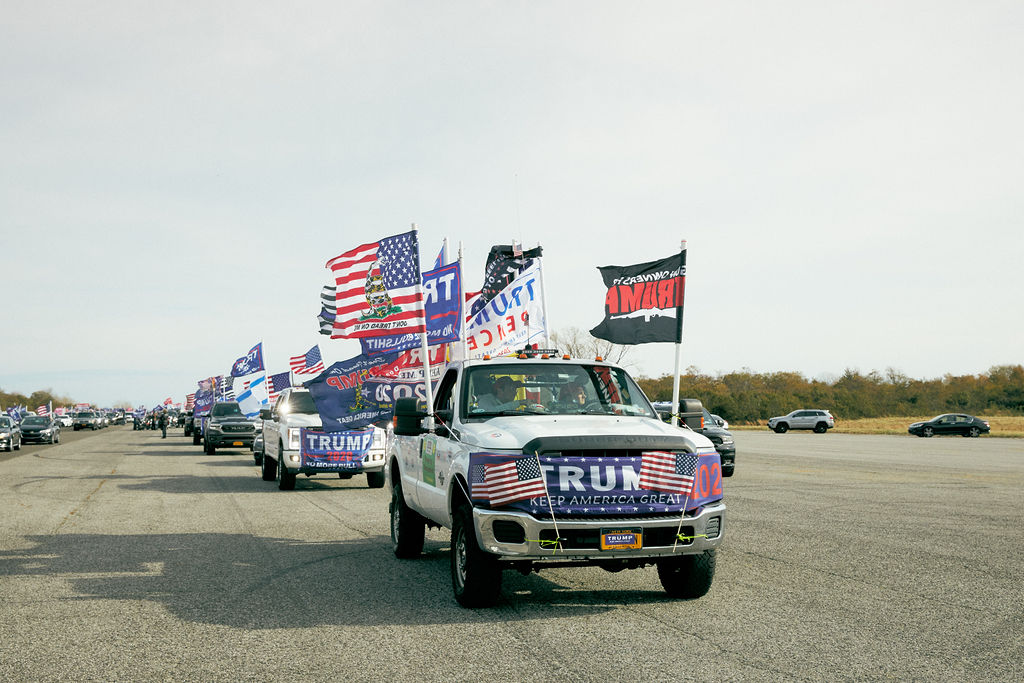 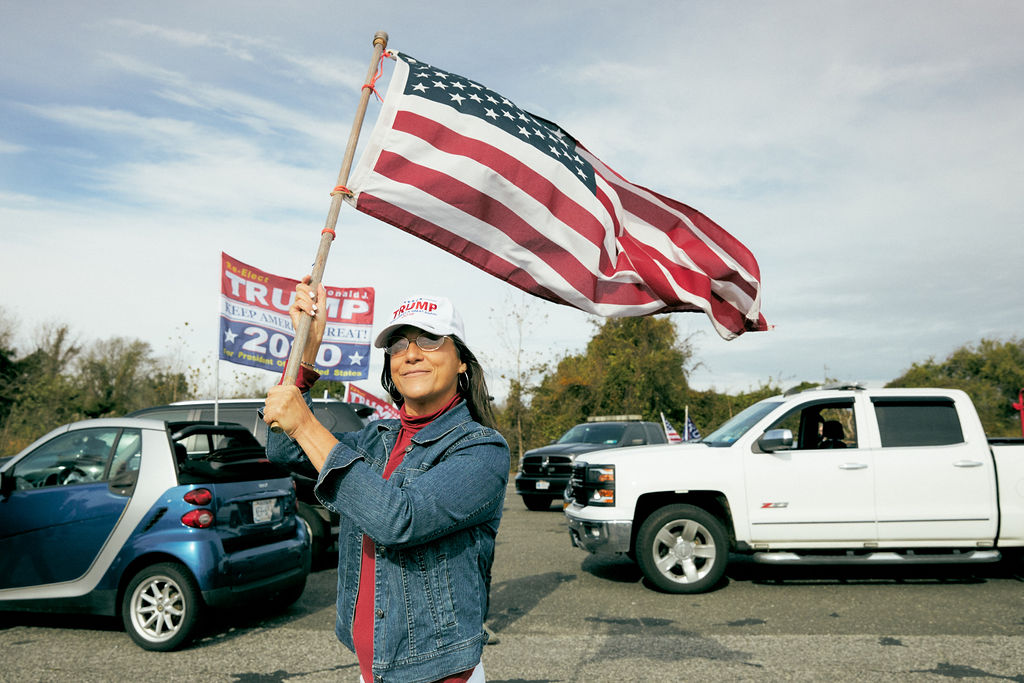 An enormous white Dodge pick-up truck rolls by with a ‘Trump 2020: Keep America Great!’ flag draped across its fender and an array of bald eagle, Statue of Liberty, Trump 2020 and American flags flutter in the wind from the truck bed. The driver rolls down his window as he passes the officers, bellowing “Back the blue! Back the blue!”, punching his fist in the air. The officers smile and nod in approval.

Trump’s supporters might be significantly outnumbered in Brooklyn and across New York State – which has voted for the Democratic candidate in every presidential election since 1988 – but a carnival atmosphere is brewing as the airfield fills up with hundreds of massive pickups, motorbikes and the odd vintage Chevrolet.

Almost all are decked out in flags, which feature Trump photoshopped as Rambo or standing astride a tank carrying a giant American flag with ‘You’re fired!’ written on its barrel, as an eagle toting a machine gun flies in front. His toxic politics aside, Trump has been a highly effective politician in the sense that he can energise his base like few others – and today his base is energised as fuck.

“If they were doing this for Biden, there would be three cop cars here and that would be about it,” explains Judah, wearing a cowboy hat inside his metallic-blue Jeep Wrangler. “The enthusiasm is too great across the country. Even people who tell you they’re voting Democrat are not, they’re just afraid to tell you who they’re really voting for.” 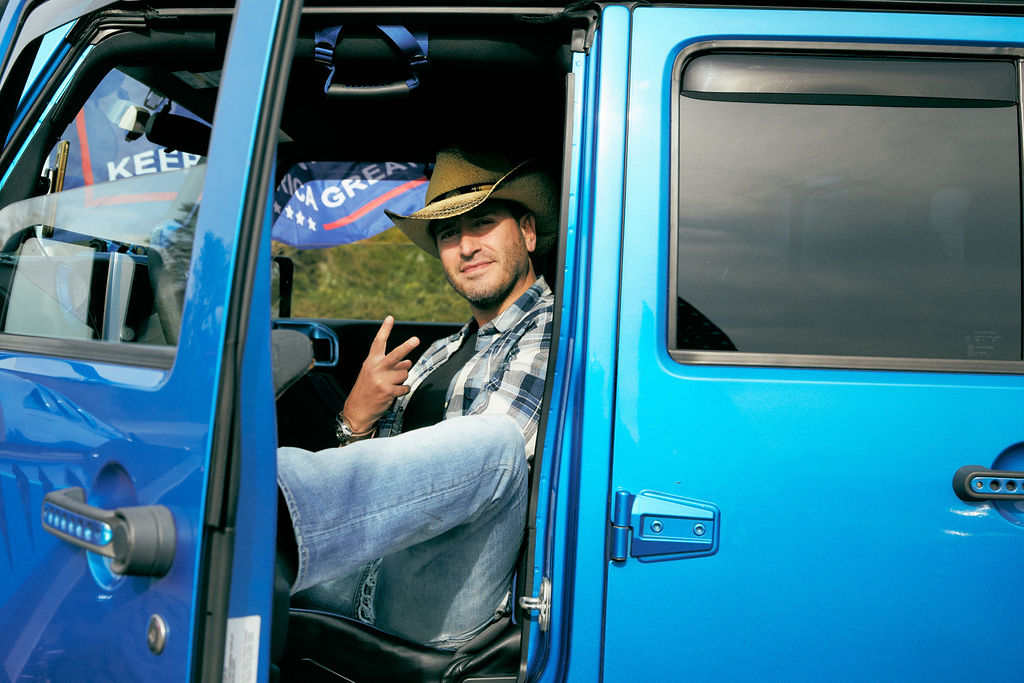 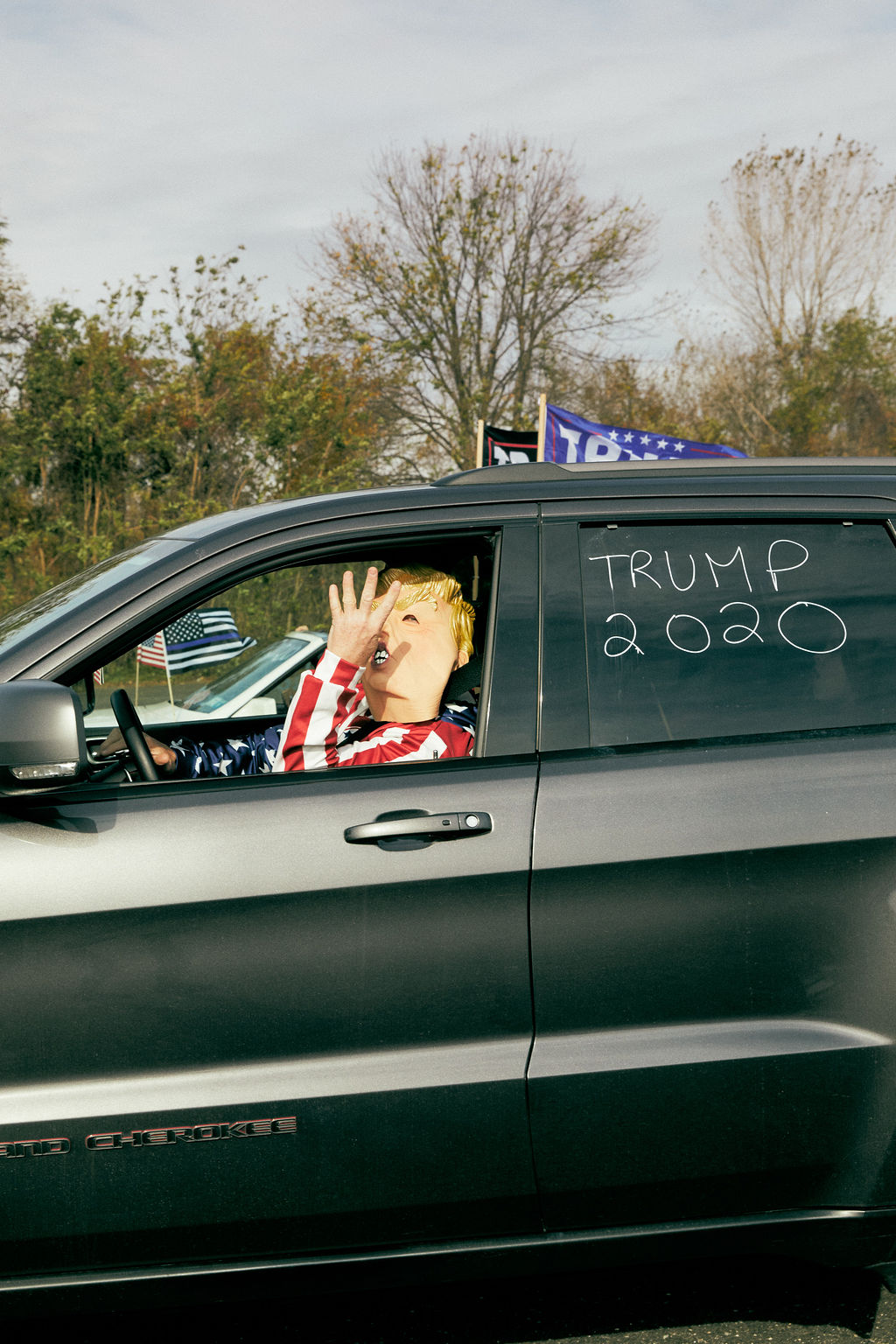 ‘Sleepy Joe’ may fail to match Trump’s nefarious charisma or his barnstorming rallies, but then, Biden has responded to coronavirus by largely shunning rallies and mass events in favour of online campaigning and a strong-ground game in pivotal districts.

Meanwhile, Trump’s complacency and chaotic mishandling of the pandemic has seen a staggering 231,000 American lives lost. It’s likely biggest obstacle to winning a second term, and why he has haemorrhaged support from key voting blocs, such as suburban women and older voters.

In New York state alone, over 33,000 people have died from COVID-19. Yet, on the airstrip there are very few masks to be seen, even though they are compulsory in public spaces. Even people who approach drivers in their cars with a mask on are met with a stand-offish reception. It’s clear that today, the pandemic isn’t at the forefront of people’s minds.

“I’m out here supporting the president, supporting law enforcement, supporting my community, supporting fellow conservatives and supporting freedom in this country,” the unmasked Judah explains, echoing what many others say throughout the day. “Regular Americans who know what freedom is are voting for Trump, no question.”

At the front of the convoy, a tractor-like SUV jacked up high on its wheels and towering above all other vehicles, is blasting out Aerosmith’s ‘Dream On’ from huge speaker stacks. Fitting, perhaps. But then maybe those who think 2020 will mark the end of the Trump era are the ones still dreaming. The polls got it so wrong last time. And even if Trump does lose, he has already indicated that he won’t commit to a peaceful transition of power. 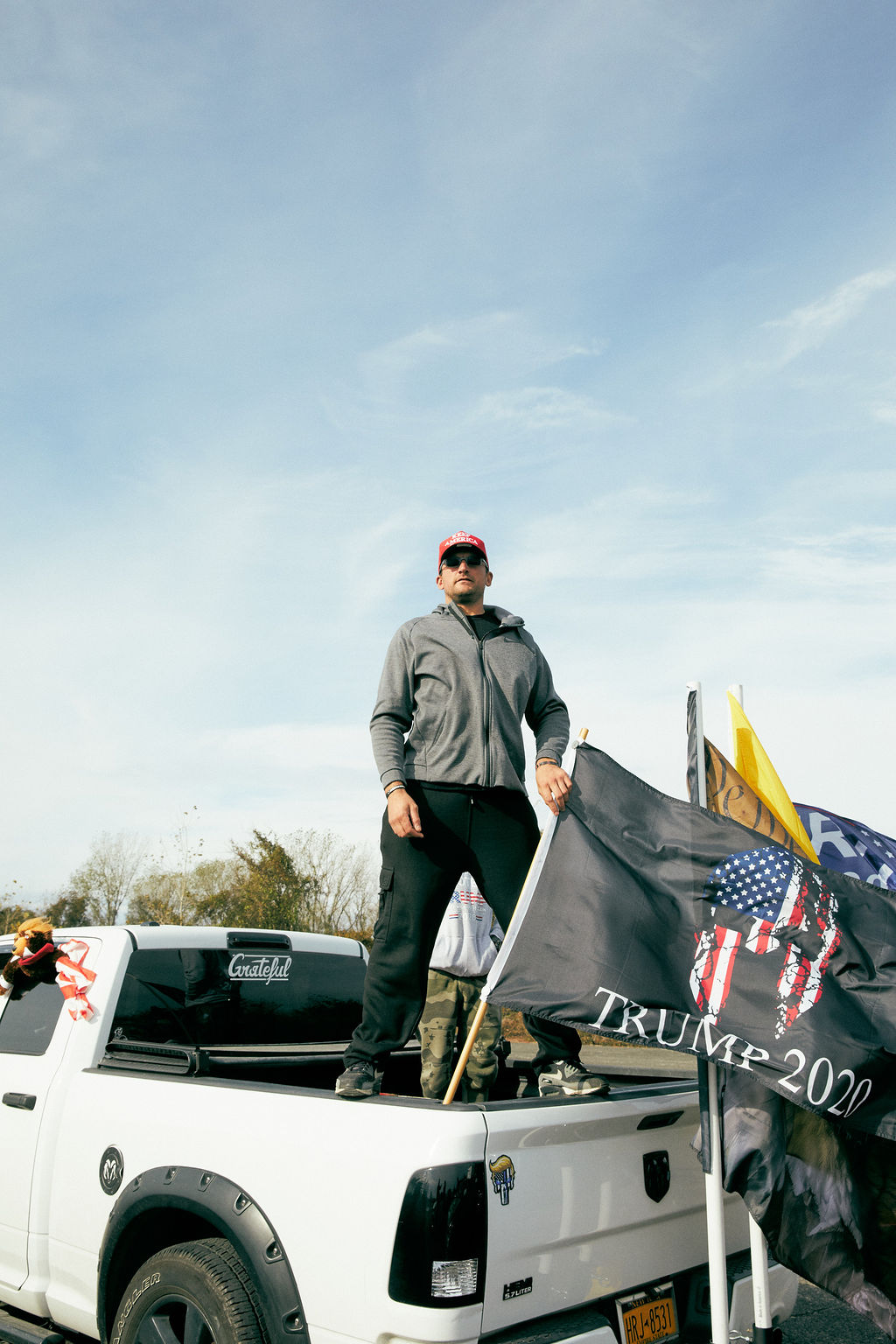 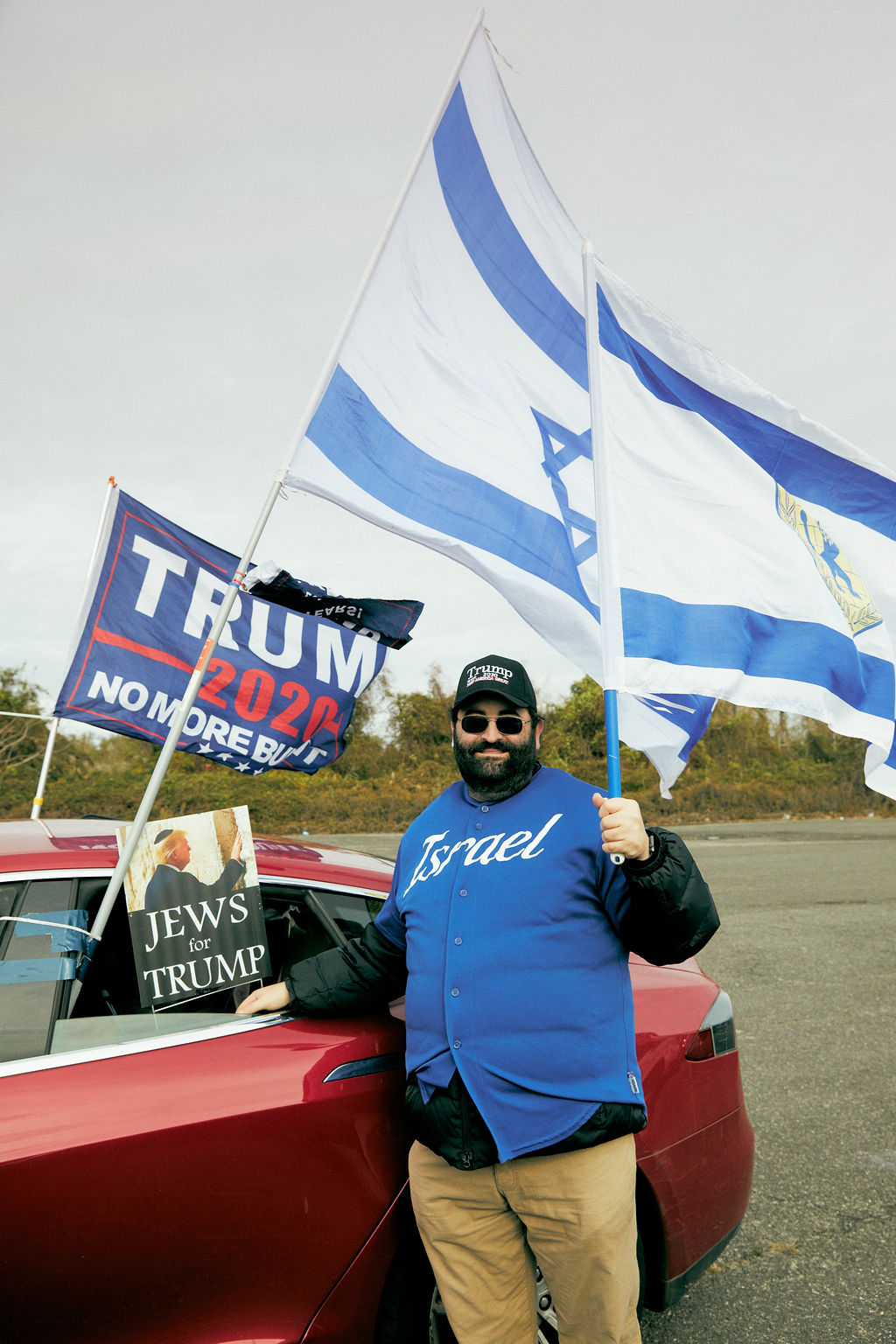 Yet, everybody here is adamant the only risk of violence will come from the other side. “If Biden wins that was God’s choice, that’s fine, we move on,” explains Sara, who has been walking between the cars, waving a giant American flag over her head. “But if Trump wins, they [the Democrats] are going to go ballistic and that’s the difference. We’re OK. They go mental.”

“People who really believe in the Torah and the Bible know this isn’t about Trump,” she continues. “We know the shit’s going to hit the fan very soon but we’re on the side of truth. We know it’s going to be bad but it has to be this way. God runs the world, for better or worse.

It’s time for the convoy to make its way out onto the interstate highway. As the swarm of vehicles leaves the airstrip, an older guy in a stars and stripes suit and a red Trump cap is standing on the back of his parked pickup, shouting for everyone to “Hit the horn for Trump!” as they pass him.

It’s unclear whether the short-lived gridlock they create will convince anyone stuck in traffic to cast their vote in Trump’s direction. But then that’s American politics in 2020: a hypnotic spectacle that makes tons of noise, but nobody’s going anywhere fast. 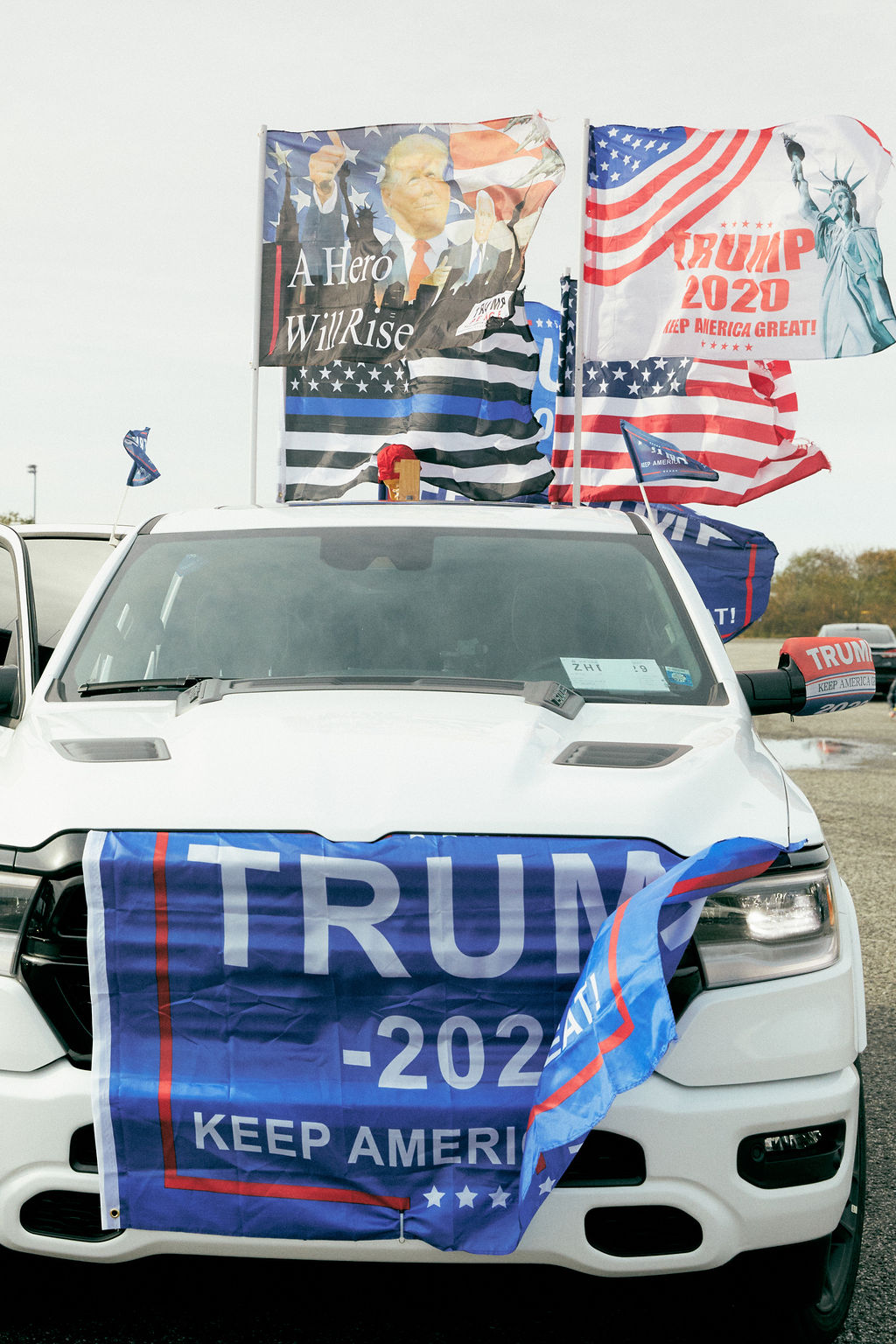 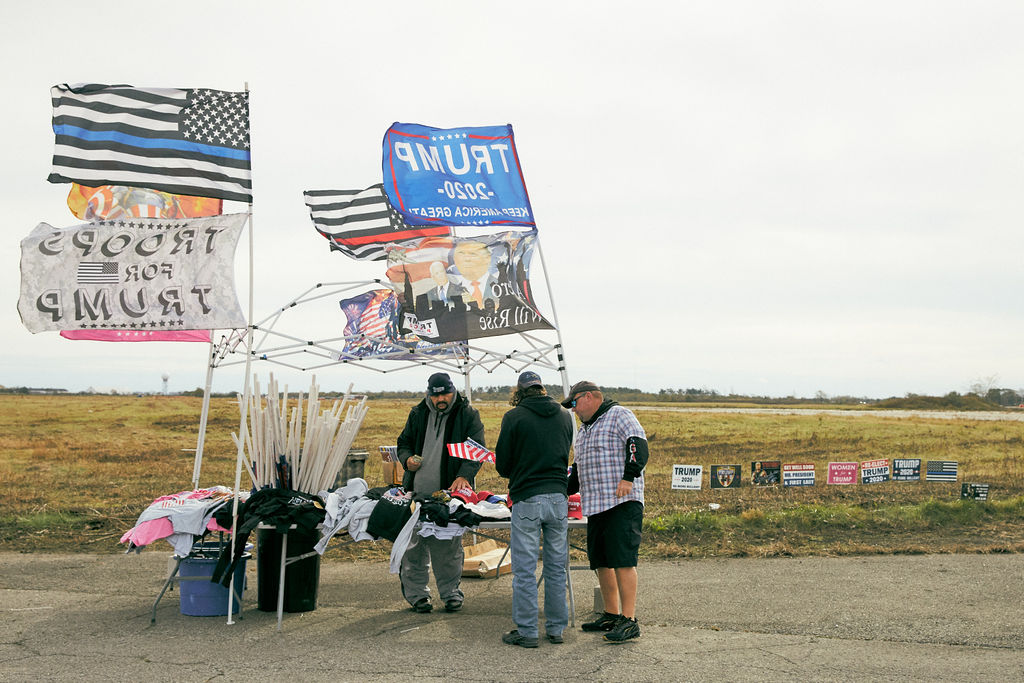 Linkedin
RELATED ARTICLES
OTHER ARTICLES
In our first OFFF Dispatch piece, the Arce Studio founder shares her tips on standing out from the crowd.
While protests over abortion rights rage in the US, access to abortion services is still almost nonexistent in parts of the UK.
To mark the anniversary of the mass trespass of Kinder Scout, a group of hikers came together with the intent of creating a new, fully inclusive culture for rural spaces.
A new documentary explores the government’s efforts to quash the protest movements of the late ‘60s by any means necessary.
New legislation is set to make it more difficult to hold Israel accountable for its human rights abuses.
In the latest OFFF Dispatch, the enigmatic designer dives into his process, connecting the dots between his unique and varied creative output.