News & Politics / Stop applauding a rapist for admitting he raped someone 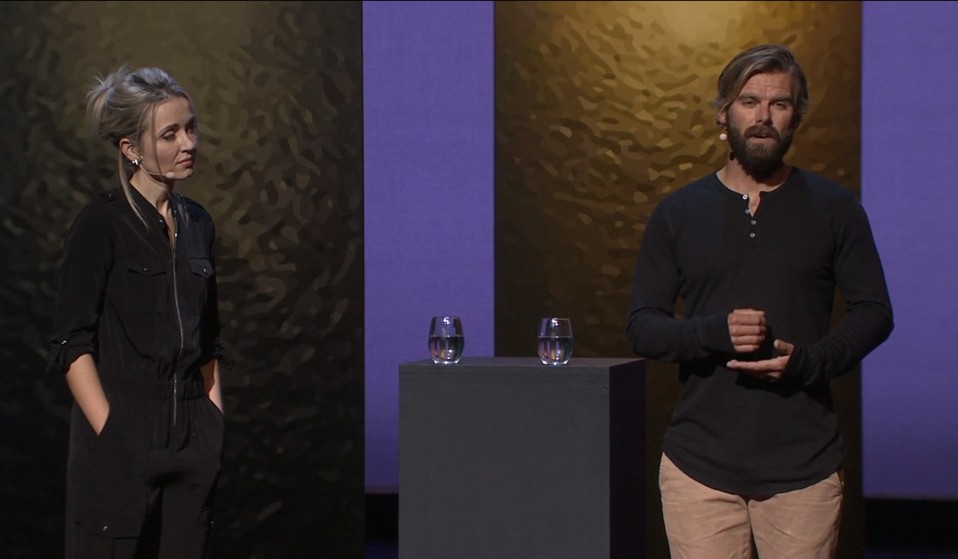 A worrying precedent is set in the viral TED Talk and upcoming book starring a survivor of rape and the man who abused her.

A worrying precedent is set in the viral TED Talk and upcoming book starring a survivor of rape and the man who abused her; if a rapist shows up at your door it's their right to be forgiven. Now he's being given a platform at an International Women's Day event in London. Liv Wynter explains her issue with the idea of a 'Good' and 'Bad' survivor.

My Facebook timeline can often be a hostile place. For every uplifting shared video and inspiring call to arms, there is bound to be something that is upsetting, triggering and difficult for me to deal with.

Recently, the story of Thordis Elva and her rapist Tom Stranger appeared as the top post in every newsfeed refresh, neatly packaged into a TTD talk and a launch of their co-produced book. For those who missed it, Tom Stranger raped his then-girlfriend Thordis Elva during high school. Thordis reached out to Tom years later through a series of letters, and they eventually arranged to meet.

Now they’ve launched South of Forgiveness, the book plugged in the talk and currently touring the literary circuit. The book itself looks at Thordis’ rape from “both perspectives”, that of the perpetrator and the survivor, now given equal weight, space and time.

I’m a survivor of rape and domestic violence, and I’m now involved in activism in my daily life surrounding these themes. This video caused me to have an ethical and emotional dilemma. The survivor in me is furious, and unashamedly so. How dare a rapist be platformed in this way? Be congratulated for his bravery and for his ability, years later, to admit that what he did was wrong. Is he profiting financially from this? The project’s website suggests Tom will donate a portion of any proceeds from South of Forgiveness to charity.

Even if he isn’t making huge amount cold hard cash, what does he become in the form of cultural capital? How many TV shows and panel discussions will he be invited to? How many times will he describe the act of raping a woman and then be praised and platformed?

There is a reward system in place here, whether conscious or not. We have created the ‘Good Rapist’. One who has admitted guilt, and is therefore absolved. His experience seemingly as valuable as the survivor’s.

I have my fears about the trickle down affect of this man’s success story, I can already see misogynists sharing this story with descriptions of what they believe a ‘Good Survivor’ looks like. I fear for Tom’s pedastooling by Men’s Rights Activists who believe a woman’s body is theirs to own and use as they see fit. I fear the people who will send this video to their friends who have been raped. Mostly, I fear the rapists who will be encouraged to contact their victims off the back of this video.

It’s important to remember that rape and sexual violence doesn’t exist in a vacuum. Under the eyes of capitalism and misogyny, there is the ‘Good Rapist’ – characteristics may include a sense of remorse or straight up denial, a good education, white skin and rich parents. We regularly encounter rapist poster boys, remember Brock Turner, the Stanford rapist? His parents, and most of America, were fed his story through a media that refused to call him what he was. We watched his parents describe how Brock’s attack was “20-minutes of action” that ruined his swimming career. The press focused on whether he would be allowed to swim again. You get the idea.

Alongside this, there is also a ‘Good Survivor’. A ‘Good Survivor’ is one who is emotionally stable, who has ‘recovered’ from trauma, who has made peace with their violent experience. This survivor is quiet, well behaved, never says the word rape out loud in public, and understands that her case should and will be treated as though it is a bizarre anomaly, not a daily occurrence. A ‘Good Survivor’ forgives their rapist. The best survivor can do it publicly, and encourage other survivors to do the same.

Although Thordis expresses she does not want this video to represent a model of survival, it becomes that by default, and it dangerously represents a model that not only suits but benefits the perpetrator. He is free from punishment, profiting from the proceeds, and is free from feeling guilt or shame.

In activist communities, we attempt to utilise transformative justice. Transformative justice is the idea that instead of using flawed systems of punishment such as prison and detention centres, communities hold perpetrators and wrongdoers accountable. The community engages in dialogue with the perpetrator and tries to educate them and work through what has happened, in an attempt to prevent them from hurting others again. This system is the closest thing we have to a refusal to engage with a police state, but it requires a community that centralises and supports the survivor.

Am I to look at the case of Thordis and Tom as a successful story of transformative justice? Should I not be applauding?

Tom is only taking action because Thordis asked him to. His perspective on what happened continues to be given weight. Tom’s accountability has been applied to him, through a huge amount of emotional labour from Thordis. I don’t believe Tom was unaware he was a rapist until Thordis explained this to him. All he’s done is accepted he did something wrong, and so what?

Within many communities now there is a dangerous attitude visible, an attitude where people believe that simply by admitting their wrongdoing, they have done enough.

Transformative justice asks that those who are the perpetrators must not only deal with what they have done and the hurt they have caused, but must also do serious soul searching about what caused them to do it. Is Tom ready to dig deep into the murky waters of misogyny that led him to his attack?

The thing is, admitting you fucked up is beneficial, but it is not radical. What’s radical is the work that goes in after, the attempts to better yourself and attempts to go out of your way to make others around you feel safe. Perhaps Tom is doing this, and paving the way for reform of rapists. Perhaps Tom, like so many others, found his performance of reform comes with a financial and social reward.

Moreover, if I’m honest, I’ve not forgiven my abuser, my rapist. I wholeheartedly reject the idea that the only way a survivor can exist happily is through forgiveness. Sometimes that’s just not possible, and right now it’s not for me. Fury, anger and rage are intense, justified emotions that should be explored and expressed. Right now I am feeling them, and often do.

I know, without doubt, that if I could seek revenge on my rapist I would. Far from sharing a stage with him, if the law allowed me to I might well break his legs. To make him feel pain, to make him feel unsafe. I don’t hope that the men who’ve used violence find fulfilment and happiness, I hope they’re broken, desperate and alone. I want them to feel fear. I won’t apologise for not being the ‘Good Survivor’. If the men who abused me turned up tomorrow and asked to write a book with me, there’d be fists and yells of fuck off.

If Thordis has found peace through reconciling with her rapist, that is excellent news. As for Tom, a rapist who got away with it and has lucked out with a book deal? To be honest I’m just not buying it.

Liv Wynter is an artist, performer and activist based in London. `You can follow Liv on Twitter.

Linkedin
RELATED ARTICLES
OTHER ARTICLES
Mass crustacean die-offs in the North East have led a community of fishermen to take action to save their seas.
After fleeing the war in Ukraine, people are finding it impossible to secure affordable and decent housing in the UK.
A new film from Berghaus traces the story of Adam Raja, who left behind a turbulent upbringing to discover the healing power of climbing.
Campaigners reflect on what the supreme court’s decision to allow buffer zones in NI means for the future of reproductive rights in the UK.
Jeffrey Henson Scales intimate portraits and protest images of the BPP and its leaders offer a rare insight into organisation at a time of societal upheaval.
The first-generation graffiti artist reflects on the tagging’s emergence as an art form and the players who pushed the medium forward.