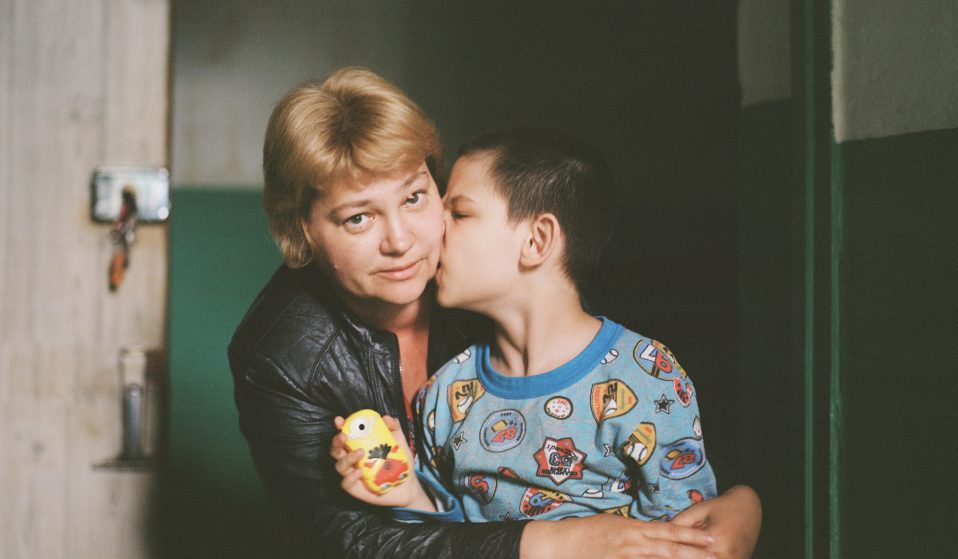 Photojournalist Fiora Garenzi spoke with people still living in Eastern Ukraine, an area which seen some of the heaviest fighting since the war began.

Photojournalist Fiora Garenzi spoke with people still living in Eastern Ukraine, an area which seen some of the heaviest fighting since the war began.

The Russian war against Ukraine has entered its sixth month, and in the eastern Donbas region – scene to some of the heaviest fighting – the violence is still ongoing.

On 21 February, Russian President Vladimir Putin set the stage for the full-scale invasion by recognising separatist-controlled areas in Luhansk and Donetsk – which make up the Donbas – as independent and ordering Russian military forces there under what he called a ‘peacekeeping’ mission.

In the months since, Russia has scaled back the ambitions of its invasion and refocused its military efforts on eastern Ukraine. It has declared that capturing the Donbas is one of its priorities and has been slowly bombarding and then capturing towns. Russia now holds about 75 per cent of the region.

People living in the Donbas have watched life deteriorate drastically, with no end to the horrors in sight. They share their experiences, along with their hopes and fears, below.

“I was born in Bakhmut and have lived there all my life. I have lived through almost all the conflicts of the last century and have come through them, but today I am afraid. No one knows what will happen and how much each side, Ukraine and Russia, is willing to sacrifice those who chose to stay in Donbas to win our land. I feel more in danger than ever, even during the Second World War I didn’t feel that the value of my life was so discredited.” 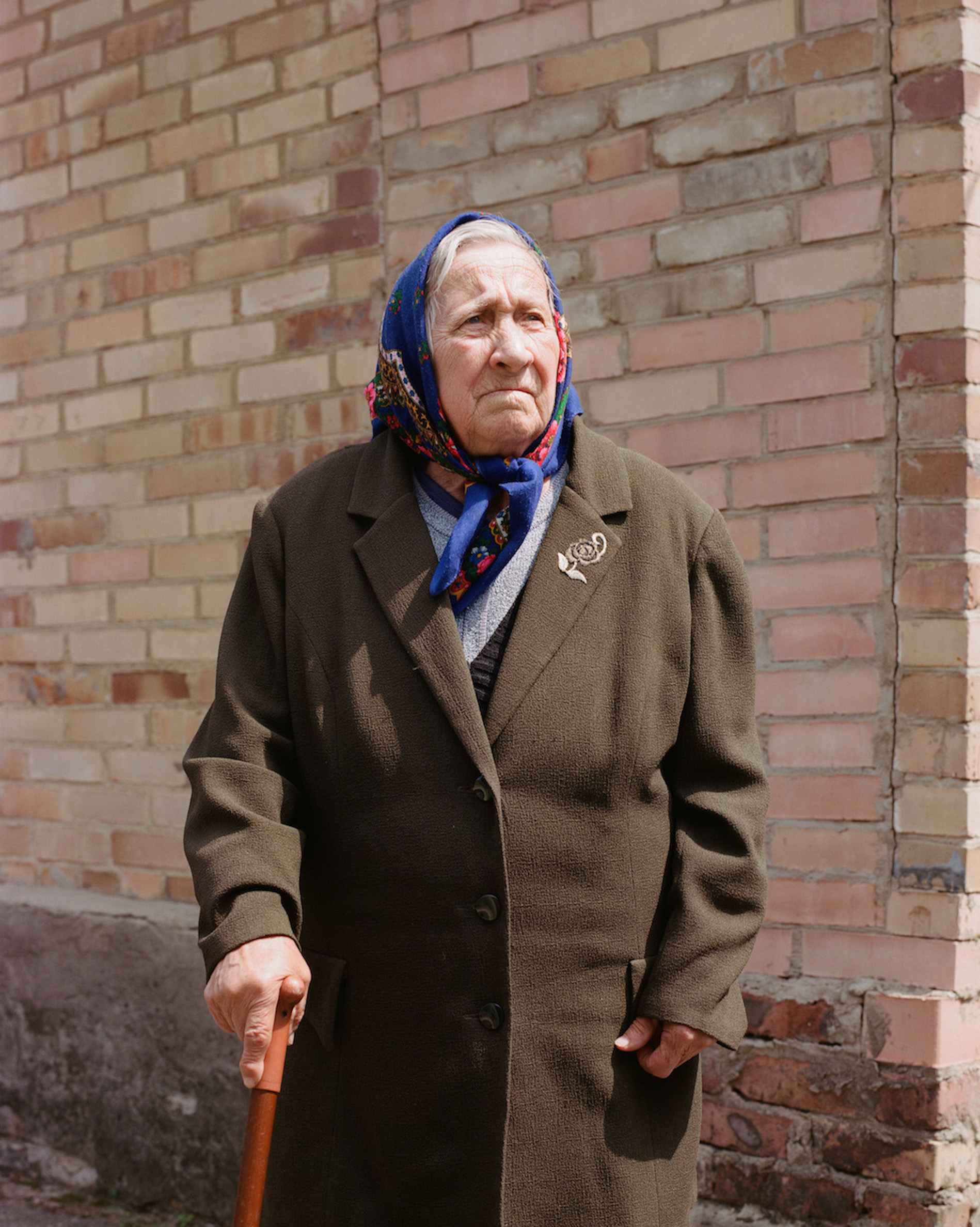 “We are best friends both call Ola in high school, in the second year. Since the attacks in February, the classes have been held remotely, in video, but most of those who were in class with us cannot attend, because they are away or they have other more important things to worry about. Like everyone else here, we want peace, of course, but unlike our parents, we want Ukraine to remain Ukraine even if we have to lose a lot.

“Our parents are exhausted from years of conflict, but our generation values Ukrainian identity so much that they are willing to fight to keep Donbas Ukrainian. If Russia takes our land, we will resist and if we have to resign we will leave, but our identity will remain as it has always been.” 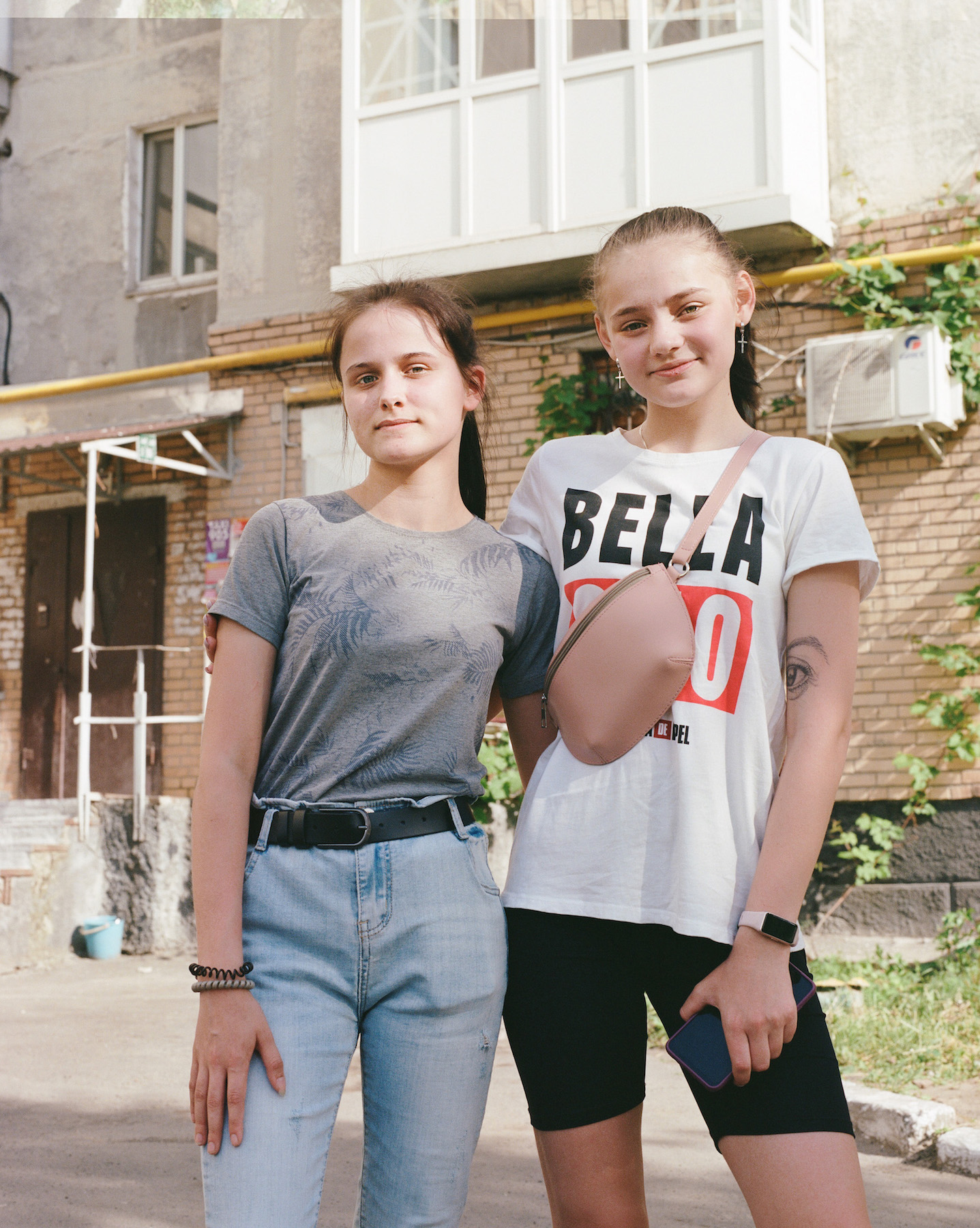 “A few days ago, my neighbours’ building was bombed. There were five of them inside at the time of the explosion, and three of the bodies have still not been brought out. The body of one of the neighbours and her son was pulled out, they were found crushed by the rubble, huddled together. The bodies of the other three people lie there, under the rubble, in this street where we walk every day, next to this bench where we sit. You don’t walk on the rubble of the building, it would be like walking on their grave.” 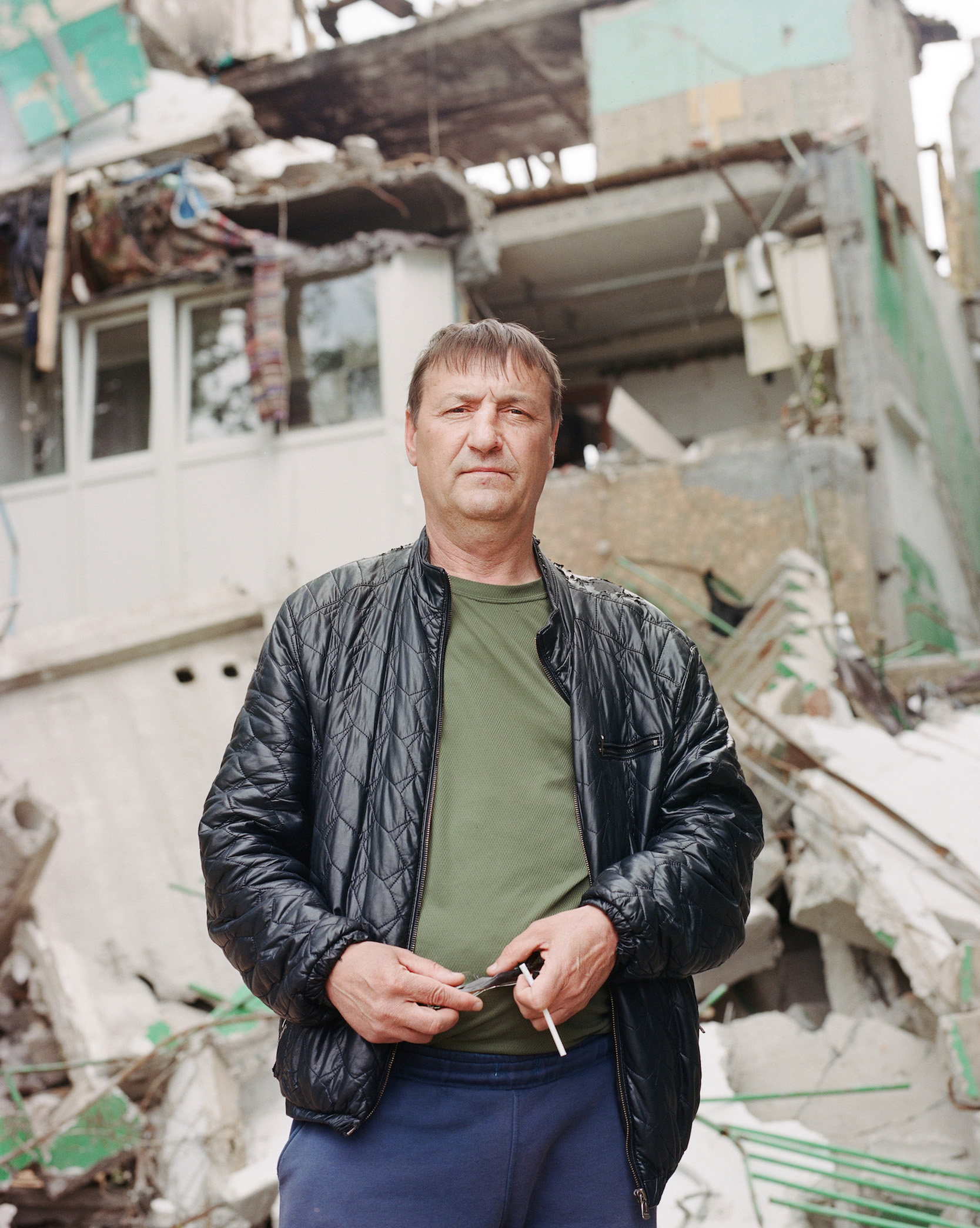 “My husband, my son and I are the last inhabitants of our building, all the others have left. There is no more electricity and there is hardly any gas, so we cook outside, we make fires at the bottom of the building. We have three sons, one is in Lviv, he was evacuated thanks to his work, the second is still in Sloviansk even though it is dangerous, and the last one stayed here with us, after sending his two daughters and his wife to the West of Ukraine to keep them safe. He didn’t want to leave us alone even though we told him to leave.” 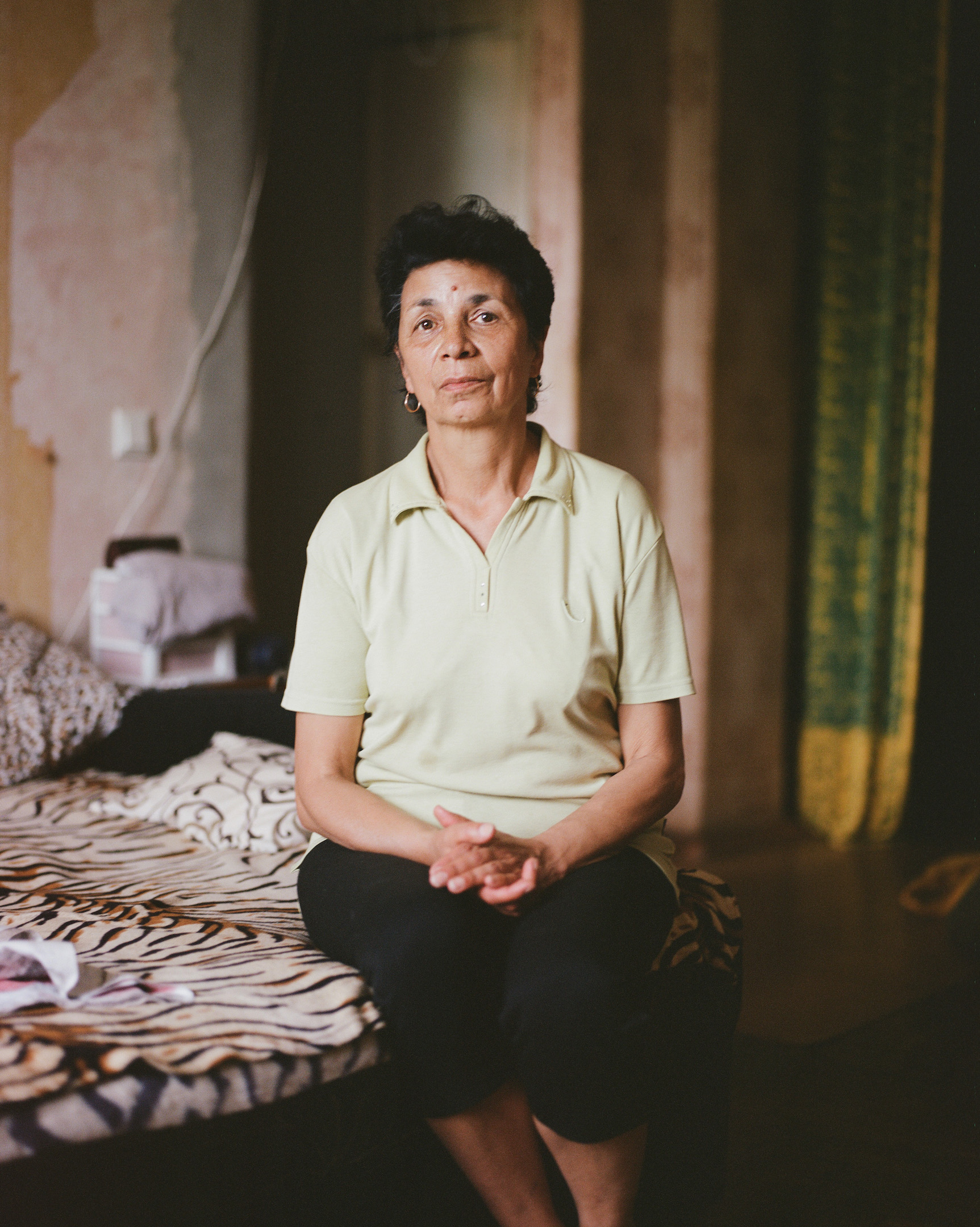 “When the sirens sound, I never go to the shelters, they are graves. I am no more afraid today than I was a few months ago, in Donbas we have always been threatened. I lost my job, I lost everything that made my life, I will not give up my land. Why would I want to leave? I was born here, where would I go? What would I do elsewhere? I will stay here no matter what.” 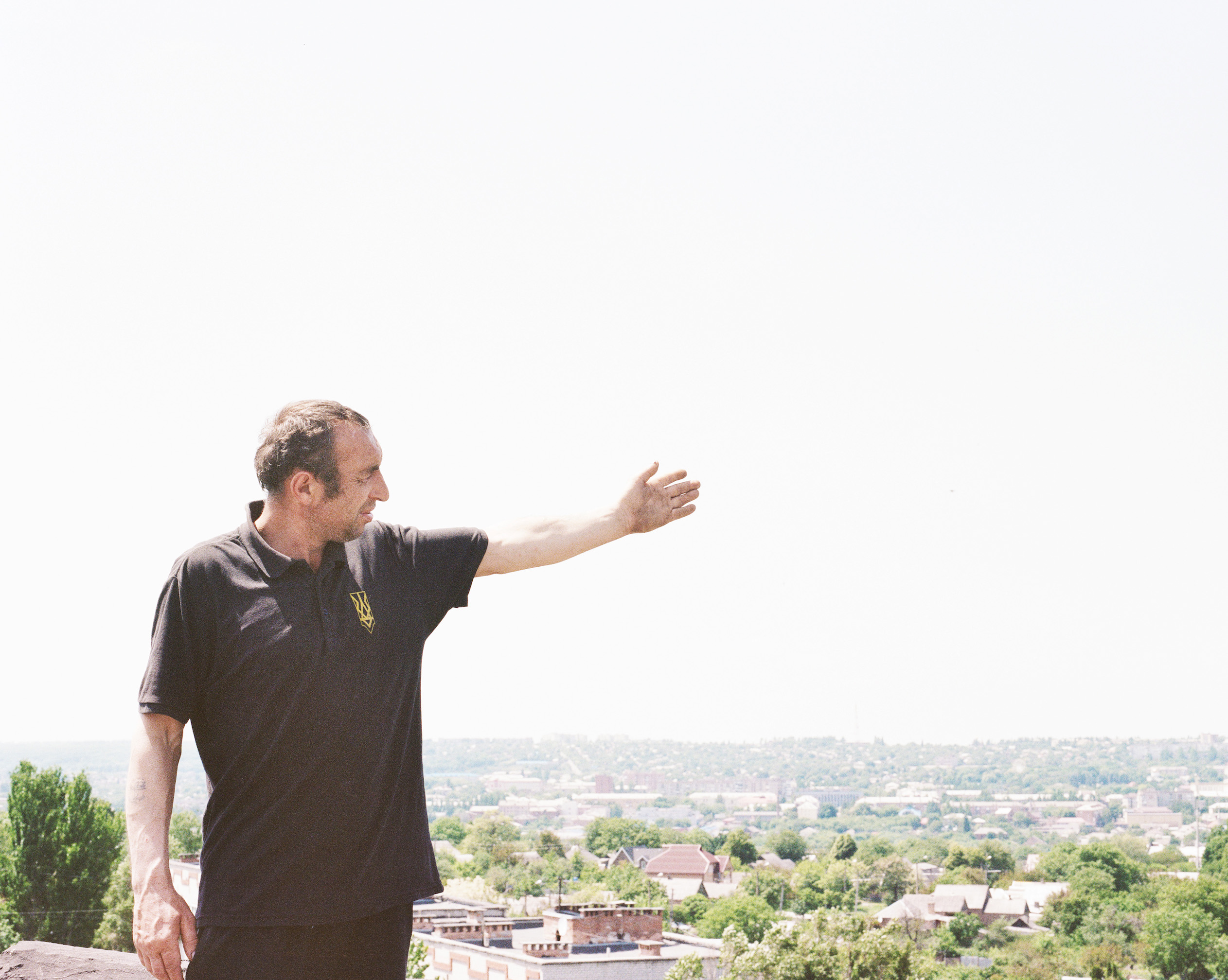 Tania, 25 (pictured with her mother Lena)

“My name is Tania, I am 25 years old. Since the first bombings, many people in my neighbourhood, Zabarkhmouta, have fled. Soon, soldiers arrived in the area and started occupying civilians’ homes, sometimes without their consent. For those who live around them, it is terrifying. You are afraid that the houses occupied by the soldiers will be targeted and at the same time the whole area will be destroyed. You feel trapped in the middle of this conflict.

“I only wish that this war would end and that all my relatives would be fine. I want to be able to travel, I want to be free and I want to be able to look forward to the future without worrying. In Ukraine, we have no freedom of expression and we are not listened to under our government. We are being left behind. I’m afraid of the bombings, I’m afraid of armed combat coming to our streets. Living in a country at war means barely surviving, being depressed and hopeless on a daily basis.” 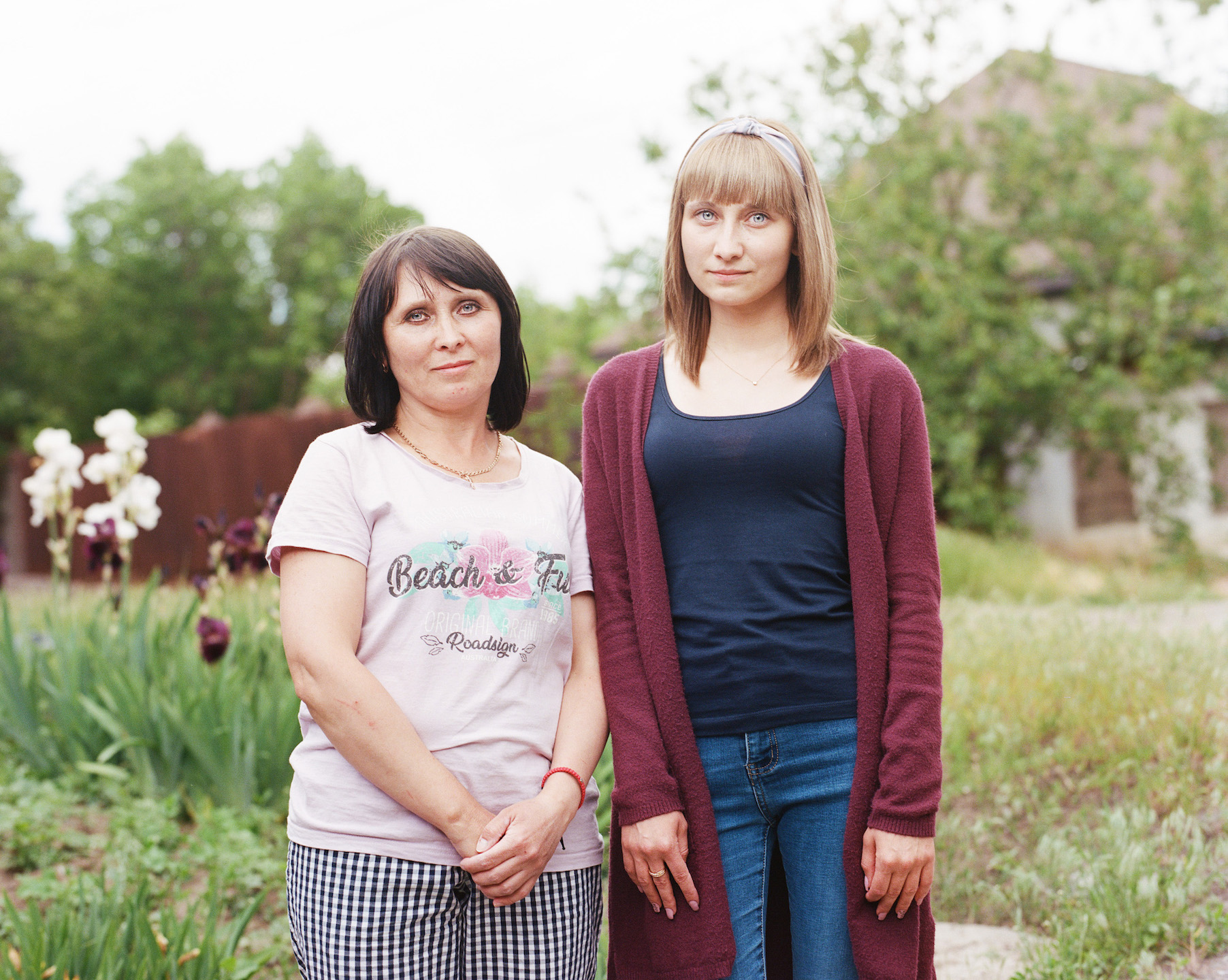 “I live in one of the high buildings in the city of Bakhmut, I cover the windows with cloths and cardboard, and I don’t turn on the lights when we are lucky enough to have electricity, so as not to risk being targeted by a missile. I know it’s dangerous to want to stay, but what’s the point of living holed up in a bunker, not seeing the light of day. I don’t want to live as if I were already dead.” 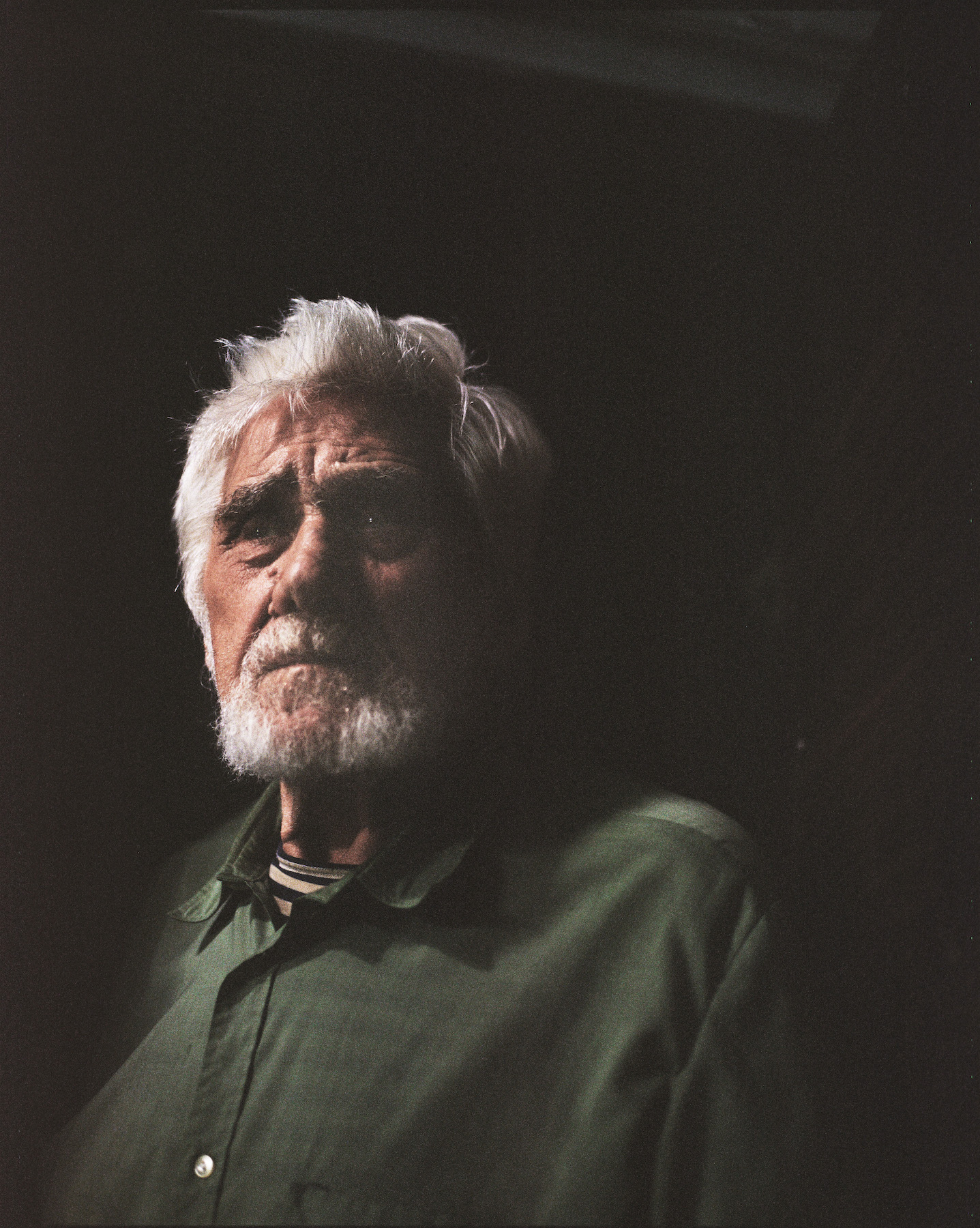 “I live alone with my son Vania. In 2014, my son was still small, he had just started to speak, he was just making his first sentences. War broke out. Pro-Russian groups took control of many places and infrastructure in our Oblast (Donetsk). The situation got out of hand: the bombing started, it was very stressful.

“Very quickly I saw that my son did not react like other children. He quickly stopped talking; he didn’t say a word. I took him to as many doctors as I could, and after a while, one of them diagnosed him with autistic disorder and explained to me that stressful situations could upset him much more than they would upset another child, and that this was why he had lost his speech.

“When Russia launched the attacks in February (2022), the situation gradually deteriorated. Our town, Bakhmut, in the middle of the Donbass, has been under constant shelling for several weeks now. I feel that my son is getting worse and worse and I don’t know what to do. I don’t know if I should leave to protect him and get him away from it all, and at the same time take him away from his home and everything he has ever known, or if I should stay and put him in such danger and stress from the constant bombing.

“I only wish for peace, to be able to have hope for a better future. But to be honest, I don’t know how we could find peace. I don’t want to be under Russia’s control but I don’t trust my government either. The Ukrainian government promises us safety and support, but in my son’s case they are not funding enough aid to be able to pay for the medicine and care he would need to be stabilised.” 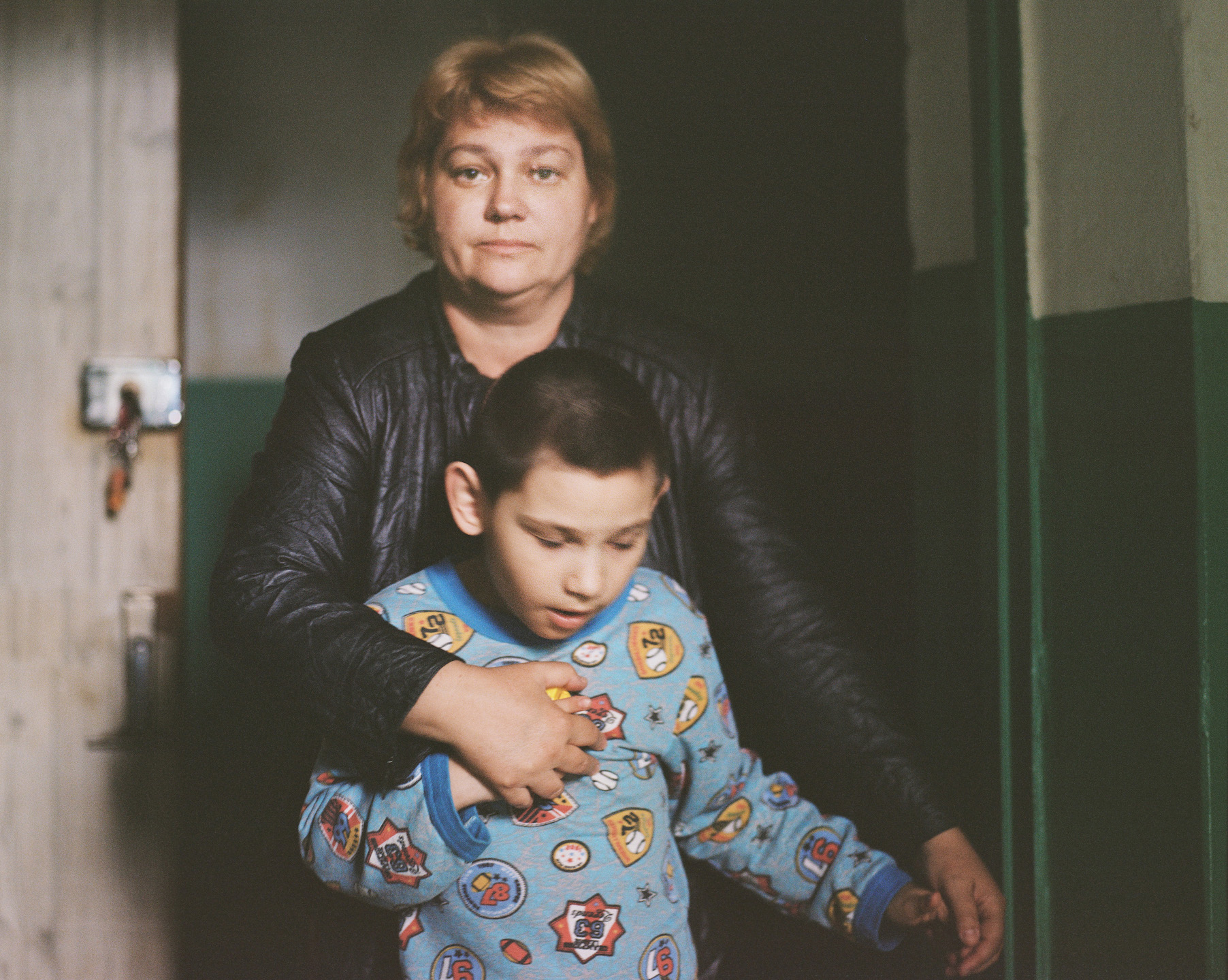 See more of Fiora Garenzi’s work on their official website.

Linkedin
RELATED ARTICLES
OTHER ARTICLES
With the virus now a global health emergency, we must take steps to fight misinformation and demand a swift UK-wide vaccine roll out, writes Phil Samba.
A sharp increase in officers armed with the electrical weapon is resulting in serious injuries and deaths.
To mark the premiere of his new documentary on surfing giant Gerry Lopez, the filmmaker and former pro skateboarder sits down to share his unique brand of wisdom.
A new series of photos by Johny Pitts shines a light on communities and subcultures that have all too often been overlooked.
Photographer Bud Glick recounts documenting everyday life in the area, and what it taught him about the Chinese immigrant experience.
After rewriting the indie rulebook with her devastating songs about romantic longing, the singer-songwriter is now imagining a future in which the artist is no longer a product.