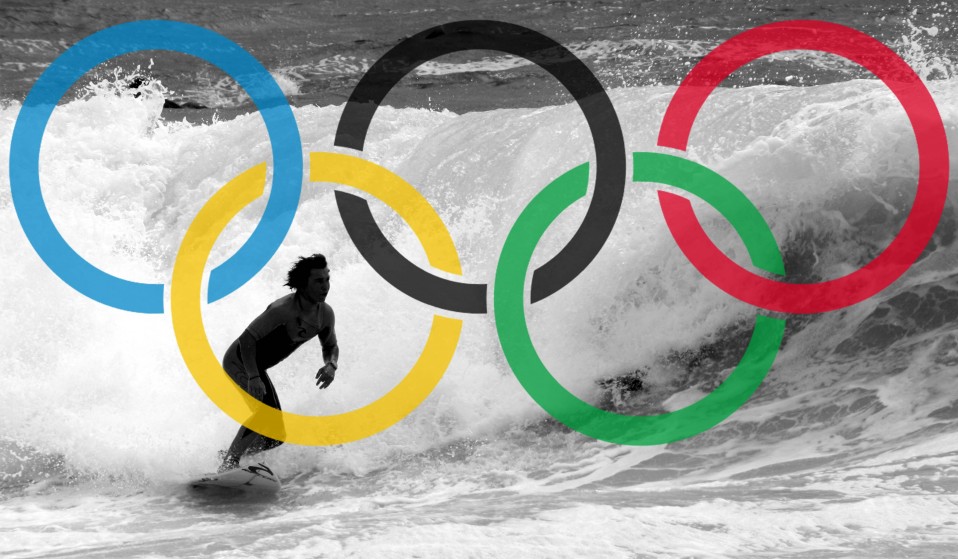 So, it's official. Surfing has been added to the list of sports competed in at the Olympic Games, starting in Tokyo 2020. Despite the PR puff presentation of this being great news for the surf community, for surfers the reality is there's nothing to celebrate.

So, it's official. Surfing has been added to the list of sports competed in at the Olympic Games, starting in Tokyo 2020. Despite the PR puff presentation of this being great news for the surf community, for surfers the reality is there's nothing to celebrate.

It’s happened: surfing has been added to the Olympics. It is part of a roster of new sports that the International Olympic Committee (IOC) hopes will attract a younger generation of sport enthusiasts and have them be homo oeconomicus, the economic man. But, homo oeconomicus is neoliberalism as the human condition where we are nothing but market actors and every activity is a market.

Fernando Aguerre who is president of the International Surfing Association (ISA), which lobbied long and hard for inclusion, gushed, “our Olympic dream has now become a reality and on behalf of the entire Surfing family I would like to express our sincere thanks to the IOC and Tokyo 2020.”

Upon hearing the announcement, the surfing community was both thrilled and dismayed. If surfing is a family it’s as dysfunctional as they come. Surfing has long had a ‘soul surfing’ versus competitive surfing debate. The former holds onto an ethos of informality, and even an anti-establishment ‘rebel’ identity even though surfing in the places it is most established is mainstream. The counterculture discourse was most powerful up until the 1970s, even taking on anti-capitalist outlooks. Some surfers believe that the ocean and its ecology forge a spiritual experience. Others refer to surfing as creative expression, an art. Others still just see it as something fun to do. The vast majority of surfers have no interest in surfing as sport.

Running parallel to this informality have been surfing competitions. Ancient Hawaiians held surfing competitions for honour, wealth, respect, romance, and to settle disputes. In the 1970s a professional surfing tour began, while an amateur World Surfing Games is run by the ISA. The latter has 100 member states, including many landlocked nations. In the contemporary era a professional tour, the World Surf League (WSL), is run by the private firm ZoSea, underwritten by American billionaire Dirk Ziff.

The WSL struggle to get corporate sponsorship. There is much less interest in professional surfing than they’ll let on, so the WSL go to great lengths to hide their methodology for deriving viewer figures. A 2014 analysis by the surf forecast website Swellnet found the WSL were being disingenuous as to viewer numbers, grossly overstating them. Given this, one wonders about the figures presented by the ISA to the International Olympic Committee.

Surfing has long fractured and split into multiple mutating forms, evidenced by the varying reactions to the Olympic announcement. Interests and experiences crossover. A surfing industrial complex comprised of both endemic and non-endemic companies profit from the dynamic enthusiasm, and does its best to keep stoking the fire. These days surfing is used to sell real estate and smartphones as much as fashion and wetsuits.

Rather than be up front about how inclusion benefits themselves, a gleeful PR discourse of benevolence about “sharing the stoke”, making kids happy, and inspiring them is disseminated. Their intentions appear admirable yet it’s a feel good approach to hide the main goal of providing a much larger consumer base to attract brands to their sporting organisations. In short, business partnerships. Some surf fans jumped on the bandwagon and expressed their joy online, acquiescing to homo oeconomicus.

So what will the billions of Olympics viewers get to see? A particular version of surfing that involves a few competitors bobbing up and down in the ocean for hours on end waiting to perform a few ‘tricks’ on waves that will almost certainly be low quality. Around the world, summer tends to be a poor time for wave quality. Autumn and winter are predominantly the surfer seasons.

The waves in Japan are predicted by surf meteorologists to be between thigh and head high at the time of year the Olympics will be held at the contest site of Chiba in 2020. It’s hardly a showcase to see the pinnacle of the sport.

Then there is the subjectivity of judging surfing competitions; there is no objective measure for mainstream viewers to follow and understand. The criteria is vague and relies on previous surfing knowledge. Even then, judging of surf contests is notoriously fickle and often nonsensical to the most ardent fans.

Yet surfing in the Olympics may have some constructive results. By virtue of its Olympic platform, more women and girls will see surfing than ever before. The Olympics’ Agenda 2020 recommends gender parity: there will be 20 women and 20 men allocated spots. The hope is that girls and women around the globe will be inspired to go surfing. That would be a good thing, women’s surfing has been marginalised for a long time.

And yet it’s all speculation. There are innumerable cultural and institutional barriers to girls and women surfing. Having women surfing in the Olympics is no panacea for these. Even if there is an initial spike in uptake, what support is there for them to continue?

Aguerre and other industry pundits refer to how young women are now surfing in Iran. There’s much irony in hearing Aguerre celebrating gains in women’s surfing considering he co-founded Reef, the surfwear company that reached new heights (depths?) in objectifying women. Reef ads were infamous for only showing female derrieres, the company ran ‘Reef Girl’ competitions (vote for the best looking backside), and each year produced the Reef calendar – 12 female buttocks, one for every month of the year.

The fact is, the young women in Iran surf because of the efforts of Irish surfer Easkey Britton, not the ISA, WSL, or the IOC. Perhaps people in Iran will see women surfing in the Olympics and participation will be more culturally acceptable. That is to suppose that people in Iran care what athletes from foreign lands in the Olympics do once every four years. I’d hazard a guess that it will be return trips by Easkey that opens doors.

There is the possibility that there will be more national government investment in young surfing athletes to try to get them to the Olympics. There is only so much money for youth sport. If this happens it is equally possible that matters become worse for young people rather than better. This is because it becomes more likely that funds go to a privileged few athletes rather than investing in development projects aimed at improving youth health care, education, housing, and wellbeing.

In reality there is no direct correlation between Olympic inclusion and increased funding or support for such social projects. It should not be that there has to be Olympic inclusion to validate investment in social programs. Evidence shows Olympic legacy can be lacking. After the London Olympics support for youth sport has declined. These projects need continuity to work effectively for the young people and not some reliance on sporadic injections of funds as part of an Olympic push which would leave the projects and youth caught up by competition and permanent precarity, two key traits of homo economicus.

There is no upside for the vast majority of surfers in the world for whom surfing is not a sport. Yes, they can still go surfing. But surfing is not skateboarding where one can cheaply build more skate parks or hit any street. Quality waves only ever occur in passing and are at particular locations, and as already mentioned, at particular times of the year. So there is also a concern about the further popularising of surfing and increased crowds at urban surfing locales, where local councils are already trying to deal with surf violence, tension, increased chances of injury through collision.

Hawaiian Olympic swimmer and surfer Duke Kahanamoku is a key person who introduced surfing around the world. Allegedly, in 1912 at the Stockholm Olympics he said that surfing should be in the Olympics. If he did say this, he was referring to a very different type of sporting spectacle.

Professor Jules Boykoff argues that the modern Olympics is ‘celebration capitalism’. That is, an affable presentation of a capitalist order that is is principally aimed to be entertainment for the world’s wealthy consumers, validates nationalism, causes ecological damage, marginalises the poor, diverts funds from necessary services, siphons off public monies to private interests, promotes unfettered commercialisation, gentrifies urban areas, and turns a blind eye to human rights abuses.

Why be so gung-ho about inclusion? And who really benefits by doing so?

It’s not simply a case of: is surfing a sport, art, or simply recreation? It is all of these modalities. What is at stake for surfers is much bigger. It is finding ourselves being complicit about letting the IOC have access to young surfers to allow corporations to exploit them even further for commercial gain, however shrouded in affable PR.

It can be argued that it is better to be part of the game and to reform from within. However, reform is a political strategy of the privileged to hold onto their privilege as they rearrange nothing more than their deck chairs for a better view of a new breed of homo oeconomicus.

As Rasta punk Don Letts told Huck, “The minute you want what the Man is offering, you’re fucked.”

Dr Clifton Evers is a lecturer in Media and Cultural Studies at Newcastle University.

Linkedin
RELATED ARTICLES
OTHER ARTICLES
Photographer Becky Tyrell went down to the fading banger and stock raceway to meet a community desperate to keep it alive.
AI companies that develop image-generators using copyrighted artwork from the internet are coming under fire from artists who say that it amounts to theft.
A new podcast is opening up the conversation between trans women and trans amorous men in the hope of building coalitions.
After blocking the Scottish government’s gender recognition reform bill, Westminster is now devising further changes to the law to make it harder for trans people to self-identify.
A recent High Court ruling against the right to wild camp in Dartmoor National Park sparked the largest land protest in history – and campaigners say their fight is not over yet.
At his West Bank restaurant, Fadi Kattan established himself as the voice of modern Palestinian cuisine. Now, he’s bringing his innovative, bold flavours to the UK’s capital.