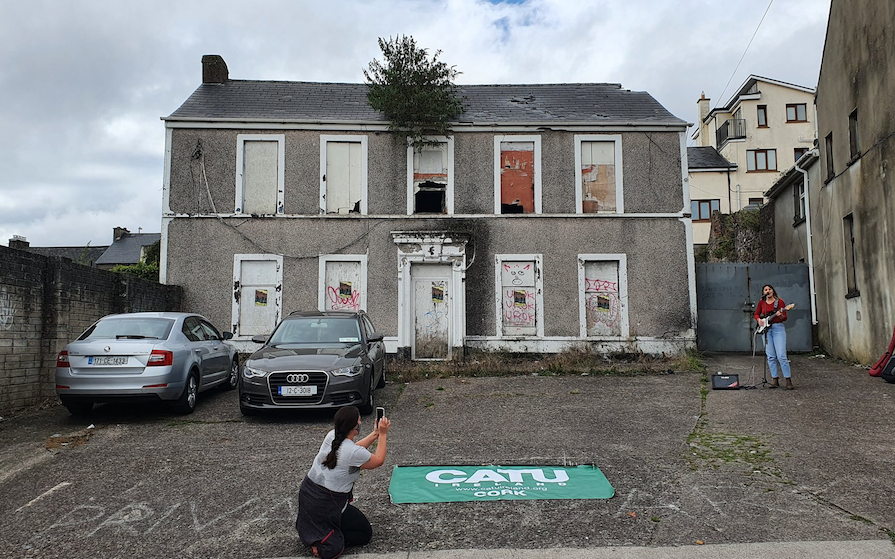 A grassroots organisation established amid Covid-19 are protecting and representing tenants across the country.

Ireland’s housing crisis is at boiling point with homelessness at record levels. But a grassroots organisation established amid Covid-19 are taking a stand by protecting and representing tenants across the country.

The housing crisis has become a ubiquitous part of Irish life. A long-lasting outcome of the 2007 recession, the dire situation has been impacting people of all ages and backgrounds for over a decade. Not a week goes by without a news headline about rising rents, unprecedented rates of homelessness or young people’s lack of ability to own their own home – and the government has done very little to counteract it.

It’s in this context that grassroots organisation Community Action Tenants Union (CATU) has emerged, with their tagline – “we only want the earth” – guiding their efforts to protect and represent tenants across the country. Founded in Dublin in 2020, CATU is the culmination of disparate housing activism efforts tackling years of tenant exploitation. “There were a lot of grassroots housing groups over the last six, seven years. [CATU] was a push towards organising more formally in communities and being able to do direct action” explains Jess, a member of CATU’s Phibsborough and Glasnevin branch.

Soon after the group’s establishment, Covid-19 hit. But despite the limitations of the pandemic, the union has amassed 1300 members in the 18 months since it was established.“It’s hard to know outside of the pandemic what that would have looked like, but the union is already huge,” says Seamus, another member of the Phibsborough and Glasnevin branch.

While the union began in Dublin, it has already expanded across the country, including Cork, Galway, Belfast and more. Steph, of the Cork branch, outlines the wide range of individuals helping to organise their branch’s activities. “We have a fair number of students, but we also have people in their 40s and their 30s. We have people in their late 20s, people with families, individuals from a range of backgrounds.” Members’ reasons for joining vary, but all of them are united by an urgent need for change. 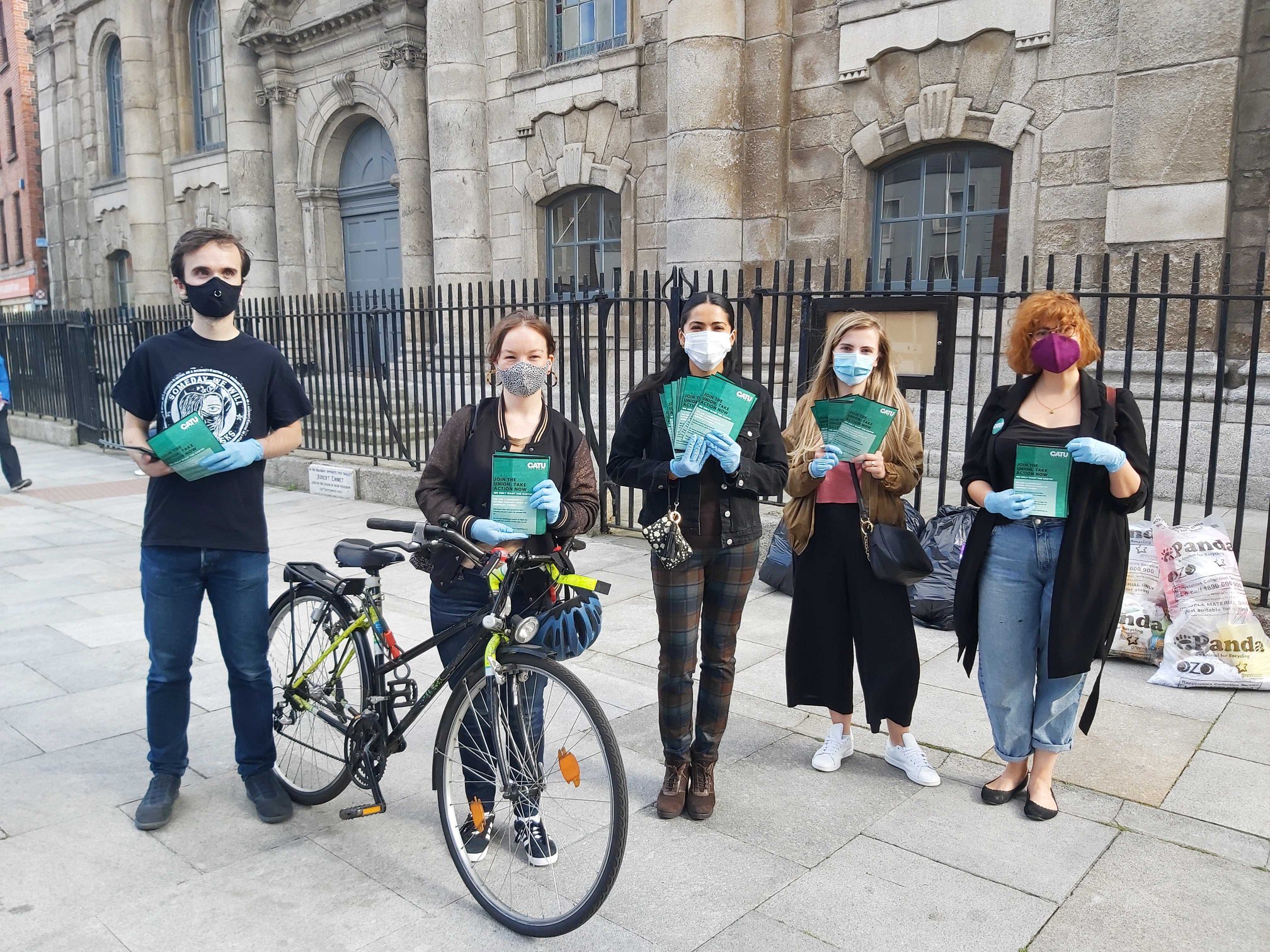 For Dublin tenants, evictions are an ever-present threat. The Phibsborough and Glasnevin branch carry out direct action to defend tenants from exploitative landlords and letting agencies. These direct actions are referred to as ‘Member Defence Cases’ and the branches regularly undergo training in how to handle turning up on the day to prevent evictions, negotiating with landlords and more.

“There was a landlady who was trying to raise the rent illegally and when her tenant said that the cost was way too high, she tried to evict him,” Jess explains of a recent case the branch has handled. “In response, we wrote her a letter explaining his legal rights and she backed down and signed a new tenancy agreement with him.”

For other cases, CATU have shown up during evictions to “negotiate with the landlord or scare off the heavies”. In one situation, a member of CATU’s Mountjoy and Dorset St. branch happened to witness five aforementioned heavies carrying out an illegal eviction and forcibly removing a tenant. CATU mobilised and, following an hours-long stand-off with An Garda Siochana (the Irish police force), the landlord and his gang agreed to back off. 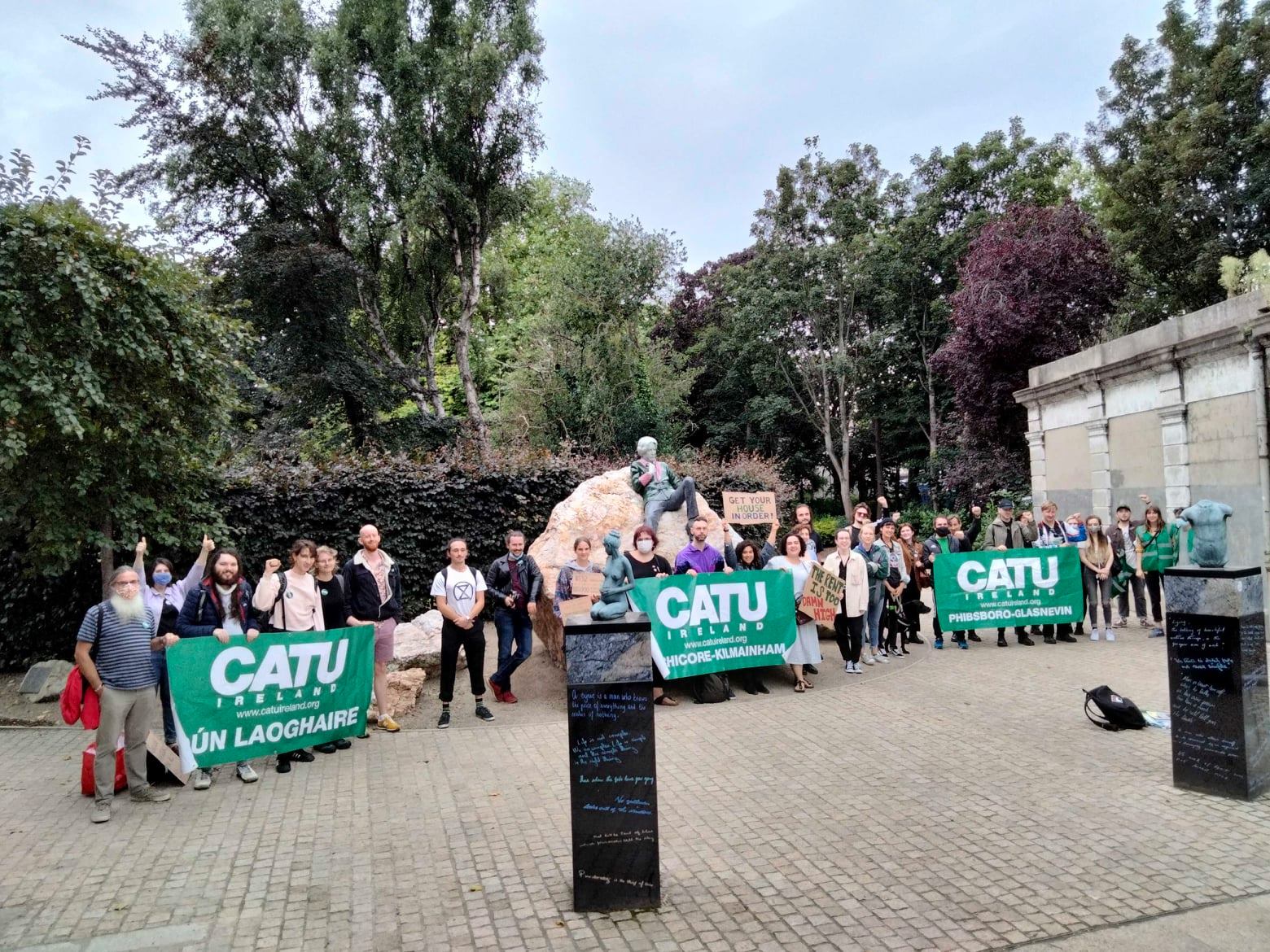 CATU is also fighting back against the landlords responsible for the over 1100 evictions that took place during Covid-19 restrictions, despite a government ban on people losing their homes. They’re about to launch a new campaign called ‘No Evictions’ to call to an end to evictions for people across Dublin 7 (an area North West of Dublin city centre), meeting exploitation with the defiant people power the organisation is built on.

Another battle that the Dublin branches and tenants are facing is the growing threat of co-living spaces, such as the one in development in the Phibsborough Shopping Centre on the northside of Dublin. “The shopping centre is being turned into a co-living space which is around €1000 per month per person for a small room with a shared common area,” Seamus explains. “It’s very expensive and will make the whole area more expensive. It’s another way of driving up the prices and costs of living.”

CATU ran a campaign on the issue and petitioned the area. Respondents said that they wanted public housing, affordable rent and community amenities provided instead of a co-living space that serves few of the community’s needs. For local people simply trying to keep a roof over their head, over-priced, undesired developments like this are a stark reminder of how housing is not built to support communities, but to drive-up profit margins.

The challenges facing Irish tenants vary from city to city, thereby impacting the focuses of the different branches. For Cork, growing dereliction is plaguing the community, despite an ongoing lack of accommodation and homes. Photos of the widespread building abandonment across the city are spreading across social media. They paint a stark picture of the homes and community spaces that could be filling the city but are left as eyesores.

“Cork City Council is using derelict properties and undeveloped land as collateral for private investment with no agreement on what the use will be for the land/buildings,” Conor, Steph’s Cork branch colleague, says. “We’re not going to get homes and community hubs when McDonald’s or Starbucks can pay twice the rent”.

Conor cites 2020’s demolishing of a landmark pub, The Sextant, as an example of this. The decision to demolish the pub was unpopular with the community, and the pub was set to be replaced by a 25-storey residential build to rent scheme. Earlier this year, however, it has been reported that the residential plans have been scrapped and the space will be used for an office block – a bitter blow to the locals who no longer have neither the space they loved nor the possibility of increased housing.

The Cork CATU branch is trying to tackle the issue through a new campaign. “We started postering every single derelict building in town as much as we possibly can,” Conor says. “Our posters have a QR code for an open letter to Cork City Council to sign with our demands to end dereliction”. Fighting major developers is no easy task, but CATU is more than willing to take on the challenge for the good of the community

The rising rents and accommodation shortages impact all age groups. When September rolls around, stories of exploitative living conditions and disproportionate rents are shared by student unions across Ireland. Cork CATU have witnessed the situation worsen this year. “We’re now seeing in Cork and cities like Limerick and Galway as well that students are literally living in hostels,” says Steph. “During the week, it came out that in one particular hostel in Cork City, there are students who have paid to stay there all the way to December.”

Steph and Conor believe students are targeted by landlords and letting agencies because they are young, easily exploitable people who need somewhere to stay and have no other options if they’re going to go to college. For the coming year, the branch will continue to challenge the situation by making sure students know their rights and by drawing public attention to the issue.

CATU is meeting the needs of tenants by responding to their daily hardships and pushing for the loftier goals of dismantling the entire housing structures hurting people across Ireland. “The government is a part of the problem because, like landlords and letting agents, they’re also trying to make as much money as they can from housing,” says Seamus. “This is in direct opposition to what we need as tenants and communities. The fight is at the highest levels. We want to break the power of those who are profiting so we can build communities that have resources and a decent life.”

Linkedin
RELATED ARTICLES
OTHER ARTICLES
Photographer Sean Maung reflects on documenting a small town in Pennsylvania afflicted by high levels of unemployment, poverty, violence, crime, and addiction.
A new law change is enabling Britain’s donor-conceived children to know the truth about their origins – but campaigners say the fertility industry must do more to protect people.
After fleeing the war in Ukraine, people are finding it impossible to secure affordable and decent housing in the UK.
Tristan O’Neill’s shots of dancers caught in moments of reverie at the height of rave’s golden age are a testament to the UK’s legendary club culture.
Since 2007, Gideon Mendel has made 20 trips to document floods in 13 countries. The result is an alarming record of what has already been lost to the climate emergency.
After building his reputation covering the US civil rights movement in the 1960s, the photographer went on to produce some of the most enduring images of the past century.