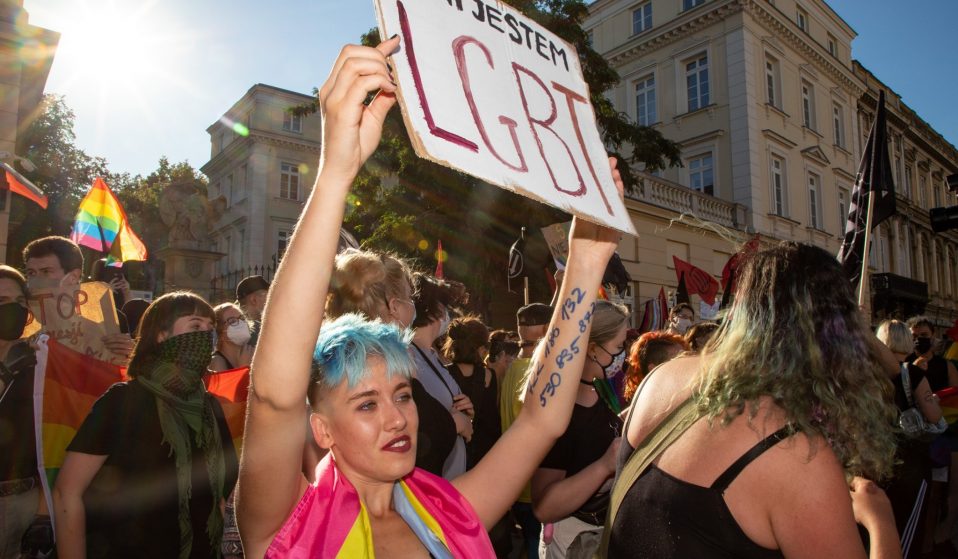 Local activists are fighting back as one-third of Poland declares itself an 'LGBT-free zone', and hatred towards queer people escalates under the ultra-conservative Law & Justice party.

One-third of Poland has declared itself free of "LGBT ideology", as state-sanctioned hatred towards queer people escalates under the ultra-conservative Law & Justice party. Writer Jake Hall speaks to the local activists fighting back.

Since November last year, Jakub Gawron has been working alongside fellow activists Paulina Pajak and Pawel Preneta to update an expansive, ever-changing ‘Atlas of Hate’, which maps out Poland’s so-called ‘LGBT-free zones’. At the time, there were approximately 90 zones. Now, there’s around 100.

Discussion or acknowledgement of queerness is banned in these areas, spurred on by a homophobic president who recently described LGBTQ+ people as “just an ideology”, and one “worse than communism.” This state-sanctioned hatred has been escalating since 2015, when the ultra-conservative Law & Justice party came into power. Their fundamentalist, pearl-clutching views have had a devastating impact on the lives of LGBTQ+ people across the country, but particularly in the notorious LGBT-free zones.

“Constant fear creeps into their lives,” says Gawron, whose inbox is often filled with these heartbreaking stories. “They weigh words more and more, they wonder if an item of clothing is too flashy, they choose their friend carefully and they consider emigration.” The mental impact of this endless self-surveillance is compounded by fear of being attacked or beaten in the streets, and Gawron claims this discrimination is seeping into schools, too. Citing an anonymous Facebook post, she describes one school which punishes students for wearing rainbow clothing.

Protesting discrimination can have brutal consequences. Last month, the arrest of activist Margot Szutowicz (Szutowicz is non-binary and uses she/her pronouns) sparked a weekend of demonstrations in Warsaw, referred to online as the ‘Polish Stonewall’, during which 48 protestors were violently detained by police and then denied basic human rights, like access to lawyers and vital medication. Szutowicz was eventually released from pre-trial detention on August 28th, but before that she went on hunger strike for two weeks. Her reasoning was simple: “Dying from hunger is not the worst option when people are threatening you to be beaten to death.”

Amongst the protestors were founding members of Oramics, an electronic music collective founded back in 2017 as a platform for women and non-binary queer people. “I was deeply amazed by the violence and brutality of Polish police forces,” says a member known only as ‘dogheadsurigeri’, who now studies in the Netherlands but travels back and forth to Poland, their home country. “The act of solidarity was beautiful and lots of people came to show support, but police used the argument of ‘illegal gatherings’ to randomly catch and arrest innocent people,” they say. “If you tried to talk to cops about their reasoning, they would reply that there’s no room for discussion – and that if you wanted, you could be arrested, too.”

Violence often erupts at these large-scale events, even when they’re designed to be celebratory. Last year, the first-ever equality march in Bialystok – a notoriously far-right county, also an LGBT-free zone – was met with violence by counter-protestors. This hasn’t deterred collectives like Kraków’s Queerowy Maj though, which began as an event organisation group in 2008 and cemented itself as an association in 2015. Organisers have launched a fundraiser to take this year’s event online, but board member Wit Kania explains that hypocrisy and bias usually plague marches. “Theoretically, the regulations on freedom of assembly in Poland put all organisers on equal footing,” they explain. “In practice, religious organisations and right-wing protestors have a lot of privilege in this matter – it’s usually us [LGBTQ+ protestors] who are asked to compromise and make concessions.”

Activists generally respond to this pushback from police and the state with resilience. Queerowy Maj has blossomed into an expansive collective which offers everything from psychological assistance (Kania says that loneliness amongst Polish LGBTQ+ people is common) to political consultancy, and Oramics last year pooled their talents for a compilation called Total Solidarity, whose proceeds will be donated to three NGOs (Campaign Against Homophobia, Fundusz dla Odmiany and Miłość Nie Wyklucza) and then redistributed to smaller cities, where daily life is comparatively more dangerous for LGBTQ+ people.

Local context is important, too. Oramics member Monster lives in Poznan, which they describe as a bustling, liberal city where the mayor is progressive and the gay clubs are the hottest in the city. “A lot of people don’t understand that about Poland,” they explain. “There is a huge divide between big cities, small towns and the countryside.” Fellow member Avtomat has been instrumental in building the country’s queer nightlife scene too, working with his second collective Ciężki Brokat to create unforgettable club nights featuring drag, burlesque and vogue performers, as well as STD and drug testing facilities. “I’m not saying they’re perfectly safe spaces because that would be impossible,” he says. “But both us and our party-goers do our best to keep them as loving as possible.”

Activism is already in clubs, on the streets and online, but Krzysztof Kliszczyński, who co-founded NGO Lambda Warsaw back in 1997, is bringing it to libraries, too. For years, he’s been archiving the work of historic LGBTQ+ trailblazers like Leszek Truchliński and Andrzej Selerowicz, whose 1980s Etap newsletter spawned an underground queer political collective in Wroclaw. “It’s not uncommon for young LGBTQ+ people to have no idea that there were others before them,” he explains, describing it as his mission to restore this memory through magazines like QueerStoria, first published this year.

Meanwhile, Bartosz Staszewski has been travelling the country for an archiving project of his own. Last year, he designed his own ‘LGBT-free zone’ signs and photographed them in the offending municipalities, but he soon decided the signs alone weren’t enough. “We need the human stories of the people living there,” he tells me of his decision to start photographing LGBTQ+ communities in the zones themselves. The result is a powerful photographic project filled with emotional stories of hardship, but it’s also become a political catalyst of sorts for the subjects. “They want to be change-makers,” he explains, describing a project called Rainbow Myth Busters, which sees LGBTQ+ people travel to the zones for frank, honest discussion with sceptical locals. 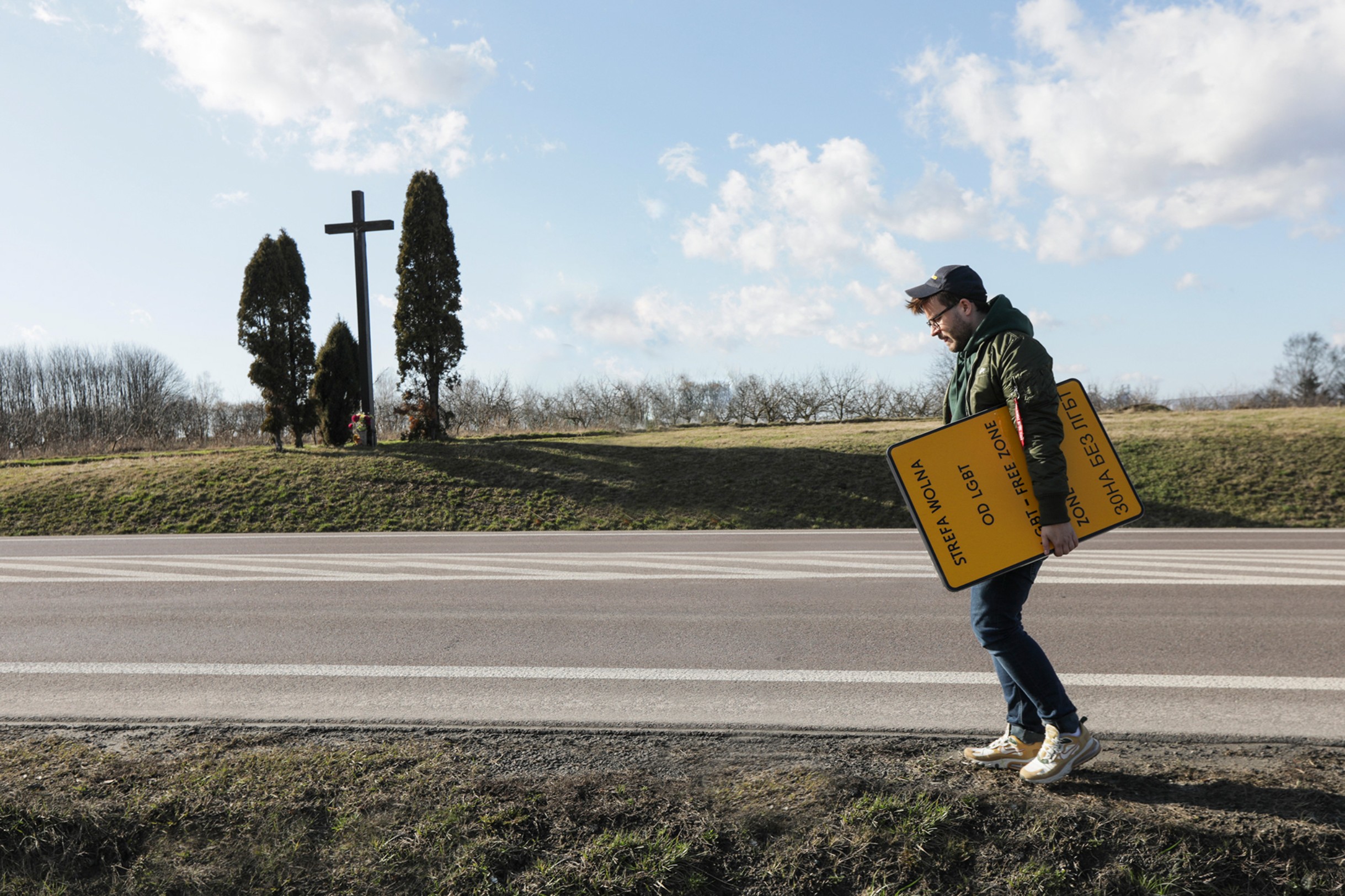 These combined efforts are gaining international traction – the European Union recently pulled funding from the LGBT-free zones, and solidarity protests worldwide have made global headlines. Staszewski has become the target of a televised hate campaign (“the more I’m visible, the more they hate me,” he tells me casually), but he’s also gained recognition for his work organising Pride parades across East Poland. In fact, he’s even been chosen for Obama’s leadership program, which funds and nurtures activists worldwide. “We will fight for our future,” he says firmly, citing the current wave of “rainbow solidarity” as proof.

It’s likely that violence against LGBTQ+ people will continue, but local activists need tangible support that extends beyond a social media share. “The government has cut all funding to NGOs supporting equality and is trying to police even their funding from abroad,” explains Avtomat. “We’re essentially left on our own when it comes to financing.” Now more than ever, this support is vital to ensure that queer people across the country can access the resources they need to survive living under a government that denies their existence.

“It still feels like not enough people are actually coming here to visit us and support us,” says Monster. “We see hundreds of activists from the scene coming to Unsound [musical festival], but when we’re asking for solidarity, we don’t see the same people reposting the news about what’s going on here, or when they do visit us, they feel like they can teach us all about activism.”

“Well, no. We need support, but on equal terms,” Monster continues. “There are plenty of people living here and putting in the difficult work every single day.”

Join the fight by signing up to All Out’s fundraising campaign.

Linkedin
RELATED ARTICLES
OTHER ARTICLES
After news broke last week around an expected reversal of the 1973 landmark law that made abortion legal in the US, protestors gathered in the UK in support of American women.
A group of Ukrainians living in Poland are helping Ukraine withstand Russia’s brutal invasion by buying supplies and shipping them directly to the war’s frontlines.
Satirical culture in the UK routinely protects the powerful and punches down. It’s time people stopped laughing along, writes Elia Cugini.
The government’s failure to take long Covid seriously has led to the formation of a group campaigning for the thousands of forgotten victims of the illness.
Shifting the focus from the cost of living crisis to tackling obesity while many starve or freeze is farcical and pointless, writes Fatzine founder Gina Tonic.
Following the success of her debut novel, the Tottenham native is restating her commitment to the place that made her.