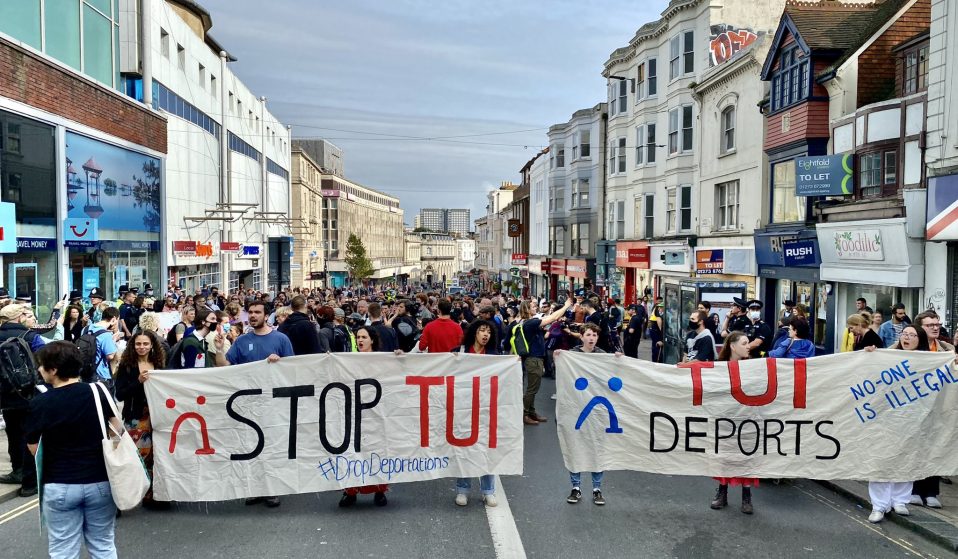 How did a grassroots campaign take on one of the world’s biggest holiday firms and win?

How did a grassroots campaign take on one of the world’s biggest holiday firms and win?

Last summer, alongside its more typical routes to Tenerife and Alicante, Tui UK was running weekly flights to destinations including Albania and Poland. Like many in the industry, the global holiday company had felt the pandemic’s pinch, laying off thousands of workers after restrictions put international travel on hold. But by the end of 2020, the company, which invites customers to “discover their smile”, had found a side gig, moonlighting as the UK’s main commercial operator of deportation charter flights.

According to Freedom of Information findings shared by research group Corporate Watch, Tui operated dozens of deportation flights carrying hundreds of people in late 2020 and 2021. But by last August, rumours began circulating that Tui was pulling out of its contract. The weekly flights had become fortnightly, before appearing to have petered out altogether. Although both Tui and the Home Office have both refused to comment on the commercial arrangement, six months have passed without a known deportation flight.

Amid this news, Stop Tui – a group of grassroots activists taking on one of the world’s biggest holiday firms – claimed a victory. The campaign came in the wake of Operation Esparto, an intensive Home Office drive to deport people who’d arrived in small boats to Europe, and grew out of efforts to stop the high-profile Jamaica 50 deportations in December 2020. The number of people removed on charter flights in 2020 was more than double the number removed the previous year, as the Home Office stepped up the deportation of people with criminal records as well as “third country” removals – mainly asylum seekers sent back to European countries they had passed through en route to the UK – before the end of the Brexit transition period.

The number increased further still in 2021, with at least 1,155 people deported by charter flight. This method is defended by the Home Office as a way of removing “foreign national criminals”, regardless of whether they have lived in the UK since childhood or if they have been rehabilitated. Campaigners also argue that deporting people who have already served their sentence amounts to a double punishment, while some deportation orders have been found to be in breach of the European Convention on Human Rights. Some of those threatened with removal had no criminal record.

Many of the campaign’s organisers have been opposing deportations for years. Zita Holbourne, the co-founder and national co-chair of trade union Black Activists Rising Against Cuts UK (BARAC UK), says: “We were warning in 2012, when the Immigration Act amendments were being debated, that the Windrush Scandal was going to happen – we just weren’t calling it that.”

Alongside Lesbians and Gays Support the Migrants (LGSM), BARAC UK had been calling for airlines like Virgin Airways and British Airways to stop facilitating deportations since before the story broke in 2018, while members of SOAS Detainee Support (SDS) had also been involved. As the groups had “crossover around those issues … it was kind of a natural thing to then target Tui” under one banner, Holborne says. And so, during the winter lockdown of 2021, the campaign to ‘Stop Tui’ was born.

Planning began in February, with a flurry of online meetings leading to a collective push against the company, including ‘twitterstorms’ – activists tweeting at the company in order to get hashtags like #StopTui and #tuidropdeportations trending – and phone blockades aimed at overwhelming Tui’s lines. But the UK was still in the grips of lockdown, which presented a challenge. Nik Hann, an organiser with key coordinating group SOAS Detainee Support (SDS), explains: “People had a lot of stuff on their minds. It [meant] trying to draw people’s attention to this.”

Hann says that a key element of messaging was to turn the company’s “family friendly” branding on itself by connecting it “to the fact that deportations ruin families”. A letter to a judge by a young boy whose father was deported by charter flight in December 2020 served as a moving reminder of this fact. Pleading for his father, a direct descendent of the Windrush generation, to be allowed to remain in the UK, he wrote: “If he gets sent to Jamaica I might not be able to see him again. If my dad could stay we could share my birthday and be together […] People are making decisions about my dad […] The decisions they make mean I won’t have a dad with me.”

Dan Brown, an organiser with Kurdish Solidarity Network, which helped steer the campaign alongside BARAC UK, SDS and LGSM, says having a clear demand – for Tui to drop deportations – was critical to its success. Activists also thought carefully about how to centre the campaign’s aim in a way that put the onus on top-level employees, rather than rank-and-file staff. They’d contemplated using the phrasing ‘boycott Tui’, but it was moved away from due to not wanting to antagonise the airline’s workers. “A lot of the discussion of the messaging was, how do we tread that fine line?,” Brown says.

Meanwhile, Steve Jackson, another organiser with SDS, says that while focusing on trade union engagement was considered, independent actions seemed better suited to their aims. He explains that it’s “really hard to get unions in airports and airlines” to take action. But that there’s “good reason” for this: “There’s lots of workers in precarious positions. Obviously, if there’s pressure from unions, the first thing that airlines are going to try and do [is] fuck over those workers.”

Although largely a grassroots campaign that developed local branches in cities including Liverpool and Manchester, backing from figures like MPs Nadia Whittome and Apsana Begum also helped it gain visibility.

We marched through Brighton to demand that @TUIUK stop running brutal deportation flights.

These flights tear families apart, send people to countries they have no memory of and put lives in danger.

The idea of “solidarity, not charity” was central to the campaign’s organising principles, Jackson explains, and tried to avoid “narrative traps” around “deserving and undeserving migrants”. “People aren’t inherently vulnerable,” he says. “It’s an incredibly powerful and oppressive state apparatus that is fucking people over and it can happen to anyone.”

According to Holbourne, the government has sought to redirect narratives around deportations to the Caribbean away from the Windrush scandal. In the years following the scandal, the focus has turned to people whose past criminal convictions triggered deportation orders, despite many living in the UK for decades and some having no criminal record. “The government started saying ‘this is not the Windrush generation, these are criminals’,” she says. “There were screaming headlines in mainstream news of the worst criminals, rapists, and murderers.”

“Maybe there’s one or two people that fall into that category on a flight… But the vast majority of people who have been booked onto the flight didn’t fall into that category,” says Holbourne. BARAC UK has worked hard to expose this. “We were able to demonstrate that these are people who came to the UK to join somebody, [often] of the Windrush generation – so the link is still the link of colonialism, and the Windrush link, which, the government of course didn’t want to acknowledge”.

She adds: “[Many] are people that have been in the UK since they were six-month-old babies or two-year-olds – they’re a symptom of British culture and society, not a country that they were born in.”

The campaign culminated in a national day of action in late August that saw local groups protesting outside ten Tui stores across the country. “We talked to a lot of people from different communities, Caribbean communities, west African, Kurdish and Turkish… communities with a lot of experience of the way that migration is criminalised,” says Brown. “People were quite shocked, saying they wouldn’t want to use Tui knowing that”. Shortly after the day of action, the group heard whispers to the effect that Tui were going to discontinue their contract.

A Home Office spokesperson said: “The public rightly expects us to remove those who have no right to be in the UK, including dangerous foreign criminals and we make no apology for our efforts to keep the public safe. The new plan for immigration will fix this broken immigration system and stop the abuse we are seeing by expediting the removal of those who have no right to be here.”

Despite the focus on “dangerous foreign criminals”, the government’s Nationality and Borders Bill also included sections which would allow ministers to strip people of their British citizenship without warning and criminalise refugees who reach the UK through an ‘irregular’ route. Both have been voted down by the House of Lords.

A Tui press officer said they were “unable to comment” on the issues raised in this article.

Linkedin
RELATED ARTICLES
OTHER ARTICLES
Sean Maung’s photos are a love letter to the Black and brown communities that make up New York.
Yesterday thousands gathered outside Buckingham Palace after news of the Queen’s death broke.
Birdy Chu reflects on documenting the historic moment in which the territory was formally passed back from the UK to China.
Thousands attended the annual event this year to wheelie through the city and call for ‘knives down, bikes up’.
In his 2008 series, the photographer pictured himself as Angela Davis, Martin Luther King Jr., Malcolm X, and other prominent figures.
Rhiannon Adam spent three months capturing an ageing society wracked by division, isolation, and the aftermath of scandal.