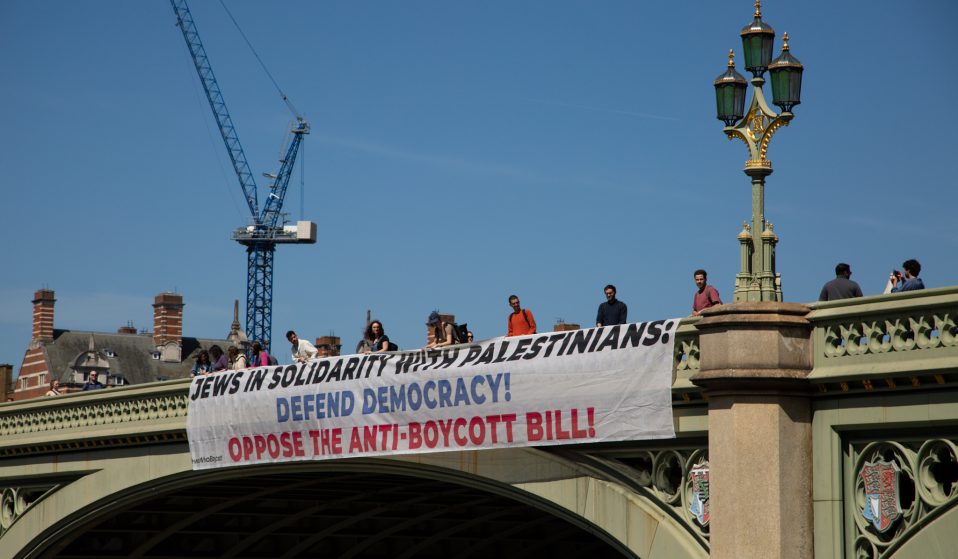 New legislation is set to make it more difficult to hold Israel accountable for its human rights abuses.

Legislation set to be announced in the Queen’s speech today will make it more difficult to hold Israel accountable for its human rights abuses.

On the eve of Israeli Independence Day celebrations, the Israeli Supreme Court approved the largest mass eviction of Palestinians from their land since 1967. After a decades-long trial, Masafer Yatta, a community in the West Bank comprising 12 villages, will be no more. With the stroke of a pen, the army finally has the green light to ethnically cleanse 2,400 people from their land. Forcible transfer is a well-trodden practice under Israeli Occupation and it constitutes an international war crime. One of the judges responsible for the ruling lives in the West Bank, in a settlement, which is also illegal under international law.

At the same time, here in the UK, the law is also being weaponised against Palestinians. Our government is enabling decisions such as the forced eviction of Masafer Yatta, and other ongoing human rights abuses under Israeli Occupation, to continue.

In the Queen’s Speech to be delivered today, the government is expected to outline its plans to introduce an ‘anti-boycott’ bill to stop public bodies from boycotting or divesting from foreign countries involved in human rights abuses or wanton environmental destruction. The bill will threaten many campaigns for social and climate justice, especially the Palestinian Boycott, Divest and Sanction (BDS) movement.

This bill will make criminals of those wanting to cut ties with regimes performing human rights abuses, while those same regimes use their own courts to carry out these acts legally, unfazed by international law. In effect, our government is making it illegal to hold oppressive regimes accountable.

Here, in Masafer Yatta, they evict us all through systematic demolitions. But a few days ago, the occupation court ruled the army can now carry out a mass eviction of our entire community, ethnicaly cleansing thousands at once. I fear the horrors that will come. #savemasaferyatta pic.twitter.com/FKQBikoSfO

The anti-boycott bill should be understood within the context of a spate of repressive and anti-democratic legislation, which includes the Police, Crime and Sentencing Bill and the Nationalities and Borders Bill. This latest law is another step in an ongoing project to shrink our voices and restrict democratic expression.

On Sunday (8 May), I was part of an action with a grassroots coalition of British Jews, mobilising under the name #JewsForDemocracy, to unfurl an 18-metre-long banner over Westminster Bridge that read: “JEWS IN SOLIDARITY WITH PALESTINIANS: DEFEND DEMOCRACY! OPPOSE THE ANTI-BOYCOTT BILL!”.

Jewish people historically have been both targets of, and participated in, boycotts and other forms of protest. Jews were active in the US Civil Rights Movements in the 1960s, and the Anti-Apartheid Movement in South Africa. In staging this intervention, we reject the government’s use of antisemitism as a justification for criminalising the right to boycott. Instead, we choose to join with other groups and communities to ensure that these tactics enhance, not limit, the freedoms and possibilities for justice for all people wherever they live and wherever they come from. 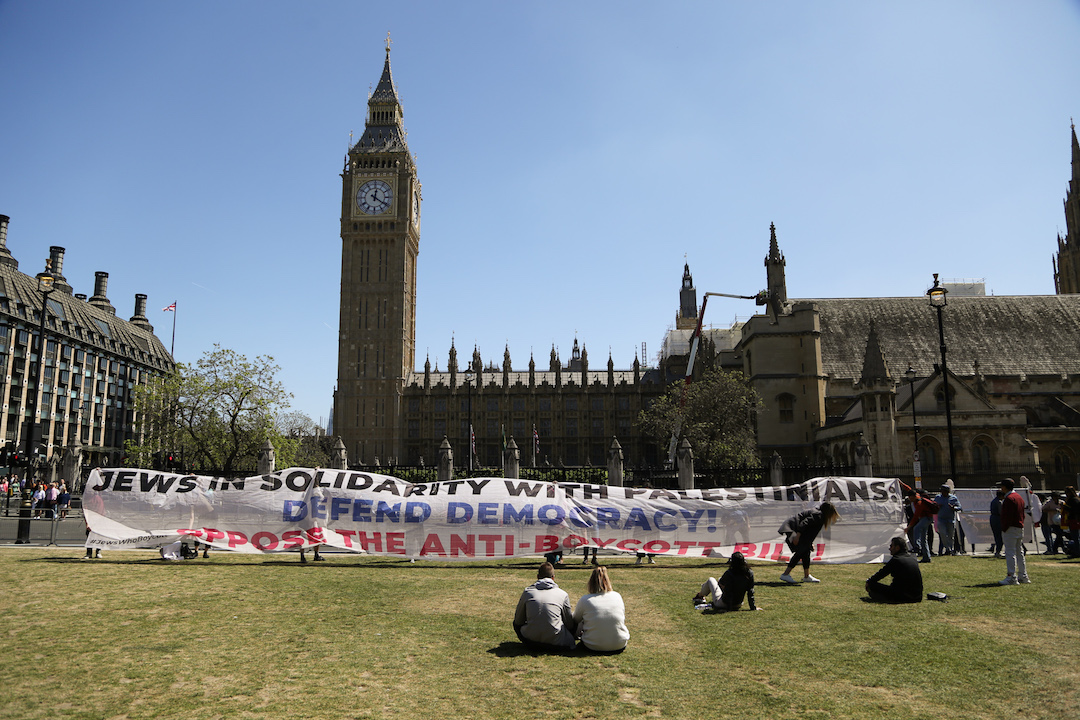 Boycotts are a threat to oppressive regimes because they are an effective, peaceful form of resistance. The mass boycott of South African products played a huge part in mobilising global support for the Anti-Apartheid Movement. The support from public institutions – from the National Union of Students, to universities, to local councils and news publications – were central to the success of the movement.

The threat BDS poses to Israel’s occupation can be measured by the fact that the Israeli government has formed an entire department tasked with limiting the influence of the movement around the world. The desperation of the Strategic Affairs Ministry has even led them to create a supposedly ‘grassroots’ anti-BDS app, nicknamed the ‘online troll army’, that intends to shut down criticism of Israel and to whitewash apartheid by giving five-star ratings to Israeli products in the diaspora. In the year that Amnesty International and Human Rights Watch release reports confirming that Israel practises apartheid, with major human rights organisations in Israel-Palestine reaching the same conclusion, the need for BDS is starker than ever.

Across the pond, new anti-BDS laws are being successfully challenged in courts throughout the United States. One reason for the success of these lawsuits is believed to be the US’s commitment to freedom of expression, as protected in the First Amendment.

The legal contradictions of the UK government’s proposed bill will mean that it will likely face at least some challenges in being passed. The bill goes against guidelines that public bodies follow that allow them to stop procuring from or investing in companies that have problematic “social and environmental factors”. Another contradiction is in the government note released in March this year encouraging public bodies to break contact with Russian businesses. When it suits their agenda, the UK government clearly takes no issue with boycotts as a tactic.

From the Bristol bus boycott to the anti-apartheid movt, boycotts are an important & legitimate form of protest. Yet, the govt is planning to ban public bodies from implementing boycotts if not in line w foreign policy.

Join on weds to discuss the bill & why we must resist it👇 https://t.co/qmNZtFi1CQ

As well as the clear targeted injustice directed at Palestinians, this proposed legislation will have far-reaching ramifications in terms of preventing a wide range of other campaigns, from those concerned with the arms trade to climate justice. It would likely mean that public institutions cannot protest against Saudi Arabia over the war in Yemen, because the UK is desperate to maintain its relationship with its biggest arms sale customer. It could also prevent the reining in of predatory behaviour by oil and other manufacturing corporations. Across the world, so many environmental achievements have been won through boycotts – or at least the threat of them.

As Palestinians continue to suffer from the ongoing Nakba, through military incursions; state-backed settler violence; mass evictions, home demolitions and land seizures; denial of medical permits; mass arrests, restrictions on movements; increased, intrusive surveillance and so much more, the UK government encourages the idea that these are somehow justified for my own community’s safety. The Tories are exploiting Jewish fear, and using us as scapegoats to undermine Palestinian solidarity, giving them a free pass to deal with a rights-abusing state, while building one themselves.

Our government and opposition will shamelessly defend the brazen ethnic cleansing of Masafer Yatta with their silence, doublespeak and even straight-out denial. As the situation in Palestine worsens day by day and the Israeli government’s Machiavellian ‘shrinking of the conflict’ doctrine, which seeks to normalise apartheid, gains momentum, the gagging of people trying to resist is chilling.

For the sake of democratic freedom, and for the future of climate and social justice movements – including the support of Palestinians’ entitlement to their human rights – we must oppose this draconian bill.

Linkedin
RELATED ARTICLES
OTHER ARTICLES
The idea that a younger generation is abandoning work has become a popular narrative online, but it doesn’t necessarily reflect reality.
A new project is documenting formerly incarcerated people as they transition back into civilian life.
A group of young Palestinians have found temporary freedom in the act of parkour, reimagining wreckage and ruins as a series of high-octane playgrounds.
For over a decade, gamblers have won big by employing people to place live bets from the court. But does this dubious method still work?
Sean Maung’s photos are a love letter to the Black and brown communities that make up New York.
Birdy Chu reflects on documenting the historic moment in which the territory was formally passed back from the UK to China.