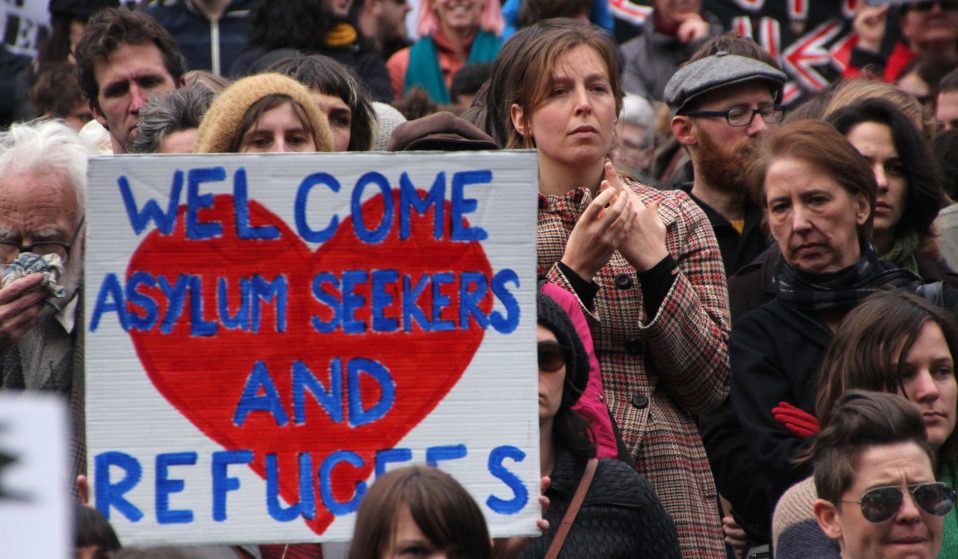 The Home Office’s use of hotels is having devastating consequences for families.

The Home Office’s use of hotels to accommodate asylum seekers is having devastating consequences for families, reports writer Robert Kazandjian.

At the start of the Coronavirus pandemic, the Home Office significantly increased its use of hotels as temporary accommodation for people seeking asylum in the UK. The government tasked private companies with creating a “safe environment” in these places for some of society’s most vulnerable people.

In March 2020, 1,200 people seeking asylum were accommodated in hotels. By October 2020, that number had jumped to 9,500. The increase was partly due to backlogs in processing asylum claims and as part of measures to reduce the spread of Covid.

What was framed as a short-term safety measure has mushroomed into a long-term crisis, with numerous reports of unacceptable living conditions akin to those found in detention centres and daily costs of £4.7 million. The failure of the government’s scheme to resettle Afghans who escaped the Taliban added 12,000 more people to the 25,000 currently languishing in hotels.

Around half of the so-called ‘contingency hotels’ are in London. In the North London borough of Barnet, approximately 800 people seeking asylum are accommodated across four hotels. Three of these are managed by Clearsprings Ready Homes, which also runs the controversial Napier Barracks along with numerous other facilities. In some cases, large families with young children have been living out of hotel rooms for longer than six months.

Amir*, age 18, and his mother, father and four younger siblings, arrived in the UK eight months ago, escaping political violence and persecution in Jordan. Amir tells Huck that the Home Office estimated they would spend ten days in a hotel before being allocated a home. They were moved to a hotel managed by Clearsprings in North London that sits on a busy dual carriageway.

“For the first four months we lived in two rooms. All seven of us. I was sleeping on a sofa… It gave me a big problem with my neck,” Amir says. “I was waking up feeling like an old man… My dad was waking up three or four times every night to check everyone was ok.”

Amir is studying in college and wants to go to university. Three of his younger siblings are attending schools in the borough. Being crowded into two small, poorly-lit rooms made it impossible for them to study. The family was eventually allocated a third room, which Amir shares with his younger brother. However, this has not alleviated the stress he feels about having strangers on the other side of a hollow wall. “If a husband and his wife are arguing, I hear them,” he says.

Amir was recently hospitalised after experiencing what he describes as something which felt like a heart attack. The burden of supporting his parents and his younger siblings as they all struggled to come to terms with the reality of seeking asylum became too much. “The doctor said that after everything that has happened to me, I have very bad stress. I have anxiety [and] need support with my mental health.”

Huck contacted Clearsprings Ready Homes about the allegations raised in this piece. They responded with the following: “Accommodated asylum seekers are able to raise any issues or concerns with staff directly or via the 24/7 Migrant Help hotline. We will then investigate the issue and resolve it in line with the requirements of the contract.

“Clearsprings Ready Homes works closely with its delivery partners to ensure that safe, habitable and correctly equipped accommodation is provided. Whenever issues are raised, or defects are identified Ready Homes will undertake a full investigation and ensure that those issues are addressed.”

In theory, contingency hotels provide temporary accommodation for people seeking asylum under Section 98 of the Asylum and Immigration Act. This gives people a room, food and toiletries while they wait for their application for Section 95 support to be processed. Pre-pandemic, a successful application for Section 95 support would trigger a move to long-term ‘dispersal’ accommodation within 35 days and some financial support. For people currently accommodated in a hotel, this means a weekly £8 allowance.

But the pandemic has brought the dispersal process to a near-standstill. Amir’s family have been receiving Section 95 support for seven of the eight months they’ve been in the UK, and should’ve been moved months ago.

These contingency hotels need to be viewed within the wider context of the Hostile Environment – a set of policies designed to make life difficult for migrants living in the UK. Just earlier this week (28 February), Priti Patel’s Nationality and Borders Bill, which seeks to criminalise people arriving in the UK without ‘permission’ (despite the fact that there is no illegal way to claim asylum) and would also allow ministers to strip people of their British citizenship without warning, was voted against in Westminster. While campaigners have celebrated this victory, the existence of contingency hotels speaks to the continued dehumanisation and trauma asylum seekers in this country endure under the Hostile Environment.

Farida Stanikzai is the operations manager of New Citizens Gateway (NCG), an independent Barnet-based charity which supports people seeking asylum. She explains that interminable waits for acceptable accommodation are part of the bureaucratic nightmare people seeking asylum have to contend with.

“We have people who have been [in a contingency hotel] for almost 12 months,” she tells Huck. “Most of our clients are still waiting for Section 95 support… What sometimes happens, after months and months of waiting, is that the letter granting that support is sent to a person’s previous accommodation.”

Roj*, age 35, and his son, who is in primary school, have been accommodated in a hotel in Barnet since June 2021. They arrived in the UK after a traumatic four year journey took them from Iraq and through much of mainland Europe. Roj tells Huck that one distressing issue they’ve faced since being placed in their hotel has been the quality of the food provided. Without the means, nor permission to prepare their own food in their room (things like toasters have been confiscated on the grounds of safety) and meagre financial support from the Home Office, families have no choice but to accept the three meals they are served at set times throughout the day.

“It’s always the same food,” Roj says. “The chicken smells bad and the fish smells bad. The rice is hard, like it’s not cooked.”

Roj says the quality of the food is just one of the many daily indignities he and his son face. “What we need is a home,” he says. “We have been in the hotel for more than six months now. This should not be legal.”

He tells Huck that the hotel’s management does not want children accommodated there to play together in the few communal spaces available to them – a dining hall and a disused car park at the rear of the building. “I tell them we are not in prison,” he says. “You cannot ask [children] to stay in a three-metre-by-four-metre room… They become loud and start to shout at their parents because they are frustrated.”

Farida says that with tourism being non-existent at the height of the pandemic, Home Office contracts offered a lucrative alternative to struggling businesses. But with tourism season now approaching, thousands of asylum seekers fear they will be kicked out of these hotels and made homeless.

As Farida points out, untrained hotel staff were never going to be able to meet the complex needs of people seeking asylum. “You need people who understand different cultures, how to deal with sensitive cases, and how to support people who have experienced trauma,” she says.

Roj’s son was struggling to cope emotionally. He was referred to the borough’s clinical services by his school. An initial assessment by a psychotherapist concluded that while he’d clearly benefit from ongoing therapeutic support, long-term therapy would not be an option until his basic needs – specifically his living situation – are met. The rationale is that it could be harmful for a child if they were suddenly moved to another borough in London or part of the country after beginning important work with a therapist. This leaves children like Roj’s son in an incredibly vulnerable position.

Farida explains that huge waiting lists are the main impediment to children like Roj’s son accessing support for their mental health. The pandemic saw referrals for child and adolescent mental health services soar. In March 2021 there were 65,533 referrals – double the amount of March 2020.

“The wait can be months,” says Farida. “For people living in a hotel with no access to cash, a lack of support [and] barriers to language, these things pile up and then they end up with a mental health crisis.”

These mounting pressures can have fatal consequences for people seeking asylum. In June 2020, Badreddin Abadlla Adam was shot dead by armed police after stabbing and injuring six people at the Park Inn Hotel in Glasgow. His mental health deteriorated after he was moved from shared accommodation to the hotel at the start of the pandemic.

Hasifa* and her two young children are currently living in their fourth contingency hotel after arriving in the UK from Sudan in August 2021. After being held at the airport for nearly ten hours, they were placed at a hotel in West London. Two months on, while infected with Covid-19, the family were moved to another hotel near Heathrow. Twelve days later, they were moved again to a hotel in central London. Hasifa says the room they were allocated was unliveable.

“There were two small beds for the three of us,” she tells Huck. “The room was cold. We were still recovering from Covid; I still had a fever and a very bad cough.”

Hasifa says that the lack of freedom is draining. “I told them I wanted to take my children to South London to see my friend, and stay overnight. They said this is not allowed… We feel like we have to be observed and controlled everywhere.”

Amir says his younger siblings are struggling with this, too. His brother, who is in primary school, has become aggressive towards his parents and is refusing to eat. “He just wants to do small simple things, to go outside and play, or to watch a movie with his family. We cannot do it,” he explains.

Instead of being met with safety, this is the devastating reality for people seeking asylum in the UK. As Amir puts it: “We don’t have choices. It is like we are imprisoned.”

Linkedin
RELATED ARTICLES
OTHER ARTICLES
The singer-songwriter discusses her intimate new project – and the advice she’s picked up across a career as one of rock’s leading voices.
Writers Gracie Mae Bradley and Luke de Noronha take on the callousness of borders, arguing for a world beyond them.
50 years since its inception, and the campaign calling for recognition that capitalism depends on domestic labour is as pertinent as ever.
Proposals to introduce a minimum GCSE threshold for student loans will disproportionately affect those from marginalised backgrounds.
Over the years, a swimming hole in a city park has evolved into a magnetic meeting place for Philadelphians – a hideaway where people can connect with the natural landscape, and each other.
Over a dozen Stop Deportation activists locked themselves to each other outside a detention centre to prevent coaches taking those due to be on the Rwanda deportation flight from leaving.