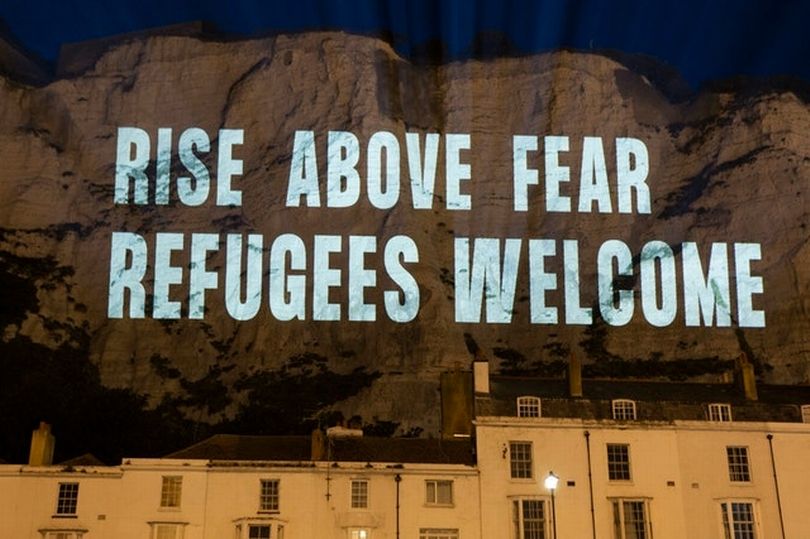 Despite politicians whipping up resentment and fear, locals in coastal towns are resisting the narrative of hostility by showing solidarity and support towards refugees appearing on UK shores.

Despite politicians whipping up resentment and fear, locals in coastal towns are resisting the narrative of hostility by showing solidarity and support towards refugees appearing on UK shores.

At the end of July, just before the House of Commons rose for the summer holidays, the controversial Nationality and Borders Bill passed its second reading. It forms part of the government’s wide-reaching immigration reforms, making changes to the UK’s asylum system, including criminalising those who enter the UK ‘irregularly’. Despite this violating Article 31 of the UN Refugee Convention – refugees should not be penalised for entering a country without permission to claim asylum – the government is pressing ahead with the legislation at full speed. According to parliamentary briefings, Channel crossings are one of the reasons for their urgency.

During the debate a number of MPs representing coastal towns gave statements welcoming the proposals due to the impact Channel crossings have locally. This included Folkestone and Hythe MP Damian Collins, who criticised Channel crossings becoming a “fact of life” for his constituents, and Dover MP Natalie Elphicke who presented refugees arriving by boat as a threat to national security and demanded the government “put a stop to it”. Support for the legislation was also forthcoming from Sir Robert Syms, the MP for Poole, who said that his constituents “want to see an end to rubber boats turning up in Sussex and Kent”.

However, despite politicians and media whipping up resentment and fear, locals in coastal towns are fighting back against this narrative of hostility by showing solidarity and care for the new arrivals. Organisations such as Kent Refugee Action Network (KRAN) are offering support to help young refugees within the community.

“Of course, local people are worried about the risk to life that comes with crossing the Channel and people are worried that they do not know what to do should they come across a boat in distress,” says Bridget Chapman, who is based in Folkestone and works with KRAN.

Folkestone, like neighbouring Dover, has been in the spotlight as a landing place for boats this summer given the short distance to Calais, where some of the Channel crossings start. Despite the government instrumentalising the situation to mobilise support for its bill, Chapman does not believe that their rhetoric accurately represents the spirit of solidarity in the town.

Historically, the area has been shaped by its location. Visitors to Folkestone will notice an old defensive fort towering over the harbour. It is one of Britain’s Martello Towers, built across the British Empire in the 19th century to defend against foreign armies. The town is also home to the Napier Barracks, a former military training camp and station for troops in the First World War. Since September 2020, the Napier Barracks have been used by the Home Office to house asylum seekers.

“[There’s] all this rhetoric about ‘first line of defence against the invader’, but we have welcomed people here, too,” Chapman observes. She points interested visitors in the direction of the town museum where a painting hangs that was gifted to Folkestone by Fredo Franzoni, a Belgian artist who arrived as a refugee via boat during the First World War. When Germany invaded Belgium, 16,000 refugees arrived in one day on the local beach from France on small boats. The painting shows how the town turned out to welcome them into the community with the mayor and nurses present. Organisations like KRAN want to replicate this spirit of solidarity: if the town was able to offer shelter to those fleeing catastrophe in the past, why can it not be done again today?

“There might be a vocal minority that is opposed to immigration but in reality, people are more nuanced,” Chapman says. “The majority is fine with it, or at least believe that people should have a fair chance.” She takes issue with the media reporting that arrivals makeup “record numbers” when, looking back to the Belgian refugee situation, this is simply not true. Chapman often tries to make this point when speaking to the media, who she believes are guilty of deploying scare-mongering tactics.

Since the Napier Barracks opened as an accommodation for people seeking asylum, KRAN has been so overwhelmed with local offers of support that they were unable to find an appropriate role for all volunteers who wanted to chip in. At an event to welcome the new Napier residents, at least 400 people showed up – a stark contrast to the 27 people that a far-right counter-demo was able to mobilise. And not for the lack of trying: “They made YouTube videos calling for “all patriots” to come down and were leafleting houses close to the Barracks. They are organised far-right activists, not locals,” Chapman says.

Aside from supporting Napier residents, KRAN currently has 40 regular volunteers who mentor newly arrived unaccompanied refugee children and another 40 in other roles related to the running of the organisation.  Mentors undergo a process of training to support their mentees with any questions they might have around life in the UK and to signpost them to other organisations that can assist them. But they also provide friendship to people who would otherwise suffer from social isolation – even something as simple as going for coffee together in town.

KRAN is not the only organisation mobilising coastal communities in this way. Refugee Buddy Project are matching local volunteers with newly arriving refugees in Hastings, Bexhill and Wealden. Adrienne began volunteering with Refugee Buddy Project 2019 in Hasting – where she’s lived for 28 years – because she wanted to understand more about the situation refugees face, rather than just hearing about it in the news. She was also determined to reclaim a narrative about her town: “I wanted to show that it is okay for us to be together, to get to know people on a personal, social level,” she says.

This attitude is clearly at odds with the suggestion made by Sally-Ann Hart, the local MP, who claimed in a letter to Priti Patel that locals wanted to see an end to Channel crossings because the area becoming a “chosen destination” for refugees would “cause deep unease and concern”(the area was being overwhelmed.) The Refugee Buddy Project and others responded to Hart’s claims, expressing their concern over her not accurately reflecting the situation or the feelings of her constituents.

For Rossana Leal, who founded Hastings Refugee Buddy, the intention was to extend the same kindness she had once received as a refugee. Rosanna arrived in Britain after her family fled the Pinochet regime in Chile in the 1970s. The warm welcome she received from the community in Scotland, where she first lived, was something she has never forgotten.

Volunteers with the Refugee Buddy Project come from all walks of life, but what they all need to be approved as ‘buddies’ is to believe that no human is illegal. Sadly, with the backdrop of toxic media discourse on ‘bogus’ asylum seekers, undeserving ‘economic migrants’ and ‘illegals’, this is not an attitude that can be taken for granted.

After completing their training, volunteers usually get assigned a family that they buddy up with and mentor. The organisation also ran a community café before the pandemic which served as a much-needed meeting space for locals.

But Rossana and her team quickly realised that solidarity and friendship was not always enough amid a system that was failing the people they worked with. So, volunteers began to campaign to bring down barriers to access healthcare and around the inequalities faced by refugee children in education. Project staff and volunteers collected the experiences of refugees who struggled to access healthcare locally because of language barriers and presented their findings and recommendations to local decision-makers. Now local hospitals have made available iPads that aid with translations so that patients can understand their treatments and give proper consent.

Activism that fills the gaps left by the hostile environment and austerity quickly becomes intersectional as politicians dehumanise the most vulnerable in society. Adrienne believes that Hastings is a compassionate and understanding community precisely because it knows deprivation. Local people understand what it means to pull together.

The Refugee Buddy Project volunteers believe they can create a different narrative about Hastings. And by functioning as a network, they hope that more and more people will become involved. They plan to acquire funding for a proper community organiser soon to keep building and deepening these connections.

As the Nationality and Borders Bill is set to return in September, those on the frontlines will continue to fight for the rights of refugees. They hope that their actions present a different view of Channel towns to that propagated by MPs and journalists – a view of coastal communities not as border fortresses, but as safe harbours for refugees.

Linkedin
RELATED ARTICLES
OTHER ARTICLES
To mark the anniversary of the mass trespass of Kinder Scout, a group of hikers came together with the intent of creating a new, fully inclusive culture for rural spaces.
With their latest capsule collection, SCRT have constructed their own mythology, based on the story of a fictional meteor shower that hit a small Scottish town.
Following the release of his newly republished 1991 book, Redheads, the American photographer reflects on his celebration of ginger people and their magnetic power.
The answer to improving the well-being of Palestinians rests not with individualised solutions from the Global North, but with ending settler colonialism.
Members of the collective share some of their reasons to run as part of #UnitedBySummits, a campaign that looks to uncover transformative power of the outdoors.
In the last of our dispatches from OFFF Barcelona, Rufus Deuchler and Vincent Gault discuss the future of creative process.