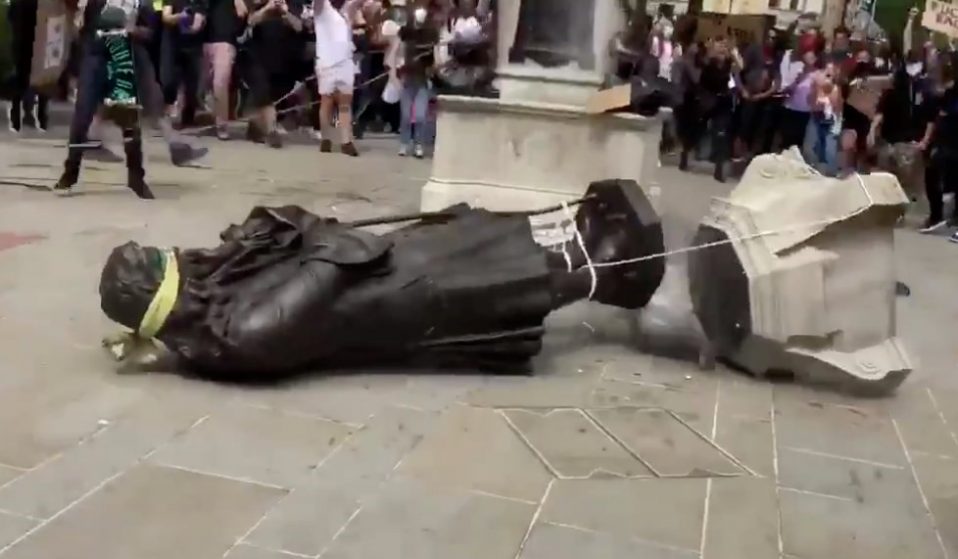 A move to refer the Colston Four’s acquittal to the Court of Appeal is nothing but an attempt to undermine our right to protest, writes Ben Smoke.

A move to refer the Colston Four’s acquittal to the Court of Appeal is nothing but an attempt to undermine our right to protest, writes Ben Smoke.

On 6 January 2022, in the packed public gallery of Bristol Crown Court, there was a heavy silence. Around me, supporters of the Colston Four sat with bated breath as they awaited a verdict. In that split second between the clerk asking the foreman of the jury whether they found the first defendant on the docket guilty or not guilty the air was still and thick. It hung there, as hearts in the room raced.

As the foreman announced ‘not guilty’ verdicts for the Four – who were on trial for criminal damage following the toppling of the statue of slaver Edward Colston at the previous summer’s Black Lives Matter demonstration in Bristol – the room erupted. The roars of joy and relief filled the small space as the Four walked free from the courtroom. The celebrations would spill out onto the streets outside, before decanting to a pub and going on long into the night.

The verdicts represented a huge victory not just for the Four, but for the city of Bristol, who, polls showed, were overwhelmingly in favour of the protestors’ actions. It was, like many before it, the verdict that launched a thousand columns. It reignited culture war arguments about our history, brought about fraught, generally ill-informed takes on our criminal justice system and saw a raft of interventions and condemnations from politicians. What went mostly unnoticed, however, is that the Colston Four verdict is just the latest in a quiet revolution that has been rippling through the country over the last year.

Isn't it interesting reading the tweets from people who are vex the Colston Four were acquitted.
Funny how that angry energy has never been directed towards Edward Colston, the other evil slave traders, the transatlantic slave trade itself and racism in general.
Funny that 🤔 pic.twitter.com/UY2dzjeJKd

The genesis of this revolution starts not in Bristol, but 130 miles or so east, outside the ExCel convention centre in east London’s Docklands back in 2017. Every two years, the centre is home to the Defence and Security International (DSeI) fair in which weapons manufacturers exhibit and sell weapons to countries across the world. Each iteration is met with fierce resistance by protestors who traditionally attempt to block entrances into the centre in the weeks leading up to the fair as exhibits, such as tanks and helicopters, are driven in. 2017 was no different, and so four protestors attached themselves to one another with lockboxes on a road leading to the centre.

They were eventually cut out, charged and prosecuted for wilful obstruction of the highway. The four were acquitted at trial as the district judge decided the police had failed to take into account their article 10 and 11 (freedom of expression and freedom of assembly respectively) rights when arresting them. The judge stated that the rights, enshrined in the Human Rights Act, offered a lawful excuse to protestors’ blockade of the road.

The prosecution duly appealed and was successful in the High Court, which ordered convictions be entered onto the record for each of the defendants. The defendants then appealed up to the Supreme Court, who handed down a judgment last summer. They sided with the original judge, acquitting the defendants once more and creating what has come to be known as the ‘Ziegler test’, named after the lead defendant in the case, Nora Ziegler.

The Ziegler test allows defendants to argue that they had a reasonable or lawful excuse as a conviction would be a disproportionate interference with their conventional rights. That is a decision that is left for the jury.

In the aftermath of the Ziegler judgment, a number of cases against protestors were immediately dropped. Throughout the nine months since it became law, protestors in a multitude of cases, including a raft of Extinction Rebellion cases, have used the test to demonstrate that conviction would impinge on their hard-won right to protest. It is this same test that helped see the Colston Four walk out of court back in January.

But today, this test is under attack. Yesterday (12 April), as news that the Prime Minister, his wife and the Chancellor were all subject to Fixed Penalty Notices for breaches of Covid regulations, the Attorney General, Suella Braverman QC MP, announced her intention to appeal one of the Colston Four acquittals.

In an embargoed press release, the Attorney General’s office announced that Braverman is seeking clarification of the law around what can be used as a defence to criminal charges arising from protests. While it is important to note that this appeal cannot overturn the not guilty verdicts, this action represents nothing short of an all-out assault on the right to protest.

For many in government, it is an inconvenient truth that human rights are universal. The government, by way of this appeal, is seeking to limit the use of the Ziegler test to instances of obstruction of the highway. In doing so, they are directly attacking the universality of our rights, and as such, the rights themselves. Arguing that those who commit certain ‘crimes’ have more rights than others is nothing short of an abomination.

Our #HumanRightsAct protects the right to protest and places an obligation on public authorities to respect people's rights.

The Government wants to rip it up.

This latest attack, however, is not unexpected. Protest lawyers I’ve spoken to over the last nine months have all said, ‘not if, but when?’. This appeal comes as the Police, Crime, Sentencing and Courts Bill – itself an attempt to legislate meaningful and impactful protest out of existence – continues in its final passage through Parliament. It also comes in the context of the government launching a consultation on the Human Rights act, setting its sights on abolishing it in favour of a watered-down, milquetoast ‘British bill of rights’.

The courts are an imperfect apparatus for enacting change. They are an institution that upholds a bourgeois system of law, developed over centuries to entrench the power and resources of the elite. At best, they mirror the structures of oppression that wreak havoc on society, at worst they actively build them. That said, they have, over the years, provided an invaluable stopgap to the worst excesses of the governments of the day. In more recent times, they have been the last bastion of defence for many seeking to halt the insidious Hostile Environment or the slow creep of authoritarianism.

There exists a coterie of protest lawyers who have dedicated their lives and careers to using this imperfect weapon to hold the government to account and to uphold the most basic of our lives. Several of them were instructed in the Colston Four case, including barristers Blinne Ní Ghrálaigh who masterminded the Ziegler case and Tom Wainwright who – literally – wrote the book on protest law.

As this government’s attack on protest continues, we must heed Wainwright’s words and warning. This fight is too important for us to lose. We must resist, with everything we have.

Linkedin
RELATED ARTICLES
OTHER ARTICLES
Photographer Jeffrey Silverthorne always treated his subjects – often those living on the margins of society – with empathy and respect.
Hackney Bumps is a DIY sanctuary in the heart of East London, home to a thriving diverse community of skateboarders – and beyond.
A new documentary tells the story of an unassuming cul-de-sac of 13 timber framed houses built by Fusions Jameen – London's first Black housing co-op.
In North Carolina, people are living near to Duke Energy’s Belews Creek Steam Station, where toxins are pumped into the air, water, and soil.
Ireland’s national sports are modernising. At the forefront of this movement is Na Gaeil Aeracha, the country’s first ever queer GAA club.
A campaign seeking to prevent future injustices where there is state involvement is gaining momentum, with Labour recently pledging its support.