News & Politics / The cost of living crisis is not a game 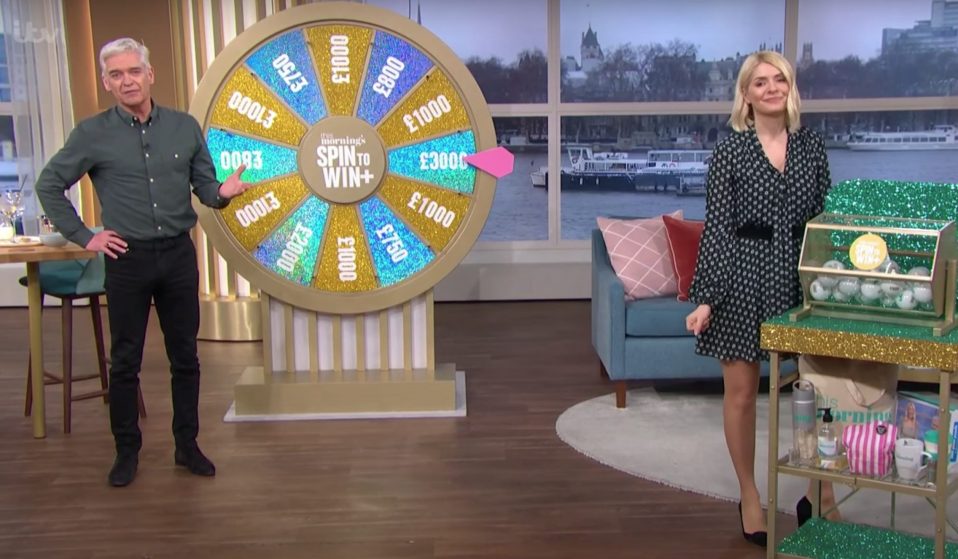 By turning a real-life crisis into daytime television fodder, TV bosses have once again shown themselves to be completely out of touch with audiences.

By turning a real-life crisis into daytime television fodder, TV bosses have once again shown themselves to be completely out of touch with audiences, writes Sarah Woolley.

Earlier this week (5 September), Philip Schofield and Holly Willoughby outraged This Morning viewers when they announced a new prize in their ‘Spin to Win’ competition: four months worth of payment toward energy bills. The first contestant up was Alex from Enfield, who, when asked by multi-millionaire Schofield if he was “a bit worried” about his bills, replied: “I’ve got one of those prepayment meters and it’s absolutely murder”. After a tense spin of the wheel, the dial landed on ‘energy bills’, to which Alex responded: “Oh my God! Thank you! Fantastic, what a relief, thank you very much!”

The immense financial strain people across the country are under has, undoubtedly, made Spin to Win an even higher-stakes game. But the cost of living crisis isn’t daytime television fodder: it’s life or death. Energy bills for a typical UK household are set to rise by 80 per cent, with experts warning that lives will be lost. An especially cruel “winter of disconnect” is predicted, as millions of people will be forced to live without heat, light and power in their homes as their annual energy bills soar to £3,608.

“Complain about online” with a shrug. Oh grow up. We’re a nation angry, fed up and exhausted by our government, and sick of the nonsense we see day to day of people trying to turn our real life crisis into a quirk or a “bit” for some TV game show “fun”. pic.twitter.com/f8nQZkqbLh

The backlash to the segment was intense and immediate. Viewers compared This Morning’s “vile” and “dystopian” game to Black Mirror and The Hunger Games, while City of Durham MP Mary Kelly Foy tweeted: “I’m disgusted that @thismorning have used people being unable to afford their energy bills as some kind of twisted gameshow [….] Everyone deserves dignity, especially when they’re struggling.” Ofcom – who advise against presenting prizes “as a possible resolution of financial difficulty” –received 170 complaints over the segment.

But this criticism didn’t stop the game returning the following day with its energy bills prize. Schofield boasted that “everybody’s talking about [the game]” before announcing that his “incredibly generous” boss had increased the prize to include all household bills up to £3,000 until the New Year. The segment ended with Schofield shrugging, and saying: “wonder how much of that they can complain about online” – as if revelling in the controversy the game had whipped up. Yesterday (6 September), it was announced that This Morning would be making changes to its Spin to Win competition to remove the ‘energy bills’ prize in response to further backlash.

That ITV executives could allow such a tone-deaf, out-of-touch segment to air should come as little surprise. A 2019 Ofcom report found that TV workers are twice as likely to be privately educated than other workers and minority ethnic representation sits at just eight per cent in senior roles. Just six per cent of TV workers define themselves as disabled – far below the UK working average of 18 per cent. And this certainly isn’t the first-time This Morning have alienated its audiences: in 2018, viewers lambasted a segment named “It’s A Toff Life” which challenged former Made in Chelsea cast member Georgia ‘Toff’ Toffolo to work in a sewage works or KFC. Viewers called this minimum-wage safari “pathetically patronising” as they watched an ardent Tory “slum it like ordinary folk for the day.”

Nor is this the first time that competitions which exploit people’s worries over paying bills have appeared – newspapers have been running them for decades. In 2020, dozens of local news sites owned by Newsquest asked readers to “imagine the relief of not having to worry about how you’re going to pay for your family’s supermarket shopping” as part of a competition titled “win your household bills for the next three months!” Ironically, these competitions are also published by companies that aren’t willing to look after their own employees in an economic crisis. ‘Win your bills’ competitions appear in dozens of local news sites owned by Reach PLC, but that generosity does not extend to Reach PLC staff, who have turned to food banks during a pay dispute with a company that awarded its chief executive a 743 per cent boost to his pay packet. For rightwing papers like The Sun, cash prizes that promise to “ease the cost of living crisis” are part of its political agenda to frame the cost of living as something we can pull through individually with money-saving tips from The Sun’s ‘squeeze team.’

Likewise, ITV’s blunder isn’t just a question of decency, but how popular media is framing the cost of living crisis. The typical viewer of This Morning is a Labour-voting, millennial women, but this hasn’t stopped its hosts posing for selfies with Boris Johnson or interviewing a “straight-talking businessman” with advice on ‘penny pinching’. Clearly, this isn’t tapping into the national mood. More than 100,000 people have signed up to the Don’t Pay protest against energy prices, while people across the country are standing up to greed and corruption. Yet rarely do the people who are part of this fight, nor the issues they’re fighting against, get given proper or genuine airtime. Just today, This Morning faced criticism for interviewing a foodbank worker while advertising a competition with a premium rate photo number.

It’s a far cry from TV host Paul O’Grady’s call to action in 2010, when he used his ITV talkshow to lambast the coalition government. “We should fight for the rights of the elderly, of the poor, of the sick,” he said, “vive la Birkenhead! Vive la revolution!” The following year, Matt Baker would ask David Cameron “how on earth do you sleep at night?” on BBC’s One Show – a move widely celebrated by viewers at the time.

News that household bills have been removed from Spin to Win are welcome, but mainstream media outlets must take the cost of living crisis seriously. Poverty is not inevitable, but people are suffering because of political choices made by the powerful. If they have any respect for their audiences, TV bosses would hold that power to account.

Linkedin
RELATED ARTICLES
OTHER ARTICLES
Rhiannon Adam spent three months capturing an ageing society wracked by division, isolation, and the aftermath of scandal.
Yesterday thousands gathered outside Buckingham Palace after news of the Queen’s death broke.
Rogue landlords are exploiting young and inexperienced renters and leaving them in mental and financial turmoil, reports Niall Hignett.
With skyrocketing rents, packed out viewings, bidding wars and more, renting in London has never been harder.
Birdy Chu reflects on documenting the historic moment in which the territory was formally passed back from the UK to China.
By turning a real-life crisis into daytime television fodder, TV bosses have once again shown themselves to be completely out of touch with audiences.