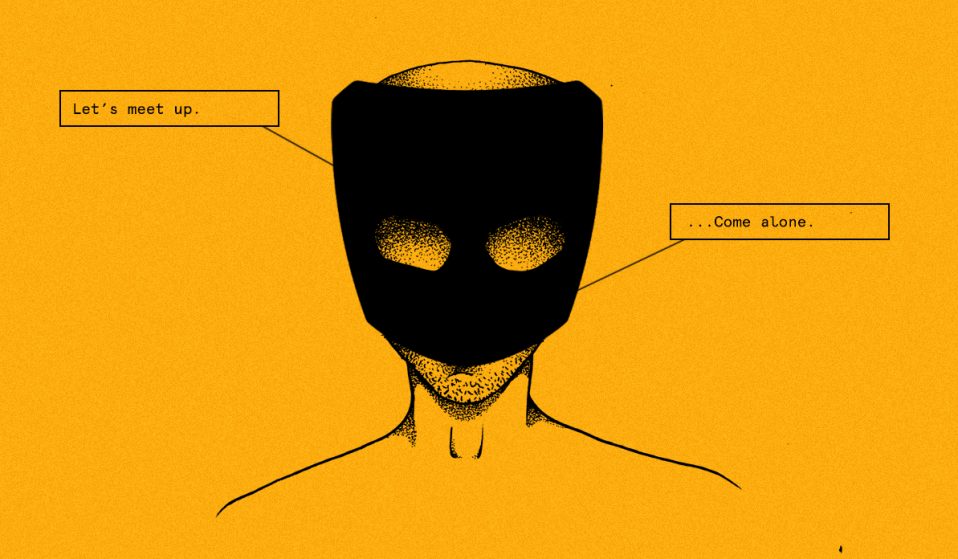 In a country where homophobia is rife, the LGBTQ community has sought solace in online spaces – but even these have been infiltrated, by a dangerous brand of homophobes known as ‘Kitos’.

In a country where homophobia is rife, members of the LGBTQ community have sought solace in online spaces – but even these have been infiltrated, by a dangerous brand of homophobes known as ‘Kitos’.

I am seated in a restaurant in Port Harcourt, Nigeria, waiting for a friend. Outside, the sunset turns the neighbourhood into a soft orange, giving it an almost ethereal glow as the people in the street undertake the daily ritual of returning home from work.

The anticipation I’m feeling reminds of the multiple times I’ve been in public spaces waiting for dates to turn up. I’ve lost count of how many times I’ve been in a scenario like this: sat, observing the inhabitants of a room, wondering if the man about to arrive would like anything at all like his Grindr picture. All the while, I’ll be texting my friends, alternating between telling them about my nerves and providing details on where exactly where I am, to ensure they could locate me if something were to happen.

Because, when I find myself waiting in these kinds of moments, I’m often wondering if the date will turn out to be an actual queer man, or instead a homophobe who’d been masquerading on dating apps with the plan of blackmailing me. Or, even worse, turning up to our meeting with a ferocious mob looking to burn me alive.

This anxiety, of meeting up with someone at the risk of physical harm, is up there with the threat of corrective therapy and forced heterosexual marriages when it comes to the fears that queer men in Nigeria are constantly forced to deal with. This is in part thanks to living in a largely homophobic, conservative society, and in part to the existence of the Same-Sex Prohibition Act (SSPA). Passed in 2013 by Nigerian parliament, the SSPA criminalised a significant part of queer existence – including queer sex, associations with any form of ‘queer agenda’, and even queer allyships. Punishments range from custodial sentences, to death by stoning in certain parts of Northern Nigeria.

This law has led queer people to seek solace and protection in online communities. But even then, these spaces – particularly dating apps – are littered with homophobes masquerading as queer men looking for love or sex, who in fact have the intention of blackmailing victims into extortion, have them outed, or physically harmed.

These people have been christened by the Nigerian queer community as ‘Kitos’. While the etymology of the word isn’t entirely obvious, the threat they pose couldn’t be clearer. Despite attempts to combat them with digital platforms like Kito Diaries – an online portal which helps track encounters in order to provide information on who to avoid, as well as highlight areas with high rates of kito activity – their presence still looms.

Cher, 22, has experienced this first-hand. He recounts an experience that happened a few years back on the condition that I use an alias and keep his identity anonymous. “I was a teenager with hormones and the need for sexual gratification drove me to chatrooms on [the social network platform] 2go,” he says. “I was intrigued.”

Once there, he began talking to a man with whom he quickly hit it off. They arranged to meet at a local bus stop, but once they were together, things quickly began to go wrong. “He was so fine; I was so busy ogling him that I didn’t notice when he led me into a bush path,” Cher remembers.

“Then he asked for my phone. He took out my sim, tossed it at me then asked for my wallet. That was when it hit me that I had been kito-ed. I refused to give him my wallet and that was when he slapped me and two of his friends came out from the bush. They beat me till all I could see was stars. They left me bloodied up and alone in a bush path.”

Cher insists the actions that led to him being kito–ed were “foolish” – a mistake due to his inexperience with the queer dating scene and the dangers that plagued it.

Dafe, a 21-year-old gay man who lives in the Northern part of Nigeria, also believes naivety was to blame when it came to his experience with a kito. He tells me about his first – and sadly not his only – encounter, where his desire not to be outed to his family was weaponised against him by someone he met on Grindr.

After arranging to meet up, the two of them had sex at Dafe’s house. Before they did, though, the man had taken out his phone and left it on the table. “I didn’t really [think about] it much at the time,” Dafe says. “Only for this guy to then say that he videoed everything, and would show my mum if he didn’t get money or something from me. At the time, I was scared and naive, so I gave him some of my shoes and the money I had in my wallet.”

Dafe goes on to recall how, after this, the guy didn’t leave. Instead, he called his friend – who had been waiting nearby – to come in and steal even more items. “This guy went outside and literally brought in his friend that was waiting for him outside to come and take something too.’”

Kitos working with accomplices is not unique – many of them work together and have been known to develop networks where they pass information such as details of secret queer parties, locations queer people frequent, as well vulnerable queer people in the locale to target.

How deep these connections and networks run remain unclear. But, according to testaments on Kito diaries, kitos have been known to develop strong interstate connections with whom they share details of queer people with other kitos, who then weaponise this information against their victims. For example, in an instance where someone may have resisted an extortion attempt and successfully escaped, Kitos will double down and attempt to avenge their comrade. Likewise, in situations where someone may have have been successfully kito-ed, the person in question will either be left alone (on the assumption that they might be more careful now), or kito-ed again if the feeling is that they’re still vulnerable.

All of this means that, as you wait to meet every new potential love interest, you can’t help but think of the very real possibility that you may not leave unharmed. This fear leaves the dating scene, which is already fraught with dangerous heteronormativity and internalised homophobia, hopeless for many. Even as queer people make attempts to combat this epidemic – the creation of supportive group chats, platforms like Kito Diaries, and efforts to teach younger queer people what we have learnt – there is still much work to be done.

With the dangers that define life offline and online as a queer Nigerian – whether you’re in search of a relationship, a hookup or simply seeking a connection in the LGBTQ community – navigating the queer dating space in Nigeria becomes something of a tasking job that requires so much and gives little. It’s a sentiment that Cher expresses perfectly.

“I still get scared meeting new people,” he says. “It would take a lot to get me alone with a gay guy. I tend to be extra cautious. It ruined my last relationship. I am afraid.”

Linkedin
RELATED ARTICLES
OTHER ARTICLES
After news broke last week around an expected reversal of the 1973 landmark law that made abortion legal in the US, protestors gathered in the UK in support of American women.
Photographer Robin Graubard’s debut book offers an unflinching record of turbulence and change across the Balkans.
While protests over abortion rights rage in the US, access to abortion services is still almost nonexistent in parts of the UK.
A group of Ukrainians living in Poland are helping Ukraine withstand Russia’s brutal invasion by buying supplies and shipping them directly to the war’s frontlines.
Following the release of his latest album God Don’t Make Mistakes, the rapper talks horror villains, police brutality and being unafraid to show his vulnerable side.
Photographer Phyllis Christopher recalls capturing sex and protest at a time when the city had become a haven for the queer community.