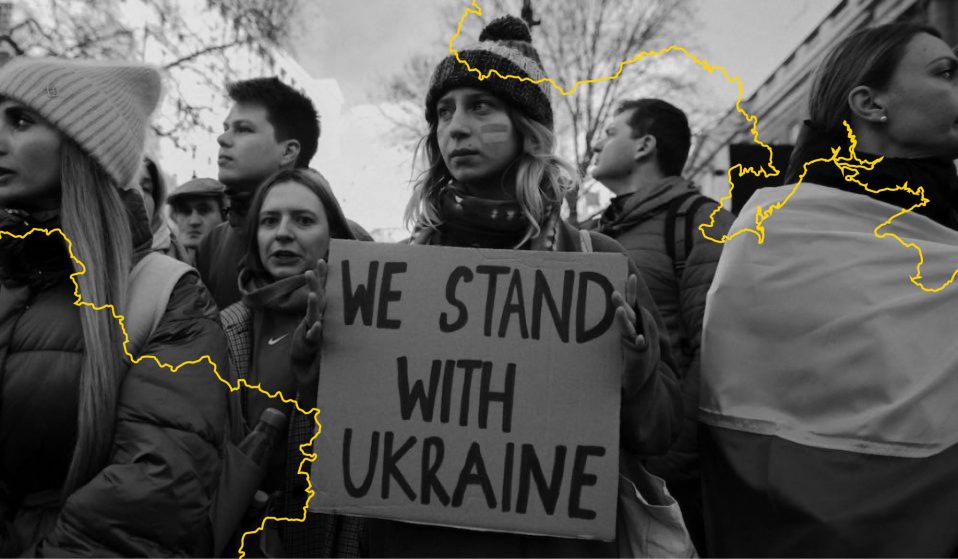 With two million displaced by the war, people scrambling to find safety are being met with callous immigration systems and racism at the border.

With two million displaced by the war, people scrambling to find safety are being met with callous immigration systems and racism at the border.

It’s been almost two weeks since Russian President Vladimir Putin invaded Ukraine. The world has watched in horror as hundreds of thousands of Russian troops have poured across the border and started their slow advance across the country. The indiscriminate bombing and shelling of civilian areas in cities such as Kyiv, Kharkiv, Kherson and Mauripol have been broadcast on a loop, with images of bombed-out apartments, hospitals, kindergartens and playgrounds splashed across front pages. We’ve watched live streams of Russian forces attacking Europe’s biggest nuclear power plant and the bombing of Ukraine’s civilian and military infrastructure.

People being shelled as they flee through humanitarian corridors or sheltering under bridges from Russian artillery has become a daily occurrence. There is no end of untold horrors streaming out from the conflict. The UN have confirmed that hundreds of civilians have been killed, though have conceded that is likely to be a vast undercount. The number is likely to be running into the thousands.

The world has reacted with widespread condemnation of Putin’s invasion. Many, including UK, USA and the EU, have heavily sanctioned Russian businesses, with several Russian banks having been removed from the Swift banking system last week. Sanctions targeting individual Russian business people have come into effect across Europe with assets being seized and frozen. While NATO has ruled out imposing a no-fly zone across Ukraine on the basis that it will effectively amount to a declaration of war on Russia, countries across the West have sent millions of dollars of military hardware and aid to the country to bolster their fightback.

At the time of writing two million people have fled the violence, with the vast majority (over one million) making their way to neighbouring Poland, the border of which lies just 60 miles from the Ukrainian city of Lviv. One of the EU’s top diplomats, Josep Borrell, has warned that five million people could seek to flee if the Russian invasion continues.

In reaction to the crisis, the EU has implemented emergency protocol which has granted Ukrainian refugees immediate right to live and work across the EU without having to go through complex asylum procedures. This historic decision is the first time the protocol (invoking the ‘temporary protection directive’) has been used since it was created in reaction to the Kosovo crisis in 2001.

Many have been quick to point out the huge disparity in the reaction of EU states to refugees from Ukraine and those who attempted to reach the bloc from other conflicts. Parallels have been drawn between those fleeing war in Ukraine and the over one million people who in 2015 attempted to reach safety and security in Europe fleeing countries and conflicts in the Middle East and across the African continent.

Here in the UK, there has been significant bluster from the government where aiding Ukrainian refugees is concerned. Thus far, the government has ruled out offering similar protections to those implemented by the EU, but Prime Minister Boris Johnson has stated the UK would “receive those fleeing”. At the time of writing, it has been revealed that so far just 300 visas have been offered to those attempting to reach the UK to escape the conflict.

Two weeks ago, Boris Johnson told me that the UK would “receive those who are fleeing” from Ukraine.

This government should be ashamed.

It comes as the government continues to push through its Nationality and Borders Bill, which campaigners say will further enforce the Hostile Environment and will make it even more difficult for those seeking asylum to do so.

There have been numerous stories of people being turned away at the border with French interior minister Gerald Darmanin stating on Sunday that it was “inhumane” for the UK to do so.

The scale of the humanitarian crisis unfolding is hard to fathom. Each horrendous image, harrowing news report or lacklustre policy announcement represents the stories of hundreds, if not thousands, of people. That’s why today we’re launching Search for Sanctuary – a new series looking at some of those stories and the people behind them.

As part of the series, we’ll hear first hand from those caught up in the UK’s draconian immigration system as they attempt to flee, and helping family members escape Ukraine. We’ll meet the people who have made the treacherous, dangerous journey across the border, only to face violent attacks from far-right racists. We’ll explore the realities of humanitarian intervention and look at how the UK government is preventing people from reaching safety.

Read the first piece in the series, in which a Ukrainian living in London shares her battle with the Home Office, who are currently preventing her two younger sisters – aged eight and 19 – from entering the UK, here.

Linkedin
RELATED ARTICLES
OTHER ARTICLES
Cindy Campbell recounts how her brother ushered in a new era of musical culture at a party she held in the Bronx in ‘70s.
In his 2008 series, the photographer pictured himself as Angela Davis, Martin Luther King Jr., Malcolm X, and other prominent figures.
Yesterday thousands gathered outside Buckingham Palace after news of the Queen’s death broke.
Ahead of the release of their first collaborative album, the producer and rapper talk psychedelics and the state of UK hip hop.
As the Scottish government announces a rent freeze, an activist with Living Rent who fought and won shares how they did it, and what must come next.
By turning a real-life crisis into daytime television fodder, TV bosses have once again shown themselves to be completely out of touch with audiences.