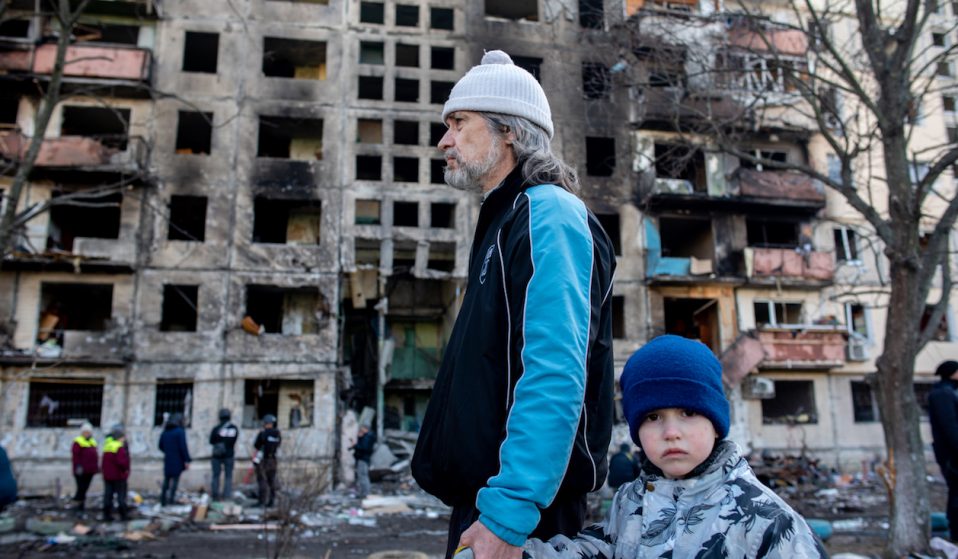 Photography © A father and son walk past a residential apartment destroyed by a Russian air strike in Obolon, Ukraine (Photo by Seth Berry)

Putin’s indiscriminate attacks have seen the bombardment of Ukrainian cities and residential buildings.

Putin’s indiscriminate attacks have seen the bombardment of Ukrainian cities and residential buildings. Many are now living in fear that the offensive will only intensify.

In the small village of Markhalivka, forty minutes from Central Kyiv and just outside city limits, scenes of destruction paint the landscape, where a Russian airstrike flattened a block radius of homes on 6 March. Among the sprawled debris are children’s shoes, books, housewares, and mangled vehicles. Here, six people died, including a child.

Along the dirt road between the quaint homes now reduced to rubble nearby residents assessed the damage. “We were lucky,” one told me. “We still have our homes, but they don’t,” gesturing to the destruction. “Nowhere is safe.” 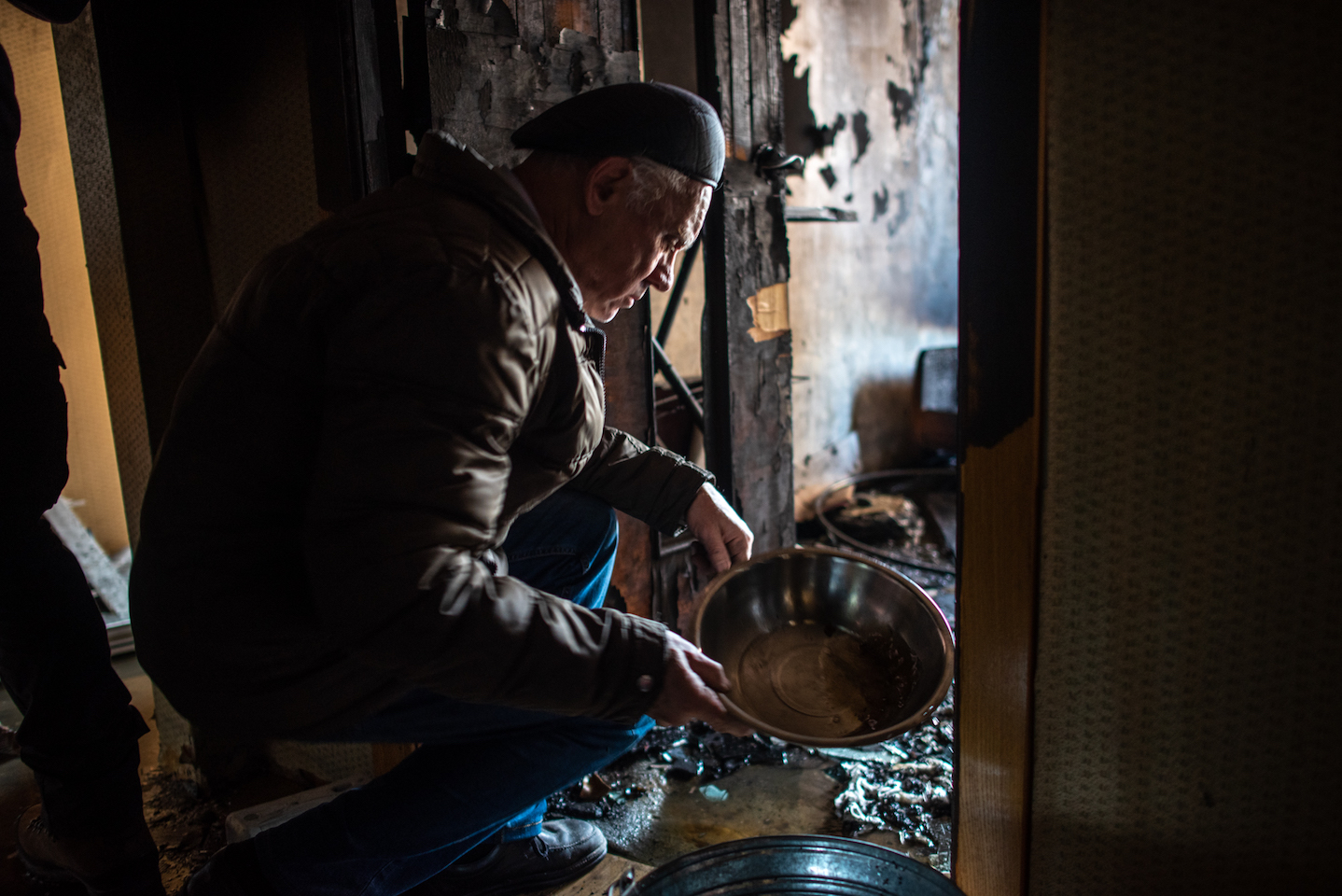 Now, less than two weeks later, Russians are targeting residential areas within city limits – some only ten kilometres from the city centre. On consecutive days, 14 and 15 March, at dawn, residential buildings were hit by airstrikes. Later, a major metro station, Lukyanivska, was struck. At least four have died from these events, Mayor Klitschko said. Many fear the strikes will only intensify.

In the apartment that was struck by an intercepted missile in Podil’s’ky District, where shrapnel ripped through the concrete walls, and fuel caused fires to blaze through homes, swaths of residents packed up their belongings this week from their damaged apartments and relocated to another section of Kyiv, still in fear of being hit again. 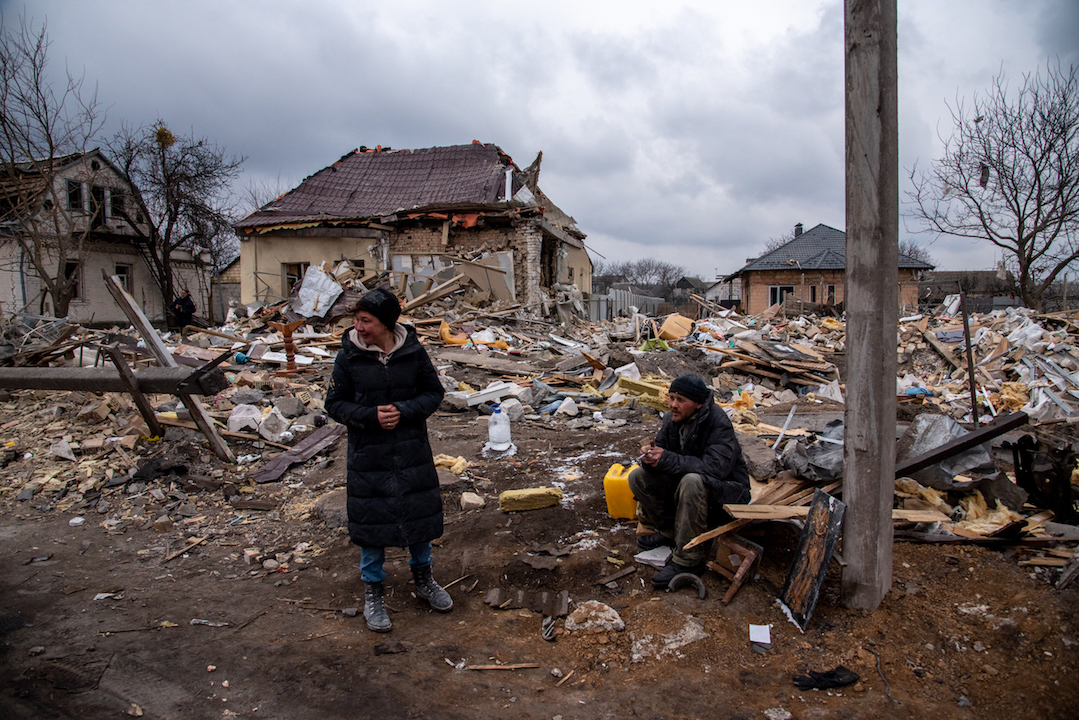 Residents in Markhalivka, Ukraine, assess the damage down by a Russian air strike 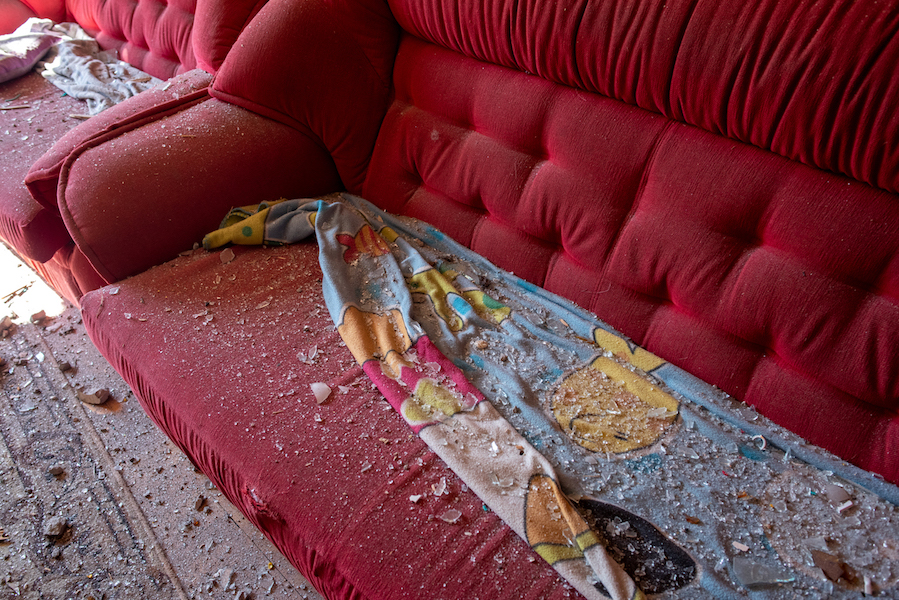 A couch covered in shards of glass in an apartment which was destroyed when an intercepted Russian air strike hit in Kyiv, Ukraine

Daria Ivanova, 40, a school teacher of traditional Ukrainian folk art, wept as she removed paintings from her destroyed apartment.  Shattered glass covered the floor and couches in her living room. She stacked frames of art on a chair, choking back tears as her father, who came to help her pack, showed me her personal artwork.

“I will now live with my father, in Kyiv, with my children and animals,” she says. “In 2014, I moved from Donetsk to here. I thought I would be safer, but I’m not.” 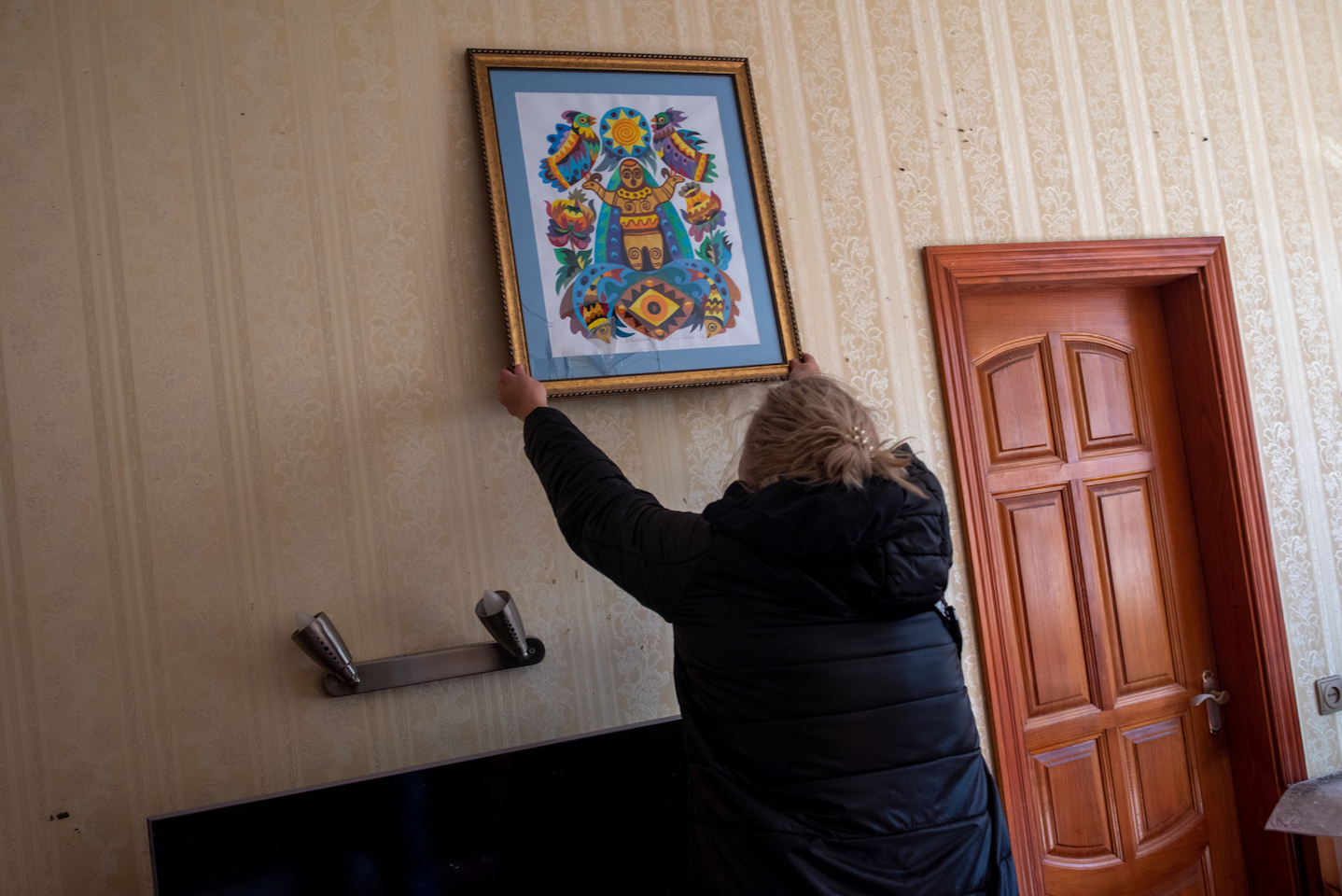 Daraya, 40, a school teacher of traditional Ukrainian folk art removes a frame from her destroyed apartment which was hit by an intercepted Russian airstrike in Kyiv, Ukraine 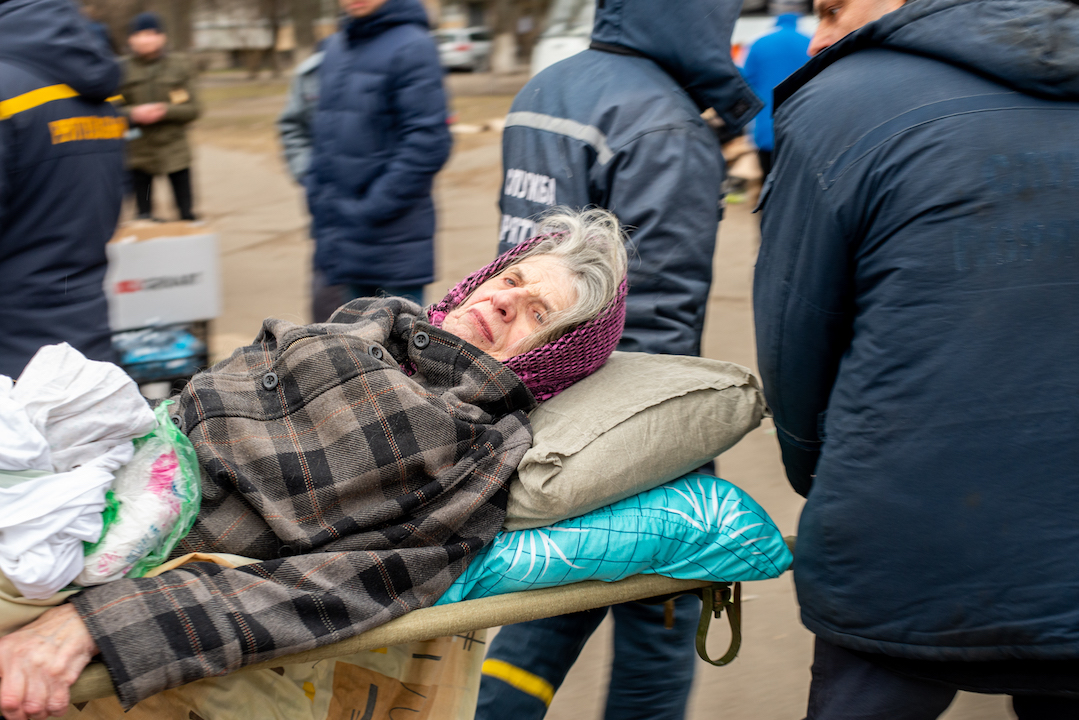 At another apartment in the same complex, flames scorched the rooms black and water leaked from damaged plumbing onto the floor. The young woman living there tried to salvage what she could from a closet while others swept the water and glass from the floor.

In Obolon, a community perched along the Dnieper River, just North of central Kyiv, a building was struck by another Russian airstrike on 15 March. The central staircase collapsed where the missile had made impact. Many residents were stuck in smouldering fires. Some climbed up onto the roof and down the opposite stairway to escape, while others had to be evacuated by fire ladder. It is evident that the Russian military is enacting a war of terror, attempting to displace the brave souls who decided to stay in Ukraine. 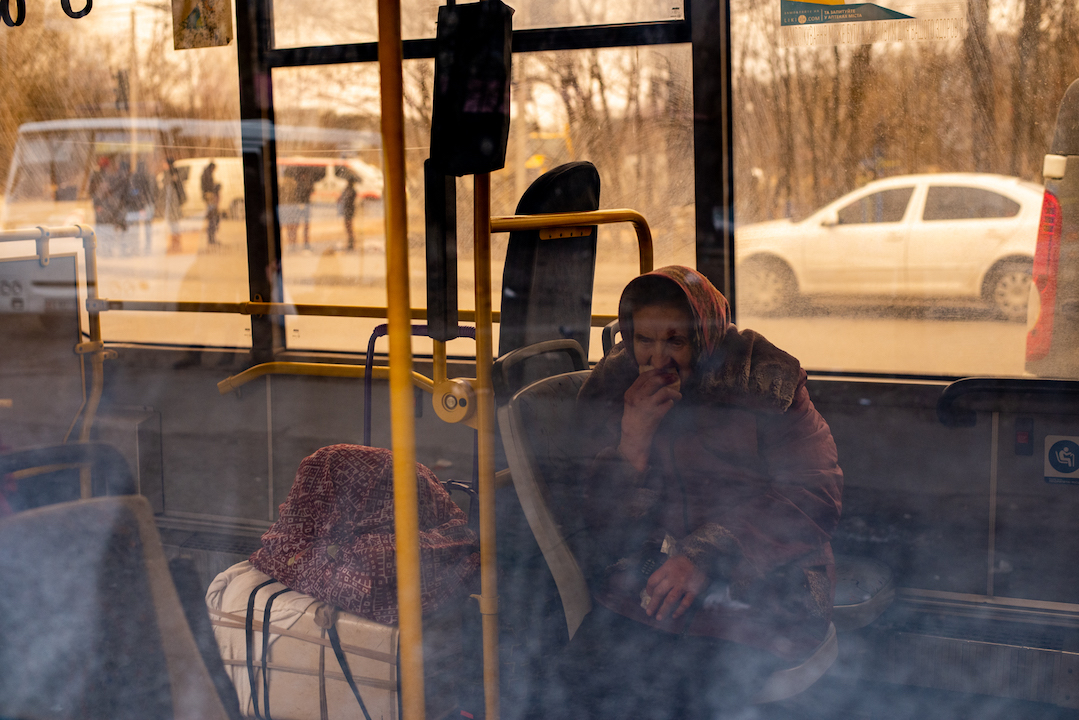 An elderly woman on a public transit bus evacuating citizens from Iripin, Ukraine 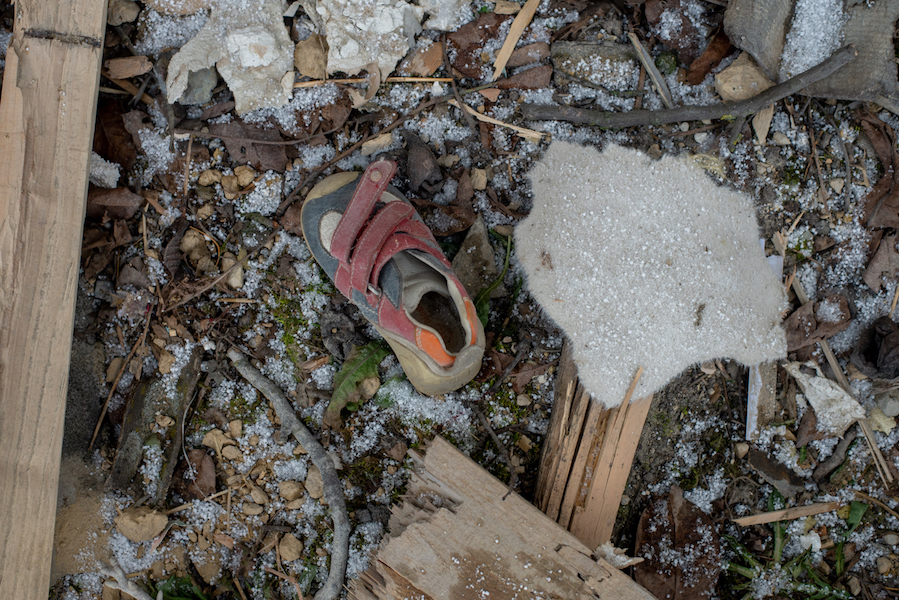 A child’s abandoned shoe at the site of a Russian air strike in Markhalivka, Ukraine

Fighting continues on the frontline near Kyiv, in Iripin, where an American journalist was killed this week. The mayor of that city has since closed off access for the press. Civilians are evacuated every day as they flee the violent combat between the Ukrainian and Russian militaries. Many who arrive at the makeshift care facility at the entrance of Iripin are elderly and injured. They are assisted by Ukrainian medics and local volunteers who eventually send them into central Kyiv on public transit buses.

Kyiv, a once vibrant metropolitan city, is now deserted. Less than a million of the four million original residents are here living in fear of Russian airstrikes and infiltrators. Civilian volunteers with guns and soldiers alike are stationed at checkpoints and roadblocks meant to dissuade tanks, creating a maze through downtown streets. Locals wait in long lines at ATMs and markets, where basic necessities like water and cooking oil are running low. 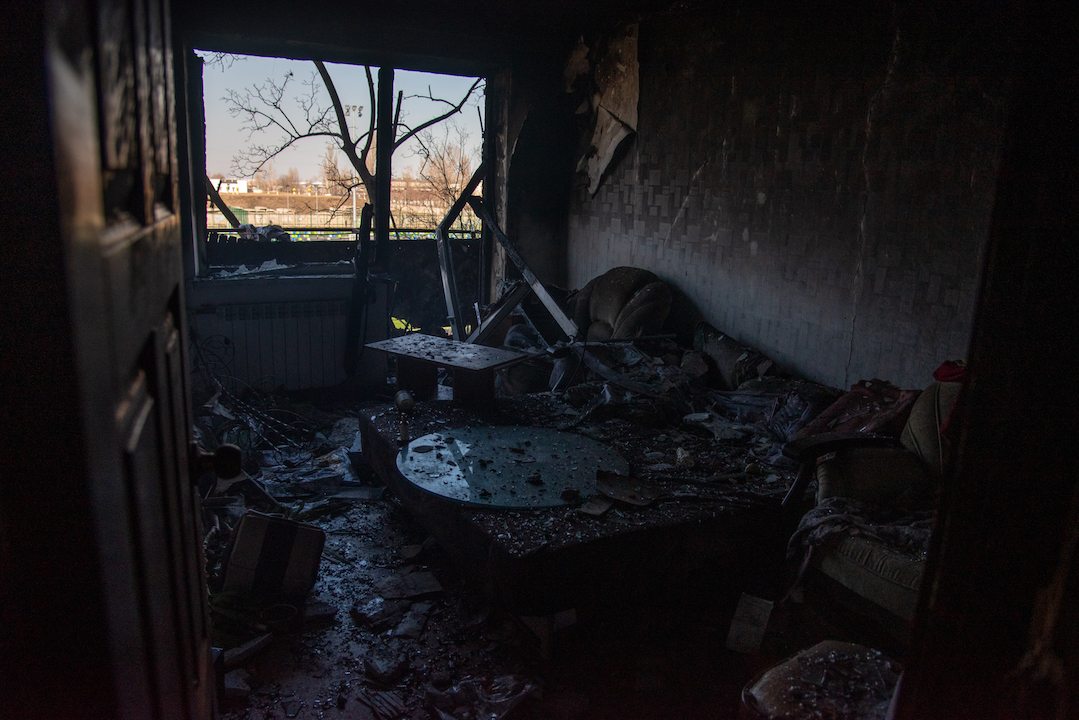 Inside a damaged apartment that was hit by a Russian air strike in Obolon, Ukraine 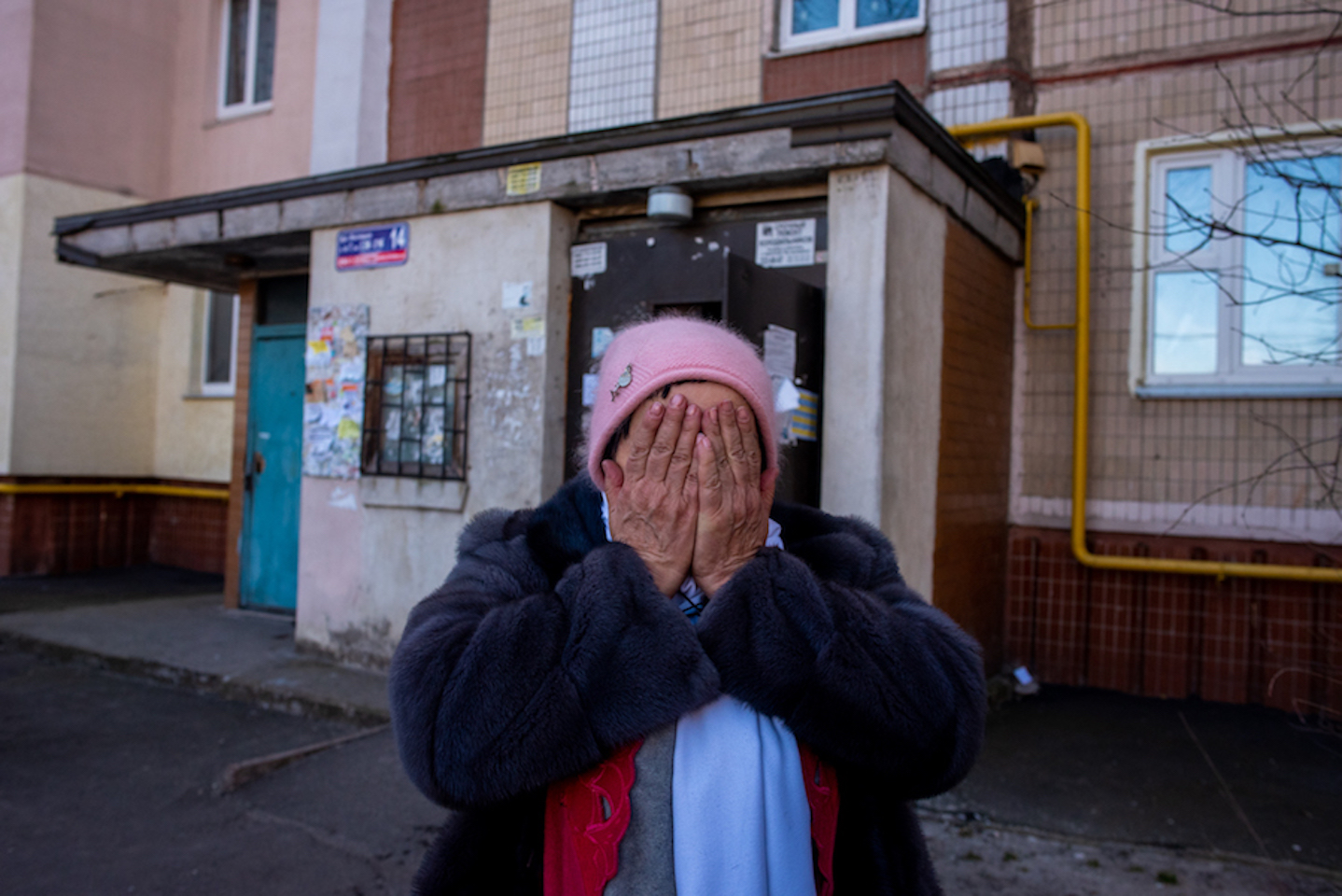 A resident of an apartment building hit by an intercepted Russian air strike covers her face in grief in Kyiv, Ukraine

The nearest Russian air strike to Kyiv’s city centre hit the Lukyanivska metro station, a usually bustling hub, on 15 March. At least one died and many small businesses were demolished. The subway station, which is harbouring civilians using the underground stop as a shelter, is still in operation.

Because of the recent attacks so close to the central district, the Mayor of Kyiv, Vitali Klitschko, implemented a 35-hour curfew. Yesterday (16 March), explosions were heard across the city while sirens wailed, beckoning civilians into bunkers. As Russians grind on toward Kyiv, reckless attacks on civilians seem to be an increasingly common, fear instilling ploy, wreaking humanitarian havoc across the city. 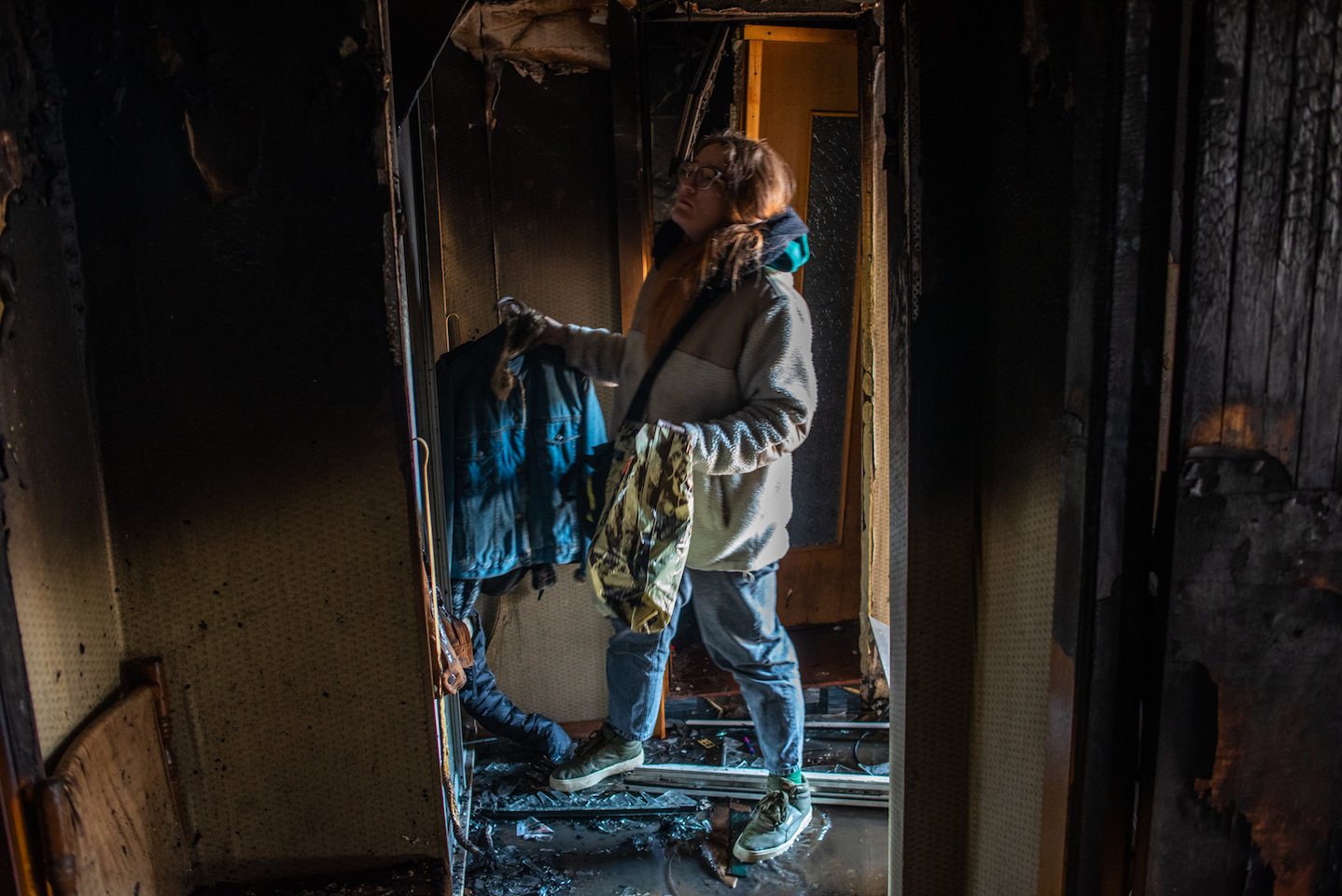 A resident of an apartment building in Kyiv, that was hit by an intercepted Russian rocket, takes belongings from her closet. Her apartment his now unliveable 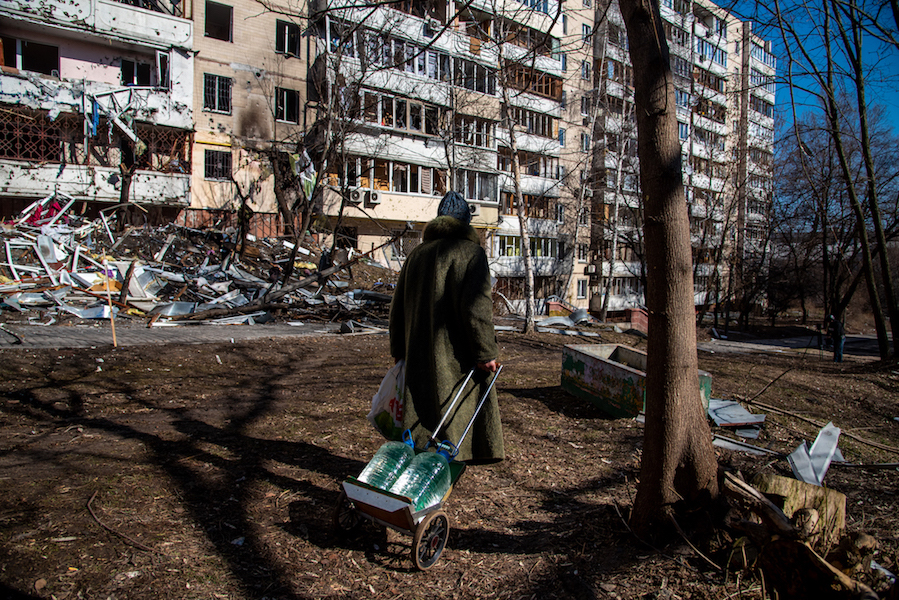 An elderly woman carries water back to her apartment in Kyiv, which was hit by an intercepted Russian rocket 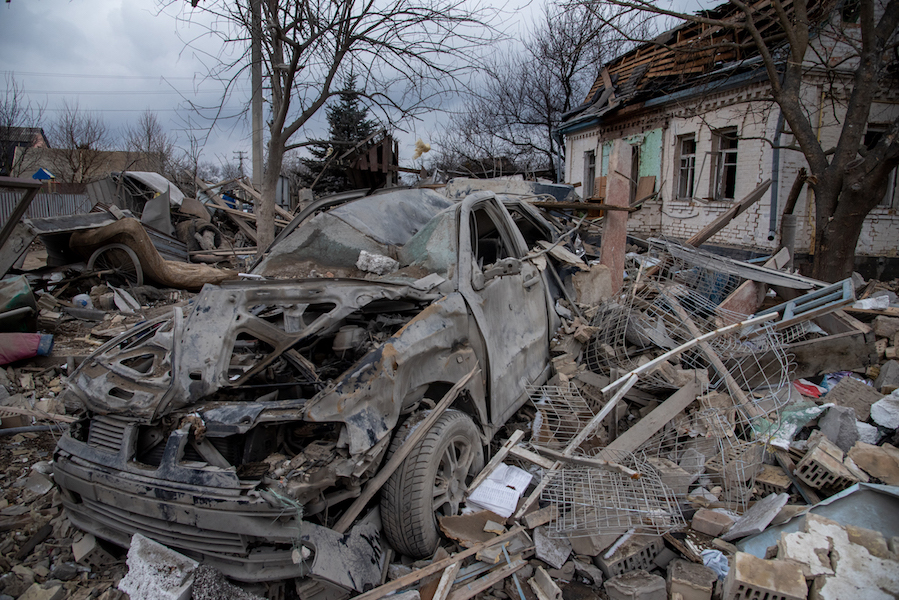 A burnt car and destroyed home where a Russian air strike hit in Markhalivka, Ukraine 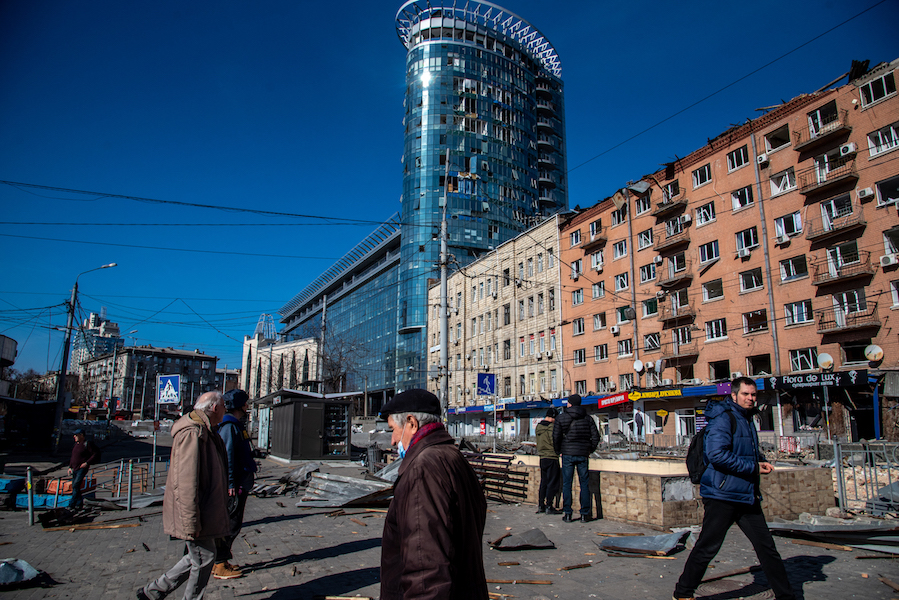 Debris from a Russian air strike at a major metro station in Kyiv, Ukraine 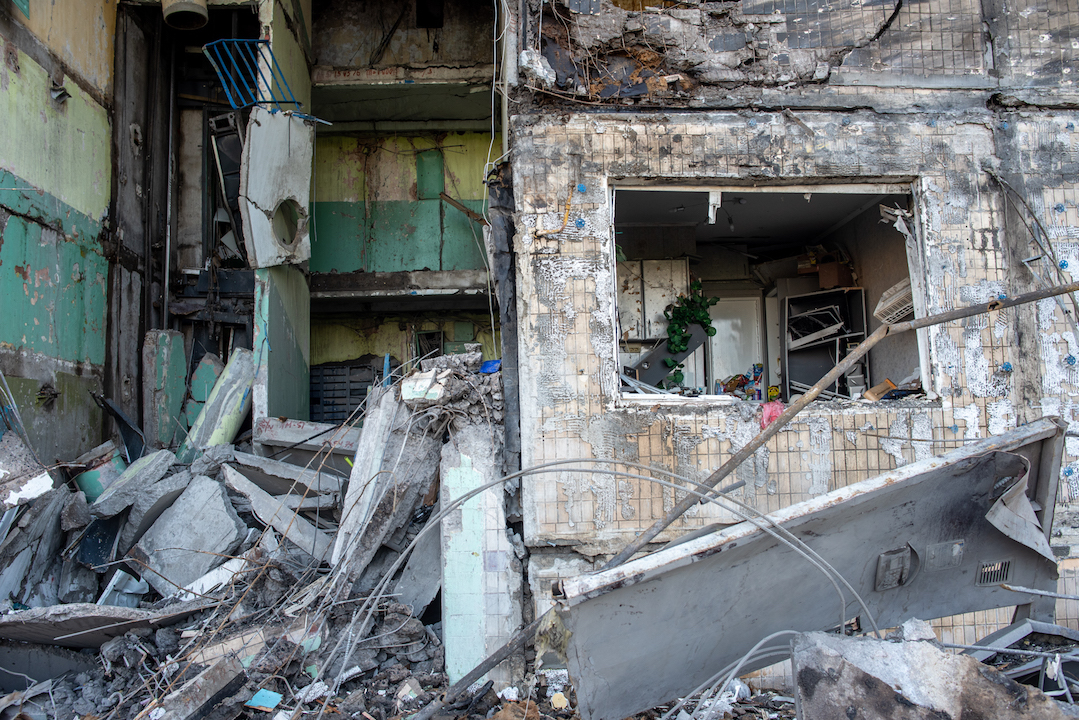 A demolished stairwell and apartment of a residential building that was hit by a Russian air strike in Obolon, Ukraine 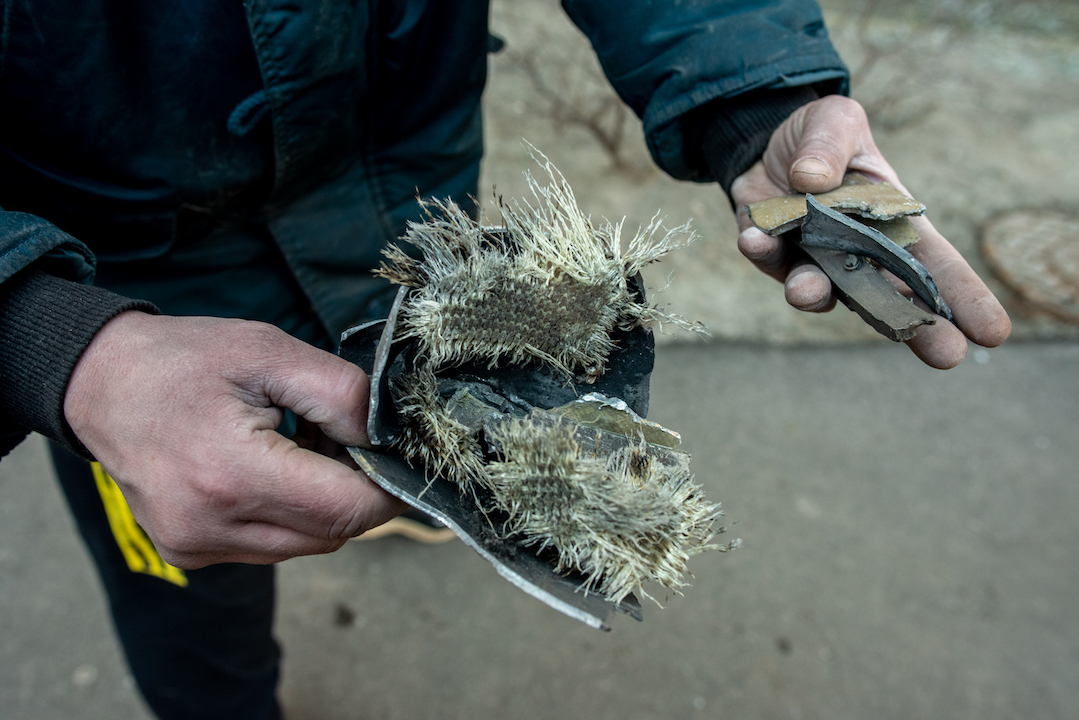 A man holds scrapnel from an intercepted Russian air strike which hit a residential building in Kyiv, Ukraine 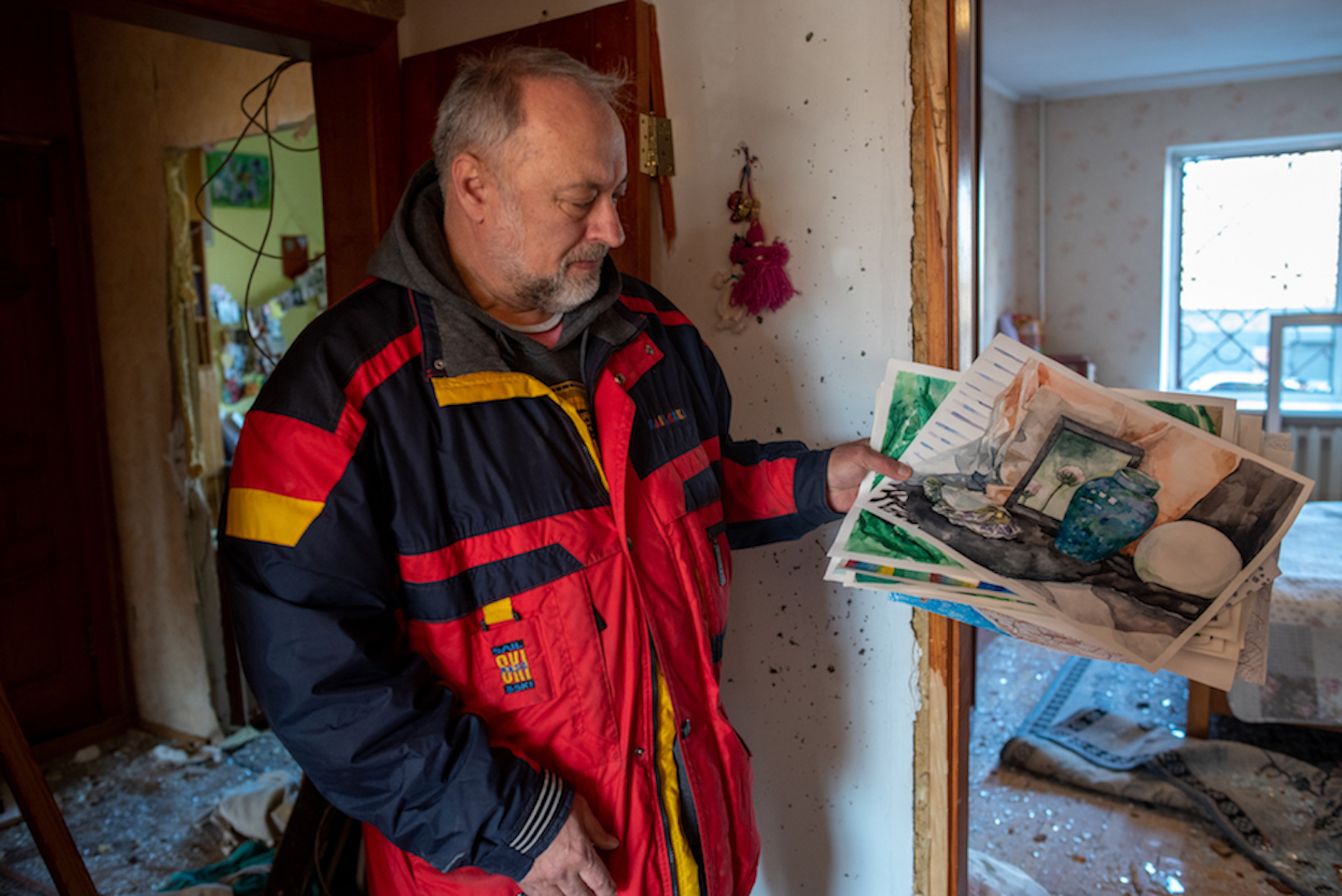 A residential building in Kyiv in the district of Podil’s’kyi, northwest of the city centre was hit by an intercepted missile rocket strike in the early morning, 5 March. One confirmed dead and many apartments beyond repair

Linkedin
RELATED ARTICLES
OTHER ARTICLES
As the Criminal Bar Association enters its fifth week of action, criminal barrister Russel Fraser explains why the legal professionals have walked out and how action is likely to escalate.
Following the release of his latest album, the rapper talks about finding a new approach to songwriting, attitudes to poverty, and why his music is more than a political statement.
From the chip shops, to the bingo parlors and burlesque dancers, photographer Mike Coles remembers capturing scenes of holidaymakers by the English coast.
Students are being left to languish in unsafe housing, in some cases leading to serious health complications.
The author discusses her new memoir, which offers a sobering reflection on the racism and otherness she’s experienced along with a joyful celebration of her culinary heritage.
To mark the premiere of his new documentary on surfing giant Gerry Lopez, the filmmaker and former pro skateboarder sits down to share his unique brand of wisdom.