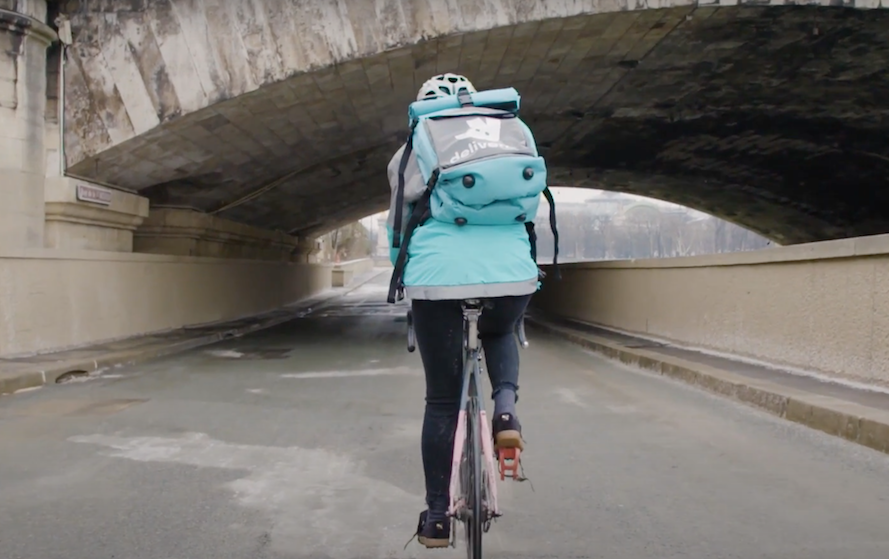 The issue of workers being denied toilet dignity has worsened during the pandemic. And for female couriers, in particular, it’s taking a toll on their mental wellbeing and ability to work.

The issue of workers being denied toilet dignity has worsened during the pandemic. For female couriers – who are disproportionately impacted by the problem – it’s taking a toll on both their mental wellbeing and ability to work.

Phoebe, a courier based in London, recently found herself reduced to tears on a shift. She was in Costa Coffee, begging staff to let her use their bathroom, but was repeatedly refused. It’s not the only time she’s found herself pleading with people to let them use their toilet during the pandemic: “You do end up crying and shouting at people,” she says. “It’s just degrading.”

Stories like Phoebe’s are acutely familiar to most couriers, as is the denial of their experiences by the companies they work for. Just last week, in an attempt to dispel the negative media the company routinely attracts, Amazon’s ‘news’ account tweeted: “You don’t really believe the peeing in bottles thing, do you? If that were true, nobody would work for us.” The reality is that Amazon is well aware this is happening and will fire drivers who are caught peeing in public.

While inadequate access to toilets is something that 70 per cent of all professional drivers in the UK experience, it’s an issue that disproportionately impacts women, who cannot relieve themselves as discreetly and face a heightened risk of attack while doing so in public.

Couriers have a legal right to use the bathroom at commercial premises, but increasingly since Covid, venues have been denying them access. Compounding this is the fact that many public bathrooms have been closed over lockdown.

Even before the pandemic, couriers had to rely on locating public toilets or spending money to use toilets in shops or cafes. The workload, surveillance and targets couriers face usually means that taking a long enough break to find and use a toilet simply isn’t an option.

Wow this feels just like my ex gaslighting me tbh, thanks @amazonnews x x https://t.co/ECTbnDRQjm

Yet rather than criticising the corporations responsible, tabloids have instead chosen to shame drivers who find themselves in demoralising situations. Earlier this year, a picture of a John Lewis driver urinating behind a van went viral before being callously reported in the news, while similarly, the Metro gleefully ridiculed an Amazon driver for defecating in a “horrified” woman’s garden.

“Seeing all of these types of ‘scandalous’ articles has been extremely dehumanising,” says Fran Scaife, the Independent Worker of Great Britain’s (IWGB) Women’s and Non-Binary Officer and a courier with the company Stuart. For women, in particular, the lack of access to toilets has reportedly worsened long-standing conditions, such as diabetes and irritable bowel syndrome, or led to illnesses such as bladder infections. Fran says that it has prevented some women from going to work for weeks – often, as a result of being on their period.

Since the pandemic, “They [courier companies] drill it into us that we must stay clean and sanitised between each delivery,” says Fran, noting that there have been Covid cases directly linked to the fact that drivers are not able to wash their hands on shift. “But since we first reported the toilet issue over a year ago, we are not much further forward.”

Kenya Scarlett, another courier, says that she grew so uncomfortable with being unable to use the toilet at work, that it started to impact her mental health, and led to her taking a month off work. Her shifts were sometimes 12 hours a day, with 20 minutes unpaid break – barely enough time to find an accessible toilet. “I was crying on my shifts, and the job, overall, was overwhelming,” she says.

When Kenya was working in her job last October, she was able to “sneakily go to the pub loo,” but in the second lockdown, finding a toilet has become even more of a challenge. She recalls one incident in which she was reduced to “begging” NHS staff to let her use a hospital toilet.

“I had tears in my eyes, I needed to go so bad, and I was on my period, and the person working there said no,” she says. “I wouldn’t leave, so she got security, who eventually let me go. It shouldn’t have had to get to that point.”

“It’s not a nice feeling, being rejected for something that just seems like a basic human right,” continues Kenya. “Couriers have been forced to change their tampons in the streets. It’s not only a mental health issue – it’s a health and safety issue.”

To prevent herself from needing to use the bathroom, Kenya resolved to not drink water on shifts. “I started becoming delirious, dehydrated and not having the energy to cycle,” she says. Kenya then started experiencing pain in her legs, because her muscles didn’t have enough water to replenish themselves – another reason she was forced to take time off.

Because Kenya is on a zero-hours contract, this leave was unpaid. “They’re more than happy to give you the time off, and give the money to someone else, rather than actually caring about my wellbeing,” she says.

Given that the courier industry is so overwhelmingly male-dominated (93 per cent of Deliveroo drivers, for example, are male), female couriers often don’t feel able to seek help from their male managers. Phoebe says that suffering from endometriosis means she cannot work on the first day of her period, but when she spoke to her male managers about it, “they just didn’t get it,” she says.

Being one of only two female couriers that work at her company, Phoebe says she feels pressure to be “even better” than her male colleagues, and to not make it seem like her “needs are more complicated than theirs”. This has led to her going into work while suffering from endometriosis: “If there’s no legal or contractual protection over your hours, you are going to put yourself in dangerous positions,” she says.

The lack of access to toilets, coupled with her endometriosis, has forced Phoebe to cut back on her working hours. “The thing is, I love the job. I love being outside, I love exercising loads,” she says. “But, the lack of pay and the lack of support is just pretty crazy.”

Fighting for workers’ rights and protection is particularly hard for couriers working for behemoths like Amazon, Uber and Deliveroo, where all contact with the company is made via an app. “Most of the time, you’re put off from bothering to complain,” says Kerry, who works for Deliveroo. “Especially things that are personal – you don’t feel like you’re ever going to get a response.”

Deliveroo drivers are expected to go offline and lose money for the period in which they are trying to locate a toilet. “It definitely privileges people who are healthy, or are able to go for a piss in the street, like men tend to, and people who don’t have periods,” says Kelly.

Because Deliveroo maintains that its workers are self-employed, the company is essentially allowed to wash its hands of any responsibility around working conditions. Earlier this year, Uber was forced to shift its policy and now treats its drivers as workers, but did not extend this to UberEats couriers. Anger over the poor working conditions Deliveroo drivers face reached a tipping point earlier this week, as strikes and protests organised by IWGB saw hundreds attend.

Riders across the country are demanding workers rights, safety at work, and an end to poverty pay.#rights4riders#takenforaride@NadiaWhittomeMP @IanByrneMP @PeoplesMomentum pic.twitter.com/c2ew3cnnwP

Couriers are coming together to support one another where companies are failing them. Earlier this year, Fran established the Female and Non-Binary Courier Committee, made up of workers all over the country. As a group, they’ve been contacting councils to get them on board with cracking down on restaurants who aren’t letting couriers in, and compiling a document detailing public toilet access.

And toilet dignity is just the tip of the iceberg. The committee is giving women and non-binary couriers a space to talk about the harassment, sexism and racism they may experience in the workplace – and vitally, making them feel seen and represented in an industry vastly made up of men. “It’s a really great support network and strong community,” says Kenya, who was recently made the committee’s officer.

Following the recent changes to Uber’s policies, Kenya is optimistic about the future, believing it won’t be long before other companies are forced to follow suit. “The tide is changing,” Kerry agrees. By keeping the pressure on, the hope is that companies will finally begin to see toilet dignity as a fundamental human right workers are owed.

Linkedin
RELATED ARTICLES
OTHER ARTICLES
Tristan O’Neill’s shots of dancers caught in moments of reverie at the height of rave’s golden age are a testament to the UK’s legendary club culture.
Photographer Becky Tyrell went down to the fading banger and stock raceway to meet a community desperate to keep it alive.
Social prescribing connects people with non-medical support to improve their health and wellbeing – but some experts worry it’s just a stick plaster solution.
A new exhibitions brings together the work of photographers who documented the deep unrest of these pivotal decades.
A new law change is enabling Britain’s donor-conceived children to know the truth about their origins – but campaigners say the fertility industry must do more to protect people.
A new film from Berghaus traces the story of Adam Raja, who left behind a turbulent upbringing to discover the healing power of climbing.