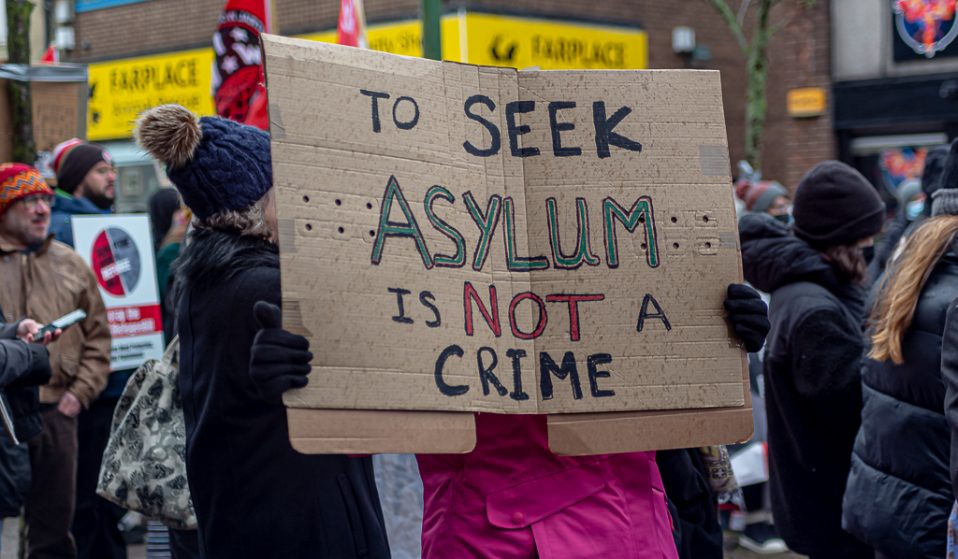 Campaigners aren‘t giving up the fight to close a detention centre which they say endangers women looking for safety.

Campaigners aren‘t giving up the fight to close a ‘barbaric’ detention centre which they say endangers women looking for safety.

In April 2011, Agnes Tanoh fled her home in Côte d’Ivoire, where civil war had broken out. Her position as assistant to the First Lady compromised her life and she was told escaping the country was her only chance for survival. With a son and daughter already living in the UK, Tanoh used her diplomatic passport and valid visa to get into England, only expecting to stay for a few months until the dangerous conditions in her country calmed.

But the war in Côte d’Ivoire waged on, even as her visa was due to expire. When she contacted the Home Office to find out what the next steps were, she was told she would need to apply for asylum.

“The Home Office sent me to Croydon to claim asylum and then to accommodation in Manchester, far from my family in Portsmouth,” Tanoh tells Huck. “I went to court and the judge granted me leave to remain in October 2011.” But the decision was revoked, and she was made to report weekly to the Home Office.

“In March 2012 I went to report as usual, and I was arrested,” Tanoh says. “I was expecting sanctuary and protection and found myself in prison. They told me when they dismissed my leave to remain, that my solicitor did not appeal the decision – even though he had assured me he had done.”

Tanoh was held for two days in a holding centre, before being placed in a van to be taken to Yarl’s Wood. “When you are arrested, you don’t know what is going to happen to you,” Tanoh says. “Your phone is taken from you and not being able to speak good English, I couldn’t even ask for someone to explain what was happening to me.”

Hidden within an industrial estate and surrounded by gates, Tanoh finally got her first glimpse of Yarl’s Wood and felt a sense of dread. At the office gate, Tanoh was kept for four hours, being checked by guards, before being marched down a long corridor to her shared room. “I was so sad, so worried,” recalls Tanoh. “So unsure of what I was going to do, who I was going to call, how long I was going to stay there.”

Many of the women like Tanoh who were locked up in Yarl’s Wood are set to be moved from that facility to Derwentside Immigration Removal Centre – a women’s-only detention centre in Hassockfield, County Durham. In 2020, Yarl’s Wood, a site historically used as a women’s immigration removal centre, was ‘repurposed’ as a short-term holding facility for Channel migrants. At the end of last year, there were fewer than 20 women and an estimated 300 men in the centre. These women, along with others who have had their immigration and asylum claims refused, have now been transferred to Derwentside to await deportation.

In January, 150 activists gathered outside Derwentside, walking around the perimeter. They were protesting the opening of the centre with signs reading “Seeking Sanctuary is not a Crime” and “Homes Not Prisons”.  These campaigners argue that detaining women with insecure immigration statuses is an inhumane practice that imprisons women who haven’t committed a crime. They have called the latest facility in Hassockfield barbaric and cruel.

The opening of Derwentside is just one of the more recent outcomes of the Hostile Environment that the government continues to push for. Home Secretary Priti Patel’s Nationality and Borders Bill, said by many to be a racist piece of legislation that will further criminalise asylum seekers, is currently at the Committee stage in the House of Lords, nearly ready to be written into law. Writing in Huck, Nadia Hasan, the communications officer of the Joint Council for the Welfare of Immigrants, said of the bill: “These violent proposals are in response to an imaginary crisis, relying on falsehoods around the illegality of channel crossings and threatening to remove or criminalise refugees who arrive here ‘without permission’.”

Even though protesters have shown up monthly since summer 2021 as the site was constructed, the detention centre opened its doors to women in December 2021. In a Home Office statement, it was said that the “accommodation is for women who have no right to be in the UK” and that the site provided a “safe and decent” space specifically designed for women. Charities supporting asylum-seeking disagree, arguing that detention is completely inappropriate for women.

“Our research has documented how the majority of women in immigration detention are survivors of rape and other forms of gender-based violence, including domestic violence, forced marriage, forced prostitution, or FGM [female genital mutilation],” Gemma Lousley, a policy and research coordinator at Women for Refugee Women, tells Huck. “Locking up women who have already survived trauma and violence inflicts immense harm and retraumatises them.”

Campaigners are concerned that the centre will only replicate the inhumane conditions at Yarl’s Wood. In 2014, Rashida Manjoo, UN special rapporteur on violence against women, planned to investigate and report on the conditions inside of Yarl’s Wood after a series of allegations of violence against women inside the detention centre. Even though she listened to stories and accusations about what happened inside of Yarl’s Wood, she was not allowed to inspect the facility.

The next year, in 2015, Channel 4 carried out an undercover investigation at Yarl’s Wood, revealing guards ignoring self harm and referring to women in racist terms. When the House of Commons gathered to discuss the mistreatment of detainees revealed in the documentary, Theresa May, Home Secretary at the time, refused to attend and was subsequently accused of allowing “state-sponsored abuse of women” when she extended the contract for Serco to run Yarl’s Wood.

“Women were being subjected to pat-down body searches by male officers and having their rooms searched by men,” Lousley says, recalling the experiences of women she has worked with over the years. “Additionally, women were routinely being watched in intimate situations by male staff. Women who were deemed to be at risk of suicide and placed on ‘constant supervision’, meaning that they were were being watched by male officers while they were showering, on the toilet, or getting undressed.”

A spokesperson for Mitie, the private company awarded a £166 million contract to run Derwentside, said: “The wellbeing of those in our care is our top priority. We have robust measures in place, created in line with government guidance and our own successful experience managing similar facilities, to ensure that services are delivered to the highest standards and ensure the safety and dignity of everyone at the site.”

Lousley rejects the claims that Derwentside will offer women safety. “However ‘good’ conditions in a detention centre are, being locked up is in itself extremely harmful,” she says. “Slightly improved conditions don’t negate the trauma and harm of detention.”

Each day, Tanoh would wake in Yarl’s Wood to a day filled with the fear of being deported back to the country she’d fled. “If you miss meals, you won’t have food,” she says, describing the conditions. “You have to eat what is put in front of you. At 9pm, they turn the lights off and you have to go to sleep. It’s so lonely.” She remembers one woman trying to take her life and another who had been held within Yarl’s Wood walls for two years, desperate to be released back into the community.

Tanoh stayed in Yarl’s Wood for a little over three months but was taken to the airport for deportation three times during that period. Guards would shake her awake early in the morning in order to complete the lengthy process prior to deportation. Three times, she was returned to Yarl’s Wood, with a different reason on each occasion. “They always brought me back,” she says.

After three months, Tanoh was released from detention, without any support from the Home Office. She went back to claiming asylum and was refused five times before being granted refugee status in 2018. She finally got the security and safety she needed all along.

She now spends her time campaigning for women like her; women who need compassion, not prison. “People claiming sanctuary don’t deserve detention,” Tanoh says, speaking about why she has joined those protesting at the new women’s detention centre. “By putting them in prison, we are going to be putting another burden on them. It breaks down families and destroys society.”

Detention isn’t cheap – it costs taxpayers millions of pounds. “It’s a scandal that our taxes are being used to lock up vulnerable women. There are lots of alternatives that are more humane and cheaper,” Julie Ward, the founder of the No to Hassockfield Campaign, tells Huck. Ward has attended each protest and has spoken to hundreds of asylum-seeking women in her years as a member of the European Parliament.

In July, Ward was invited to access the grounds of the new detention centre, one of the select few allowed beyond the high perimeter gates. “It’s a prison,” she says. “A nondescript, brick built, institutional building. It’s sickening.”

Lousley, Ward, Tanoh, and hundreds of others will continue to advocate for the rights of asylum-seekers and protest until Derwentside is shut down. “We are an army that wants to end detention,” Tanoh says. “We want to win. We are committed. We want to see a better life for women and for all human beings.”

Linkedin
RELATED ARTICLES
OTHER ARTICLES
A new edition of a seminal book brings together iconic images of the band onstage in their full glory and backstage in moments of unguarded camaraderie.
Finland-born photographer Sirkka-Liisa Konttinen looks back on her decades-long documentation of life in Northern England.
Whether it's partygate, the climate crisis or the spiralling cost of living, the fightback begins on the picket lines writes Tommy Vickerstaff
Proposals to introduce a minimum GCSE threshold for student loans will disproportionately affect those from marginalised backgrounds.
On the fifth anniversary of the tower fire, around 18,000 joined the walk to remember the 72 dead and to demand justice.
The singer-songwriter discusses her intimate new project – and the advice she’s picked up across a career as one of rock’s leading voices.