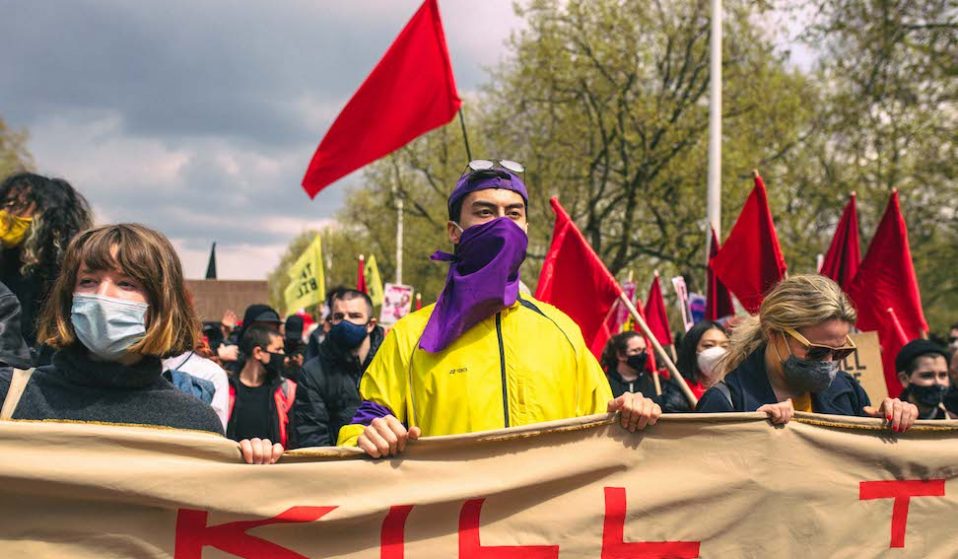 With the Bill returning to Parliament in early July, heavy-handed policing at nationwide protests and the G7 should fuel our fight against this legislation.

With the Bill returning to Parliament in early July, heavy-handed policing at nationwide protests and the G7 should fuel our fight against this authoritarian legislation.

Yesterday (June 24) the committee for the Police, Crime, Sentencing and Courts Bill sat for the final time. The controversial bill, known by many as ‘the policing bill’ was voted through second reading back in March with an overwhelming majority. The Bill has been the subject of intense nationwide protest since the Spring. It includes within it provisions that will fundamentally undermine and thwart the right to protest in this country as well as others that will target Gypsy, Roma and Traveller communities and sex workers.

The latest development in the passage of the Bill comes three months after heavy-handed policing descended into shocking levels of violence in Bristol. It was a rainy night in the city centre and an overwhelmingly young group of protestors were in place outside the central police station for many hours without incident. They switched between sitting in front of lines of riot police, who’d slowly been edging forward, and dancing round speaker systems that crackled in the showers, while chanting “kill the bill”.

After hours of calm, with little warning, the police attacked. Within seconds, the lines of riot police lurched forward, swinging their batons and using the edges of their shields to strike protesters in an illegal practice known as ‘cutting’. From a sidestreet officers with dogs appeared. From another, mounted officers rode into the crowd.

the aggression on the street is unrelenting pic.twitter.com/n5JZK3Y9gz

As the protestors were beaten back by the onslaught, people were lying on the floor barely conscious. A man with a bandage wrapped around his head, with blood staining his cheek and neck was hit to the floor by the police. A medic point had to be set up for protestors to receive medical attention.

The protest, which saw thousands march through the centre of Bristol, came just under a week after a demonstration outside the same police station saw a police van being set on fire and batons, pepper spray and dogs being used on demonstrators. Avon and Somerset police falsely claimed their officers had received broken bones and a punctured lung in a statement to the press which was then quietly walked back a few days later.

Rather than isolated incidents, these events are demonstrative of a wider trend in policing this spring. The violent break up of a vigil on Clapham common for a woman who we know now was abducted, raped and killed by a then-serving Met police officer, the brutal attacks on protestors in Bristol, the violent dispersal of peaceful protestors in Manchester and the stripping of a young female protestor in the city all point to one conclusion: the police, emboldened by an increasingly authoritarian right-wing government, are out of control.

That the surge in violence this spring, which comes off the back of violent crackdowns on Black Lives Matter protests in London last summer, has occurred in tandem with the passage of the policing bill is no coincidence.

The Bill is an all-out assault on the right to protest, brought in by a government that has consistently set out to undermine one of our most fundamental human rights. They say it is necessary to thwart disruption brought by protests like the Extinction Rebellion days of action which have brought London to a standstill. It is, they proffer, vital to grant the police these new powers to protect communities and business against the tyranny of protest.

it’s carnage here as group after group of riot police launch themselves into protestors. people here on their hands and knees being hit by batons. pic.twitter.com/D1U8Gno72M

The reality, however, is a dystopian future in which the police move around with impunity, shutting down any meaningful challenge to a government that has proven over and over again it simply is not willing to listen or bend its agenda. It’s a future we got a brief glimpse into during the G7 summit in Cornwall earlier this month.

Thousands of police officers from across the country flooded the rural county to protect world leaders as they met in Carbis Bay, just outside of St. Ives. The summit also saw protestors gather from inside and outside the county to try and pressure leaders into committing to make meaningful change on a number of issues including the sale of weapons, Palestine and the environment.

Before the summit had even begun police arrested a group of activists on spurious conspiracy charges having discovered a loudhailer and a smoke flare on one of them. Across the weekend, police officers then raided and arrested activists at the Animal Rebellion camp in the county, including the unaffiliated landowner who was taken to Exeter police station – a two-hour drive out of the county. A coach full of Kashmiri people who had travelled from Derby to attend a protest organised by a coalition of groups and trade unions on Saturday (June 12) was stopped by police and not allowed to continue.

Everywhere any form of dissent appeared, the police were also there. The new powers in the policing bill will make the highly securitised bubble around the G7 the norm.

Many were hoping that the worst elements of the Bill – which was delayed in its passing through parliament following ‘unexpected backlash’ in the shape of sustained protests in the days after the police violence on Clapham Common – would at least be partially neutralised as it made its way through committee stage. After two months of sittings in committee, there were a total of just 18 amendments made to the Bill, with one new clause added. All were proposed by Government ministers and passed without division. Not a single opposition amendment was made to the Bill which next passes to the report stage, currently tentatively scheduled for just one day on July 5.

Yet as the Government looks to squash our fundamental right to protest, the courts are reasserting it. Just this morning, as many began to try and dissect the limited impact committee stage amendments have had on the Bill, news emerged from the Supreme Court that a group of protestors who blocked access to the 2017 DSEI arms fair at the Excel centre in East London were successful in their appeal. The court held that their right to protest, as enshrined within the convention, meant their actions were lawful, despite causing ‘more than minimal disruption’.

What’s clear is that the law is increasingly on the side of protest. It is our inalienable right to gather, disrupt and demonstrate in an effort to effect change. What’s also clear is that without determined protest, the Government, and Parliament more widely, will push forward with the policing Bill, and strip away those rights.

This Saturday (June 26), as we approach the next stage of the Bill’s passage, a protest is once again planned for central London in an effort to Kill the Bill. It is beholden upon all of us who wish to fight for a better world to do everything that we can to stop this bill.

Linkedin
RELATED ARTICLES
OTHER ARTICLES
Hundreds gathered together to protest the policing bill by making as much of a racket as possible.
Photographer Yan Morvan revisits a radical moment in history, which saw the emergence of a fiercely-rebellious spirit among the UK‘s youth.
Ahead of the policing bill reaching its final stages in the Lords, protestors came together to rally against the legislation.
Photographer Alice Mann reflects on capturing the camaraderie and discipline it takes to succeed in a highly-competitive sport.
The musician, DJ and founder of Monika Enterprise reflects on a career defined by revolution and rule-breaking.
Those set to be impacted by the governments ’undemocratic’ bill explain why it risks silencing them.