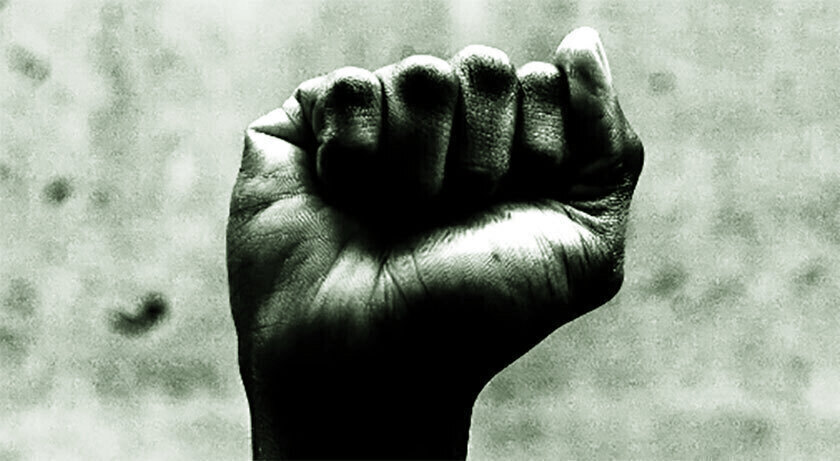 Writer Joshua Virasami unearths the legacy of Elma Francois and Amilcar Cabral, whose names, along with most of Black Marxist history, are too often cast aside.

For Black History Month, writer Joshua Virasami unearths the legacy of two revolutionary figures, Elma Francois and Amilcar Cabral, whose names, along with most of Black Marxist history, are too often cast aside.

When not taking J. Cole to task on a fresh Madlib instrumental, rapper Noname is diligently raising the political consciousness of the masses, one tweet at a time. Posting openly about her journey with Black radical histories, Noname has exposed tens of thousands to a rich litany of Black communist and Black anarchist ideas and histories. This exposure is a far cry from what most Black History Months feel like.

Black History Month, born of working-class struggle to racial capitalism, is too often a sanitised version of itself – the ‘first Black person’ to be hired in their respective industry or the Black inventor you never heard of, for example. There’s no doubt some of these people rocked the boat, but we rarely hear of people who capsized it, took it apart and built something new. Black History Month is unfinished business, and for it to complete its pilgrimage toward Black Liberation, it needs to be told to its fullest.

“No one is going to give you the education you need to overthrow them”, Black Panther activist Assata Shakur said, reflecting on mainstream schooling. “Nobody is going to teach you your true history, teach you your true heroes, if they know that that knowledge will help set you free”. In the account of Black history that we so desperately need, it’s the heroes of the radical, internationalist resistance to race-making who need full accounting for, people like Assata; people often left out.

Claudia Jones, CLR James, Leila Hassan-Howe, Kwame Ture – rarely will these names grace the pages of high-end lifestyle magazines tributes to Black history, or classroom walls. Black Marxists remain some of the most maligned activists by the state, and Black Marxist history one of the most under-taught histories in the mainstream discourse of Black history. If they are mentioned, then they are washed of their motivating ideas and beliefs – a tail with no sting.

When the word ‘Marxist’ is mentioned, white men with big beards and books capable of stopping bullets are summoned to the imagination. But Charlene Mitchell and Angela Davis, two Black women, are two of the most formidable Marxist Feminists to have uplifted and acted on the tradition. Black radical activists didn’t just learn from Marxism, they radically transformed it and made its attack against racial capitalism and hetero-patriarchy all the more cogent and strategic.

People like Elma Francois and Amilcar Cabral embody political organising rooted in this thinking. Their history is thoroughly intertwined with Black British history, and yet they are often forgotten.

Much that we know about Elma Francois is down to the meticulous research and writing of Rhoda Reddock, who published Elma Francois, the NWCSA and the Workers Struggle for Change in the Caribbean in 1988 with New Beacon Books – Britain’s most well-known Black bookshop in North London, which also houses the George Padmore Institute, an archive, library and research centre which is home to many materials related to the Caribbean, African and Asian communities in Britain. (It is well worth a visit).

E – Elma Francois, born in St Vincent, but became a trade union, anti-war & anti-colonial organiser in 1930s Trinidad. The British tried and failed to charge her with sedition following the 1937 popular uprising#BlackHistoryMatters#BlackFuturesMatter#BlackRevolutionariesMatter pic.twitter.com/Ginf0JQHkj

Francois, born in St Vincent in 1897, was one of the most important political organisers in Caribbean history. During the Great Depression, Francois migrated to Trinidad and joined the Trinidad Workingmen’s Association, where she was often found on the street speaking with the people, rallying them toward the organisation.

By 1935, Francois had co-founded the communist-oriented Negro Welfare Cultural and Social Association (NWCSA), which played a central role in the forming of four major trade unions. The work of the NWCSA sprawled to meet the fight for working classes, everywhere – they lobbied for lower milk prices in Trinidad, protected small Black businesses against unjust ordinances, led campaigns against Italy’s invasion of Ethiopia, and agitated against Caribbean working-classes participating in World War II.

Francois’ politics as a feminist and a Marxist meant that she would spend much of her time organising domestic servants and women. Francois empowered working-class Trinidadian women into political agency, encouraging them to transform the material condition of their lives. It was this approach which led to wide-scale labour strikes in 1937 and Francois being charged with inciting people to rebel against the state (sedition).

She was the first woman to be charged with such in Trinidadian history and represented herself at trial where, as Reddock describes, she ardently “described the relationship between the ruling classes of the world and the exploited workers of the colonies”. Francois died in 1944, but in her short life had left an indelible impression on the future of labour organising and revolutionary socialism in the Caribbean.

Much like Francois, Amilcar Cabral learned his political praxis from the communists who mentored him before, and believed deeply that the people, the labouring masses, were always the primary protagonist. “Hide nothing from the masses of our people. Tell no lies”, reads a directive from Cabral’s revolutionary party in Guinea Bissau to its cadre, “expose lies whenever they are told. Mask no difficulties, mistakes, failures. Claim no easy victories.” Cabral and Francois demonstrated a revolutionary zeal to be in service to the downtrodden, to uplift and empower them into a race and class consciousness they were once nurtured into themselves – this was what Black Marxism meant to them: action.

The organisation Cabral co-founded, Partido Africano da Independência da Guiné e Cabo Verde (PAIGC), achieved what many argue to be the most complete revolutionary defeat of a coloniser in Africa. Thanks to Cabral’s activism, not one, but two states were liberated from the clutches of Portugal – Guinea Bissau and Cape Verde. The independence of these two West African countries also provided a catalyst for ending the 48-year fascist dictatorship in Portugal (the longest in European history), and eventually to the end of the Portuguese empire (the first global empire in human history).

Cabral was born in 1924 in Guinea Bissau but spent his adolescent years in Cape Verde, around a buzzing political scene, where activists and thinkers hotly debated the future of the region. Cabral went on to study abroad, and of particular importance, spent seven years studying Agronomy – gaining a deep understanding of the land, and how peasants were forced to live, under the neglectful, parasitic rule of Portugal.

“Hide nothing from the masses of our people. Tell no lies. Expose lies whenever they are told. Mask no difficulties, mistakes, failures. Claim no easy victories”. – Amilcar Cabral pic.twitter.com/PJkUDAxYHy

In 1959, he co-founded PAIGC and set to work in building a movement toward national liberation. PAIGC and Cabral’s ideas were unique, in them was exemplified the ideal of ‘nothing about us, without us’, theirs was a fight less for the state, and more for society, where popular support was everything. Cadre of PAIGC would undergo extensive political education and military training, but also learned agricultural skills, so they could better serve local populations as they travelled.

With the assistance of Portugal, and the USA, Cabral was assassinated point-blank in 1972 in an ambush on his vehicle. Still, the movement went on to win the eleven-year war of independence and Cabral’s revolutionary writings on culture, race, imperialism and more continue to inspire movements across the world.

In the life and work of people like Francois and Cabral, we come into contact with a genealogy, a vital Black radical tradition of fighting back and winning. Their histories are not fixed in time and in their approach lie many lessons applicable in organising for power in today’s world, whether in agitating for industrial action, or in maintaining internationalist solidarity and alliances.

“History is ours, the people make history!” were the final words of Chile’s socialist leader Salvador Allende over the radio, moments before his death; the people’s history is the people’s salvation. Francois and Cabral lifted masses of people into their political agency, this is Black people’s history, and with it under our belt, nothing is insurmountable.

Linkedin
RELATED ARTICLES
OTHER ARTICLES
Jeffrey Henson Scales intimate portraits and protest images of the BPP and its leaders offer a rare insight into organisation at a time of societal upheaval.
The first-generation graffiti artist reflects on the tagging’s emergence as an art form and the players who pushed the medium forward.
Campaigners reflect on what the supreme court’s decision to allow buffer zones in NI means for the future of reproductive rights in the UK.
After fleeing the war in Ukraine, people are finding it impossible to secure affordable and decent housing in the UK.
Taking us through one of the most dynamic years in recent history, Laylah Amatullah Barrayn new photo book contains tender yet confrontational portraits.
A new podcast is opening up the conversation between trans women and trans amorous men in the hope of building coalitions.