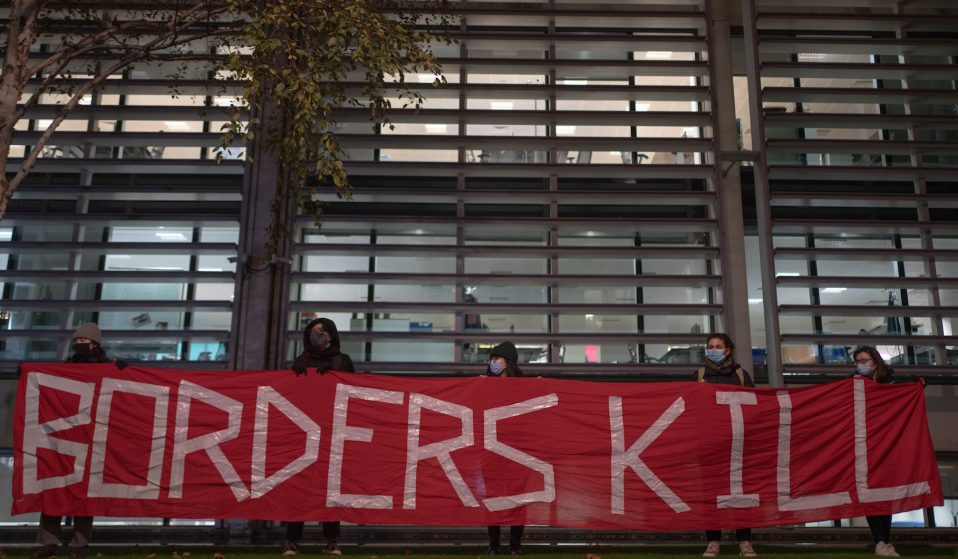 The Home Office claims to want to support people displaced by war, but is at the same time hosting a shadowy arms fair to help arms companies sell their deadly wares to stop people crossing borders.

As the Kremlin wages war on Ukraine, the UK government has continued to condemn Putin’s invasion in strong terms, with further sanctions set to be imposed on Russia and those close to the President. But behind this display of Ukrainian solidarity, something else is going on behind the scenes: the Home Office is promoting and supporting the very same arms companies that profit off war and deadly borders.

Every year, the Home Office hosts the Security and Policing arms fair. This year’s fair runs from 15 to 17 March in Farnborough – the Hampshire town that plays host to a military base as well as branches of the world’s richest arms companies. The fair is a chance for the world’s biggest and richest arms traders to rub shoulders with government officials, and make their business pitches for the latest deadly technologies.

This isn’t a secret; it’s right there on the event’s website, which boasts that delegates can “get access and exposure to senior decision makers and policy developers in government”. Dozens of government bodies are attending, including Border Force, which will host an event to judge pitches made by three different companies. There’s even a drinks reception, providing delegates a “unique opportunity to network with representatives of the Home Office”.

A government spokesperson said: “The UK takes its export control responsibilities very seriously and has not granted export licences to Russia for controlled military items since we imposed an arms embargo in July 2014.

“Following the illegal invasion of Ukraine, we suspended approval of new export licences for dual-use items to Russia with immediate effect. All extant licences for items which are not consistent with sanctions measures will be revoked and military exports to Russia remain prohibited.”

Maybe none of this should come as a surprise – but the timing of this year’s fair feels particularly distasteful. Some of the delegates who’ll be enjoying glasses of prosecco with Home Office and other government officials will be toasting to higher profits – their companies’ share prices jumped on 24 February, when Russian bombs started to rain down on Ukraine. This is, of course, no coincidence.

There are those included on the exhibitors list who have been selling to Russia. Their exports make up some of the £103 million worth of military equipment exported from the UK to Russia since 2008.

As bombs began to rain down on Ukraine last month and millions fled, our government has reached for a familiar formula: promise the world, deliver a few dozen visas for the lucky few and a cold shoulder for the rest. This time, they’ve even proudly touted their visa scheme – which to date has helped just 5,500 people – as “the first visa scheme in the world to launch” since the invasion began. There’s a good reason that it’s the first visa scheme to launch: everywhere else in Europe has waived visas and given sanctuary to people fleeing indiscriminate shelling of their homes. The UK government has refused to do the same.

Their so-called ‘U-turn’, which allows some Ukrainians to skip one of countless steps in the bureaucratic nightmare of applying for a visa, does not address the scale of the problem. It only applies to people joining family here, and with valid Ukrainian passports. People forced to flee in the dead of night without their passports, or people from Roma communities who do not have documents, are left out in the cold. The tiny concessions the Home Office have made until now are far from enough – there is so much more the government can and should do, not just for Ukrainians but for people from Sudan, Eritrea, Iran and other countries in the Global South, who also have the right to seek protection, but have to risk their lives to do so.

We’ve seen the same formula play out with Afghanistan, a conflict the UK played a direct role in. When crisis hit, we saw promises of ‘welcome’ and ‘compassion’, accompanied by videos of Priti Patel helping new arrivals at the airport. The reality is that months later, thousands of families who were evacuated when the Taliban took over are still confined to cramped rooms in temporary accommodation.

On top of this, having promised to resettle more than 5,000 people fleeing Afghanistan in the first year, the Home Office is now claiming its quota is already met – by people who were evacuated here last year, and are already in the UK. Meanwhile, LGBTQ+ people, climate activists, members of ethnic minorities and others remain in hiding, in fear for their lives in Afghanistan and with no prospect of a functioning resettlement scheme any time soon.

The invasion pf Ukraine, and the accompanying movement of people, comes just months after 27 people died at the UK border – possibly within British waters – attempting to reach a new life here. They lost their lives because they didn’t have the right piece of paper in their passports, and because the only way to get it was by crossing the freezing English Channel in an overloaded boat, in the dead of night. Hard borders like ours kill – and Priti Patel knows it. Back in 2019, she and other MPs concluded in a report that “in the absence of… accessible legal routes for seeking asylum in the UK, those with a claim are left with little choice but to make dangerous journeys by land and sea.”

Since becoming Home Secretary, though, it seems that restricting legal routes to claim asylum here has been priority number one. Now, the government is preparing to push through the final stages of its draconian Borders Bill, which would see people pushed into mass camps, here or overseas, when they come here to seek safety. Refugees would never get to access full rights, just because they travelled here by boat or lorry, instead of waiting years on end in refugee camps in hopes of one day, maybe, being resettled.

Hardening borders and removing safe routes to asylum doesn’t stop people needing to move – it just makes moving across borders ever more deadly. There are clear winners from this: the arms companies that sell the tracking technology, the heartbeat monitors, the barbed wire fencing and the rifle sights that hard borders rely on. But there’s another winner: politically flailing governments.

This government knows that migrants will always provide a handy political distraction. It also knows that there’s serious money to be made from touting UK-made military-grade technology to police the world’s borders.

This Home Office-run arms fair is proof, if any were needed, that this government is choosing to make a killing on borders, rather than introducing the safe routes that would work. A world in which nobody has to risk their life to move across a border is within reach, and the solutions already exist. But we need to fight for it, by standing up to arms fairs, by pushing MPs to scrap the Borders Bill, and by making the case for a better world where nobody is forced to flee by violence, and nobody suffers violence on the way to safety.

Mary Atkinson is the Joint Council for the Welfare of Immigrants’ campaign officer.

Linkedin
RELATED ARTICLES
OTHER ARTICLES
With skyrocketing rents, packed out viewings, bidding wars and more, renting in London has never been harder.
Financial turmoil is pushing people who work in the sex industry into more dangerous and desperate situations as a means of survival.
In his 2008 series, the photographer pictured himself as Angela Davis, Martin Luther King Jr., Malcolm X, and other prominent figures.
By turning a real-life crisis into daytime television fodder, TV bosses have once again shown themselves to be completely out of touch with audiences.
A 37-year-old woman shares how her abortion led her to become a clinic worker, and the abuse she’s received in that role.
Photographer David Corio’s archive offers a glimpse inside a revolutionary era of music and nightlife.