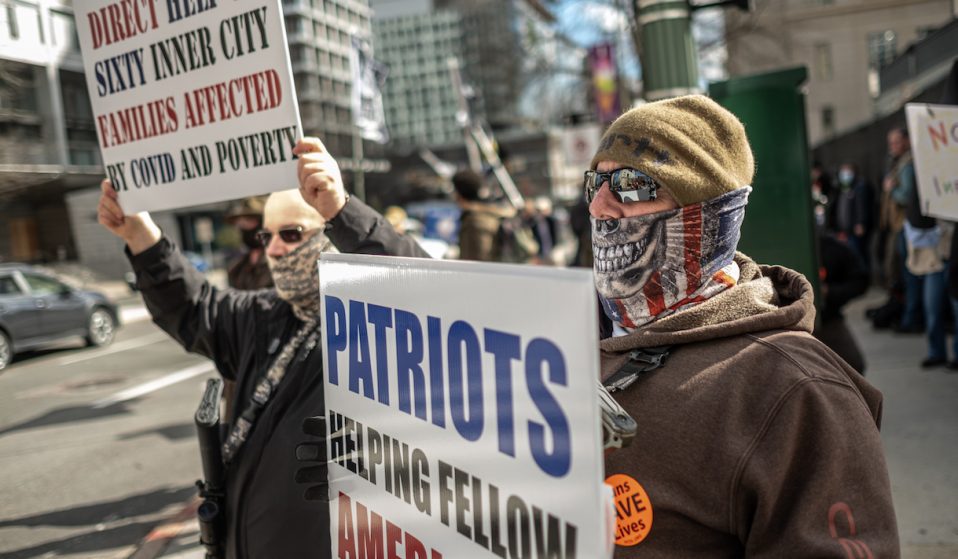 Bolstered by the Capitol riots, this week, pro-gun activists, Boogaloo Boys, and Trump supporters gathered in their thousands for Lobby Day in Virginia.

It’s been two weeks since the storming of the US Capitol by Donald Trump supporters. Images of rioters dressed in bulletproof vests, clasping zip tie handcuffs, traversing the seats and aisles of power at the heart of the US government stunned the world as rumours and worry of treason swirled around Washington DC.

Talk of a second armed insurrection, of hostile takeovers of Government buildings across the United States and attempts to  thwart the peaceful transfer of power, have set security forces on edge. On Monday, the sudden appearance of smoke over the US Capitol saw rehearsals for the inauguration of president-elect Joe Biden evacuated, as sirens rang out over the hill.

The source of the smoke was later found to be a fire in a homeless encampment under a nearby highway. Rehearsal could continue, but the panic laid bare the tension boiling underneath the surface as America, and the world, waited with bated breath for what would unfold next.

It was against this backdrop that the ‘Rolling 4 the 2A’ demonstration took place. Organised by the Virginia Civil Defense League, the annual pro-gun rights protest sees thousands descend on Richmond, Virginia in a caravan of vehicles that drives up to the state Capitol building. Last year saw some 25,000 people attend, with only one arrest – for, somewhat ironically, a felony count of wearing a mask in public.

Photographer Wil Sands went along to the demo and noted that it was significantly more muted this year. “It was really hard to get a feel for how many people were there because they almost entirely stayed in their cars,” he told Huck. “I’ve seen estimates of 5,000 and 25,000, I would say it was closer to 5,000, at least vehicles. It was significantly less open participation compared to last year.”

The attack on the Capitol hung heavy in the air with most of the conversations had between those on the demo and passers-by coloured by the insurrection. “If there was support [for the storming] the demonstrators would go harder on gun rights, if there was rejection, they’d be quick to distance themselves,” says Sands. 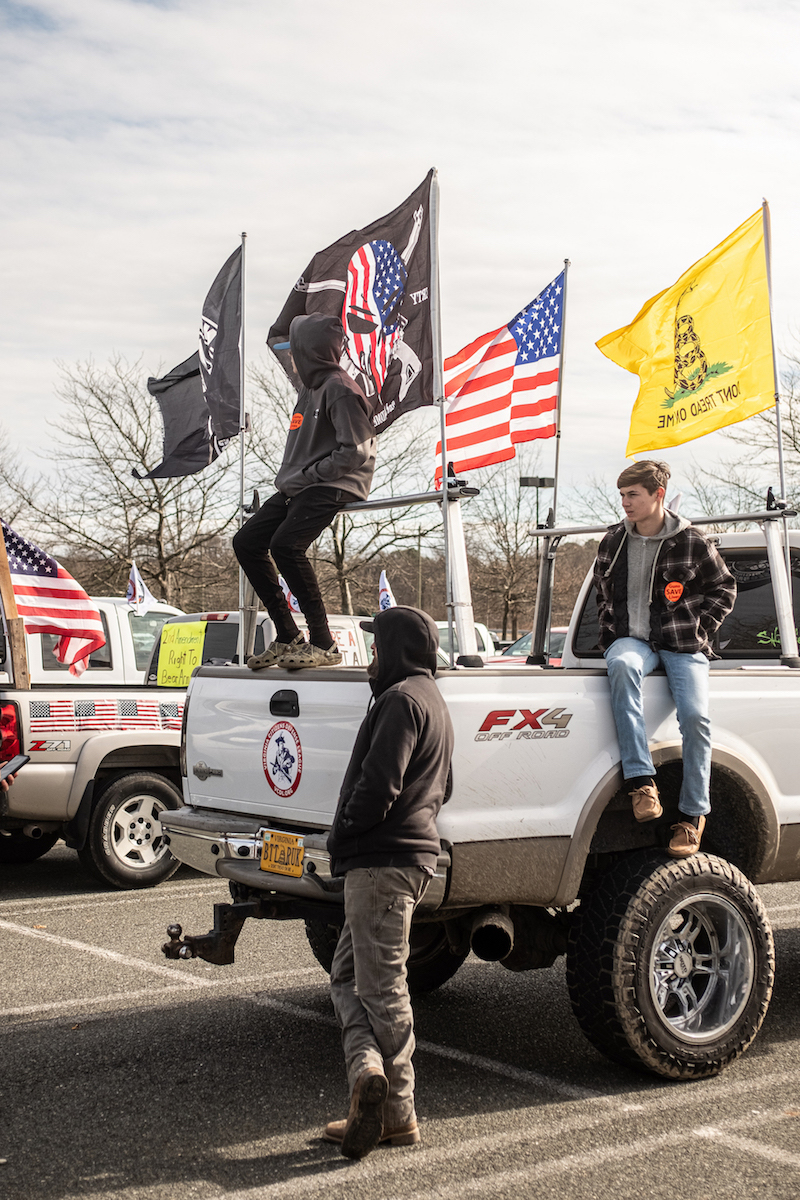 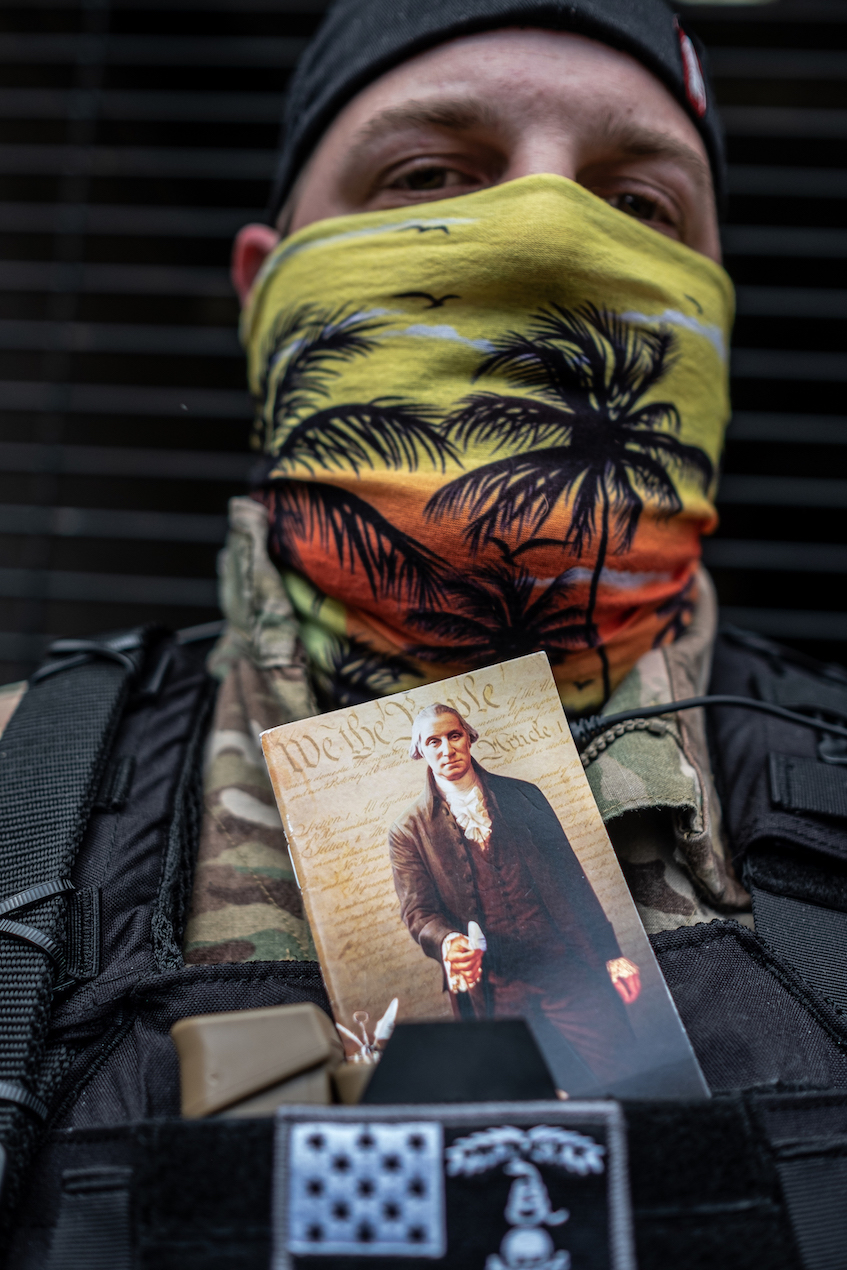 Portrait of a Boogaloo Boy. He was unwilling to give his name, “for security purposes”.

The Virginia Civil defence league condemned the attack on the Capitol, and have tried to distance themselves from Trump and MAGA. But, Sands told Huck, this was disingenuous at best. “Two weeks before the leader [of VCDL] had been attending and speaking at ‘Stop the Steal’ demos.”

There were people in attendance convinced that the attack on the Capitol, in which notable members of various far-right and conspiracy groups were pictured, was a “deep fake” and that the crowds that day had been infiltrated by “Antifa and anarchists”.

Speaking in the parking lot of Green Top Hunting and Fishing in Ashland, Virginia, the meeting place for the Rolling for 2A Caravan, William “Wild Bill”, one of the attendees, said: “I’m standing up for my 2nd Amendment rights! If we don’t no one will. And I’ll tell you something… that business at the Capitol was all staged. I don’t believe any of it. It wasn’t Trump folks causing all that mess. Just like Sandy Hook. No one talks about what happened there anymore… it’s like it just disappeared.” 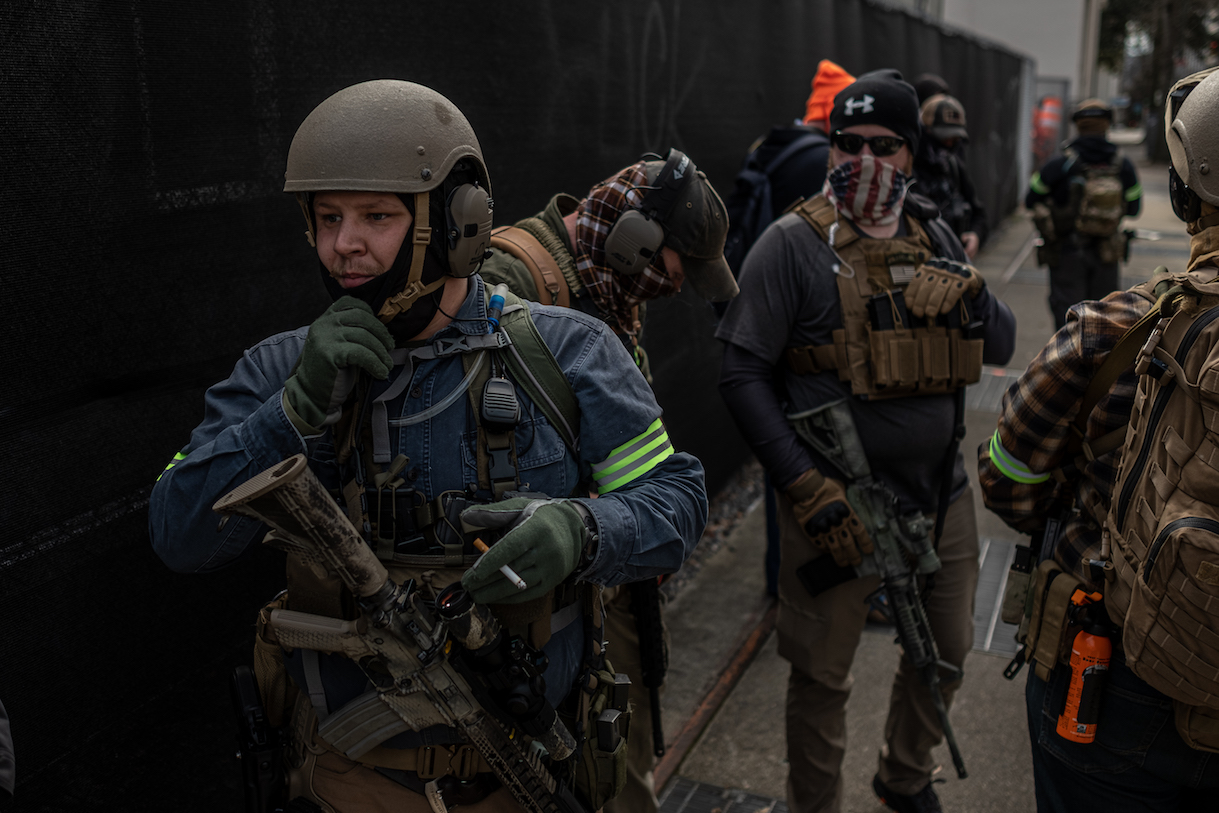 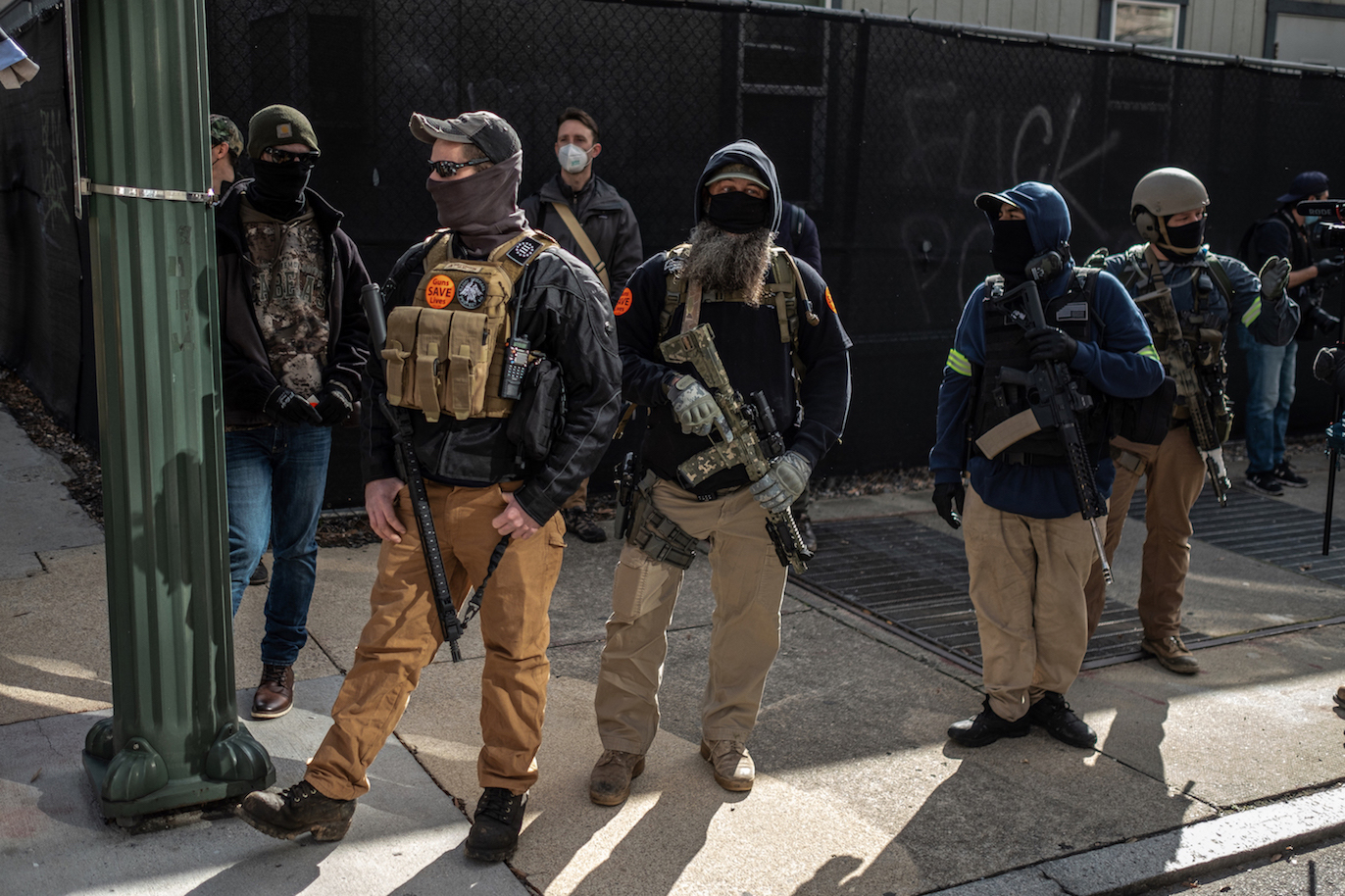 The demonstration in Richmond came almost a month after the Christmas day suicide bombing in Nashville Tennessee by far-right conspiracy theorist Anthony Quinn Warner. It’s this threat that Sands considers more prevalent than a repeat of an attack on the Capitol that many are concerned about.

“My feeling is you can never rule out some kind of lone-wolf craziness, but the parts of the right that have been spearheading this are currently going underground. Looking at their chats [on Telegram], there’s lots of vitriol but the material plans have decreased. The hardcore folk are realising they could be arrested or killed.”

“I wouldn’t be surprised if over the next couple of weeks the events will be muted,” Sand continues. “I do think there’s a real possibility of bombings or pipe bombs or threatened assassination attempts or planning what they were planning to do with governor Whitman in Michigan. What happened on the Capitol only filled their sails, I think they’ve become hardened and more security conscious.”

This week’s demonstration in Richmond saw the appearance of the Boogaloo boys – a loose collection of the extreme-right militia. Their de facto spokesperson Mike Dunn, surrounded by cameras and journalists said: “These are the best recruiting drives ever. You guys. You guys in the media are our recruitment. Since the 6th [of January, the storming of the Capitol] we’ve had more than 15,000 emails and contacts through the social media accounts we still have”.

As the world holds its breath today waiting to see if Trump comes through on his promise of a peaceful transfer of power one thing is clear: this isn’t the end. The assault on the Capitol was just the beginning of yet another fractious period in the history of the United States of America. 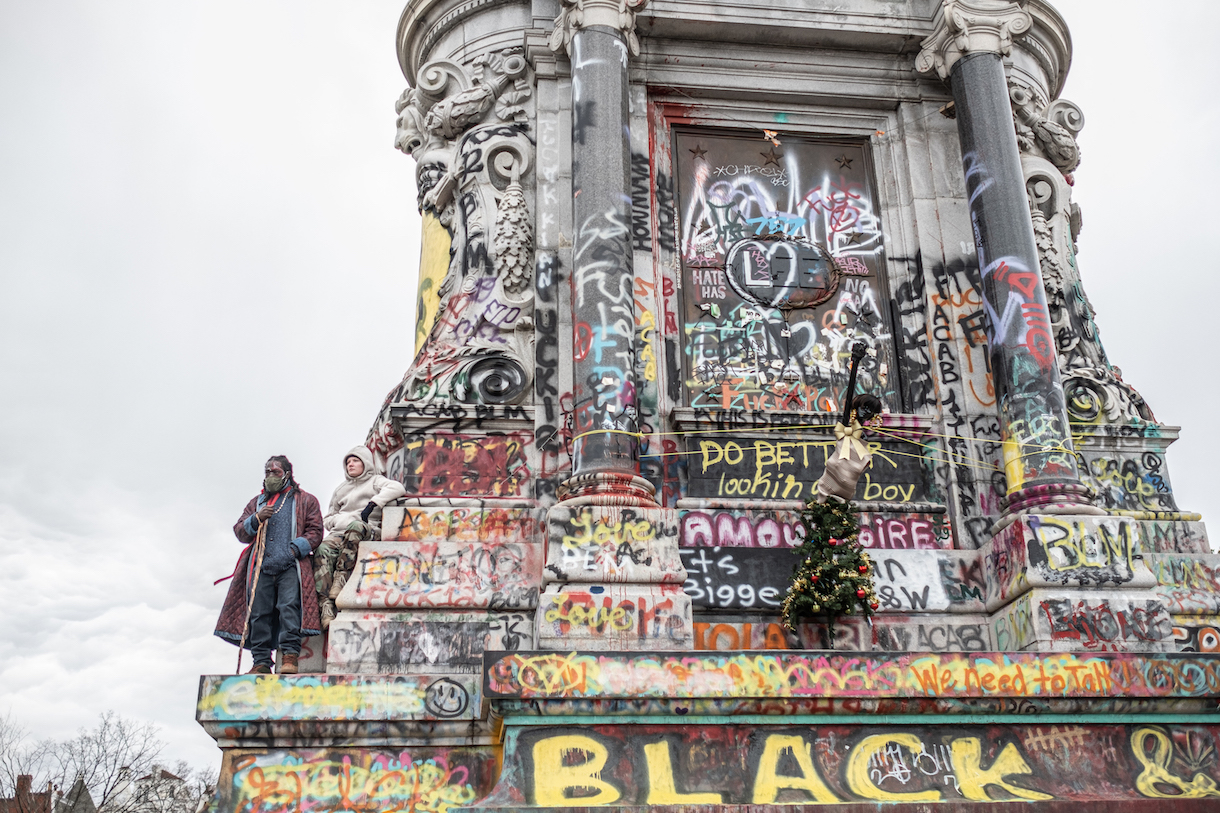 After gun rights activists from the far right threatened to march on Marcus David Peters square, formerly the Lee Memorial, anti-racist activists and antifascists gathered to defend the space. 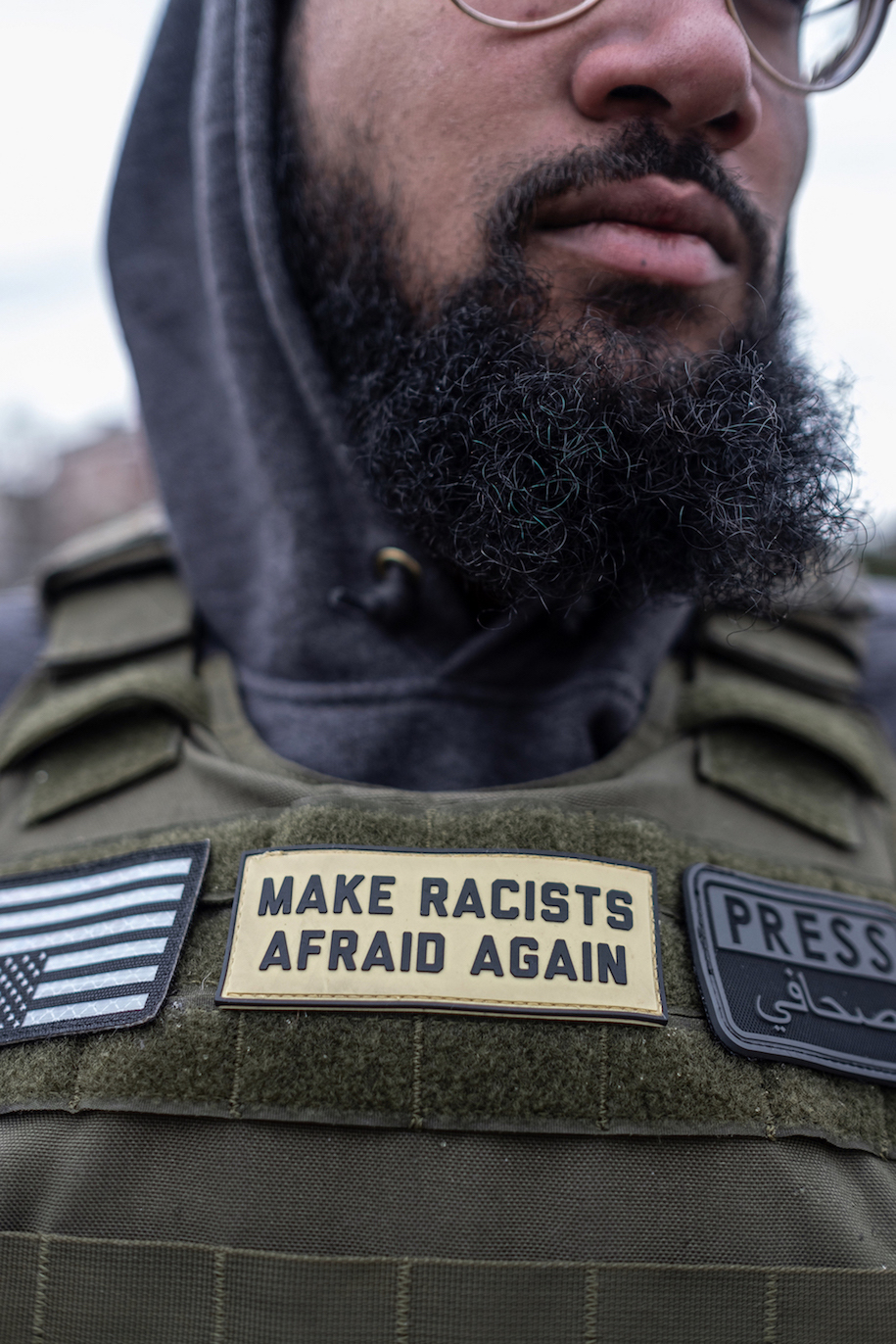 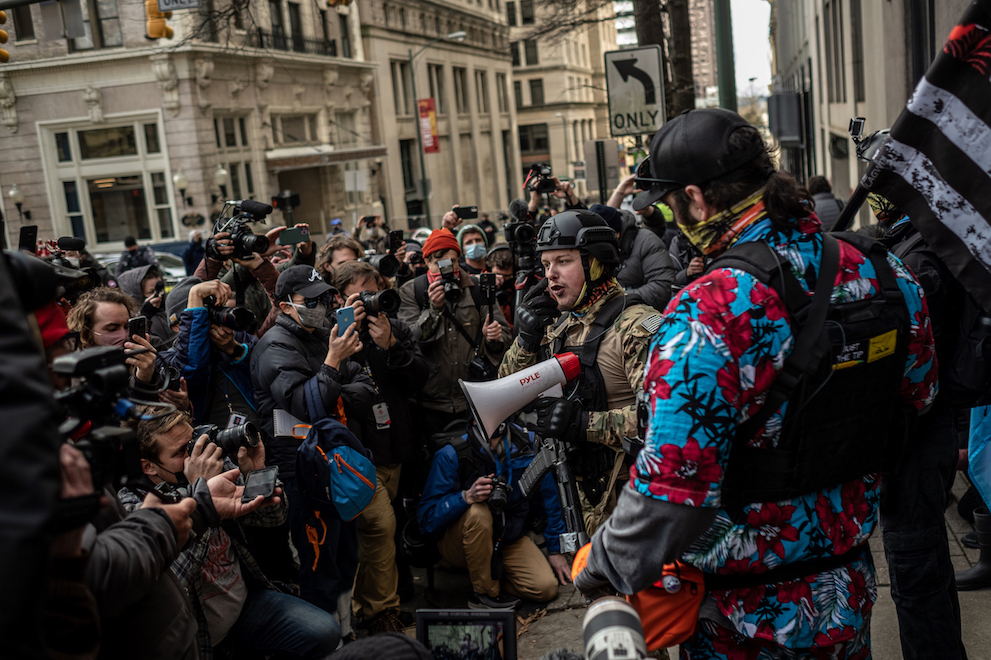 Mike Dunn the de-facto face of the Boogaloo Boys movement rants to the press about perceived threats to the 2nd Amendment. 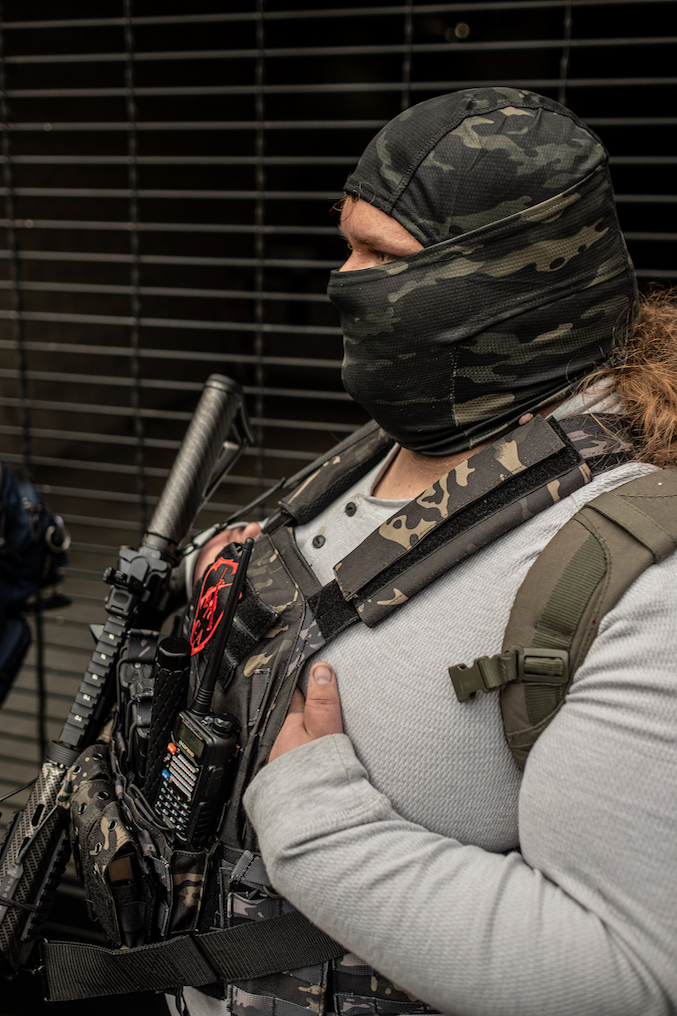 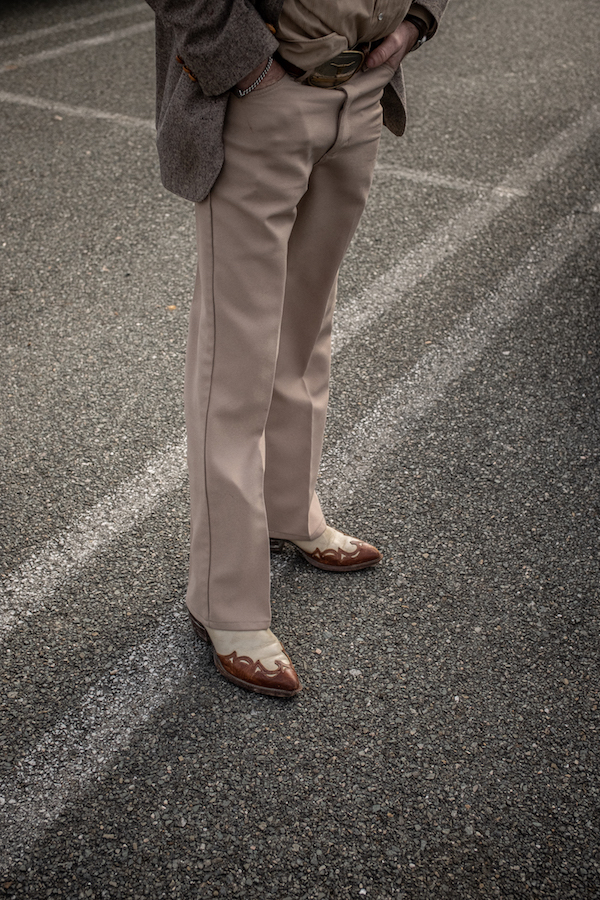 Linkedin
RELATED ARTICLES
OTHER ARTICLES
Ahead of the release of their first collaborative album, the producer and rapper talk psychedelics and the state of UK hip hop.
Following the announcement of an 80% hike in the energy price cap from 1st October, crowds gathered outside the offices of energy regulator Ofgem to protest and declare their intention to undertake a payment strike.
Cindy Campbell recounts how her brother ushered in a new era of musical culture at a party she held in the Bronx in ‘70s.
With skyrocketing rents, packed out viewings, bidding wars and more, renting in London has never been harder.
By turning a real-life crisis into daytime television fodder, TV bosses have once again shown themselves to be completely out of touch with audiences.
Birdy Chu reflects on documenting the historic moment in which the territory was formally passed back from the UK to China.