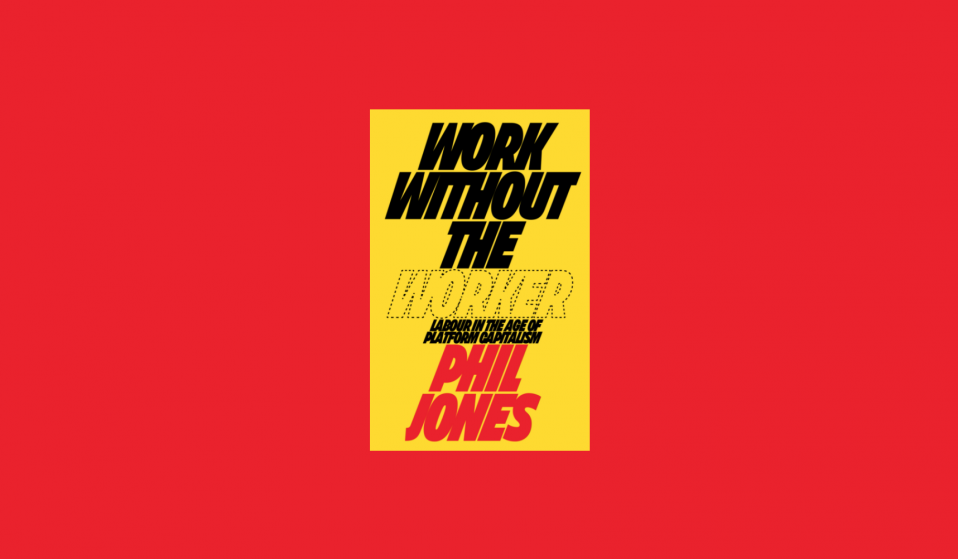 Writer and researcher Amelia Horgan speaks to Phil Jones about his new book, which considers how a precarious form of labour carried out online is shaping the future of work and what it says about the state of global capitalism.

Writer and researcher Amelia Horgan speaks to Phil Jones about his new book, which considers how microwork – a precarious, murky form of labour carried out by millions in order to make our digital lives possible – is shaping the future of work and what it says about the state of global capitalism.

In his new book, Work Without the Worker (Verso Books) researcher Phil Jones exposes the digital exploitation behind automation. Around the world and particularly in the Global South, many eke out a living through ‘microwork’: tiny tasks that power existing and future technologies, from Google’s search engine to self-driving vehicles and facial-recognition software. This work is done remotely, from homes, internet cafes, even refugee camps and prisons.

Workers tend to be those excluded or expelled from standard wage labour – the incarcerated, the long-term sick, and those on the sharpest edges of global inequalities and conflict. Platforms like Clickworker and Amazon’s Mechanical Turk host the tasks and act as intermediaries between contractors – including tech giants like Amazon, Google, Facebook, and Microsoft – and workers, taking a cut from every transaction.

The work is precarious and low paid, often as little as a few cents for ten minutes of work. It comes with negligible legal protections. Microworkers often work for upwards of 20 to 30 contractors per day, engaging in disparate tasks from tagging images to urban areas to posting images of their body parts. The tasks themselves are often disconnected from whatever the contractors are trying to achieve overall, and workers often have no idea about what they’re contributing to. This might mean refugees working on facial-recognition software deployed by ICE or on military technologies used in conflicts they have fled.

Huck spoke to Jones about this new hidden digital abode of production and what it means for the future of work.

Let’s start with the basics. What are the new technologies that form the background to the kind of work you talk about in Work Without the Worker?

The kind of artificial intelligence that has become dominant over the last decade is machine learning, which is a method, a way of achieving intelligent technologies. Machine learning relies on being fed lots of specific data by people. One of the promises that is continually made by Silicon Valley is that in our automated future, we’re going to get rid of monotonous low-skill work and no-one will need to do that anymore. But in actuality, an autonomous vehicle, for example, can’t learn to drive simply by absorbing lots of unprocessed data about traffic loads and urban areas. It relies on a lot of workers to process and label that data. Or a facial recognition algorithm, for instance, relies on lots of face tagging tasks: so workers basically clicking on images of faces with labels like “nose” or “eyes” or telling the technology the specific emotions that are being portrayed on the face. Another example would be Google search, which relies on a vast army of workers to rank search results.

The promise that work is somehow going to magically disappear is nonsense. Until we can create a general form of artificial intelligence, which can generalise intelligence across multiple contexts – and there’s no evidence that that will ever actually happen – then we’re going to need workers.

How does microwork differ from other forms of work?

In some respects, microwork is really a continuation of much longer trends in capitalism – it continues a globalised outsourcing model that has been central since the 1970s. Most of the work is done in the Global South and it looks a lot like other kinds of precarious and informal work in those countries. The sociologist, Jan Breman, has lots of really interesting things to say about informal economies in the South. He writes about what he calls “wage hunters and gatherers” in cities in like Mumbai, and Kinshasa, who, over the course of a day will do a disorienting number of jobs: hawking, petty goods, selling tissues on trains, doing bits of litter picking, just generally trying to find bits of income to survive. And more often than not, their days are spent hunting for tasks rather than actually doing paid work. In my book, I’m arguing that microwork is a digital adjunct to this form of work.

The conditions are bad due to there being an oversupply of workers, not only in the countries where these platforms tend to operate, but also on the platforms themselves. The platforms will invite more workers to be on there than there are tasks available. So, there’s this continued downward pressure on wages and conditions, because there’s always another worker who can take your place.

“In the hour it takes Jeff Bezos to make $13 million, a refugee earns mere cents teaching his algorithms to spot a car.” https://t.co/5CexFwFsCL

One problem you point to is that there are significant barriers to organising workers in these atomised workplaces in which workers never encounter each other and are spatially dispersed. Despite this, you argue about the potential for actions by such workers. Can you talk more about the barriers they face to organising and the tactics available to them?

Microworkers find themselves in an odd position where they have a lot of potential power but it is very difficult to realise that power. A general strike across multiple microwork platforms could cause chaos: social-media feeds being suddenly swamped with traumatic and pornographic content; Google’s search functions no longer operating properly; influencers complaining because their videos were not being ranked properly.

The recent outages of social media platforms – Facebook, WhatsApp, Instagram – revealed something that we already suspected, which is just how dependent many of us are on social media for our communication and our sense of wellbeing (often a highly dubious and ugly form of  wellbeing). It showed that microworkers, in particular, and content moderators in countries like the Philippines, have the potential to cause all kinds of problems to these sites. But it’s really hard to organise the kind of action that would have this kind of impact because workers work remotely and they’re often existing in contexts where labour organisation is very difficult or illegal: refugee camps, prisons. Then, of course, there is the nature of the platforms themselves, which make it very difficult for microworkers to organise because they’re set up to privilege the interests of contractors. There’s basically no way for workers to communicate which means they rely on external forums, mainly Reddit threads.

One strategy that I look at in the book is data sabotage, wherein workers from a number of platforms would agree to sabotage tasks at the same time, and for an extended period, like the Luddites in the 19th century. On online platforms, this wouldn’t involve smashing machines, but rather preventing the circulation of data that powers big tech companies. This strategy is quite problematic because it could lead to some workers being kicked off the platforms, or receiving low ratings for work (which ultimately would lead to them being kicked off the platforms). This is a serious disincentive to collective action.

Your book gives such a clear sense of multiple crises of work: a diminished availability of full-time, secure and fulfilling work; the pandemic’s ‘great resignations’ and popular reassessments of the place of work in human life; workers being exposed to significant risk and the blurring of home and work life.  How do you see these trends developing in relation to online platform work?

We’ve seen that microwork has grown over the pandemic, partly because microwork can be done from home. If you have a long-term illness or disability, you don’t have to go into a warehouse or a factory or an office. I’d also wager that microwork has grown because many have lost their jobs throughout the pandemic. Microwork was also the harbinger of the changes we saw over the pandemic. The level of surveillance, for instance, that many home workers have experienced, is a central feature of microwork. The increasing role of data extraction as well, which many of us have been exposed to by using Zoom and Teams – that’s always been central to microwork.

Microwork might be seen as an experimental space, where new kinds of expropriation and capitalist management were being trialled long before the pandemic. The pandemic, then, operated as almost a bit of a shock doctrine for big tech, bringing in these methods and techniques, which have been tested out on work platforms and the gig economy, on a far broader scale. It does seem like a lot of the negative features of these kinds of platforms are now starting to be generalised to more workplaces.

Where do consumers fit into this? It seems like we’re all producing data for free for companies all the time. What does this mean for power in the new digital economy and does it point to the need to democratise digital infrastructure?

Democratising digital infrastructure is a really interesting idea. The fact that platforms are only profitable due to personal data I would say shows that in reality, we, as users of the sites, are key stakeholders in these businesses. But we have no say in how the sites operate, how they turn profits, how they treat their workers. Our social lives are at the whims of these eccentric billionaires. The pandemic consolidated just how central to our social existence these platforms are because we were using them more and more because we couldn’t go outside. And this consolidation and integration into our lives has been to such a degree that I would say there’s no longer a good argument for not treating them as public utilities.

Is microwork the future of work? How can we fight for a better and more secure future?

I think the growth of microwork is inevitable as things stand unless big tech is brought to heel. So in this sense, it is the future of work. But only one future.

I think other futures are possible. The one I want to see is one where we work less. Where work is distributed more evenly, where workers have more say over the kinds of jobs they do and the purpose of their work. This will involve workers organising through institutions like unions, and workers movements will need to intersect with other kinds of movements, in particular the climate movement, which in the last five years has gone from strength to strength.

Phil Jones’s Work Without the Worker is out now on Verso Books.

Amelia Horgan’s Lost in Work is out now on Pluto Press.

Linkedin
RELATED ARTICLES
OTHER ARTICLES
Over the weekend, London locals came together to resist a pre-planned police raid targeting delivery drivers.
Following the release of his newly republished 1991 book, Redheads, the American photographer reflects on his celebration of ginger people and their magnetic power.
Following the success of her debut novel, the Tottenham native is restating her commitment to the place that made her.
In the latest OFFF Dispatch, the enigmatic designer dives into his process, connecting the dots between his unique and varied creative output.
After news broke last week around an expected reversal of the 1973 landmark law that made abortion legal in the US, protestors gathered in the UK in support of American women.
The author discusses her blistering new novel about history, revolution and queer love.