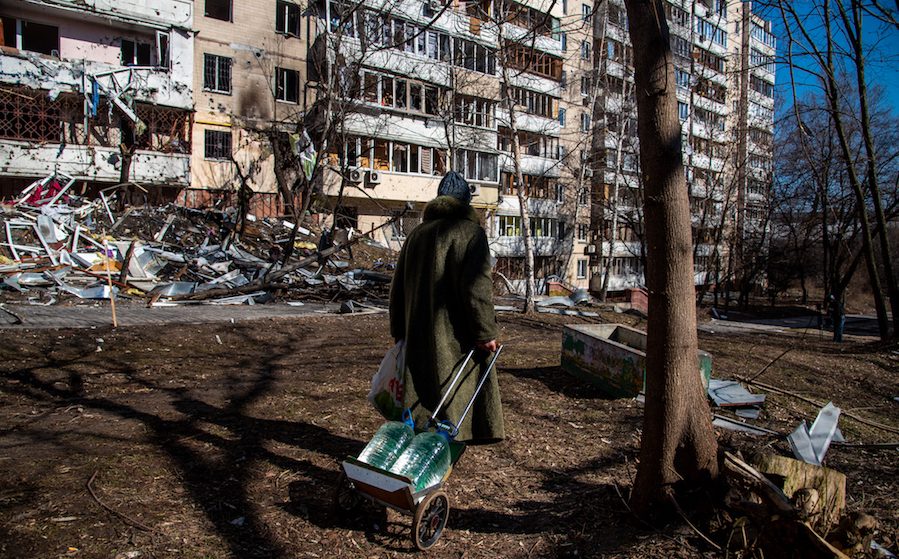 With its new resettlement scheme, the government is outsourcing the responsibility for a humanitarian crisis.

With its new resettlement scheme, the government is outsourcing the responsibility for a humanitarian crisis and failing to account for the complex needs of people fleeing war.

Tomorrow (18 March), the government will open the first phase of the ‘Homes for Ukraine’ scheme, whereby Ukrainians with sponsors can apply for a visa to come to the UK, following which they will be able to seek work and to apply for benefits.

Like many who have campaigned for safe passage for years, I was taken aback. As this scheme is formulated, tens of thousands of asylum seekers already in the UK, facing delays in the resolution of their asylum case, are not allowed to work and are reliant upon Home Office support equivalent to £5.66 per day. As our government releases statements that describe the UK as “one of the most generous nations in the world”, a Nationality and Borders Bill stands before parliament that, amongst other points, will render a criminal offence any attempt to “facilitate the entry of asylum seekers” (it was only after public outcry that an amendment was included that would exempt rescuers like the RNLI).

In stark contrast, there is no cap on the number of refugees that may be resettled through Homes for Ukraine. Nonetheless, this scheme – though a step in the right direction – is more suited to the government making a show of responding to the general public’s sympathy than it is to constitute the next chapter in the UK’s “long and proud history of supporting the most vulnerable during their darkest hours”.

Without even entering into a discussion on the extent to which our history on immigration can really be thus characterised, the scheme is simply not fit for purpose to meet the needs of the most vulnerable.

Firstly, the Homes for Ukraine scheme relies upon Ukrainians making contact with sponsors who then commit to housing them for a minimum of six months. This will likely favour those who already have contacts in the UK or speak English. A number of platforms and apps created to connect potential sponsors invite Ukrainians to share pictures of themselves and their families, playing into all kinds of subconscious bias.

As foster care and adoption studies have shown, the most vulnerable or those with specific needs are often the last to be housed. Those fleeing Ukraine who have disabilities or complex medical needs will be less likely to find a sponsor. Since visas are contingent on a confirmed sponsor, they will be left behind.

Significantly, the scheme excludes anyone who is not a Ukrainian national, or the immediate family member of a Ukrainian national. As such, Yemenis or Syrians fleeing Ukraine will not be eligible for the Homes for Ukraine scheme despite widespread reports of racial profiling and discrimination on the border with neighbouring countries.

It is also doubtful that the scheme will guarantee the level of safeguarding that is required when dealing with vulnerable populations. Lord Harrington, appointed Minister for Refugees last week, failed to confirm that councils will check accommodation that Ukrainians will be housed in. The government is yet to comment on what will happen to those who are resettled only to have their relationship with their sponsor break down. Worse yet, it is not impossible to envisage a scenario in which certain members of society take advantage of refugees who have no network in the UK, do not speak English, and are unsure about what will happen to them if they leave their sponsor’s home.

Essentially, the scheme – by design or by accident – outsources the response to citizens. The widescale support from the general public is to be applauded and is much of what gives me hope in dark days like this. But no expert in humanitarian response or refugee resettlement would argue that this scheme will meet the needs of the most vulnerable.

If the UK government is in the business of humanitarian response, then it should determine an annual number of refugees that it can resettle, and commit to it for the next few years. Community volunteers can then be integrated into the scheme, with housing benefits making up for any shortfall, and refugees expressing their interest to live alone or in a sponsor’s home upon arrival in the UK. The government would itself process resettlement claims such that the most vulnerable arrive in the UK first.

An alternative would be to invest in the resettlement infrastructure that already exists, instead of creating our own bespoke scheme. The United Nations High Commissioner for Refugees (UNHCR) puts forward the most vulnerable refugees worldwide for resettlement – of whom only one per cent are successful due to lack of demand from host countries.

4. Many refugees arriving from Ukraine and elsewhere have multiple and complex needs, including the effects of extreme trauma. They need professional help covering the whole spectrum: housing, legal, employment, access to welfare and services, psychotherapy etc.

Resettling refugees through UNHCR would have the added benefit of meeting the needs of the most vulnerable refugees worldwide – irrelevant of the news cycle that will inevitably forget crises long before those caught in its crossfires find a durable solution. Humanitarians commit to being impartial – to meeting the needs of the furthest behind first – and engaging in global resettlement schemes would also see Somalis in Kenya, Afghans in Pakistan, Syrians in Turkey resettled, giving credence to the government’s claims of being driven by supporting the most vulnerable.

The cynic in me wonders whether this scheme is a Machiavellian plot devised by those who would rather not welcome 200,000 refugees but feel obliged to respond to public pressure. Pledging the resettlement of 200,000 Ukrainians to UNHCR would ensure 200,000 refugees landing on UK soil – or were we to fall short of our target, a national scandal. By making the success of the Homes for Ukraine scheme contingent on the capacity of the British public, the UK government can argue that when significantly fewer refugees come, it was due to a lack of interest.

But this misses the point entirely. The onus to respond to a humanitarian crisis should never be on the public. Each action in the immediate aftermath of a crisis has a myriad of potential unintended consequences, and we humanitarian professionals accept that it is our life’s work to mitigate these. As we know all too well, the road to hell is paved with good intentions. There is certainly space for community engagement in resettlement schemes – and all the rewards both hosts and those fleeing conflict have to reap from that – but only in the context of a structured programme that ensures training for sponsors, robust safeguarding, and a safety net for the refugees involved.

What this entire debacle shows is that refugee resettlement is not a tap that should be turned on and off. Resettlement is complex, requiring a community of psychologists, social workers, lawyers, career mentors and language teachers. Many needs can be met or supplemented by trained volunteers, but that kind of capacity takes years to develop. Furthermore, having the right housing stock for refugees in different household sizes with different accessibility needs cannot be built in one day. There are so many displaced persons across the world, a trend that will only be exacerbated by the climate crisis. We can, therefore, be rest assured that investing in resettlement schemes now will pay humanitarian dividends for decades to come.

In absence of a scheme that would guarantee Ukrainians amnesty in the UK regardless of a willing sponsor, the welcome shown by households across the UK proves that the arguments put forth about a lack of capacity to absorb more refugees is not at all a reflection of reality. There is wonderful potential in the goodness shown across the UK. Now is the time to hold the government accountable to its claims of generosity by demanding it commit to more sustainable and responsible forms of refugee resettlement.

Linkedin
RELATED ARTICLES
OTHER ARTICLES
Following the release of his latest album, the rapper talks about finding a new approach to songwriting, attitudes to poverty, and why his music is more than a political statement.
After rewriting the indie rulebook with her devastating songs about romantic longing, the singer-songwriter is now imagining a future in which the artist is no longer a product.
Yesterday, rail workers came together to protest poor pay, working conditions and job cuts in their latest round of strikes.
In the latest instalment of Photographers in Conversation, the creator talks portraiture, platforms and taking inspiration from Little Simz.
Photographer Bud Glick recounts documenting everyday life in the area, and what it taught him about the Chinese immigrant experience.
With the virus now a global health emergency, we must take steps to fight misinformation and demand a swift UK-wide vaccine roll out, writes Phil Samba.