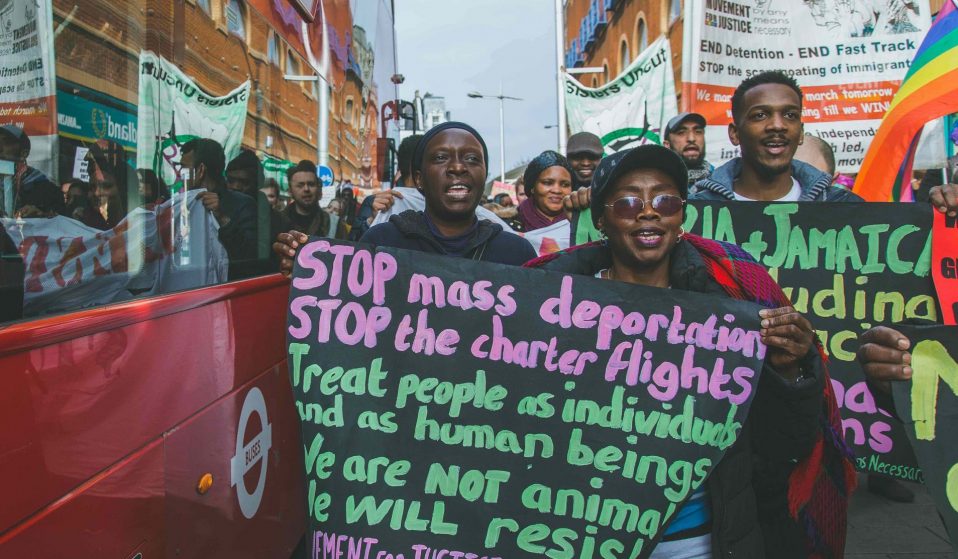 Government immigration policies are driving up Covid deaths. Writer Ziad Al-Qattan speaks with healthcare and human rights campaigners to find out why.

Government immigration policies are driving up Covid deaths. Writer Ziad Al-Qattan speaks with healthcare and human rights campaigners to find out why.

Ayman*, a middle-aged Lebanese man, arrived in the UK two years ago and was held indefinitely in the notorious Brook House detention centre, where his release was eventually secured with the help of a migrant charity. Adjusting to life in the UK was difficult, but he persevered, learning English and taking classes at a community college while lawyers processed his asylum claim with the Home Office.

That was until April last year when he died at home – alone – of Coronavirus. His friends and family in Lebanon begged him to seek medical help, but say he was reluctant to come forward to the NHS for fear of racking up health bills he could not afford, or, worse, facing deportation.

By law, everyone in the UK is entitled to testing and treatment for Covid-19 – including the vaccine – free of charge, regardless of their immigration status. Yet stories like Ayman’s are disturbingly common, and give a clear insight into the reluctance of migrants and undocumented people to engage with the NHS, be it for urgent treatment or a preventative vaccine. For many, it is simply not worth the risk.

It is true that religious and cultural factors can drive so-called ‘vaccine hesitancy’, as can class, digital illiteracy, education, and access to information. Most of the media coverage surrounding the issue of low vaccine intake in BAME groups has focused on these factors which, while undeniably important, don’t tell the whole story. The elephant in the room is the ‘Hostile Environment’, a set of policies implemented by the Conservatives in 2012 which aimed to make life in the UK utterly intolerable for undocumented migrants, in the hope that they would then leave of their own accord or, better, stop coming here in the first place.

In the NHS, this Hostile Environment means patients can be charged up to 150 per cent of the cost of secondary care. Worse, if they cannot pay upfront, they are often flatly refused treatment. For years, the NHS has also shared patient data with the Home Office, information that can be used to track, identify, and ultimately deport migrants. If patients have debts to the NHS, this information is passed onto the Home Office and is used to refuse future visa applications or bar re-entry to the country.

But when asked why some groups might be suspicious of local authorities, Equalities Minister Kemi Badenoch refused to accept any responsibility on the part of the government: “For many immigrant groups, lack of trust in authority is something they actually bring from the countries they come from.” In another session, Badenoch also claimed that “ethnicity is not a risk factor” in Covid-19.

Badenoch’s sinister remarks directly contradict reality, as well as testimonies from those on the frontline of the battle to protect migrant rights. A recent review by Public Health England pointed to barriers to accessing health services, and the stigma and discrimination faced by migrants, as causative factors in the disproportionate impact of Covid-19 on BAME communities. This disproportionate impact led to the mortality rate for migrants born outside the UK and EU being more than double the average during the first year of the pandemic.

Speaking to Huck, Aliya Yule, healthcare campaigner at the charity Migrants Organise, reaffirmed how damaging government policies have been to the integrity of our public services: “The experiences of our members have shown that the Hostile Environment, at the very least, fosters a culture of discrimination in the NHS, and creates fear and mistrust.”

Many organisations have taken positive steps to try and mitigate the damage and alienation inflicted on migrants by these government policies. Local health bosses in Hackney have teamed up with Hackney Migrant Centre to run a pop-up vaccine centre catering directly to the borough’s most marginalised communities, including the homeless and those without any proof of address or ID. In Golborne, North Kensington, in one of the poorest wards in the country, a community-led initiative, ‘Vaxi-Taxi’, aims to boost vaccine uptake in minority communities by providing free transport to vaccination centres.

Even the government, in a tacit admission of this grim state of affairs, recently announced a ‘vaccine amnesty’, a hollow offering of safety from the Hostile Environment for undocumented migrants registering with a GP to receive the jab. In reality, however, the announcement was a belated restatement of existing policy – that everyone is entitled to a coronavirus testing, treatment, and vaccinations for free, regardless of immigration status, and offered no real protection from the risk patients face in having their data shared with the Home Office.

“At the start of the pandemic we [charities] warned that the fear created by NHS charging and data sharing would prevent migrant communities accessing treatment for coronavirus, yet it has taken a year for the government to even acknowledge the harm these policies are causing,” says James Skinner, former NHS nurse and campaigner at health and Human Rights charity Medact.

Aliya Yule stressed that the problems run deeper and will not be solved by rushed announcements or empty reassurances: “Temporary offers of safety – such as the so-called ‘vaccine amnesty’ – are not enough to undo the decades of harm caused by structurally racist policies that have embedded immigration controls into vital public services.”

That is why the ‘Vaccines For All’ campaign, a coalition of more than 370 organisations, is demanding stronger government measures. As well as an end to all Hostile Environment policies, the campaign has called on the Department of Health and Social Care to guarantee that NHS patient data will not be shared with the Home Office, and to fund a public campaign reiterating the universal right to a free vaccine.

The government would do well to look at its neighbours. Ireland and the USA have already created firewalls between health services and immigration enforcement, and asylum seekers living in temporary accommodation in Germany are second in line for the jab. This represents a much-needed recognition that the cramped asylum accommodation provided by the Government makes social distancing impossible and puts migrants at much greater risk of contracting coronavirus.

Of course, there are other issues, aside from the Hostile Environment, that are at play here. In my own experiences within the British-Arab community, it is clear that the mistrust of authority goes back decades, even before the Conservatives took power. In conversations with residents in Ealing and North Kensington, two constituencies with some of the largest Arab populations in the UK, it was surprising to hear some of the reasons behind vaccine refusal. “The government lied to us during the Iraq war,” said one young man from Syria, “why should we believe them now?”

There is also the issue of notoriously unscrupulous pharmaceutical companies, who have a scandalous history of abuse and human rights violations in the Global South. We know, for example, that Pfizer killed 11 children in a meningitis drug trial in Nigeria. It’s not hard to see how such incidents may have eroded trust in the vaccine and undermined public messaging. Then there is the long and well-documented history of forced sterilisation, including in immigration detention centres and prisons. And so, given this very real precedent, it is no coincidence that one of the most pervasive myths about the Covid-19 vaccine is that it is a form of population control.

Others simply resent the racist gaslighting they have faced from politicians and certain sections of the media since the pandemic started: “They say we don’t want the vaccine because we don’t share [British] values, and because of Islam,” says a Palestinian asylum seeker I spoke with in Ealing. Indeed, ahead of Eid last year, the Conservative MP Craig Whittaker made baseless claims that Muslims – and their apparently uncontrollable urges to congregate in large numbers during the Muslim Festival – were to blame for the “vast majority” of lockdown breaches.

Ultimately, it is lived experience that shapes attitudes, and in the case of migrant and immigrant communities in the UK, these experiences have been tainted ones, to say the least.

Part of the reason it has proven so difficult to deal with ‘vaccine hesitancy’ is the term itself. The notion of ‘hesitancy’ obscures the underlying factors driving the phenomenon. For obvious reasons, it suits a government that refuses to accept any responsibility for its mismanagement of the Covid crisis. ‘Vaccine hesitancy’ quietly suggests it is individual whims, and not decades of hostility and violence towards migrants, that are apparently to blame here.

But it is painfully clear that to protect migrants, as well as build confidence in the vaccine in BAME communities, the Hostile Environment needs to end. Only then will people feel safe to come forward for treatment, and will we eradicate the virus across all of society. Doing so is not only a public health imperative, but a moral one too.

Linkedin
RELATED ARTICLES
OTHER ARTICLES
Since 2007, Gideon Mendel has made 20 trips to document floods in 13 countries. The result is an alarming record of what has already been lost to the climate emergency.
A recent High Court ruling against the right to wild camp in Dartmoor National Park sparked the largest land protest in history – and campaigners say their fight is not over yet.
The action took place in response to the 200 asylum-seeking children who were placed in hotels run by the Home Office who have gone missing.
A new law change is enabling Britain’s donor-conceived children to know the truth about their origins – but campaigners say the fertility industry must do more to protect people.
Following the release of his debut single, Deyaz talks battling addiction, dealing with his struggles through music, and building a budding music career from his living room.
Activists and campaigners are fighting back against new laws that would seriously undermine the ability to take industrial action, calling it an attack on fundamental workers' rights.