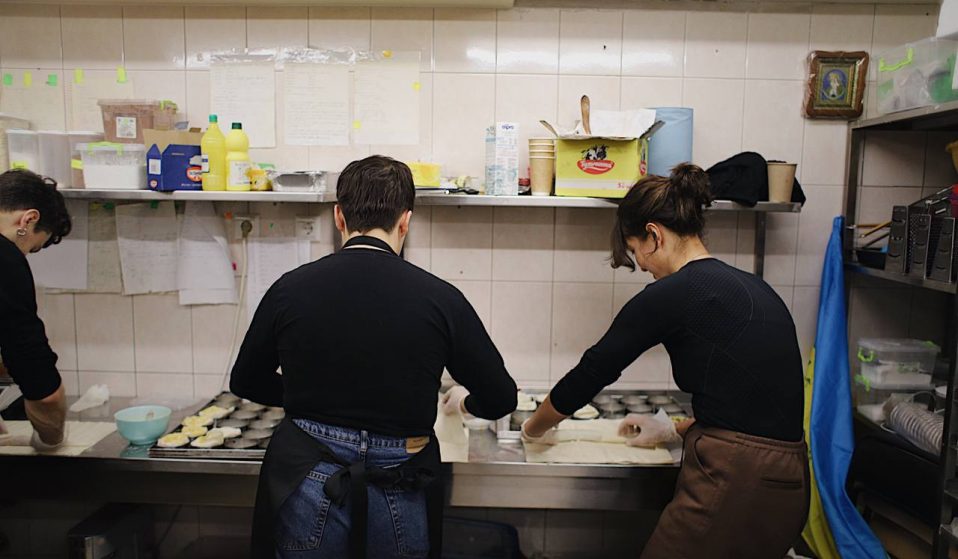 So far, 11 million people have fled Ukraine. But what happens to the ordinary civilians who choose to stay behind?

So far, 11 million people have fled Ukraine. But what happens to the ordinary civilians who choose to stay behind?

On 24 February, life in Ukraine changed forever when Russian forces invaded the country. Although there was concern about an invasion during the first months of the year – with President Vladimir Putin eventually lining up his army dramatically along the border – many still believed Russia could be bluffing to secure certain requests, and there was doubt over whether a full-scale war would ever happen.

Even the night before war, people were going out for dinner or drinks in Kyiv. The atmosphere was lively and relaxed. Ukrainian President Volodymyr Zelenskyy – familiar with doublespeak from the Kremlin, a near-constant threat of war since the 2014 invasion, and a resonsibility to not destabilise through panic at every threat – did not overtly encourage the public to consider leaving, to fortify their houses, or prepare makeshift bomb shelters. In this way, a war that just seemed both inevitable and unfathomable arrived in a country in the full swing of life.

Since the war began, over 11 million people have left Ukraine. And while many people have picked up arms and become immersed in actual combat, many other people have stayed. What is life like for them? Some are young people who have built communities and businesses they don’t want to abandon. Some are elderly or suffering from illness and cannot physically make the journey. Some may feel they have responsibilities that make it impossible to leave. Others stay as an act of resistance. On the radio, Ukrainian MP Lesia Vasylenko said that to go and get your nails done or get your morning cup of coffee in Ukraine right now is to fight. Ukrainians are fighting for, among other things, the freedom to continue their way of life.

“I knew in my soul I had to stay,” says Olga Babentsova, the owner of Mates Kyiv cafe. Olga started Mates during the pandemic as an “everyday neighbourhood cafe that makes simple food which is very, very tasty” – like zucchini waffles with hollandaise sauce – and has nurtured the cafe to become a central part of her local community. 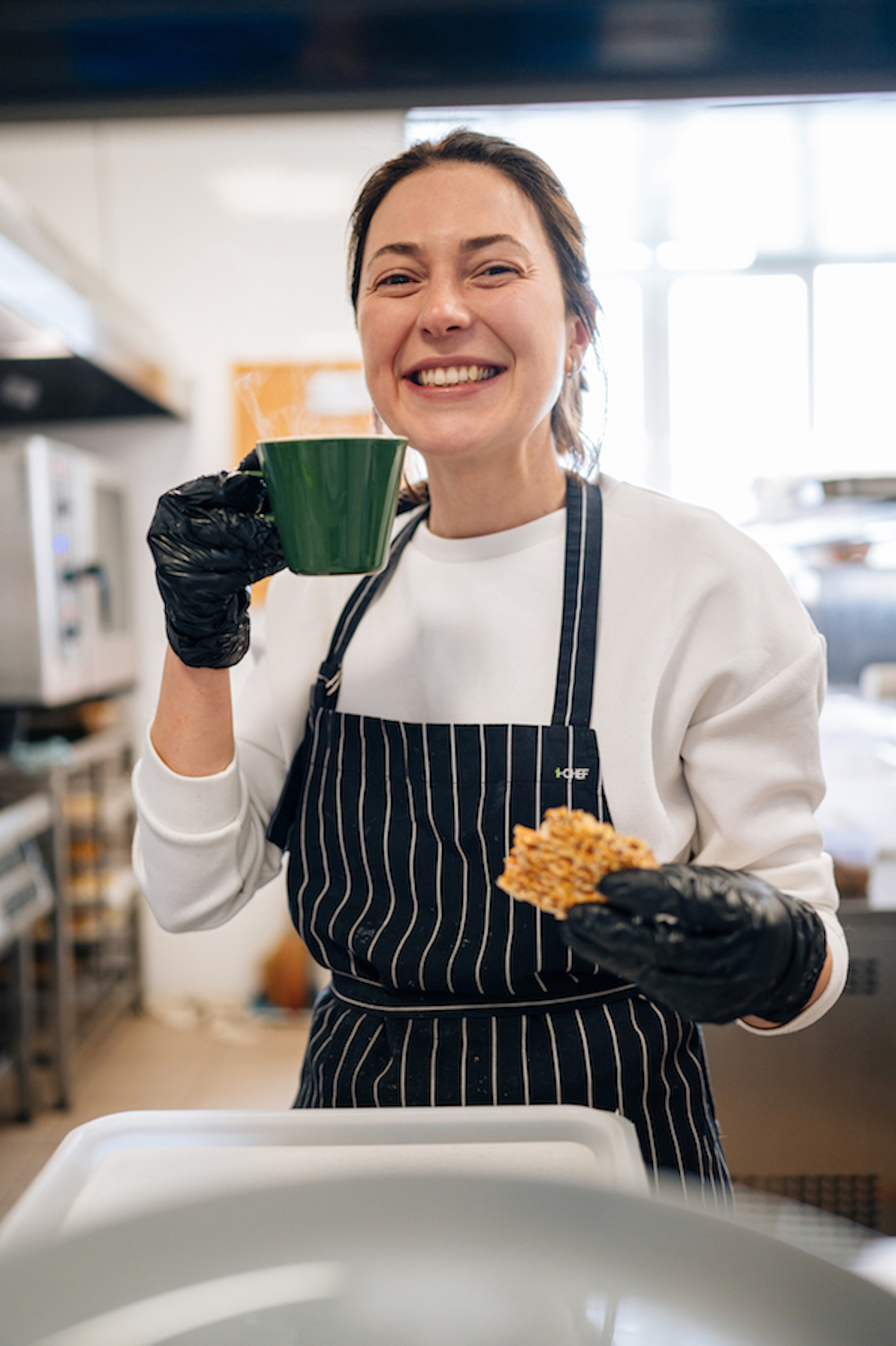 “At the start of the war we moved into the cafe,” says Olga. “We have a basement with a kitchen for the cafe and we can live there safely. We lived downstairs for 25 days. We started making food for our armed forces and people who live near as well as our old neighbours because they have no one to help them buy meals or anything else.”

The cafe has been back open since the beginning of April. “When we started cooking after the war we didn’t have fresh vegetables so we have been making mostly meat, bread and borscht,” says Olga. Things have recently become more difficult, Olga explains: with food now very expensive, they’re having to rely on donations.

Mates is now a part of Kyiv Volunteer – a collective that brings together almost 30 restaurants, cafes and bakeries to provide nearly 13,000 people with food on a daily basis. Supplies go to the armed forces and territorial defence units, healthcare institutions, maternity hospitals, orphanages and elderly people.

Another business in the collective is Avangarden gallery and wine bar – an exhibition space, book corner, and art store full of works by Ukrainian artists and photographers. “This is truly a place for the art community and hedonists,” says founder Karina Kachurovskaya. “In the pre-war period, we were a meeting place for the creative industry.” Now the gallery has changed completely, as they use the space as an emergency kitchen for food donations. But the concept has remained the same: “Every day we work side by side with [volunteers including] a ballet dancer, young entrepreneur, cook, music journalist, Belarusian revolutionary, project manager, barber, dental technician, economist, bartender, costume designer and video editor,” says Karina.

“We stayed in the city because we feel that the soul of Kyiv is its inhabitants. This is our city, and we will help protect it.”

Karina acknowledges, like Olga, the logistical challenges of keeping a business open in a wartorn country. “There are difficulties with the supplies, it is very hard to find the right amount [of ingredients],” she says. “This is a daily challenge. Sometimes we exchange food products with other establishments.” Karina explains that they’ve been able to stay afloat thanks to donations.

Indeed, it is not just the food that is life-saving: it’s the sense of purpose and distraction. No human can live in a perpetual state of fear and anxiety. “We need someplace where we can feel usual life. Life before war,” says Olga. “When they come to Mates people feel something special, because we’ve not changed, we’re still an everyday cafe – your neighbourhood space.” 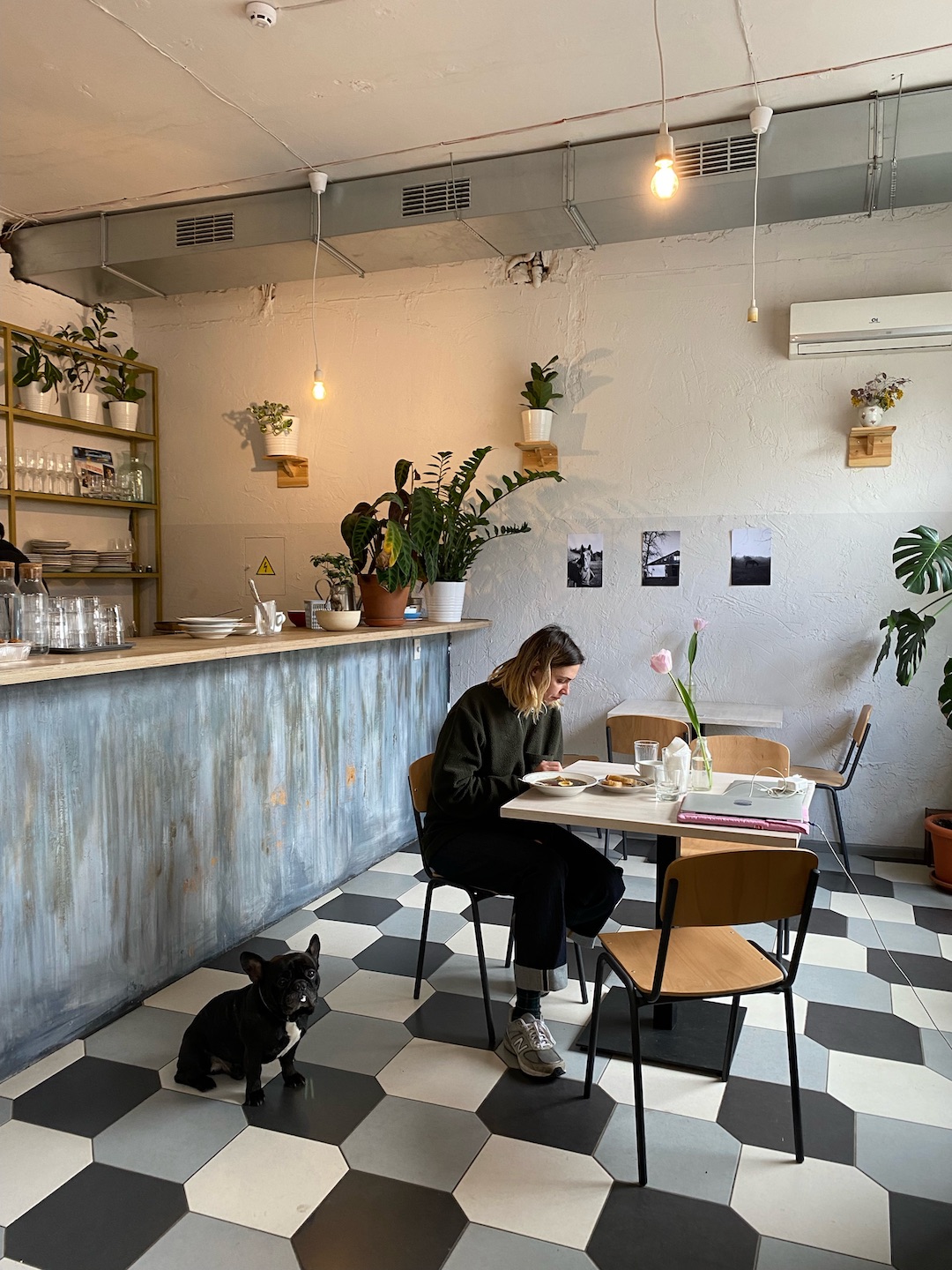 Karina says that life in Kyiv has changed “dramatically”. She describes the empty streets, the constantly sounding air raid alerts, the many checkpoints and fortifications wrapped around sculptures to protect them from possible bombings. “Every day, evacuation trains depart from the railway station; women with children and the elderly continue to move to safer places,” she says.

But where possible, owners of shops, cafes, restaurants and bars try to remain open. Apart from the cinema, Olga says, which are still closed in case people miss the air sirens.

In April, the war entered its second phase, with Putin concentrating the might of the entire Russian army (the biggest in Europe) on the weakened Donbas region while renewed attacks on Odesa and the south and Kyiv loomed. Despite this, both Karina and Olga remain hopeful and look forward to a time when they can welcome more people through their doors and rebuild the Ukraine they dreamed of. 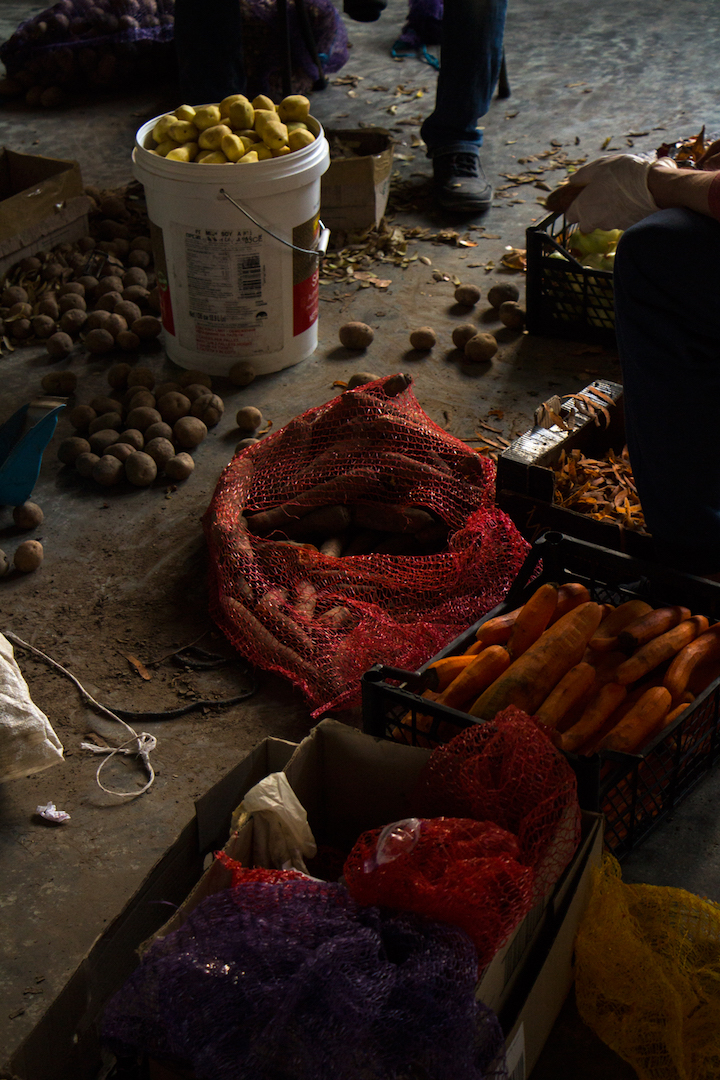 “Now the whole world is looking at Ukraine,” says Olga. “And it’s the perfect chance for our country to make a reputation and show that is very kind, passionate and unified… I don’t have fear I have hope.”

Katrina shares a similar sense of pride for her country. “This war is not for territory or resources, but for values ​​and freedom to be Ukrainian,” she says. “We will win because the truth is on our side. And when everything is over, Ukraine will become a symbol of freedom for the whole world.”

People’s capacity to go on in the worst of circumstances is remarkable. I remember seeing a photograph years ago of a family in Gaza gathered around a TV on Saturday night eating takeout while the city was being brutally bombed outside. This single photograph seemed to me to expose the absolute absurdity of war. It showed the reality and humanity of people who have no choice over the danger they face. War shows us our differences but it also shows us how similar we are.

“We will meet in blooming Kyiv, at the open door of Avangarden gallery and wine bar,” says Karina, “Drink wine, and celebrate life.” 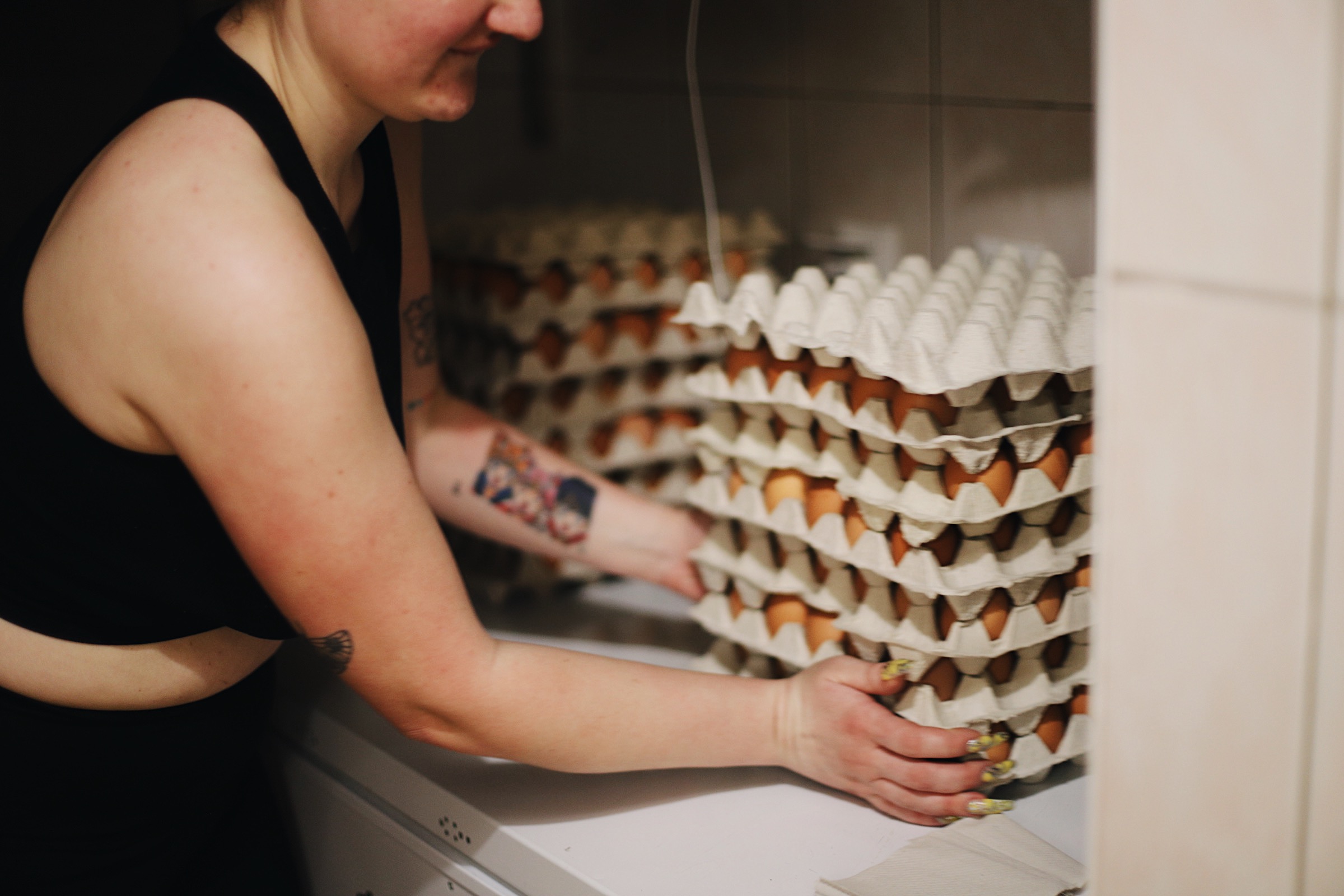 Supplies are getting harder to come by at Mates cafe, Kyiv.

Linkedin
RELATED ARTICLES
OTHER ARTICLES
The situation in Afghanistan remains dire, with many groups facing persecution at the hands of the Taliban.
Photographer Robin Graubard’s debut book offers an unflinching record of turbulence and change across the Balkans.
The failure to hold landlords to account is denying tenants their basic dignity, writes Bella Saltiel.
In the last of our dispatches from OFFF Barcelona, Rufus Deuchler and Vincent Gault discuss the future of creative process.
In the latest OFFF Dispatch, the enigmatic designer dives into his process, connecting the dots between his unique and varied creative output.
Our new magazine is here, starring the inimitable Mitski. Order your copy now and join us on a trip around the world.