News & Politics / The media must end its greenwashing of the Tories 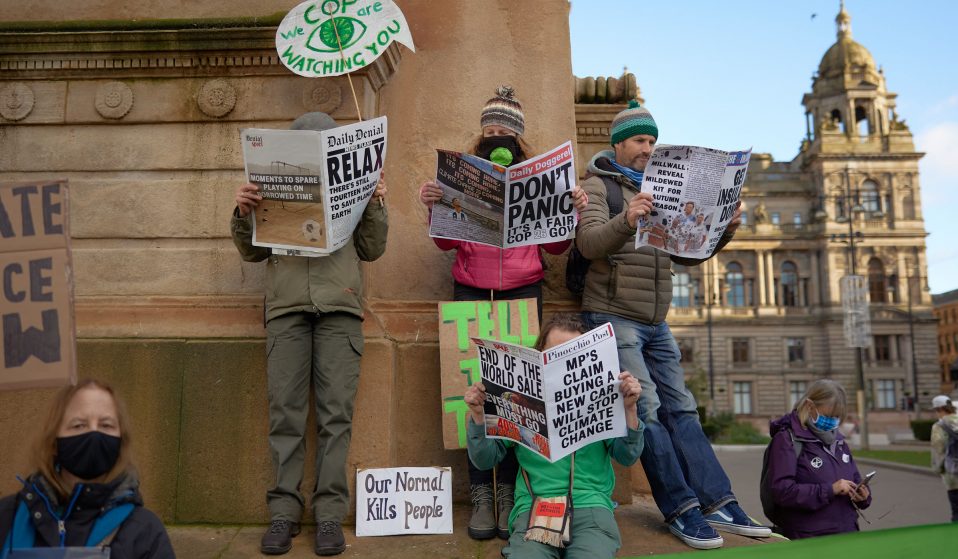 The UK media has a long history of failing to highlight the voices that really matter in the fight against the climate crisis – and this COP26 has been no different, writes Kimi Chaddah.

The UK media has a long history of failing to highlight the voices that really matter in the fight against the climate crisis – and this COP26 has been no different, writes Kimi Chaddah.

If the facts make one thing clear, it’s that we are facing climate calamity. The amount of CO2 in the atmosphere reached record levels this year. With this past decade being the hottest on record and unexpected record-shattering temperatures in the Arctic occurring, the impacts of climate change are quickly reaching the surface.

As the crisis has escalated, so too has public awareness and a desire for substantive action. In June, more than half said they felt negatively about the future state of the environment whilst a YouGov poll published in October found that two-thirds of Brits want the UK to lead the world on climate change.

Despite this, the media is largely failing to convey the urgency of the climate crisis. The UK’s aggressively right-wing press, in particular, has a history of spreading doubt, misinformation and fear about the biggest crisis humanity faces. For years, they’ve used the enormous power they wield over audiences to perpetuate a culture of climate apathy at best and denial at worst.

Historically, sections of the right-wing press have had opinion columns dedicated to denial (a Telegraph piece in 2011 argued that climate change is “make-believe” and one of the “great fantasies”), campaign banners proclaiming “The Great Green Con”, and have platformed notorious climate deniers, such as Christopher Booker, Lord Nigel Lawson and Viscount Ridley. Ridley, who prefers to describe himself as a climate change “lukewarmer”, is a member of the Global Warming Policy Foundation, a lobby group set up by Lord Lawson ten years ago to campaign against policies to reduce greenhouse gas emissions from the consumption of oil, coal and gas. As former editor of the Spectator, Boris Johnson often alluded to the “great physicist and meteorologist Piers Corbyn” in pieces for the right-leaning Telegraph to support his conclusion that warm winter weather had nothing to do with the climate crisis. Corbyn, a known climate science denier, has previously suggested that climate change is “nonsense”.

Denial no longer runs rampant within the mainstream press – but within subsections of right-wing broadcast media, the climate crisis is often framed as controversial and dispiriting. According to GB News presenter Dan Wootton, activists and climate ambassadors employ “hysterical and provocative” language with the only aim of producing  an unshakeable sense of despair. In 2019, talkRadio presenter Julia Hartley-Brewer made her disdain patently obvious when she said: “I know you’re a climate protester, so facts probably aren’t your thing.”

Protestors, in particular, bear the brunt of the negative coverage – with outlets keen to focus on the disruption created by radical action, framing it as fanatical, deviant and against the norm. Recently, Insulate Britain protesters have been the subject of intense media hostility. Rather than focusing on the actual material good that would come from insulating our housing stock, or the policies they are demanding, outlets such as The Sun have instead vilified Insulate Britain for causing “traffic chaos”, while LBC denounced them as “eco maniacs”. This is, of course, fuelled by the Tories, with Boris Johnson branding Insulate Britain “irresponsible crusties”, deploying the same language he used to denigrate environmental protesters in Somerset in 2019.

Time and time again, the media have chosen to publish inflammatory content attacking climate activists instead of platforming activists from the Global South, who contribute the least to the climate crisis, while also bearing the brunt of it. It is their voices which desperately need to be heard. The most blatant example of this is the sidelining of 24-year-old Ugandan climate activist Vanessa Nakate, first in January 2020, when she was cropped out of a photo with other white activists, and again last week, when Sky News was accused of cropping Nakate out of its TV coverage of Greta Thunberg. Of the incident in 2020, Nakate said: “It was like I wasn’t even there.”

Instead of platforming and highlighting the voices and struggles that matter, the media have centred much of their coverage on the lacklustre announcements coming out of this month’s COP26 summit. Some have even used them as a way of greenwashing the Tories. Earlier last week, ITV news’ Political Editor Robert Peston heralded Boris Johnson as an “eco-warrior” – despite the fact that Johnson is preparing to sign off a new drilling permit at an “unscientific and potentially disastrous” oilfield in Cambo. On top of this, is the cut in passenger air duty on domestic flights announced in Chancellor Rishi Sunak’s budget just a week before the UN summit.

While Sunak’s latest climate finance plans are historic, his reiteration of meeting the $100 billion climate finance target for the most vulnerable countries in 2023 should have been reached by 2020 as per the Copenhagen agreement from 2009. In promising to crack down on greenwashing by compelling firms to adopt net-zero policies, many of the initiatives within the announcement will, once again, direct funds towards private companies and not the local and marginalised communities experiencing the full force of the climate crisis. Yet swathes of the media still continue to bolster the Tories’ attempts to brand themselves as leaders on climate change.

We just challenged Rishi on why he is subsidising fossil fuel companies. Not only did he refuse to answer us, he then banned us – the only young people in the room – from his talk.

Is he that scared of young people asking him questions?

The story continues to be much of the same. Announcements that lack the ambition needed to meet the scale of the crisis that confronts us are lauded by the press, while the continued investment in planet destroying fossil fuels, and the communities already being affected by them, are ignored.

Thankfully, a spate of new publications, such as Carbon Brief, Business Green, and dedicated climate sections in broadsheets, are leading the way when it comes to climate coverage. Formed amid the “Climategate” era, when climate deniers hacked emails to present climate science as a conspiracy, Carbon Brief is a publication dedicated to clear, data-driven articles and graphics to help improve the understanding of climate change within and beyond the media.

“Climate change is a story that seeps into everything now,” Leo Hickman, Carbon Brief’s editor, tells Huck. “And it will increase in the years and decades ahead.” For this reason, it’s important that, as Hickman puts it, “an understanding of climate change is embedded and trained across all manner of journalists, whether they’re business reporters, sports reporters, or foreign correspondents, whoever they are.”

“Fundamentally, it’s the same people and the same arguments they’ve been trying to put forward for a long time,” he says. Hickman is cautious as to whether the government will “continue forward in this parliamentary term with its net-zero agenda or whether it may be more susceptible to backbench right-wing voices in the media once the international spotlight has left”.

After years of misinformation, Ofcom rulings and organising pressure, there are some signals of change. In February, following years of climate denial, the Daily Express launched a seven-month campaign for a Green Britain revolution. Last year Rupert Murdoch’s son, James Murdoch, added his name to those criticising climate change coverage at the company’s news outlets, alleging “ongoing denial” of the issue.

Despite the lack of climate journalists, the importance of dedicated sections to the climate crisis is breaking into newsrooms. In 2019, Covering Climate Now, a USA initiative, was launched as a collaboration between over 450 media outlets creating an all-newsroom approach to covering climate. In January 2021, the Financial Times appointed a climate editor, Emiliya Mychasuk, to expand its climate coverage.

But there is still a very long way to go. “There’s a wider question that still hangs in the air”, says Hickman. “While it’s great to have more people on the beat, there’s also a situation where this could be further siloing climate change and environmental coverage into a box.” In reality, the climate crisis can be embedded into each sector within the media, from considering the economic implications of business practices, to how music can be used to mobilise and engage the masses in climate activism.

The climate crisis is the most pressing, urgent issue we face today, and it’s the media’s duty to ensure the public knows the facts and provides accurate, fair and honest reporting. Years of denial represent a complete dereliction of duty, and only by getting people engaged and informed, can we then place pressure on those who wield the most power to tackle the crisis.

Linkedin
RELATED ARTICLES
OTHER ARTICLES
With skyrocketing rents, packed out viewings, bidding wars and more, renting in London has never been harder.
A 37-year-old woman shares how her abortion led her to become a clinic worker, and the abuse she’s received in that role.
The idea that a younger generation is abandoning work has become a popular narrative online, but it doesn’t necessarily reflect reality.
As the Scottish government announces a rent freeze, an activist with Living Rent who fought and won shares how they did it, and what must come next.
The two-day long event returned to London this year, showcasing a spectacular parade, steel bands and Caribbean food.
Financial turmoil is pushing people who work in the sex industry into more dangerous and desperate situations as a means of survival.