News & Politics / The messy history of the nurses’ strikes in 1988 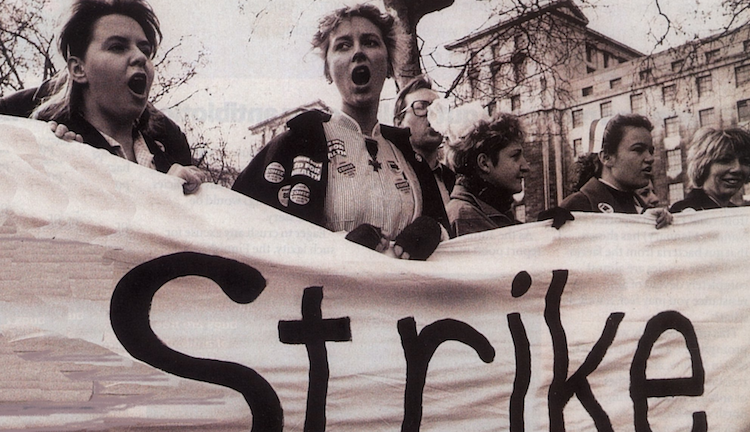 As nursing unions gear up to protest the three per cent pandemic pay rise, people who attended the UK’s first-ever national nurses’ strike reflect on its legacy.

As nursing unions gear up to protest the government’s three per cent pandemic pay rise, people who attended the UK’s first-ever national nurses’ strike reflect on its legacy.

In February 1988, 28-year-old Patricia Murphy was working as a community psychiatric nurse in south-east London. Based at the Maudsley Hospital, she spent most of her professional life on the since-demolished North Peckham Estate visiting patients experiencing acute mental health issues.

“It was a rewarding job, but extremely tough, and not without risk,” remembers Murphy, who now lives in Kent and works as a cognitive behavioural therapist. “If I was on shift in the evening, I’d go out with another nurse for extra protection.”

Personal safety concerns weren’t the only thing making Murphy’s life difficult. Many of her colleagues were quitting nursing in favour of less psychologically demanding, better-paid jobs, which piled the pressure on those who remained. It was a dynamic playing out across the country: up to a quarter of trained nurse positions were unfilled in some British cities by January 1988 – a situation not helped by the profession’s bleak pay prospects. At the time, 40 per cent of nurses earned less than the ‘low-pay’ threshold, which made it hard to recruit and retain new staff. Not only were these shortages dangerous for patients, it further depleted morale among staff – like Murphy – who were trying to stick it out. But Margaret Thatcher, who was prime minister at the time, refused to give nurses a significant pay rise.

“As I’ve got older, I’ve become more strident about women’s care work being underpaid and undervalued,” Murphy says. “Back then, I couldn’t articulate the arguments in the way I would now. But as a nurse in 1988, I thought: ‘This is taking the piss.’”

So on 2 February, Murphy did something she’d never done before. She, along with dozens of other Maudsley nurses, went on strike. They weren’t alone: NHS nurses around the UK staged walkouts over the next two days, protesting low pay, unfair salary structures and untenable working conditions. Strikes took place at more than 40 hospitals in London alone, with trade unions claiming 6,000 nurses participated in industrial action across the country.

“We were out in front of the Maudsley with placards, chanting, and cars were beeping in support as they drove past,” Murphy says. “It was exciting. Nurses had been frustrated for years. We’d tried to express that frustration through the ‘appropriate’ channels, and we hadn’t got anywhere. So we let rip.”

It wasn’t the first time nurses in the UK had protested for better pay and working conditions; demonstrations, walkouts and campaigns by NHS staff started in the early ’70s. But it was the first country-wide, nurse-led strike in 40 years of the NHS – albeit a chaotic and inconsistent one. 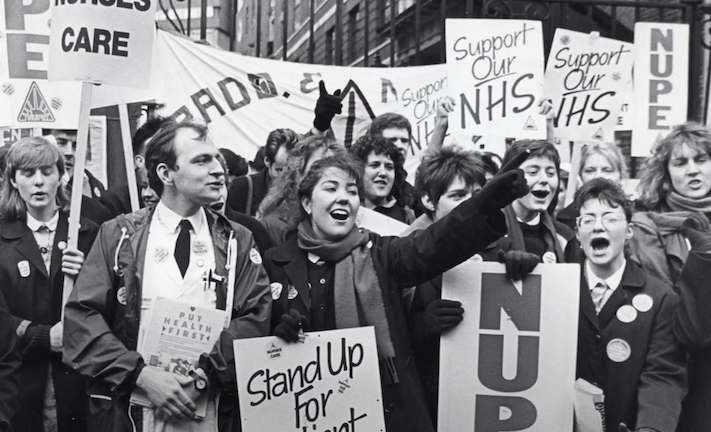 Still “Remembering the nurses’ strike of 1988“ SWP TV via YouTube

“It’s always been difficult to organise industrial action around the health service,” says Dr Jack Saunders, a history lecturer at UCL who studies post-war British labour relations. “There are many personal, moral questions about striking when you’re looking after the sick, and those questions are particularly acute in nursing. It’s a hierarchical profession with a long ideological history of being committed to service and dedication, going all the way back to Florence Nightingale.”

In January 2020, researchers at Oxford Brookes University concluded that the Nightingale-influenced image of nursing as a virtuous ‘calling’ for women, to be pursued out of the goodness of one’s heart – rather than a gender-neutral medical career that should be paid in line with its high skill level – was still pervasive, and contributed to the undervaluing of the profession. But many nurses are driven by a genuine desire to help others, which makes the decision to strike fraught.

“Theoretically, you can say: nurses are workers like any others, and we have the right to use industrial action to defend our living standards,” says Chris Jones, who was a 32-year-old intensive care nurse at Broadgreen Hospital in Liverpool in February 1988. “But striking as a nurse isn’t the same as striking at a car factory. Who cares if a car sits half-made? It takes something else to walk out and leave old Jack, who’s had a stroke, on his own.”

Jones was also a steward for the National Union of Public Employees (NUPE), one of the main trade unions that represented nurses and organised the 1988 strike (it was later consolidated into Unison). “We got nothing but support from the patients, but the more they told us, ‘You’re doing the right thing’, the worse we felt about leaving them,” he remembers. “Even [among nurses] with a hardened trade union consciousness, there was a sense that any industrial action had to be taken responsibly.”

As a result, no hospital was left dangerously understaffed due to the strikes – or at least no more dangerously understaffed than usual. Just 200 of 9,000 planned operations were postponed. Even if every striking nurse had walked out at once, the NHS wouldn’t have ground to a halt; only two per cent of nurses were estimated to have taken part in industrial action. This was partly because the profession’s dominant union, the Royal College of Nursing (RCN), had a no-strike policy until 1995, and denounced the 1988 walkouts.

The government took an even more incendiary tone, with Thatcher accusing striking workers of “hitting out deliberately” at the sick and increasing the burden on “nurses who would not dream of striking because they would never desert their patients”. But this rhetoric didn’t chime with the public mood. Most Britons supported the strike, and an overwhelming majority backed nurses’ demands for higher pay.

“People are hugely supportive of nurses in general,” says Saunders. “But sympathy alone very rarely translates directly into concessions, because it’s easy [for politicians] to ignore. Sympathy in combination with enough industrial and political pressure has an effect.”

In 2021, nurses are once again burnt out, struggling with chronic staff shortages and receiving pay that hasn’t kept in line with inflation – on top of dealing with the once-in-a-generation trauma of Covid-19. And the public, who not long ago were standing on their doorsteps applauding the NHS, appear to support the idea of nurses taking industrial action. According to a recent survey by grassroots network Nurses United, 94 per cent of the public don’t think the three per cent pay rise – given to NHS staff in England and Wales in recognition of their efforts during the pandemic – is adequate. An earlier snap poll suggested 78 per cent of the public would back NHS workers striking against low pay, with 45 per cent “strongly” approving of such a move.

“Nurses know the public are behind us, but we don’t feel supported by the government,” says Rachel Ambrose, an NHS mental health nurse, member of Nurses United UK’s core leadership team and the founder of the Nurses of Colour network. “The NHS has survived because of staff’s goodwill, and just like in 1988, nurses’ goodwill is waning. We’d never leave our patients without care, but the government isn’t listening to us, and that’s pushing us towards more drastic action – which could include a strike.”

The RCN, which is demanding a 12.5 per cent pay rise for nurses, recently launched indicative ballots of members in England, Scotland and Wales to gauge whether they’d be willing to take industrial action over pay. (Nurses in Scotland have had a four per cent raise, while Northern Ireland has yet to announce a new pay award for NHS staff.) Other trade unions representing nurses are also laying the groundwork for possible protests. Industrial action could mean ‘working to rule’, where nurses take all their allocated breaks and start and finish shifts on time. Or, it could see them standing on picket lines outside hospitals, just like in 1988.

An RCN spokesperson told Huck: “The government can stop this right now by giving nurses the pay rise they deserve.”

The 1988 strikes didn’t fix everything. Thatcher did eventually grant NHS nurses an average pay rise of 15.3 per cent, but this was less than they’d asked for, and didn’t bring them in line with comparable professions. Other issues, such as poor working conditions and low staffing levels, went unresolved.

But, says Murphy, striking can be powerful even if it doesn’t immediately have the effect you desire. “If you have a voice, it’s so important to use it,” she says. “If all it does it relieve some pressure inside you, that’s still worthwhile. You can say: ‘I stood up for what I believe in.’ And that matters.”

Linkedin
RELATED ARTICLES
OTHER ARTICLES
Members of the collective share some of their reasons to run as part of #UnitedBySummits, a campaign that looks to uncover transformative power of the outdoors.
After news broke last week around an expected reversal of the 1973 landmark law that made abortion legal in the US, protestors gathered in the UK in support of American women.
In the last of our dispatches from OFFF Barcelona, Rufus Deuchler and Vincent Gault discuss the future of creative process.
Over the weekend, London locals came together to resist a pre-planned police raid targeting delivery drivers.
The revered showbiz chronicler recalls his journalistic beginnings, documenting subcultural scraps in the ’80s.
The situation in Afghanistan remains dire, with many groups facing persecution at the hands of the Taliban.