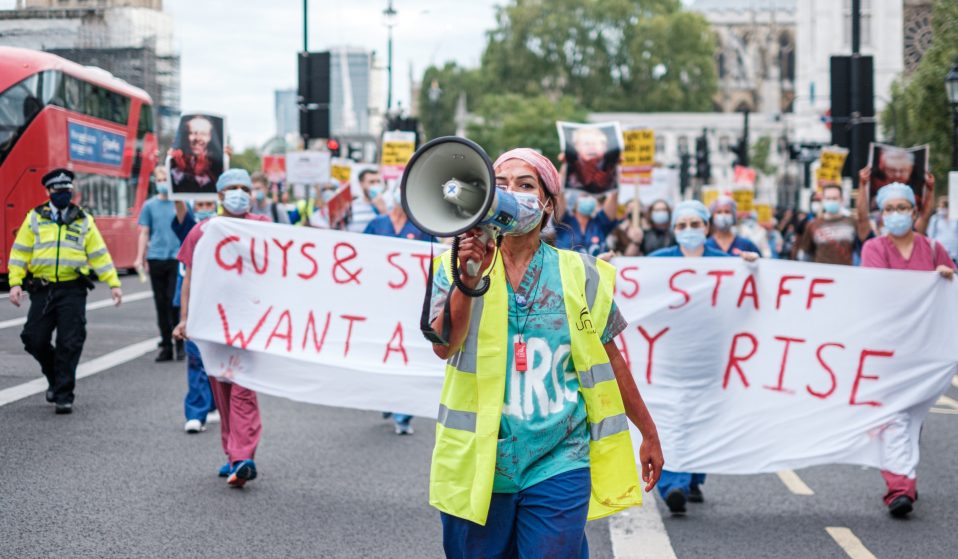 Frontline migrant health workers are risking their lives amid the pandemic, all while being made to pay extortionate visa charges. When will the Government care for the people who care for others?

Frontline migrant health workers are risking their lives amid the pandemic, all while being made to pay extortionate visa charges. Grassroots organisations are now calling on the Government to care for the people who care for others.

Shantel came to the UK from Jamaica with her parents and siblings twenty years ago, aged seven. She went to primary school and secondary school here and is now working on the NHS frontlines, doing agency work in rehabilitation hospitals for those with mental health problems and in care homes. Every day she goes to work, changes into full PPE and does lateral flow testing multiple times a week. It’s “uncomfortable, stressful and overwhelming,” she tells Huck over the phone during her break.

Shantel has no choice but to work assiduously because there are visa fees to pay, of which she estimates to have paid over £15,000 in her life. Every few years, when it is time to renew her visa, there are lengthy and complicated forms and fees to pay. The visa fee varies according to your circumstances, but a standard range is from £600 to £3000. Then there is the health surcharge, a fee introduced in the Cameron-Clegg coalition, billing migrants £624 per annum for the NHS which has to be paid upfront. If you have children it is more.

Shantel’s situation isn’t unusual, in fact, thousands of people across the UK face these punitive costs every two and a half years, on top of taxes and usual living costs. Many face tough compromises so they can make the payments, from ‘Do I buy my son new school shoes or do I buy myself some lunch?’, to ‘Do I top up the gas meter or do I walk over an hour to work?’

Others are priced out of legal status entirely. “No-one should be forced to make such a choice”, says Nazek Ramadan, director of Migrant Voice, an organisation fighting back against anti-immigrant rhetoric. 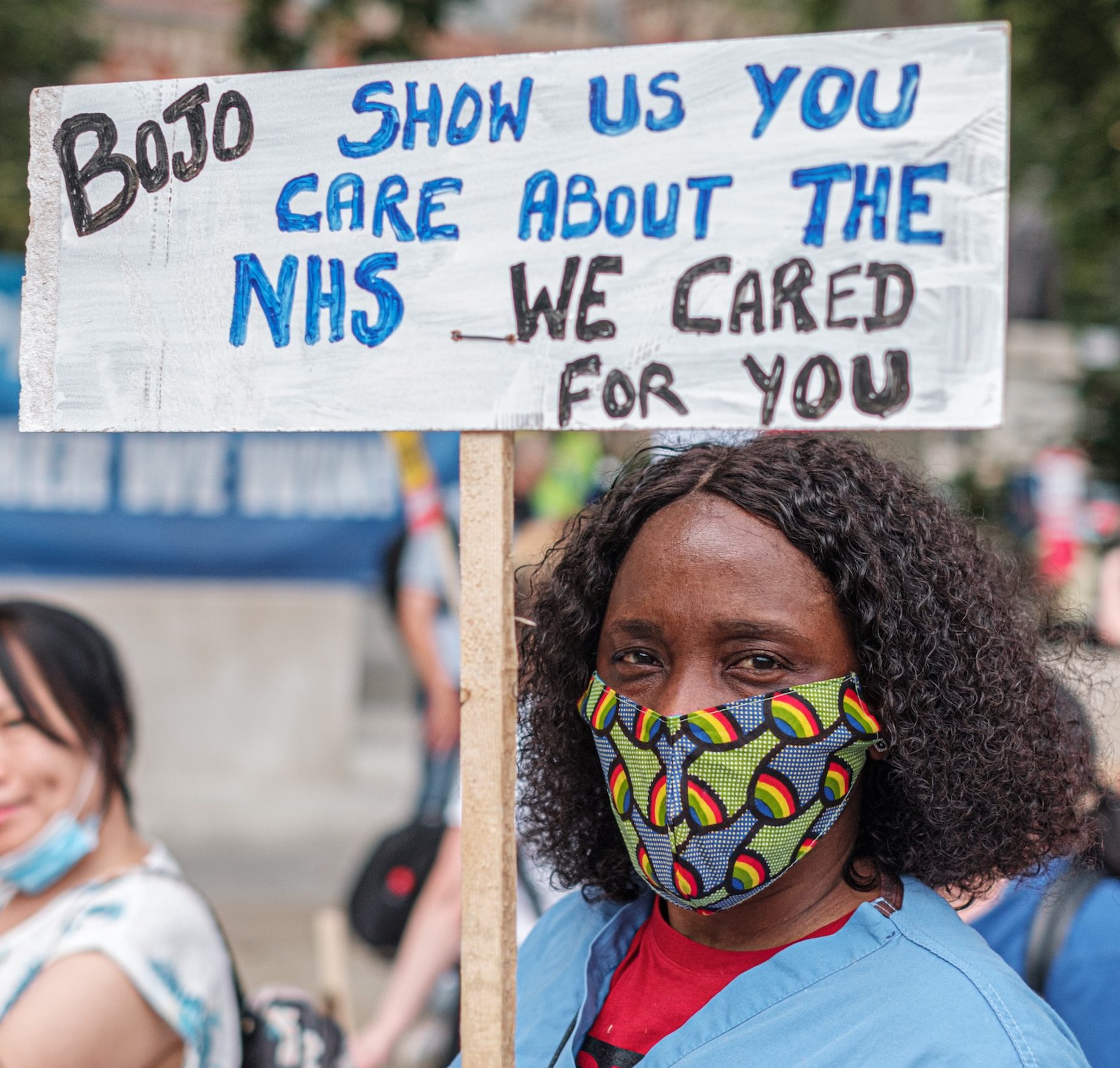 Despite the UK’s lip-service ‘Clap for Our Carers’, this new-found appreciation for health workers is yet to be reflected by their salaries. In May last year, the Government announced free visa extensions for NHS staff, but it only applied to doctors, nurses and allied professionals and excluded low-income workers such as porters, cleaners and healthcare assistants.

The Home Office deems Shantel ‘unskilled’, but this isn’t by any choice of her own; one day she hopes to study at university. At 18, she was still on her Mum’s application [as a dependent] due to poor advice from the Home Office – she feels let down by her school and the Government for not noticing this error, which has now held her back later in life. At one point, the family became homeless and so university was never an option.

“You’ll never know what the Government will do next; they’re not trying to make it easy,” Shantel says. She adds that she was shocked when the surcharge came in, recognising that many “migrants are stuck in low-paid work as it is”.

“Immigration rules in the UK are really complicated. There are changes upon changes upon changes. The Home Office struggles to understand their own rules and so often get it wrong. It’s no surprise when they operate a really byzantine system,” says Narmi Thiranagama, a UNISON policy officer. It’s not uncommon for migrants to make mistakes with the application process and they are often afraid to seek help.

From January to March of 2020 alone, the Home Office made at least £38,267,034 in profit on visa fees from people applying to be with their families in the UK. The Home Office said to Huck, “we are very grateful for the vital contributions all NHS staff have made during the pandemic”. But their actions tell a different story.

“I have to break my back every single time at work because the Covid numbers keep increasing. It’s heartbreaking,” says Folsade who is from Nigeria and has worked in Good Hope Hospital, Sutton Coldfield, since 2009.

Low-paid migrant workers are providing vital services and support to people in this difficult time and many are putting their lives at risk. Yet the Government only seems concerned about higher-paid migrants. There’s an almost Dickensian, “Victorian attitude that poverty is a moral failing”, says Zoe Gardner, a policy adviser at the Joint Council for the Welfare of Immigrants. 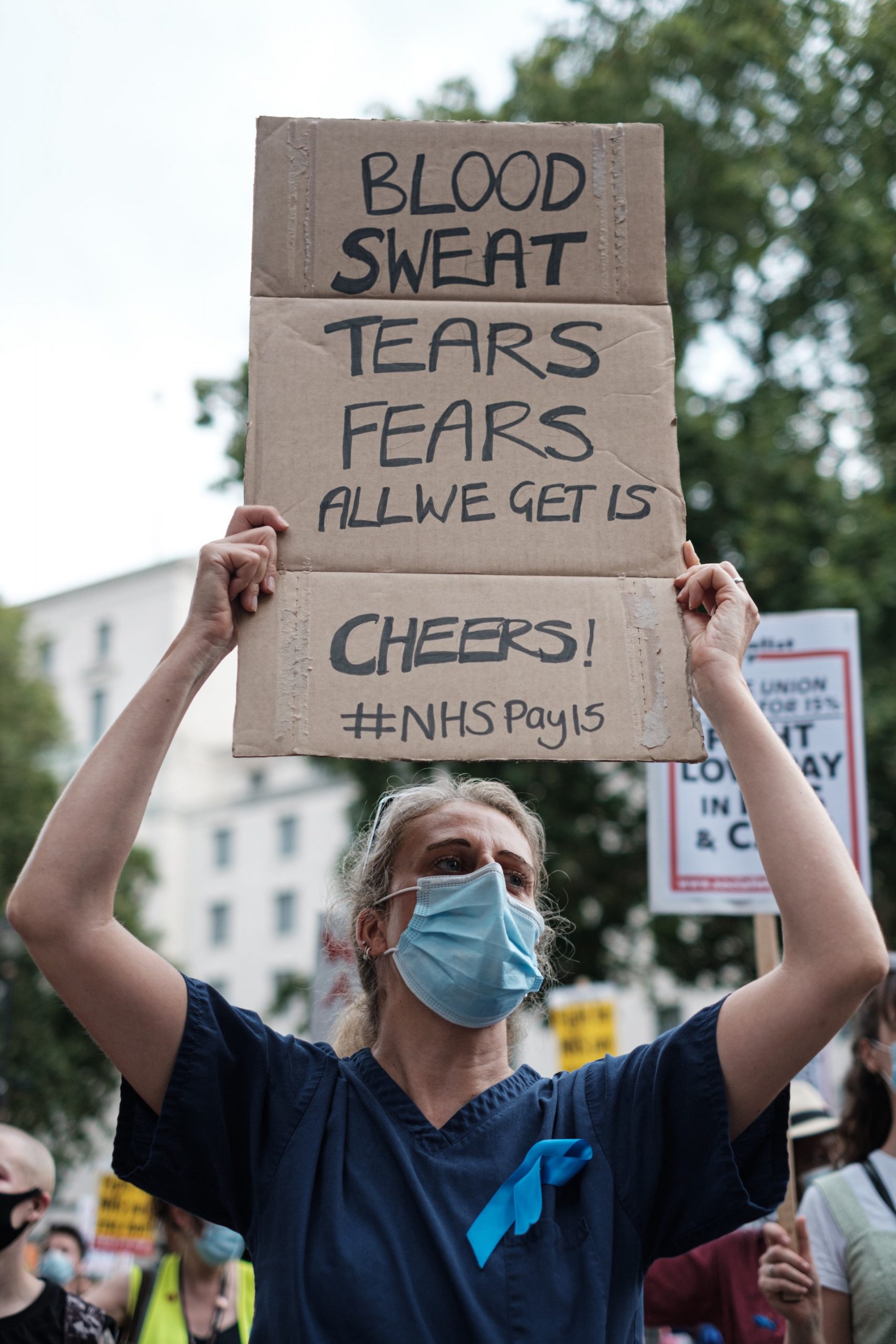 Those on low-pay work extremely long hours and shifts, all while paying their bills and taxes and straining to save large sums of money for the renewal of their UK work visas and the health surcharge. “I’ve been doing back to back shifts when people are off sick,” says Shantel. Folsade relates a similar experience: “I’ve been going in and out of work for the last six days because I need to pay off some bills. The wards are filled to the brim and lots of my colleagues have Covid as well.”

Despite this, Folsade is determined to carry on: “I see giving support as a privilege.” She works all the hours she can, including night shifts, but still finds herself in debt from the fees. Her son wants to study engineering at university, but they can’t afford it. She tells Huck her only regret is bringing her son here, as she constantly worries about failing to give him the best.

Anna Miller, head of policy and advocacy at the charity Doctors of the World, points to the total lack of empathy and understanding towards what it’s like for somebody who is desperately trying to keep their immigration status. One Home Office minister said migrants should rely on “investments and cash savings” to meet visa requirements during lockdown. It’s an absurd remark to presume people are fortunate enough to have savings. Matt Hancock has also publicly defended the fees, once saying, “It’s the National Health Service, not the international health service.”

Bridget, a migrant working with vulnerable women says, through tears, “We have our national insurance contribution and we’re being taxed. Some people don’t even visit the GP. We don’t understand it.” Nazek of Migrant Voice believes migrants are “being penalised for working and contributing to the nation” and Harjap Bhangal, a UK Immigration Lawyer and Partner at Global Legal Solutions, is incensed by the system, calling it “callous and heartless”. Essentially, the Government wants an exclusive health service, but one that is staffed by international workers. 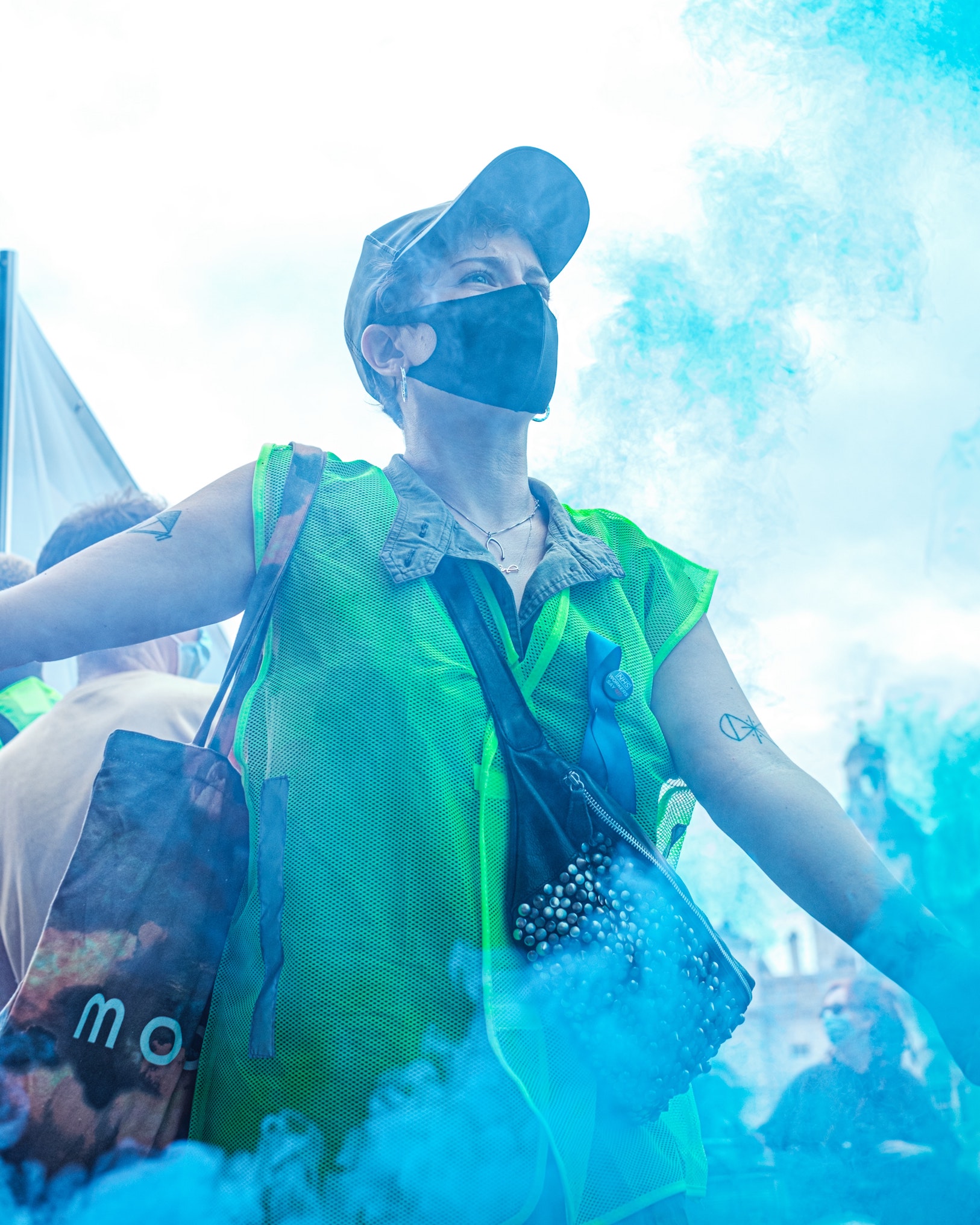 Both Nazek and Zoe share with Huck a similar, and apparently common, story, whereby families have had to downsize their house in advance of renewing a visa. People have been scared that the pandemic could affect their income and they’d become undocumented – this is what failure to pay fees results in.

Becoming undocumented is “dreadful for the individual,” says Miller. It means one cannot register to vote, work, rent a property, open a bank account, access education or get a job. Those with an active asylum claim get a pitiful £37.75 from the Home Office. There’s a psychological impact too: Felipe Arajuo became undocumented after university and describes living in “constant fear of law enforcement,” his legal status affecting “every aspect of my life and relationships”. We know from members of the Windrush generation how the policy harasses and mistreats. Anna believes the solution should be opening up pathways for undocumented people to regularise their status, adding that “any [visa] charges undermine that direction”.

At the joint Council for the Welfare of Immigrants, they are proposing systems based on evidence of what governments do in other countries and systems that would work, yet they are still “treated with contempt by the Home Office,” says Zoe. At UNISON, they’ve been providing unprecedented emergency grants for people working on the Covid-19 frontlines and members who are facing real financial difficulties, on top of constant campaigning and lobbying.

We often talk about how badly paid public service workers are, as well as the kind of austerity and pay freezes they’ve had to endure over the last 10 years. Narmi, of UNISON, says anyone who’s a migrant worker “will have had all of that, while saving thousands of pounds for fees”. The “bureaucratic burden,” she says, is huge.

Migrants in the UK have been products of constant policy changes – this is, sadly, what happened with the Windrush scandal. The immigration health surcharge is impacting the most fragmented, most exploited, lowest-paid part of the health and social care workforce. As health worker Folsade observes: “I don’t know why the Government finds it difficult to care for the people that care for other people.” 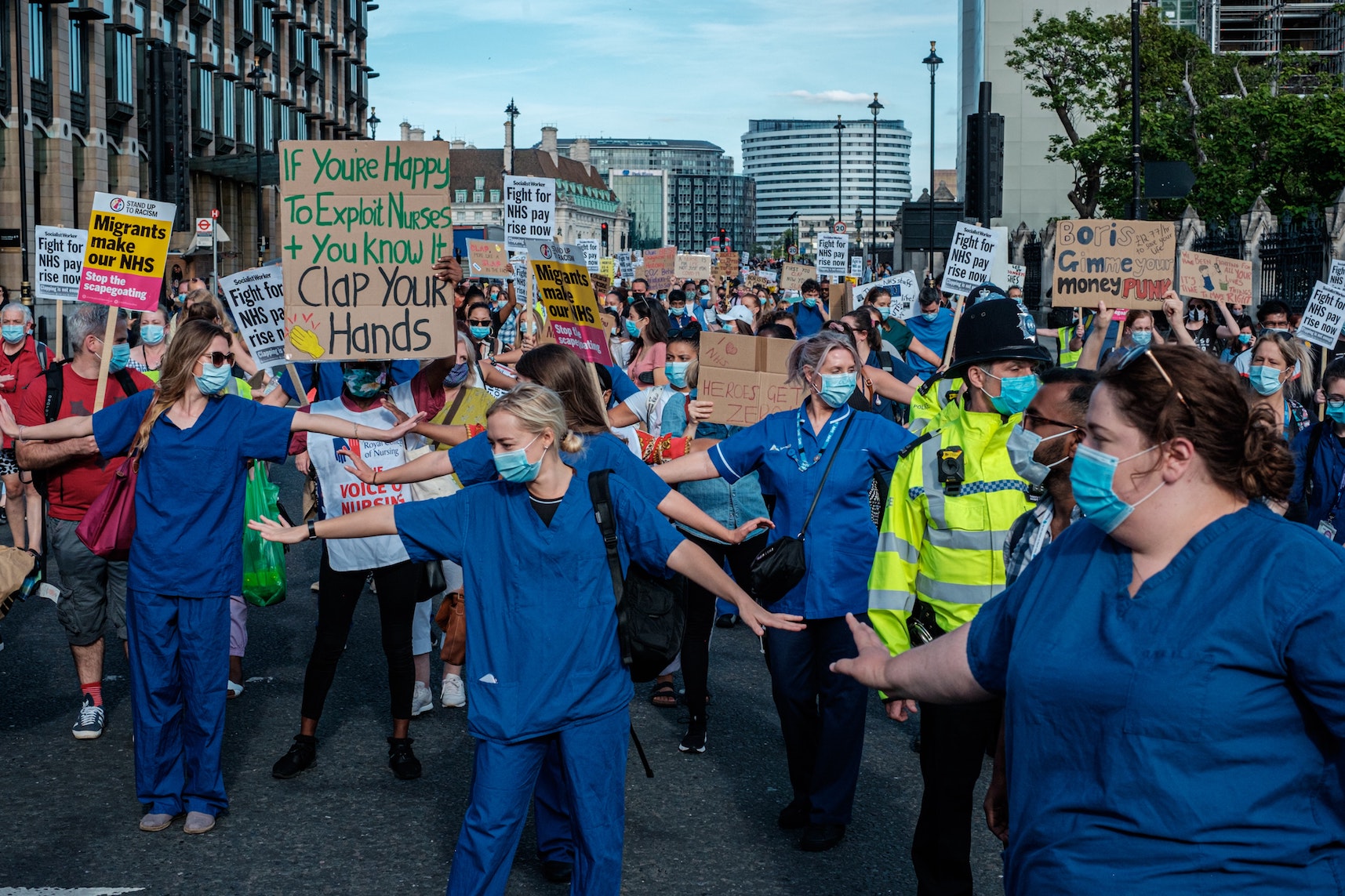 Linkedin
RELATED ARTICLES
OTHER ARTICLES
Our new magazine is here, starring the inimitable Mitski. Order your copy now and join us on a trip around the world.
A group of Ukrainians living in Poland are helping Ukraine withstand Russia’s brutal invasion by buying supplies and shipping them directly to the war’s frontlines.
Photographer Phyllis Christopher recalls capturing sex and protest at a time when the city had become a haven for the queer community.
The author discusses her blistering new novel about history, revolution and queer love.
While protests over abortion rights rage in the US, access to abortion services is still almost nonexistent in parts of the UK.
From the Yakuza to a biker gang, Bruce Gilden recounts capturing Tokyo and Osaka in the ‘90s.