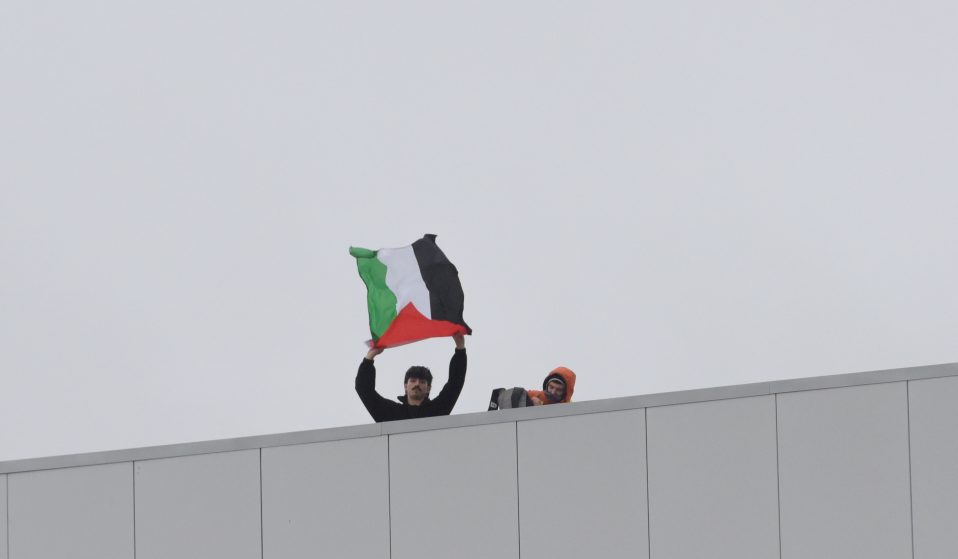 Yesterday, protesters seized Liverpool’s ACC venue in a demonstration against the Electronic Arms Fair taking place in the city this week.

Yesterday, protesters seized Liverpool’s ACC venue in a demonstration against the Electronic Arms Fair taking place in the city this week. From the ACC roof, Huck spoke to activists who had successfully scaled the building and to those on the ground.

As evening fell over Liverpool on Monday 11th October, two protesters from the activist group Palestine Action gained access to the roof of the city’s ACC building in it’s historic docklands. The action saw eight activists attempt to breach the arena in a bid to halt the Electronic Warfare Event (AOC Europe 2021), one of the foremost exhibitions for military weaponry and equipment in Europe.

The event has been criticised by Amnesty International and other human rights groups for their role in supplying Saudi Arabia with armaments. Among its ‘European Rotation’ of host countries are Sweden, Germany, Netherlands, Italy, Switzerland and the UK. Protesters in Liverpool are demonstrating against the two day conference, which began on the 11th and is expected to close 13th October.

“We’ve done this kind of thing before, but this is probably the most hopeful we’ve felt,” one of the activists on the rooftop, who wished to remain anonymous, told Huck. “There were eight of us to start, but only two of us managed to break past security and get on the roof. We’re hoping to stay here as long as it takes. We just want to keep building momentum around the issue. This way, they can’t ignore us.”

The action came just after the implementation of a dispersal zone around the fair, designed to limit protest and opposition, which was heavily criticised by local Labour MP Ian Byrne.

An event which shames our great city is now protected from legal & legitimate protest by a dispersal order which further adds to the charges which must be levelled against the people who have enabled this to happen. https://t.co/egAovgPjDa

As coverage of the ACC occupation by members of Palestine Action spread online, support on the ground intensified. Protesters arrived at the King’s Docks and sustained efforts continued into the mid afternoon, with many wielding Palestinian flags and banners that read ‘Murder’, ‘Shut Elbit Down’ and ‘Stop the Liverpool Arms Fair’.

Amy*, a 24-year-old attendee of the protest, told Huck: “80 per cent of weapons exports come from out of the UK. It’s frightening knowing that drones and bombs are potentially being sold opposite schools, and on the front doorsteps of housing estates.” Alarmingly, BAE systems and Raytheon, both companies with a presence at the exhibition, have been accused of selling deadly armaments to Saudi Arabia and the UAE to be used in Yemen. Also present at the exhibition is UK-based arms company Elbeit, which is alleged to have tested weaponry on Palestinian civilians.

“What does this say about us? We’re supposed to be a place of safety for vulnerable people fleeing war. It’s a total blow to the Yemeni and Afghan communities [in the city] and a form of re-traumatisation,” says Mark*, age 45, who also took part in the protest.

“We can’t even get close enough to show our support because they’ve placed a dispersal order on us all. ‘It’s private property’ they keep telling us,” another protestor, Aiden*, age 23, told Huck. In addition, Merseyside Police Force’s special Public Order enforcement team were seen a mile and a half away from the docklands, stationed along Brownlow Hill – one of the main points of access into the heart of the city centre. This increased police presence and cordon has resulted in over six people being arrested during the course of the two-day demonstrations,** including a man and woman on suspicion of  conspiring to commit criminal damage at a local hotel. 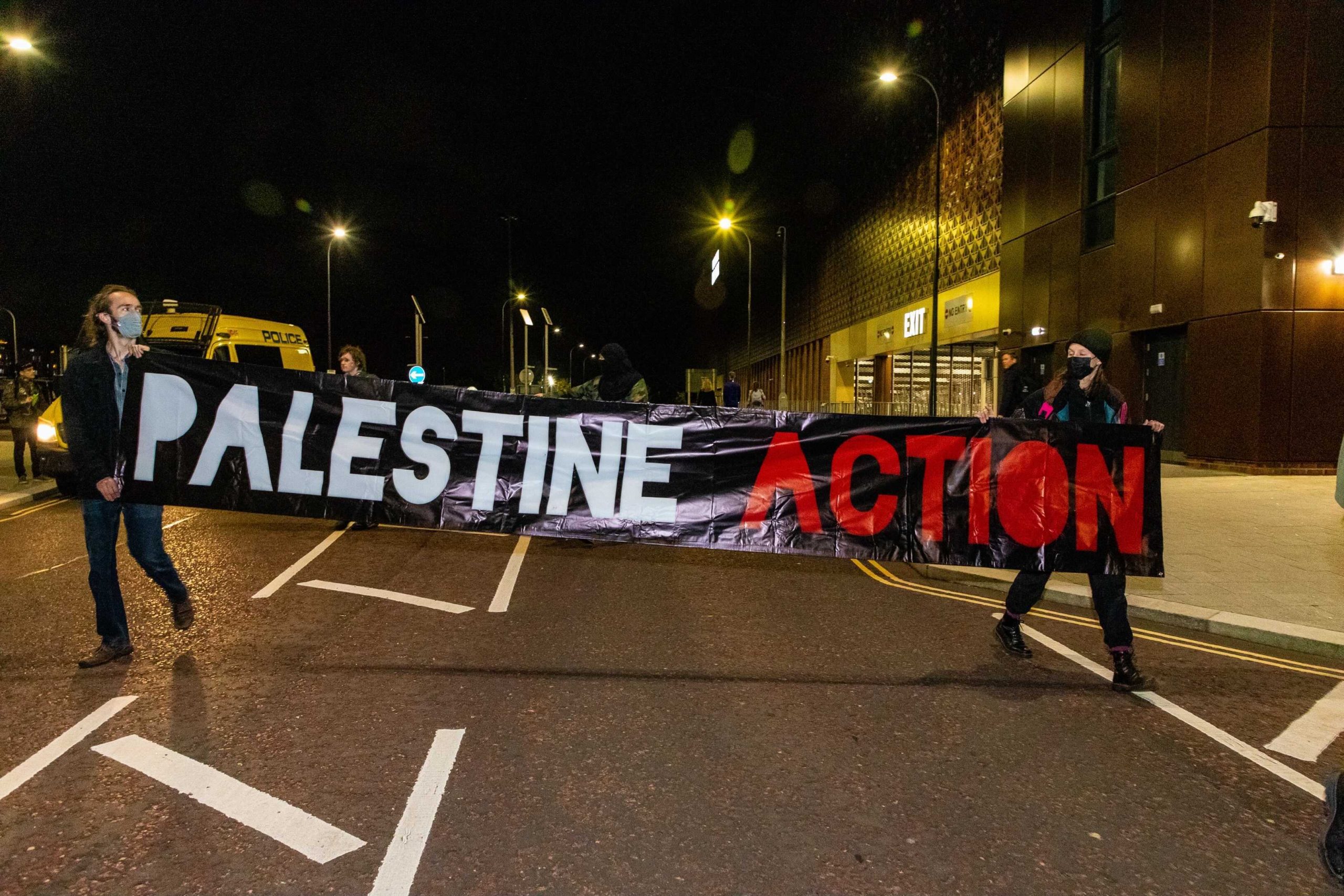 There is wide grassroots support for blocking further arms related conferences in the city. Last month a protest against the fair drew hundreds with members of the UCU and UCL trade unions, Labour party figures such as Jeremy Corbyn, local MP’s and Yemeni community leaders coming out to the rally to give speeches. In a bid of support, Massive Attack, who were due to perform at the venue, cancelled their show in protest.

Despite these efforts, many campaigners still feel they aren’t being heard, and that the Council haven’t done enough to stop the conference taking place. “The City Council have let this happen,” Aiden* says. This feeling that the Council has been apathetic to public concern follows a statement from Liverpool City Mayor Joanne Anderson in August of this year in response to growing opposition to hosting the Arms Fair. The statement read: “AOC Europe 2021 raises serious moral and ethical questions; I am appalled that this even is being held in Liverpool—in one of our buildings (…) However, the inescapable fact is that it is lawful, and we have no public powers to stop it.”

The activists responsible for the ACC takeover say they are only just beginning to scratch the surface when it comes to bringing attention to the cause and that more needs to be done to divest to ensure that AOC and other conventions like it have no material future within the city. “Just last week there was a boxing match right next to the Arms Fair and you had people coming in from outside the city. Not many people care, or know what’s happening – that’s why we’re here,” said one of the two protestors who scaled the building.

“You’d like to think this wouldn’t happen in Liverpool but it’s a lot closer than you’d think,” the protestor, speaking to Huck from the roof, continued. Liverpool has always been a place where we’ve been aligned with global freedom struggles, but unfortunately, this Arms Fair is coming at Yemen’s expense, and we’re seeing the distance that it’s creating. We’re calling for an end to the sale of arms across the UK, because this is a problem not just for Liverpool.”

Following the events of the protest, Kim Johnson MP for Riverside called on the ACC’s board of directors to reconsider their endorsement of the Electronic Arms Fair. She wrote: “The current Mayor, Liverpool MP’s and councillors from all parties have made their views extremely clear about the values that we hold dear for our city, not least because we are proud to be a City of Sanctuary, welcoming refugees from war-torn countries such as Yemen, Libya and Afghanistan,” The Labour MP went on to implore that the venue “reconsider [hosting] the event, in the face of reputational and potential financial damage”.

My letter to the ACC Liverpool pic.twitter.com/BCa3G7Poes

On behalf of the ACC Liverpool Group Max Steinberg, Chief-Executive of the group, responded stating: “AOC Europe is a conference and exhibition that attracts attendees from across government, defence and academia to share information, ideas and technological advances to allow the development of technological systems, in order to make the world a safer place… There [also] are contractual and legal reasons why it is not possible to cancel this event.”

Yet the activists in question remain hopeful. A crowdfunder set up by Palestine Action has received more than 190 donations so far. Campaigners hope sustained public pressure from the community will force the local council to rethink its policy and that this staged coup will keep similar Arms Fairs from making a return. There are, at present, three venues in the UK that still deal in the trade. But the resistance of Palestine Action and other actions groups such as Campaign Against Arms Trade, show they can be driven out of major cities.

**Since reporting it is alleged that two of the protesters in question have been arrested by police. Huck has been in contact with Merseyside Police for comment and is awaiting to find out the developments as to their whereabouts and well-being.

Linkedin
RELATED ARTICLES
OTHER ARTICLES
A new podcast is opening up the conversation between trans women and trans amorous men in the hope of building coalitions.
After a two-year hiatus and a new album, the Nigerian artist is riding high. Now, he wants to bring his alternative, genre-bending sound to the world.
After blocking the Scottish government’s gender recognition reform bill, Westminster is now devising further changes to the law to make it harder for trans people to self-identify.
Mass crustacean die-offs in the North East have led a community of fishermen to take action to save their seas.
Taking us through one of the most dynamic years in recent history, Laylah Amatullah Barrayn new photo book contains tender yet confrontational portraits.
The first-generation graffiti artist reflects on the tagging’s emergence as an art form and the players who pushed the medium forward.