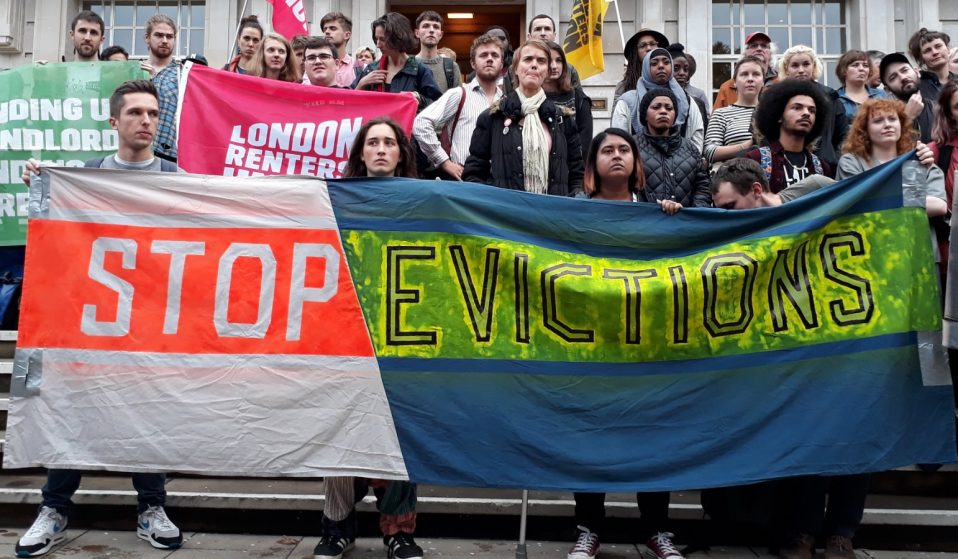 The pandemic has led to a dramatic increase in illegal evictions, leaving tenants in desperate situations.

The dramatic increase in illegal evictions brought on by the pandemic continues to leave tenants in desperate situations, often stripped of their possessions and made homeless.

On 4 November this year, Beata, age 33, was evicted from her home in Walsall. Her landlord told her she had 20 minutes to pack up her most important belongings and leave, with a day to come back and get the rest of her things.

Beata is on the brink of tears as we talk over the phone. It’s been less than two weeks since she lost her home. She can’t sleep. She can’t even tell her five-year-old daughter, Agata, what’s happening. “She just asks me every single day, ‘When can I go back to my room? Where’s my home gone?’”.

For months, the landlord had been ignoring almost all of Beata’s requests. This included fixing a broken radiator; stopping water coming through the roof; and sorting out the mould coming from the floor, which was giving Agata an allergic reaction. “She [the landlord] never answered. She did nothing,” Beata says. If there was ever a response, it’d be the landlord replying to say if Beata had any problems, she ought to move out. “I lived there for four years and I didn’t see her. She never sent anybody to fix anything.” In October, Beata sent a message asking if she could have a short delay in when she paid her rent – again, the landlord didn’t answer.

After telling the landlord that she had complained about the conditions in the house to the council, she was then almost immediately served with an eviction notice. To evict a tenant without filing notice in advance is illegal. Beata wasn’t able to collect her £1000 deposit and the next night, she was told by a neighbour that the landlord was in the flat taking away her remaining possessions.

Beata could only watch as they left with her belongings: a fridge, a washing machine, her daughter’s bed. A whole life swiftly rolled away. Her landlord told her these items was confiscated because she still owed them money, but even now, after paying back everything they’ve demanded, her former landlord still has her mirrors, curtains and more and are refusing to return them.

Illegal evictions, already a worsening problem before the pandemic, skyrocketed after coronavirus hit the UK. It’s down to a combination of factors: for starters, a ban on legal evictions that was introduced in March 2020 and fully ended in June of this year, which has seen many landlords choose the illicit alternative; the rising unemployment and economic insecurity from the pandemic; and a lack of repercussions for illegal behaviour from landlords. Data from this time last year found that the rate of illegal evictions was 50 per cent higher than before Covid-19. Even this figure is likely to be a massive underestimate: many people who get illegally evicted may not report it, or even know what happened to them was illegal.

Despite Beata’s eviction being illegal, the police’s handling of the case was woefully inadequate. When Beata called them as her belongings were being taken away, they told her it was a civil matter – something the police don’t get involved in. That was untrue; while the police don’t prosecute illegal evictions they are legally bound to intervene in favour of the tenant to keep them in their home. “By not reacting, the police consented to such behaviour,” says Beata. “They showed me that you cannot rely on them and that there is no justice.”

Two years since the government pledged to end Section 21 evictions. Not only have they failed to institute the legislation, but enabled landlords to conduct illegal evictions in the middle of a public health crises, eschewing any accountability and risking renters livelihoods.

Just two per cent of recorded illegal evictions led to any kind of prosecution against the landlord. “The police just don’t have any understanding of housing law at all,” says John-Luke Bolton, an illegal eviction caseworker for housing charity Safer Renting. “They often just side with the landlord because they’re the property owner. That’s another huge issue.” It’s a recurring theme across John-Luke’s casework and everyone Huck spoke to for this piece. John-Luke tells me there are instances of police arriving and actively aiding the landlord to evict someone illegally.

Often, illegal evictions are just the final blow in an already painful journey. The problems started almost immediately after moving in for Andrea, whose name has been changed to protect her anonymity. Just a month after an agency offered her and her two children into a flat in East London the heating broke. The landlord said they couldn’t afford to fix it. Then a plug exploded, starting a small fire. Andrea moved to her mother’s home to protect the children from more explosions, and the landlord kept promising to fix the problem but didn’t deliver. Another plug exploded, still nothing was fixed. It took outside intervention from a housing licensing officer (council officers who monitor the quality of rented accommodation) to get anything resolved.

Over months, the problems kept occurring – and then on 26 July 2021, water flooded the entire flat up to their knees. “The landlord told us you can’t stay there, you just need to leave and then we will see what we will do,” she explains. Her landlord said to ask the council for help. Andrea obliged, but when she left to stay with her mother, unbeknownst to her, the landlord was trying to have her evicted.

“The landlord told the council that I’d left the house, but I was telling [the council] my possessions were still there and I’d only left because the landlord told me to leave,” she tells Huck. “We were without any clothes. We didn’t have enough money or half of my documents, my car, everything was gone.” Thanks to interventions from lawyers and activists in the Safer Renting team, she has secured accommodation, but is still fighting her landlord who is refusing to return her deposit, and has repeatedly threatened her, saying she stole from them in the months since the illegal eviction.

As with so many of the issues that have exploded during the pandemic, its roots can be traced back to years before. In the decade after the Conservatives first took power and enacted brutal rounds of austerity, council spending on local services has sunk by 21 per cent. And one of the many services that weren’t ring-fenced in most council council budgets were the kind of tenancy or housing officers that investigate and prosecute criminal landlords and fight illegal evictions.

“That whole aspect of enforcing landlord tenant law pretty much just got forgotten about,” John-Luke explains. What might be the most tragic thing about illegal evictions is that they’re just the tip of a scarily large iceberg. According to Shelter, 45 per cent of England’s private renters – roughly equivalent to 3.7 million people – have been the victim of some form of illegal behaviour from a landlord or letting agent.

It’s emblematic of the complete power imbalance between tenants and landlords. “The way they act, it’s like they’re saying: ‘I’m the landlord, I can do whatever I want’,” explains Andrea. “They were just there telling me I had to leave, and what am I going to do?”

And these stories are playing out across the country. John-Luke shares with me the countless cases of illegal evictions he’s been working on recently. In one case, a mother was illegally evicted and left homeless when she complained to a landlord about the impact the flat was having on her son’s health. In another, a man was beaten up by a landlord, who then proceeded to illegally evict him and threw away all his possessions. With his passport and all other forms of IDs now gone, he was unable to claim for benefits or get assistance from the council for homeless accommodation. He was left on the street.

Left abandoned in a bureaucratic nightmare, unsupported by councils or the police, for Beata, the future is now uncertain. She is temporarily staying at a friend’s home with her daughter, but will be forced to find an alternative soon. All the council has offered is a £45 per night hostel, something that would end up costing her £1300 a month – almost three times as much as she was spending at her original home.

“People are being left in a difficult, sometimes incomprehensible situation, without help,” she says. “And they can only count on themselves.”

Linkedin
RELATED ARTICLES
OTHER ARTICLES
A new film from Berghaus traces the story of Adam Raja, who left behind a turbulent upbringing to discover the healing power of climbing.
A group of aid workers face prison for helping to save people fleeing their homes at sea. If they are charged, it will have a chilling effect on humanitarian efforts.
A new law change is enabling Britain’s donor-conceived children to know the truth about their origins – but campaigners say the fertility industry must do more to protect people.
Campaigners reflect on what the supreme court’s decision to allow buffer zones in NI means for the future of reproductive rights in the UK.
Activists and campaigners are fighting back against new laws that would seriously undermine the ability to take industrial action, calling it an attack on fundamental workers' rights.
David 'Dee' Delgado’s photo project is about honouring and uplifting the city of his youth, and a world rapidly disappearing under the relentless onslaught of gentrification.