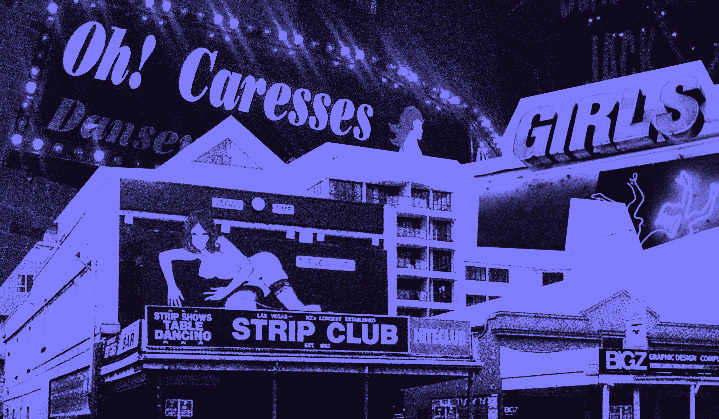 As Bristol prepares to become the biggest city in the country to ban lap-dancing clubs, adult entertainers are calling out the move‘s blatant whorephobia and the threats it‘ll pose to their safety and livelihoods.

As Bristol prepares to become the biggest city in the country to ban lap-dancing clubs, adult entertainers are calling out the move’s blatant whorephobia and the threats it’ll pose to their safety and livelihoods.

When Alice* – who has worked as a stripper in Bristol for over five years – reported a sexual assault to the police, the officer told her to explain why the violence was any different to her job as a sex worker. The case was never followed up. “This is what happens when we devalue [sex workers’] experiences, when we’re devalued as people,” she tells Huck.

Currently, Alice and her comrades in the Bristol Sex Workers’ Collective – many of whom are struggling financially due to the pandemic – are resisting a campaign to eradicate the city’s strip clubs. Like the police who didn’t take her sexual assault case seriously those trying to close her workplace are “belittling and trivialising” sex workers’ lives, she says.

Bristol’s two strip clubs are currently under threat of closure because groups including the Bristol Women’s Commission, Bristol Women’s Voice and the Fawcett Society – supported by local Labour MPs Kerry McCarthy and Thangam Debbonaire – are calling for a ‘nil cap’ on Sexual Entertainment Venue licenses in the city, effectively banning strip clubs. Campaigners claim that the two clubs – women-run local business, which employ over 100 women – are linked to violence against women and girls in the surrounding area. At a recent local council committee hearing, local Labour councillors voted in favour of a public consultation on the ‘nil cap’.

Bristol strippers at risk of losing their livelihoods and sex worker rights groups say the anti-strip club campaigns are driven by anti-sex work stigma, not facts. On a recent television interview on BBC Politics West, the host asked MP Kerry McCarthy: “Is it really an evidence thing… or isn’t it just sort of…  gut feeling?” In one of her responses, McCarthy admitted she thinks there’s “something very odd” about stripping.

The campaigners’ claim that strip clubs are linked to men’s violence is not supported by the evidence. “They just keep on ignoring the statistics and claiming they have evidence when they don’t,” says Chloe*, who has worked as a stripper for four years.

Police reports from 2018 to 2020 show sexual assault in licensed premises in Bristol is most common in the city’s biggest nightclubs – not the strip clubs. And although strip clubs have been closed for over a year due to the pandemic, there were still 476 sexual offences near the venues over this time. Overall, it is also the case that the great majority of violence against women happens in the home at the hands of intimate partners, not by strangers on the street.

Bristol council and Tom, are ignoring that research has been done into the city’s nightlife, w. most civvie nightclubs being far far worse than the strip clubs. pic.twitter.com/e8iABsUm3s

Rather than evidence, Chloe believes the campaign to eradicate strip clubs reflects “a really thinly veiled repulsion” for sex workers. “It’s not about women’s safety at all,” she says. “It’s about morals and what they personally find distasteful.”

Having communicated with the anti-strip club campaigners on Twitter and attempted to organise in-person meetings, Chloe says: “It’s very obvious that they look down on us… their replies have been very rude and snarky.” Campaigners have suggested that the strippers who’d lose their jobs could instead work as waitresses, she says – an opinion which she describes as “so out of touch”.

“They have no idea what our work is and refuse to discuss it with us,” says Amelie* of anti-strip club campaigners’ “ignorant” opinions. She adds that most “refuse to even step into a strip club”.

Alice says her experiences with the campaigners led her to believe that “they genuinely don’t like us… and sometimes it almost feels like they are disgusted by us”. At one local council hearing, she recalls, someone from a local women’s group “stood up to speak and said, ‘I’m afraid to give my name because of the people behind me’ – meaning us, [the sex workers]”.

“Quite often, it feels like an issue of class,” Alice says. Most of the anti-strip club campaigners are middle-class white women who “have access to so many more resources than we do,” she says, “and therefore can push their agendas a lot more easily”.

Much like the police telling women not to go out alone to avoid violence, Sarah from the sex worker campaign Labour4Decrim says the anti-strip club rhetoric is a form of “slut-shaming” and “victim-blaming”. What their claims come down to, she says, is “women [in strip clubs] get men het up, and then they go out and attack other women”.

The “utterly vile” suggestion that women are to blame for male violence is not only false, Sarah says, but “very, very offensive to sex workers – to basically say they’re complicit in causing men’s violence”. No matter how much campaigners deny this is their view, she says, “it’s hard to draw any other inference”. This attitude is “also letting men off the hook”. As she points out: “[As if] men can’t understand the difference between paying a stripper for a performance, and interacting with women outside of a strip club.”

“What [the campaigners] are basically saying,” explains Amelie, “is that men don’t have the capacity to understand the basic concept of consent, and can’t control their physical urges… They take [away] accountability and responsibility from men.”

But the campaigners “don’t want nuance,” says Sarah, “they just want a glossy headline, that looks good and looks like they’ve done something to help women”.

The campaigners’ whorephobia, says Sarah, is also revealed by their hypocrisy. Whilst there isn’t any evidence that strip clubs are linked to increased violence against women, there is evidence that football matches are – which campaigners are not trying to ban. “Somehow it’s always sex workers who are to blame,” she says.

Anti-strip club campaigners have at times positioned their views in relation to the recent killing of Sarah Everard. Amelie says this “instrumentalising [of Everard’s killing] to strengthen” their case against strip clubs is “outrageous”. At the same time, she says, “I don’t even understand why they [do it], because it clearly shows that… a violent man is a violent man… it doesn’t matter what women do.”

The campaigner’s framing of violence against women silences sex workers, says Amelie. “It’s infuriating [that they say] they’re fighting for women’s rights and women’s safety,” she says, when “our safety doesn’t matter to them, because we don’t fit their criteria for morality”.

If strip clubs are banned, workers will likely face increased violence. “I think they don’t understand that the question isn’t ‘Should we ban strip clubs?’,” says Amelie. “The question is: ‘Should we close strip club venues which are regulated, safe and licenced… and push strippers to work underground in unsafe, unlicensed venues?’”

Sex work also provides many women with an income that allows them to leave abusive partners. “You’re actually increasing women’s reliance on [these] partners if you’re going to throw them out of work,” says Sarah.

Bristol’s strippers feel often safer at work than they do in other spaces, such as nightclubs. “There’s a bigger element of consent in strip clubs than there is in wider society,” says Chloe. The campaigners “don’t understand that when you come into a club, the power imbalance changes,” she says. According to Chloe, while detractors believe “men come into strip clubs and… do whatever they want,” in fact, in the club – which is highly regulated – she chooses which men she speaks to and performs for, and can remove men from the space if they make her feel uncomfortable.

Rather than “protection” says Alice, sex workers and women, in general, need to “be able to speak about the issues which affect us and… to be present in policymaking, so that decisions [about women’s safety] can be ones that we really need”.

Anti-sex work lobbying “doesn’t understand that the sex industry is a reflection of the patriarchy, not causing the patriarchy,” says Sarah from Labour4Decrim. “The demand from women is to earn money; to earn money in a way that suits them and meets their needs – whether that be to have a wage they can live off, or to work around caring responsibilities or education.”

Closing the strip clubs would “close off a lot of opportunities for me to improve my life,” says Chloe. Working as a stripper allows her to afford to study at university, and is also better for her mental health than other jobs she has had. Due to strip clubs being closed during the pandemic, Chloe has been doing “minimum wage agency work,” which she says – unlike stripping – has entailed long hours and stress.

“Removing strip clubs is not going to remove the patriarchy,” says Chloe, “it just puts us at more of a disadvantage.” Along with her fellow workers – and with the support of the trade union United Sex workers – Chloe is fighting for “rights not removal”. This includes the struggle for better working conditions in strip clubs, as well as the battle for safety and rights via decriminalisation for the sex industry as a whole. This past week has been an especially critical moment for sex workers’ collective organising, as Labour MP Diana Johnson attempts to add an amendment to the Police, Crime, Sentencing and Courts Bill that evidence shows would put sex workers’ lives at risk. (The bill has now been delayed and is not expected to return to the Commons until summer).

Women will not be protected by closing their workplaces and dealing with “bad men”, says Sarah, but by addressing systemic poverty and state violence that limit women’s freedom. In a country where only 1.5 per cent of rape cases get some form of justice – a statistic which is even lower for sex workers – feminists interested in women’s safety should be defending women’s financial security and resisting sexist policing. Strip clubs, which allow many women to survive under capitalism, may reflect the patriarchy, Sarah says, but “the police are [enforcing it]”.

Linkedin
RELATED ARTICLES
OTHER ARTICLES
While the popular news aggregation service has been kicked off Twitter, its demise does not spell the end of digestible misinformation.
Hundreds gathered together to protest the policing bill by making as much of a racket as possible.
Jermain Cikic reflects on his experience of visiting the island of Samos, Greece, in the summer of 2021.
Those set to be impacted by the governments ’undemocratic’ bill explain why it risks silencing them.
In 1984, Martin Shakeshaft set out to document the miner’s strike as it really happened, using his photography as a tool for activism.
The musician, DJ and founder of Monika Enterprise reflects on a career defined by revolution and rule-breaking.