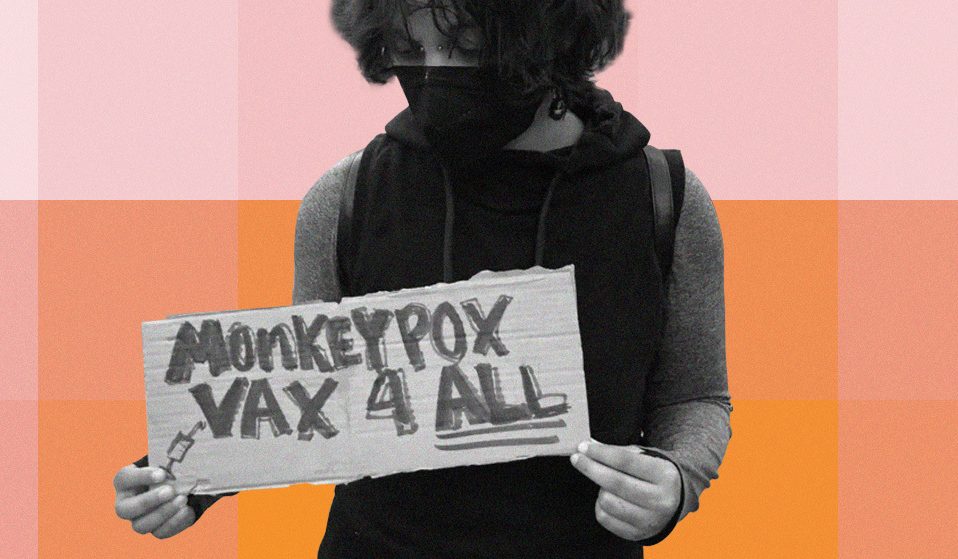 With the UK now set to run out of vaccines, people working in the sex industry – particularly outside of major cities – have been left especially vulnerable, reports Brit Dawson.

With the UK now set to run out of vaccines, people working in the sex industry – particularly outside of major cities – have been left especially vulnerable, reports Brit Dawson.

Martin*, a 38-year-old escort from the Midlands, has noticed that his earnings have been slowly dwindling in recent weeks. Looking back at his calendar – on which he documents his pay – he starts to read out the decreasing numbers. For comparison, he first lists his weekly earnings in June 2021, most of which top £1,000, then he moves on to the last month. £480, £540, £560. “It seems to have gone down a lot,” he reflects.

Most of Martin’s clients are married men, so, he says, he has a pretty clear idea of what’s happening. “They’re worried that they’re going to get monkeypox off me and pass it onto their wives.” he says. “That’s exactly why I’m losing bookings.”

Two weeks ago, monkeypox was declared a global health emergency by the World Health Organisation (WHO) – the same label given to the Covid-19 pandemic in 2020. A viral zoonotic disease, monkeypox can result in flu-like symptoms, including a fever, headaches, body aches, and chills. It can also cause a rash that looks like pimples or blisters, which scab before healing, and can appear on the face and other parts of the body, as well as the genitals and anus. It’s usually mild, and most people recover in two to four weeks.

At the time of writing, according to the WHO’s data, there have been over 28,000 global cases, with nearly 4,000 reported in the last seven days. So far, 11 people have died. The UK reported its first cases on 6 May, and now has the fourth highest number of cases at 2,859 (behind the US, Spain, and Germany), but hasn’t reported any deaths.

As monkeypox is typically transmitted via close physical contact – most frequently via sex – those who work in the sex industry are particularly at risk. “There’s a lot of concern [in the community],” says Polly, a spokesperson for SWARM, a sex work activist collective. “Many sex workers are worried about catching it, particularly those who work having group sex in premises like saunas or sex clubs. The isolation period is so long, and almost no sex worker can afford to take that much time off work.”

Although monkeypox can affect anyone, the infection currently appears to be most common among gay and bisexual men who have sex with men, with statistics suggesting this demographic makes up 98 per cent of global cases. This means Martin, and other men and non-binary sex workers who have sex with men, are an especially high-risk group. “It’s gotten very worrying,” admits Martin, who says he’s eager to get his monkeypox vaccine as soon as possible. “I want to be able to put it down on my profile because it’ll settle the minds of clients.”

In the UK, gay, bisexual, and non-binary people who have sex with men are being prioritised for the Imvanex vaccine, the same one used for smallpox. (The government website does not mention sex workers, potentially excluding women in the industry.) Even though the UK procured 100,000 vaccines, it has recently been reported that this supply is set to run out, with only around 5000 doses left. Despite being a two-dose treatment, the NHS is so far offering just one dose to those at the highest risk.

“The vaccine rollout feels confusing for many of us,” says Polly. “We’re hearing that some clinics are currently limiting access to men who have sex with men only. However, some clinics are allowing access for female sex workers, which is great, but without clear guidance, it feels like a bit of a lottery.” But, Polly adds, SWARM fully supports all men in the wider MSM community getting access as soon as possible.

“We need to expand immunisation to all the at-risk groups,” says Paul Hunter, a medicine professor at the University of East Anglia, “including MSM who engage in [sex work], female sex workers, and certain healthcare workers in sexual health clinics. Until we start getting vaccine coverage at about 50 per cent of the at-risk groups, we’re unlikely to bring this pandemic to an end.” On a more positive note, Hunter adds, “vaccine efficacy is estimated to be about 85 per cent and protection is long-lasting”.

It’s promising, then, that there have been reports of men and non-binary people in London queuing for hours at hospitals to get the vaccine after word of availability spread across Twitter – something that’s been celebrated as “a rapid fire mobilisation in the queer community”.

At Guy’s getting the Monkeypox vaccine. Huge queue before 9am. Incredible to see another example of rapid fire mobilisation in the queer community!! While we’re often demonised for “spreading” something we will actually be studied in the future as examples…

Outside of the cities, however, it can sometimes be a different story. “I live in a very small town in the South Wales Valleys,” says 21-year-old OnlyFans creator Dafydd Jones. “I don’t even know if there’s a vaccination centre to receive the jab. Here, no one seems to talk about it, but I have friends in Manchester who say they’ve received text messages with information.”

McAulay has decided to take matters into his own hands: he travels to London regularly for work, and is booked to get vaccinated there this week. Still, he wants to use his 100,000-strong platforms to raise awareness in Edinburgh. “I’m going to contact local health clinics to see if they can send me some location information and times offered – if they are offered – so I can [publicise them on Twitter],” he says.

I am livid that every queer man is being offered the vaccine in London while those considered at risk outside are being left in the Dark.

Manchester has a dense queer population, and *300* vaccines over the past few weeks, with Manchester Pride coming up, is criminal. https://t.co/gm8FQDatgl

Despite feeling isolated from information in the midlands, Lewis has managed to have his vaccine, thanks to his known status as a queer male sex worker. But even with this, Lewis – who moved away from selling sex during the pandemic – has decided not to return to in-person work just yet. “I was gearing up to start again, but this has affected it,” he tells me. “There’s a lot of confusion and worry [in the sex work community], and has been no real explanation about what’s going on, how to get treated, or how serious it is.”

Earnings aside, the monkeypox outbreak is heightening anxiety in an industry still recovering from the last pandemic. “I feel anxious because I have a lack of information on it,” says Jones. “[Content creators] have to do their own research, which makes me feel like we don’t always get the right information on it, therefore putting ourselves more at risk.”

Sex workers like Silver Steele – a Texas-based porn star who documented his journey with monkeypox on Twitter – and organisations like SWARM have stepped up to disseminate information online, with the latter creating a thorough guide specifically for sex workers. “Most of the information we’ve had [about monkeypox] has come from our own research, or from conversations with the NHS and WHO,” Polly tells me. “We haven’t been provided with any specific info about how it relates to sex work. We know the NHS is stretched thinly – and we have some links with people there who are doing their best to get us access and info – but it does usually fall on the community to provide support and resources to each other, as it did with Covid.”

Many sex workers are also exasperated by having yet another hindrance to their work. “It’s just one thing after another,” says Martin. “First of all Covid, then the crisis with the fuel – meaning clients are wary about travelling over to me because of the cost – and then, to cap it all off, the heating and electricity [price hikes, which have depleted clients’ disposable incomes]. It really has been terrible.”

*Name has been changed

Linkedin
RELATED ARTICLES
OTHER ARTICLES
Ahead of the release of their first collaborative album, the producer and rapper talk psychedelics and the state of UK hip hop.
A new project is documenting formerly incarcerated people as they transition back into civilian life.
Rogue landlords are exploiting young and inexperienced renters and leaving them in mental and financial turmoil, reports Niall Hignett.
In his 2008 series, the photographer pictured himself as Angela Davis, Martin Luther King Jr., Malcolm X, and other prominent figures.
Rhiannon Adam spent three months capturing an ageing society wracked by division, isolation, and the aftermath of scandal.
The idea that a younger generation is abandoning work has become a popular narrative online, but it doesn’t necessarily reflect reality.