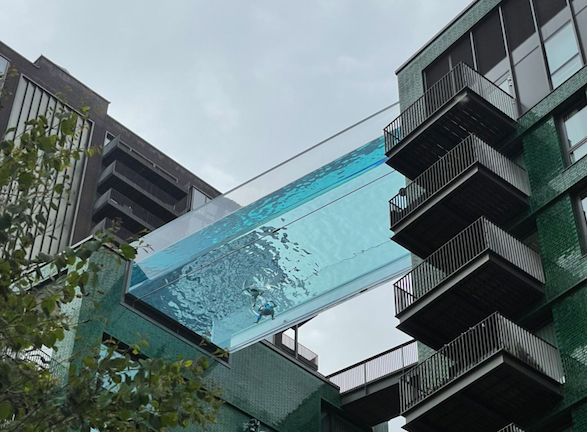 Photos of the pool at Nine Elms elicited controversy when they were widely shared last week. It sheds light on a history of Conservative politicians prioritising the private gain of developers before public good, writes Labour Councillor for Queenstown, Aydin Dikerdem.

Don’t get hung up on the skypool, it’s the wider Nine Elms development model that is the problem. That was my pitch as images of the glass box suspended between two towers spread across social media last week. As the local councillor for the area, people’s curiosity offered an opportunity to draw light on one of the great housing scandals of our generation.

As a huge swathe of Zone two riverside brownfield land, most notably known for the iconic but derelict Battersea Power Station, Nine Elms was a prime site for a comprehensive house building programme and urban regeneration. This was a once in a lifetime opportunity to help tackle the housing crisis that Londoners know all to well; social housing waiting lists decades-long, tens of thousands statutory homeless and in temporary accommodation across the city, and precarious renters losing half their salaries to keep a roof over their head. Yet it is a scheme that will produce abnormally low affordable housing.

To understand Nine Elms, you have to understand the role of Wandsworth Conservative Council, the then-Mayor Boris Johnson and David Cameron’s new coalition government. There are two major decisions that were taken at the time that put the private interests of property developers before the public good. The first was when Wandsworth Tory Council decided to try and keep the collapsing Irish property company Treasury Holdings afloat after it bought the Battersea Power Station site in 2006. Treasury Holdings was deeply tied to the Irish property boom that burst with the 2008 financial crash.

At their Battersea site, the implications of the crash meant the land valuation had collapsed, and so in order to keep the developer going, Wandsworth Council used the pre-crash land valuation when they submitted their planning application, which was nearly five times higher than what the land was worth at the time. This meant the original affordable housing obligations of 50 per cent (and at the time, this really meant affordable), was watered down to 15 per cent in order for the scheme to remain profitable to the developer and so they wouldn’t pull out. This ultimately failed, and Treasury Holdings went bankrupt anyway, selling the site to the current owners, a Malaysian consortium, which inherited the planning permission of 15 per cent affordable provision. At its most basic, Wandsworth Council allowed its residents to suffer for an investment risk taken by a private developer.

The second decision involved the Northern Line extension. One of the primary demands of developers for the regeneration area was that it needed a new tube line. The Power Station is a 15-minute walk from Vauxhall, yet the new tube line was thought to entice investment. Again, after the financial crash, some people worried that house building and development would grind to a halt, and developers needed incentives to take a gamble on Nine Elms. Of course, the opposite was true: this was prime Zone two real estate and millions and millions of pounds in quantitative easing during the crisis meant there was lots of cash looking for a home in assets, given interest rates were at almost zero per cent.

Conservative Wandsworth Council decided to set an artificially low affordable housing requirement on the entire Nine Elms Opportunity Area to entice developers. Where it would normally require 33 to 40 per cent affordable housing on any given scheme, for Nine Elms, this was lowered to 14 per cent. This was so the Section 106 money taxed off the developers (usually spent on affordable homes) would instead go into the tube extension.

Of course, the tube extension itself raised the value and property prices for the developers, so in effect, it was taking away with one hand, and giving back with another – with the loss being the desperately needed affordable homes for Londoners. Ostensibly then, this was a huge Wandsworth taxpayer subsidy to improve house prices in a luxury development to pay for a piece of infrastructure Wandsworth residents have no public ownership over, and unlike council housing, will generate no income for the Council.

In 2012, David Cameron went on to change the definition of affordable housing to mean upwards of 80 per cent market rate. In Nine Elms, this has meant the number of social homes is well below the already low 14 per cent requirement. He also enshrined into law that developers were entitled to 20 per cent profits for a scheme to be viable. This came in handy for the Power Station in 2017 when their construction works proved more complicated than they had thought, and they could reduce their promised affordable housing quota even further to nine per cent, to protect their projected £1.8 billion in profit. Foxtons lists the average rental price in Nine Elms at £691 per week, with average property values being £918,414.

If you look out across the river from Nine Elms you’ll see the purpose-built Churchill Gardens estate. It was built in the post-war period to house 5,000 people, in high-quality riverfront council housing. It’s a relic to a time when housing was seen as a public good, not a financial asset. In 21st century London, we have gone a long way backwards compared to then.

Linkedin
RELATED ARTICLES
OTHER ARTICLES
The past five years have seen a staggering increase in foodbank usage across the UK. Now, staff fear things are set to get much worse.
Photographer Matthew Brookes recalls following a group of young people in Venice Beach living in search of the perfect wave.
Whether it's partygate, the climate crisis or the spiralling cost of living, the fightback begins on the picket lines writes Tommy Vickerstaff
Proposals to introduce a minimum GCSE threshold for student loans will disproportionately affect those from marginalised backgrounds.
A new edition of a seminal book brings together iconic images of the band onstage in their full glory and backstage in moments of unguarded camaraderie.
Freddie Miller’s new series of photographs investigates who today’s trainspotters are and what drives their unfettered enthusiasm.