News & Politics / The students fighting to keep cops off campus 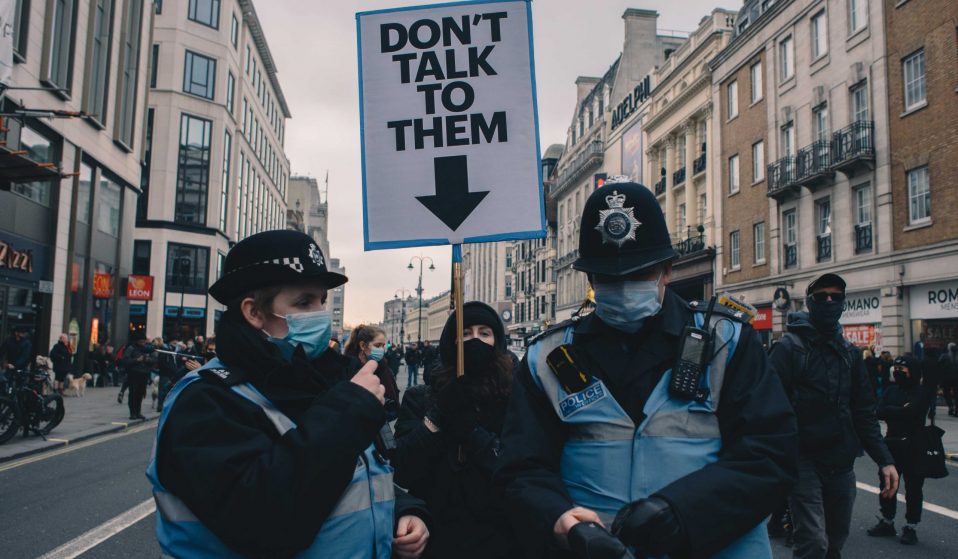 Despite the easing of Covid-19 restrictions, the issue of over-policing on university campuses remains.

Lockdown rules gave cops a justification for increasing their presence, but the easing of restrictions hasn’t stopped the issue of over-policing on university campuses.

In November 2020, two security guards pinned Zac Adan, a Black student at the University of Manchester (UoM), against a wall. A video capturing the incident, which later went viral, shows the two guards manhandling Adan and wrestling his student ID card from his hands.

In an interview with BBC News, Adan, a then first-year French and Linguistics student, said: “There was no conversation. They just pinned me up against the wall and said I looked like a drug dealer. Why? Because I am Black and wearing a hoodie?”. The guards were suspended. Later, they were acquitted of common assault for the alleged racial profiling.

This is one of many incidents of harassment by police and campus security towards UoM students that are described in a report released in March 2021 put together by the Network for Police Monitoring and UoM’s “Cops Off Campus” campaign. The report details how, during the Autumn 2020 term, the police and campus security used Covid-19 restrictions as a justification to increase their presence on campus. This included sending riot vans to patrol campus on weekends to enter student flats without warning or consent from occupants under the pretext of noise complaints.

Police evidence gathers appear to be filming students who are going about their lawful business @rentstrikeUoM. Students are being targeted by large groups of police having being filmed. Keep masks on, stay safe. @netpol pic.twitter.com/qe7sAzJKCQ

In the report, one anonymous student disclosed their experience of eight police officers storming into their shared flat at around midnight and demanding details. “We tried to be co-operative from the beginning but they were really rude,” they said. “At one point, two police men started shouting at my flatmate because they didn’t believe she was giving the right details (even though she was) and caused her to have an anxiety attack once they’d left.” Police have no legal basis to demand personal details from students who have not broken any laws, and yet the report shows the practice – which the report’s authors deemed “nothing more than an intimidation tactic” – was widespread during lockdown.

V, 20, who uses an alias when speaking about counter-police activism, is part of a group of students who set up a Cops Off Campus campaign in response to this consistent pattern of over-policing at UoM. A group of around 25 student activists involved in the campaign were trained as legal observers by the Green & Black Cross, an independent grassroots project that supports social-justice struggles across the UK. Legal observers are taught what the police legally can and cannot do, and can act as witnesses against officers in court.

By the time Cops Off Campus campaigners started patrolling campus as legal observers, the UK had entered its third lockdown, which meant they couldn’t go inside halls and had to perform their role as best they could from outside. “It was complicated, but in the end, we managed to patrol campus on Friday and Saturday nights, doing shifts from 10pm to 2am,” V recalls. Cops Off Campus also shared phone numbers on social media that students could call if police were entering and searching their flats. After a few weeks, V noticed a pattern in the flats that police tended to target: those with “BLM” or “ACAB” in post-it notes on the windows.

This anecdote is especially disturbing considering that Black people in Manchester are eight times more likely to be stopped and searched than white people. For V, this blatant disconnect between the university making anti-racism pledges in Summer 2020 and then sanctioning excessive police presence affecting mostly Black students only a few months later is proof of just how hollow these pledges were.

Neha, 24, a PhD student in English at the University of Exeter and vocal critic of police presence on campus, agrees. “This institutional culture of hypocrisy is driven primarily by the marketisation of higher education. Foucault and Marx sell, anti-racism sells, an internationalist outlook sells,” she says. “But at the same time, the university needs to maintain control, and police the racial and class integration of the student body.”

A spokesperson for UoM said: “We are proud of our security staff who work around the clock to ensure our campus remains a safe space for the entire university community. A police presence is sometimes necessary for this and is always only for the safety and wellbeing of our staff and students, which remains our priority. The University is always open to an honest and transparent dialogue with staff and students about how to further enhance the safety of our campus.”

As Covid restrictions were progressively relaxed, police patrols became rarer on the UoM campus. But the issue of over-policing on university campuses doesn’t end there.

In January, the Sheffield Hallam University (SHU) rent strike group posted on Twitter pictures of posters plastered on student halls, which stated: “POLICE ON PATROL ACROSS CAMPUS AND HERE FOR YOUR SAFETY”. SHU students had faced similar issues to University of Manchester students during lockdown early last year with police entering flats without warrants. Now, even in the absence of Covid restrictions, the posters indicated that they were still being watched closely.

“The posters have since been taken down, but there’s absolutely nothing stopping that happening again,” says Zac Larkham, 20, a SHU student and rent strike activist. Zac is currently working on distributing “Know Your Rights” leaflets to students, which detail what police are legally allowed to do, and how to interact with them. SHU did not respond to Huck’s request for comment.

Meanwhile, the University of Salford and the University of Central Lancashire have recently entered a partnership with Greater Manchester Police to provide degrees to officers, leading to a massive influx of police officers on campus since the start of the 2021/2022 academic year. In response, Salford student Zara Manoehoetoe, 30, has been offering Know Your Rights training to her peers, which can be attended for free online and in person. The sessions include information about what the police are allowed to do, how to carry yourself during a police interaction, how to avoid escalation, and how to intervene as a bystander if you witness a stop and search. One of the sessions, which was aimed at women students and people from marginalised genders, even included a self-defence class. “I think Sarah Everard’s brutal murder made a lot of people very conscious that danger can come from those who are supposed to provide safety,” Zara says.

The University actively encourages all students to share their concerns and this is done through staff and student liaison groups, discussions with personal tutors and the confidential university Ask Us service. We also work closely with the student union to resolve any issues that have been raised.”

Clearly, there is a continued need for campaigns raising awareness of and providing strategies to resist potential abuses of power by the police on university campuses. But even though Know Your Rights leaflets and legal observer training can ward off police harassment to a certain extent, the problem of campus security remains.

Zac from SHU was assaulted last April by a campus security guard during an occupation to protest the university’s treatment of staff and students during the pandemic. Despite the incident causing outrage across the university, Zac says the guard still has a job. “There needs to be better ways to hold security staff to account,” he adds. At the UoM, V says that Cops Off Campus have been trying to push for university security to be replaced with an abolitionist alternative that is trained in sexual abuse response and drug safety.

For Zac, Neha, Zara, V and many other students fighting to keep police off campus, better reporting systems for sexual assault and a harm reduction approach towards drug use – which use other resources than the police and security staff – are the way forward. “[Involving the police] allows universities to ignore the environment that caused these incidents and brush away any notion of responsibility,” Neha says.

Zara also believes that this student movement against excessive police presence can bring attention to the wider problem of over-policing that has been plaguing marginalised communities for decades. “It’s great to see these conversations taking place, because a lot of this work has always been going on,” she says. Zara works alongside other organisations like Sisters Uncut and the Northern Police Monitoring Project to deliver Know Your Rights training across Manchester.

V agrees, and would like to see student activists using what they have learned about how to resist police presence on campus to help people within their local community. “I’ve gone from living in student halls to living in a community that is majority working class people of colour, and there’s been a number of times that I’ve been on my way to class and had to stop and legal observe because of some sort of incident,” he says.

“There’s an opportunity to integrate the student community and the local community, and have a united front against police brutality,” V adds. “Queer liberation, Black liberation, feminist liberation, I think all of those fights are abolitionist at their core.” As students continue to learn more about the threat of police impunity and find ways to counteract it, calls to defund or abolish the police will only continue to grow louder.

Linkedin
RELATED ARTICLES
OTHER ARTICLES
After news broke last week around an expected reversal of the 1973 landmark law that made abortion legal in the US, protestors gathered in the UK in support of American women.
The failure to hold landlords to account is denying tenants their basic dignity, writes Bella Saltiel.
Over the weekend, London locals came together to resist a pre-planned police raid targeting delivery drivers.
In the latest OFFF Dispatch, the enigmatic designer dives into his process, connecting the dots between his unique and varied creative output.
The revered showbiz chronicler recalls his journalistic beginnings, documenting subcultural scraps in the ’80s.
Following the release of his latest album God Don’t Make Mistakes, the rapper talks horror villains, police brutality and being unafraid to show his vulnerable side.