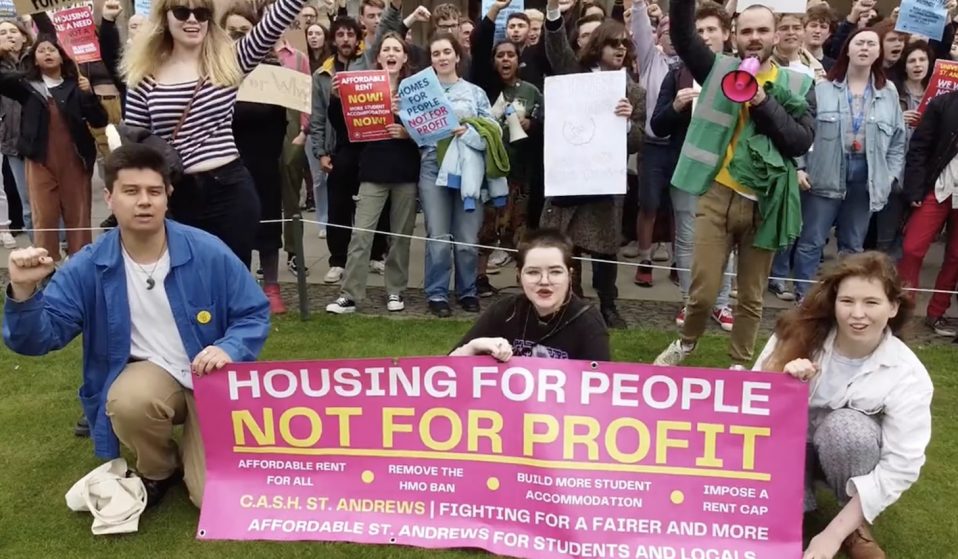 Across the UK students are being denied accommodation by their universities, leaving them in precarious living situations.

Across the UK students are being denied accommodation by their universities, leaving them in precarious living situations – from rough sleeping, to sofa surfing and Airbnb, reports Siân Bradley.

A reportedly rising number of university students are facing an impossible choice of being homeless or dropping out as they battle for flats during a cost of living crisis and oversubscribed universities admit they accepted more students than they have room to house. This is forcing students into hostels or hotels while they study, commuting from cities outside of their university, or asking if they can pitch tents on campus. The lucky ones are paying through the nose for often mediocre private rentals that they took out of desperation after months of fruitless searching.

These students have been taking matters into their own hands. At The University of St Andrews, for example, which has just been named the top university in the UK, the student-led Campaign for Affordable Housing (CASH) has been protesting, petitioning and collecting damning testimonies in response to the hundreds of students left homeless due to what they claim are “direct actions by university leadership”. A spokesperson for the University of St Andrews said they “do not currently have a waiting list for University accommodation”, and that the university has spaces available in University accommodation in St Andrews, and in Dundee.

A similar situation has been brewing at The University of Glasgow, which advised students to defer or drop out if they didn’t have accommodation confirmed. “Their first narrative was ‘Don’t come to Glasgow because we don’t have anywhere to put you,’” says second-year business management and politics student Krishen Chadwick Patel, referencing an email that Huck has seen that was sent to students in September advising them to drop out and defer. Patel had no place to live, but he refused to drop out. Instead, he and his friends Lois Bornat, Neve Mclean and Saffron Everitt set up an email account and put posters up around campus urging unhoused students to get in touch. They received 70 replies in one week.

“On the back of that, we submitted a mass formal complaint to the university, detailing people’s stories and what we wanted them to do,” he says. The university agreed to provide emergency accommodation to anyone who needed it. But, Patel says, it was too late. The damage had already been done. Without university accommodation, some were left homeless. On the day Patel talks to Huck, he’d received his 100th email.

Universities don’t monitor how many of their students are currently or at risk of homelessness, and snapshot surveys from charities and student bodies can only capture part of the reality. Students experiencing ‘hidden homelessness’ – so those who are sofa surfing, staying in hotels or hostels – may not consider themselves homeless at all. But the numbers available still tell a grim story. Student Beans’s latest Housing Insecurity Report found that 11% of the 3,000 students they surveyed are facing homelessness, primarily due to the lack of affordable housing. The majority (49%) are sleeping on a friend’s sofa, like Patel first chose to. A survey by NUS Scotland presented similar findings, showing that 12 per cent of students have experienced (self-defined) homelessness since the beginning of their studies, and two per cent currently are. The rate was highest amongst estranged, disabled, mature and careleaver students.

A study by the bank Nationwide offered yet more stark figures: two-thirds of students are struggling to afford their rent and one in seven fear homelessness within the next six months. A recent report from the Higher Education Policy Institute (Hepi), warned of an impending student homelessness crisis. Now that term time has started, we have seen that prediction come to fruition. Report author Greg Hurst called on universities to do more to track and prevent student homelessness, and also to question whether they need to play a wider role in ending of homelessness, which tends to be higher in university cities and towns. In the Hepi report, Hurst urged universities to provide additional support to disadvantaged students, a record number of which applied to university this year and who are most at risk of homelessness.

While universities have failed to grasp the scale of the crisis, students like Patel have stepped up. He “fell in” to organising when he became one of the hidden homeless; for the last month, he’s been living in a hotel paid for by the university. Before that, he spent over two weeks sofa-surfing in his friend’s empty room and slept on the hallway floor of his friend’s flat.

He’s viewed over 50 flats since April, without luck. Rents and demand are stratospherically high, meaning students are pulled into bidding wars to secure a tenancy. In these wars, the wealthiest will always win.

Rent for halls of residence has risen by 60 per cent over the last decade, at an average of £7,347 per year, according to the Unipol and National Union of Students (NUS) Accommodation Cost Survey 2021. CASH found that the average maintenance loan (£4750) afforded to students doesn’t cover even the cheapest halls of residence, while the average price for a university room hall, according to data collected by CASH and seen by Huck, is £7,523.89.

“If you widen [the university population] to people who traditionally don’t go to university, that’s going to pull in people who face homelessness,” says Patrick Mulrenan, a lecturer in social work, youth and community at London Metropolitan University. At London Met University, two-thirds of students are ethnic minorities and from lower socio-economic backgrounds, which puts them more at risk of homelessness. Mulrenan led research into students facing homeless at London Met and found they were ashamed to tell anyone out of embarrassment that they weren’t able to “stand on their own two feet” as a “role model” to their children and, of course, struggling to keep on top of their studies or hold it together emotionally.

For international students, there are often additional challenges when it comes to securing accommodations, making them vulnerable to homelessness. 30-year-old Bunmi moved to Birmingham from Nigeria to study for a master’s degree in Business Administration at Birmingham City University. She was accepted onto the course but the university didn’t have anywhere to house her. “I tried to get one of the student accommodations, but those were already filled up.” She spoke to the university who, according to Bunmi, explained that there “wasn’t a lot they could do, because there were a lot of students in this situation”.

A spokesperson for Birmingham City University said that all first year students in September 2022 were guaranteed a room in University-managed accommodation, if they applied in time. They say they review their available accommodation each year, “increasing space where needed, to ensure we are able to meet the demand for rooms as student numbers grow.”

Bunmi looked at the private rental market. But for international students, there are a lot of hurdles to cross. Bunmi was told she needed proof you have a right to live or work in the UK, but she was still in Nigeria. By the time she moved here, Bunmi was told she needed a guarantor, and five weeks worth of rent for a deposit. She didn’t know anybody who could act as a UK based reference, so by the time she sorted someone, she’d missed out on the property.

Desperate, Bunmi had to check into an Air bnb, which she paid £25 a night for. It took a year of searching before she signed for a room in Birmingham – a “tiny” one without a window, costing £475 a month.

As a lot of Bunmi’s friends are coming from Nigeria to study in the UK, she’s let some friends stay with her so they don’t have to go through what she did. “It’s getting worse. It’s really hard for them to secure accommodation,” she says. Bunmi is in a new, nicer room, but has to work shifts at her customer service job to afford living expenses. She’s hoping that in January, a space will free up in student accommodation. “It was already hard leaving my country for a new palace. And then having to go to school, try to make time for viewings…It definitely made studying harder. It was crazy, juggling all of those things together.”

Students need proper support if universities and governments are serious about making university accessible and attainable for all. For every student who manages to push back against bureaucracy and gain a small victory, there are scores more struggling to survive in untenable living situations.

“It kind of wears you away,” says Patel. “The longer it goes on you think, is this ever actually going to end? Will I be sofa surfing all year?” Whether or not Patel finds a flat, he won’t stop the fight to ensure history won’t repeat itself. “If the university is taking my £9,000 a year, they have a duty of care to tell us what they plan to do when they inevitably have hundreds of homeless students again next year.”

Linkedin
OTHER ARTICLES
Activists and campaigners are fighting back against new laws that would seriously undermine the ability to take industrial action, calling it an attack on fundamental workers' rights.
A new podcast is opening up the conversation between trans women and trans amorous men in the hope of building coalitions.
A new film from Berghaus traces the story of Adam Raja, who left behind a turbulent upbringing to discover the healing power of climbing.
Since 2007, Gideon Mendel has made 20 trips to document floods in 13 countries. The result is an alarming record of what has already been lost to the climate emergency.
Theo McInnes’s photos of the annual event provide an intriguing snapshot of contemporary Britain.
As she gears up for the release of her first book, the 24-year-old climate activist talks standing up to authority and building a more inclusive movement.