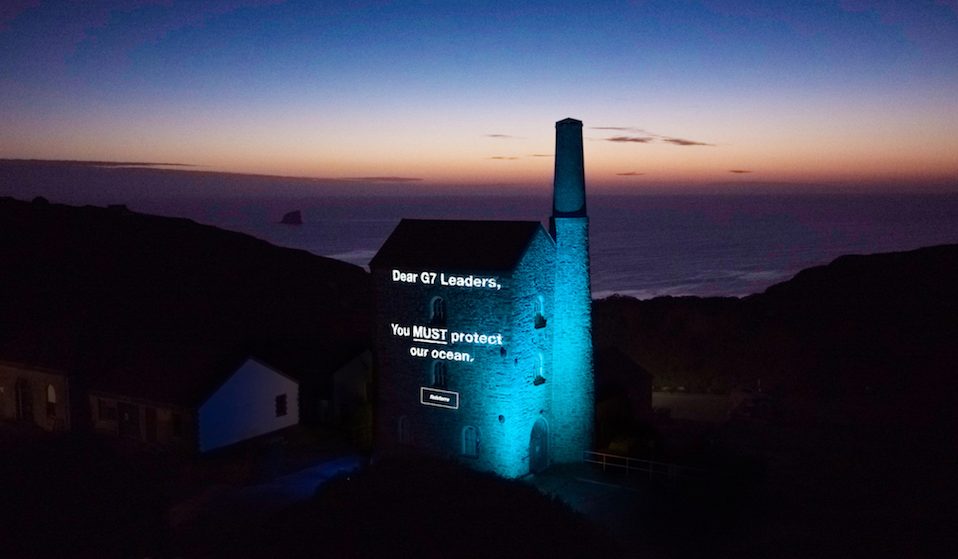 With ocean health declining rapidly, Finisterre is calling on world leaders to usher in a decade of global action and bringing activists together to inspire meaningful change.

With ocean health declining rapidly, Finisterre is calling on world leaders to usher in a decade of global action and bringing activists together to inspire meaningful change.

Up on the cliffs in St Agnes sits an old tin mine. Its chimney stands tall against the otherwise stark coastline that dips and swerves its way along the Atlantic Ocean. The workshops around the chimney house the surf brand, Finisterre.

The brand, which has become an international name, isn’t just concerned with making clothes. Sustainability and a desire to promote healthy oceans is embedded in their ethos. It’s that desire that drove founder Tom Kay to create and launch Sea7 – the first online ocean activist training camp. During the second wave of the pandemic, when the country was forced into lockdown, Tom and his team set about organising a day of workshops, talks and discussions to be broadcast from the company’s base in St Agnes to participants across the world.

The event took place on a windy, overcast Thursday in June as world leaders began to gather in Cornwall for the G7 summit, taking place just down the coast in St Ives. The summit set out to form a cohesive plan between some of the world’s biggest economies and powers for building back from the Coronavirus pandemic and to tackle the growing climate crisis as we barrel towards the IPCC’s 2030 deadline. Finisterre issued seven demands for the G7, centred around stopping damage to the ocean, protecting, managing and restoring the ocean and calling on world leaders to usher in a decade of global ocean action.

Ocean health has been declining rapidly over previous decades. In 2004, scientists counted 146 hypoxic zones (areas of such low oxygen concentration that animal life suffocates and dies) in the world’s oceans. By 2008, that number had jumped to 405. In 2017, in the Gulf of Mexico, oceanographers detected a deadzone nearly the size of New Jersey – the largest ever measured. Atop the ocean, giant patches of rubbish float, the largest being the great Pacific garbage patch which measures twice the size of Texas. Half the air we breathe comes from the ocean, so the shocking rates of pollution threaten our very existence on this planet.

Surfers have long been at the forefront of the fight to save our oceans. No more so than organisation Surfers Against Sewage (SAS), who were brought in by Tom and the team to help curate Sea7.

“Against Sewage has been doing ocean activism for thirty years, across a range of issues, so we were delighted to bring our experience to the table to help our friends at Finisterre,” said Hugo Tagholm, chief executive of SAS, speaking at the event. “My team here at SAS has been driving incredible impact and change, so it’s always good to share the stories of how activism happens. We proudly empower over 100,000 ocean activists annually, and reach millions with our campaigns, which has led to some big wins for the ocean. Sitting alongside other organisations to discuss and reflect on the ways to create change is always an inspiring exercise.”

For RJ, Seagrass is one of the key ways in fighting emissions and devastating climate change. “One of the real benefits of restoring seagrass meadows around our coasts is it’s going to catch that carbon, draw it down and bury it in the sediments and it does that at quite a rate as well. And then there’s so many other benefits, too. That’s one of the reasons why we’ve been trying to put seagrass front and centre for the G7. In fact, we’ve actually just created a small film, specifically for the G7.”

Nick Hounsfield, chair of Surf England and founder of The Wave surf centre in Bristol, was also on the north coast of Cornwall for the event. He tells Huck: “I was asked to come along because I’m heavily involved in trying to connect people to what we call ‘blue health’, which is the way that people can be hugely benefited from being next to water, in water, by waves, and really trying to create that connection between the water and also human health.”

For Nick, the opportunity that Sea7 presents is huge, enabling activists to reach a whole new network of people. And he’s determined to spread his message even further: “What we also need to make sure is that we’re not just talking to the same people all of the time. I think a lot of that will come down to trying to engage with people who maybe aren’t ocean-minded. So how can we infiltrate inner city school kids for example, and make them have a connection, and want to protect it.”

The event, which saw thousands sign up to watch hours of workshops, debates and specially commissioned films lives online, free to access for all. The hope, says Tom Kay, is that the resources created for and by the event will enable activists and “anyone on any part of their journey” to take action for the planet.

As the G7 came and went from Cornwall, eyes moved up the country to Glasgow. In the centre of the Scottish city stands a clock, ticking down the minutes to 2030 – the deadline for when the world needs to lower carbon emissions to avoid devastating rises in global temperature. It’s due to be in place for the next 5 months in the run-up to COP26, the international climate summit which will be held in the city.

For many who attended Sea7, COP26 is the focus for the next few months, with activists hoping to pressure global leaders into making meaningful change. With instances of extreme weather on the rise and the sea literally burning, the conversations, skills and toolkits crafted at the training camp will be invaluable in preventing disaster.

To get involved and learn how you can help protect the oceans, the Sea7 toolkit and all sessions are available for free online here.

Linkedin
RELATED ARTICLES
OTHER ARTICLES
The two-day long event returned to London this year, showcasing a spectacular parade, steel bands and Caribbean food.
The idea that a younger generation is abandoning work has become a popular narrative online, but it doesn’t necessarily reflect reality.
As the Scottish government announces a rent freeze, an activist with Living Rent who fought and won shares how they did it, and what must come next.
Rhiannon Adam spent three months capturing an ageing society wracked by division, isolation, and the aftermath of scandal.
Ahead of the release of their first collaborative album, the producer and rapper talk psychedelics and the state of UK hip hop.
Yesterday thousands gathered outside Buckingham Palace after news of the Queen’s death broke.