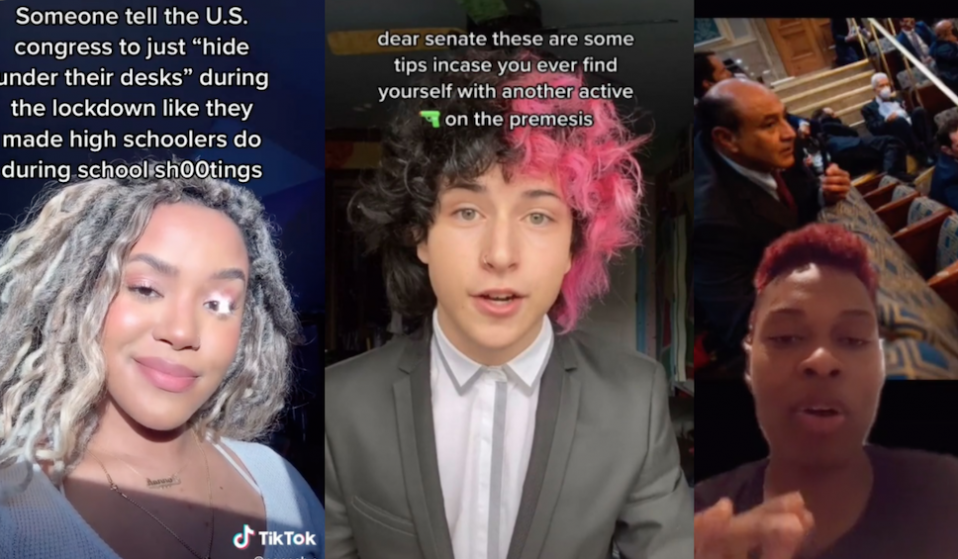 Young Americans say the Capitol riots mirrored school shootings. Now, TikTok is offering a space for them to process their trauma.

Young Americans say the Capitol riots mirrored school shootings. While many are doubtful it'll be a wake-up call for Congress, TikTok is offering a space for them to process their trauma.

Last week, the world looked on in disbelief as rioters attacked the Capitol – the first time the building has been breached since 1814. But for many young Americans, the images of representatives crouching under their seats and hiding behind walls reminded them of something much closer to home: the terror of lockdowns at school.

Waceline, a 26-year-old grad student from Orlando, was watching the chaos unfold on her phone from her bedroom. “My first thought was: thank god they’re not Black,” she tells Huck.

It was after seeing the representatives taking cover and being escorted out of the building that Waceline cast her mind back. “That’s such a familiar feeling, of being put in a place and told to keep heads down as the teacher anxiously watches the children and the doors and the windows,” she says.

Students in more than 95 per cent of American schools have been participating in school shooting drills for years, despite some experts deeming them ineffective, and claiming that they only serve to “terroris[e] students”. Waceline says she has experienced countless drills and “at least three” lockdowns where there was a genuine firearm threat.

She decided to make a TikTok that same day, now liked over 196,200 times, responding to the events at the Capitol. “I feel very bad for our Congressmen and women; this is a very terrifying situation,” Waceline says in the video. “But like, because of some of the policies they’ve passed – or failed to pass – this is just another random Tuesday at an American public school.”

Waceline certainly wasn’t the only one who noticed the similarities: there was a flurry of social media posts and dozens of TikTok videos calling out the parallels. Like many other TikTokers, James*, a high-school student, soundtracked his video on the topic to a Family Guy scene, blending dark humour with a serious message. “I wanted to make a point that in America, you can be impacted by life-threatening violence and hate whether you’re an official in a government building or a child in a classroom,” he tells Huck.

But even before the events at the Capitol, young people were using TikTok and other platforms to talk – and memeify – school shootings: last September, at the start of this academic year, there was a noticeable surge in videos satirising the topic. In one video from TikTok user @megaciota, a US student and a UK student are shown listening to M.I.A’s ‘Paper Planes’. When the gunshot refrain plays, the UK student is totally unphased, while the US student looks around, startled.

Videos like @megaciota’s are a reminder that gun violence and school shootings have long been considered a uniquely American epidemic. In 2019 alone, there was a reported 130 “gun incidents” on school grounds in the US. Gunfire on school grounds occurs most often at schools with a high proportion of students of colour – disproportionately affecting Black students.

“These issues are not spoken about enough in Congress,” says Mariah Cooley, 19, co-founder of March For Our Lives – a student-led organisation in support of gun control legislation. Cooley got involved with gun reform advocacy after losing a close friend, and later a cousin, to school shootings. “The fact that bulletproof backpacks exist is a problem in itself,” she says. “That shows you that since the government isn’t doing anything to end mass shootings, companies are trying to invent solutions to keep us alive, when it should be our lawmakers.”

Much like the video game developed by Homeland Security to train educators in how to respond during a school shooting, these “solutions” merely address the symptoms of gun violence, rather than gun violence itself.

Despite its prevalence, gun violence, Waceline says, has always been “swept under the rug,” and not just by the government, but within her school, too. “I’ve never really sat down with my friends to talk about how we felt about it [school lockdowns]. It would just be like, a drill happens, where we huddle down in fear, and then we go about our day.”

But TikTok, she says, is offering a much-needed space to vent about these issues. Waceline’s video was met with an outpouring of support from people who said they’d had the same experience. “It helps to see I’m not alone,” she says, “and I’m glad it didn’t take another massive tragic school shooting to get people talking about it again.”

Nonnah, a 23-year-old from Connecticut, also posted a TikTok comparing the scenes at the Capitol with school shootings. She says that her video was flooded with comments from students sharing the “most ridiculous” safety procedures their schools had advised. These ranged from “just put a piece of paper over the door so they can’t see you, or just play dead,” recalls Nonnah. “Or run away, or if you can’t run you should hide, or if you can’t hide, you should fight, or use your books to fight.”

“How the hell am I supposed to fight a bullet with Wuthering Heights?” Nonnah says. “Like no, this isn’t a situation where the pen is mightier than the sword.” Another TikToker, Kennie Taith, created a viral video listing school shooting safety tips, in a mock tutorial which ended with: “Congrats! You just survived your first shooting! I really, really hope this helped. Sincerely, every member of the American student body.”

Just had to put this out there… pic.twitter.com/UY8N6be5iD

For Nonnah, #DarkHumour is more than just a TikTok genre: it’s something she has used to process trauma for as long as she can remember. “My generation [Gen Z] have been surrounded by this looming threat of terror all their lives: seeing Black boys and girls – people who look like me – being shot up in Walmart, school shootings, now a pandemic”

“Our [Gen Z’s] anxiety has completely manifested into art, and into creativity,” Nonnah says. “We protest, we beg for change, but nothing happens, so all we can do is laugh about it, joke about it, make a video about it, because our TikToks make the news before social change does.”

Both Waceline and Nonnah don’t believe that the events at the Capitol will act as a wake-up call to Congress, and they are doubtful about the impact a Biden-Harris presidency will have on gun reform. For Waceline, growing up in the shadow of the 2016 Orlando massacre and seeing the response to those horrifying events has made her deeply sceptical: “It was kind of like, well, if that isn’t going to be the thing that sparks the change, then what will?” she says.

But Mariah Cooley – who has met with Joe Biden and Kamala Harris in her role at March For Our Lives – is more optimistic. “They have made the effort to really listen to us and our needs. I am hopeful they will follow through, especially now that we’ve won the Senate, there’s really no excuse for them not to pass [these bills].”

What will likely have more of an impact is the growing political power of Gen Z, as more of them reach legal voting. “If we keep that momentum of being politically engaged, and they [government] know we are paying attention to what they’re doing,” says Cooley, “we will be able to hold them accountable.”

Find out how you can support March For Our Lives on their official website.

Linkedin
RELATED ARTICLES
OTHER ARTICLES
In his 2008 series, the photographer pictured himself as Angela Davis, Martin Luther King Jr., Malcolm X, and other prominent figures.
With skyrocketing rents, packed out viewings, bidding wars and more, renting in London has never been harder.
Yesterday thousands gathered outside Buckingham Palace after news of the Queen’s death broke.
Rhiannon Adam spent three months capturing an ageing society wracked by division, isolation, and the aftermath of scandal.
Photographer David Corio’s archive offers a glimpse inside a revolutionary era of music and nightlife.
As the Scottish government announces a rent freeze, an activist with Living Rent who fought and won shares how they did it, and what must come next.