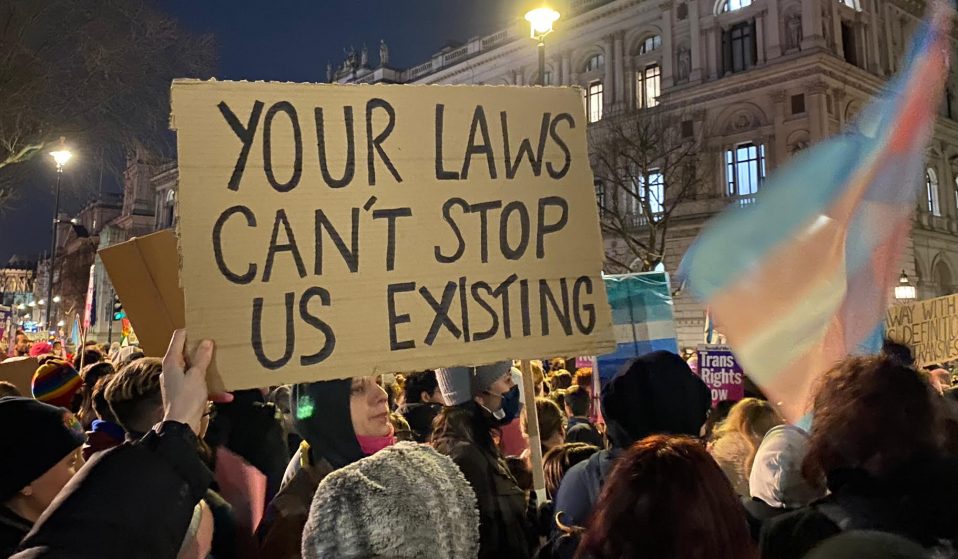 After blocking the Scottish government’s gender recognition reform bill, Westminster is now devising further changes to the law to make it harder for trans people to self-identify.

After blocking the Scottish government’s gender recognition reform bill, Westminster is now devising further changes to the law to make it harder for trans people to self-identify.

It probably hasn’t escaped your notice that, despite being just a few weeks into January, this year has been dominated by stories about trans rights. This week, a row around Gender Recognition Certificates (GRC) between the Scottish and Westminster governments has intensified, commanding huge amounts of media attention.

A Gender Recognition Certificate allows you to change the gender marker on a British birth certificate. Your passport, banking details and NHS records can all be changed without one. It has no relation to which spaces you can or cannot access. Until this point, across the British Isles this has required you to submit two medical reports confirming that you are, in fact, trans, alongside evidence that you have lived in your ‘affirmed gender’ for the last two years. Then, if you are married or in a civil partnership, your spouse must provide a statutory declaration confirming that they are married to you, and want to stay married if you receive your GRC.

The Gender Recognition Reform (Scotland) Bill sought to change this. The reforms, which were the result of seven years of consultation, were passed overwhelmingly by the Scottish Parliament on 22 December last year. They lowered the age someone could get a GRC from 18 to 16, and allowed a person to do this through self identifying, rather than gaining a medical diagnosis of dysphoria.

In response, the government in Westminster announced their intention to block the bill, employing a Section 35 order for the first time since the Scottish parliament was established in 1998. The reforms in the bill have been the source of fierce debate, with ‘women’s rights’ campaigners claiming self-ID will put women at risk. In countries where self-ID has been law for over a decade there is no data to suggest this is the case.

Finland's Minister of Education announces that it will be the latest country to reform the gender recognition process.

That follows the recent successful passing of laws in Spain and Germany – and Scotland, until the UK government intervened. https://t.co/9GqcTZatVE pic.twitter.com/NCNqCHc7HU

In the aftermath of Parliament’s vote to block the Scottish bill, and with court cases looming, much has been made of the constitutional implications of the reforms and the stark difference in systems between the two neighbouring countries. Meanwhile, other swingeing reforms also threaten the rights of trans people.

Earlier this month, the Minister for Women and Equalities Kemi Badenoch announced her intention to update the list of countries whose legal gender recognition process the UK accepts under the Gender Recognition Act. In a ministerial statement, Badenoch wrote that since 2011, some of the countries on the existing list have made changes to their gender recognition processes, and “would not now be considered to have equivalently rigorous systems”.

In short this will see the end of fast-track legal recognition for trans people from affected territories, meaning those who’ve been through the legal process in their home countries will no longer automatically qualify for a UK certificate. They will have to submit to the process twice.

Campaigners say it’s no coincidence that Badenoch’s proposal arrived at a time when news that Westminster was considering blocking the Scottish reforms was already circulating. “We think the timing of the government’s sudden interest in upkeep of the GRA is highly suspicious, given their ongoing threats of legal challenges to Scotland’s progressive GRA reforms,” says Gendered Intelligence’s Cleo Madeleine. “But it remains to be seen whether other countries will be affected or whether this is a punitive measure against Scotland specifically.”

While nothing has been publicly confirmed, Canada, Australia and New Zealand have all modernised their gender recognition processes in one way or another in recent years. As a result, they could all be removed from the approved list.

In Australia, where I’m from, there is no GRC equivalent. Currently, the UK accepts updated Australian birth certificates in their place. The system to update the gender on your birth certificate varies from state to state. Some have no requirement for any medical oversight, while others require gender affirming surgery. The Australian Capital Territory demands that trans people have received “appropriate clinical treatment” – a deliberately vague statement designed to allow room for individual judgment.

Updating a birth certificate issued in my home state of Queensland has always required one form of surgery or another. This used to include bottom surgery for trans men, a notoriously expensive procedure with historically less-than-ideal results. These days, they’ll let you off with a hysterectomy. Because of this invasive criteria, I’ve personally never gone through the process. Legislation is slowly making its way through the Queensland state government to change this. Personally I hold little hope for its safe passage, but it’s always nice to be surprised.

I voted in opposition to the government blocking gender recognition reform in Scotland.

The Tories are using trans people as a political football, and undermining devolution in the process.

I stand in solidarity with the trans community. We must reform the GRA across the UK.

Those of us not born in the UK might not even realise we need a British GRC. My British passport is marked with an M. I thought that since I don’t have a British birth certificate to change, the only thing standing in my way of being a man in the eyes of King and country was my Australian birth certificate and its red-tape-tangled ‘F’. It turns out it is not.

“This mismatch of passport against other documents has been a real hassle,” says Professor Sandy O’Sullivan, a Wiradjuri transgender/non-binary person and Professor of Indigenous Studies at Australia’s Macquarie University. “There’s some other complexities, but living and dying are pretty basic things that all of us do. The fact that we are precarious in our right to live in our own gender because of something as ridiculous as a government document is why we are doing this work to change it.”

It’s important to note that most trans people in the UK do not have a gender recognition certificate. When I asked for clarification, Kemi Badenoch’s office stated that between 2009/10 and 2021/22, 4,741 people applied for a GRC using the ‘standard’ UK track. Over the same period, according to the government’s record, 283 people used the overseas route. That’s just over one quarter of the capacity of a single TfL Central Line train, in ten years. You’d call that a quiet journey.

Many people are unwilling to submit themselves to the arduous task of legal gender recognition, partly because a Gender Recognition Certificate has few day-to-day use but as Professor O’Sullivan alludes to, there are major implications from not having one.

GRCs matter to plenty of people, not least because they make us known quantities in the eyes of the law. The gender on your birth certificate is reflected on marriage and death certificates. “The fact is that trans people cannot get married – or even die – under the correct gender without going through the long, invasive, and often expensive process of getting a GRC,” says Cleo.

“I only went to the effort of sorting a GRC when it came time for me to get married,” says Laura Dale, the author of Gender Euphoria and Me and My Dysphoria Monster. “In UK weddings, the terms ‘bride and groom’, ‘husband and wife’, are terms that are legally required to be used in accordance with your birth certificate, and I really didn’t want to have to stand there on my wedding day, dressed in a beautiful flowing gown, feeling elegant on the most special day of my life, getting misgendered and called a man during the process.”

Pursuing a Gender Recognition Certificate in the UK, for those who decide to take that route, is a stressful and degrading process. Often, it feels deliberately so. “I almost failed to get one,” says Laura. “Besides the price, and the long and stressful paperwork process involved, there is no opportunity to appeal your case to a human being. In my case, my mum lost a 20+ year-old Deed Poll certificate from when she remarried and changed my surname. I lacked one 20 year old name change document unrelated to transition, and was refused a GRC, having to hop through unbelievable hoops to find alternative acceptable evidence.”

Sandy says there is “of course” a colonialist element to all of this. “It’s also – like all colonialities – impractical,” they say. “Colonial practices like this often come undone when others call it out. I write about the colonial project of gender quite often because fundamentally it is about controlling the bodies and rights of others… in this case both within and – rather bizarrely – outside of their jurisdiction.”

It doesn’t take an expert to figure that all of this is just more political haymaking. Foreign-born trans people in the UK are a tiny minority of a tiny minority, and even fewer apply for a GRC. Why, then, does it matter if the British government changes a system used by so few people?

It matters because this does not exist in a vacuum. Since the government began publicly considering gender recognition reform in 2016 the topic has become a flash point for transphobia thinly disguised as public debate.

Changing the list doesn’t make the gender recognition act stronger. All it does is make things harder for the small number of people for whom this process is necessary. People who want to get married, or want to die with dignity, or just want to live their lives with the knowledge that they are fully, legally themselves.

Linkedin
OTHER ARTICLES
Activists and campaigners are fighting back against new laws that would seriously undermine the ability to take industrial action, calling it an attack on fundamental workers' rights.
Following the release of his debut single, Deyaz talks battling addiction, dealing with his struggles through music, and building a budding music career from his living room.
The action took place in response to the 200 asylum-seeking children who were placed in hotels run by the Home Office who have gone missing.
After fleeing the war in Ukraine, people are finding it impossible to secure affordable and decent housing in the UK.
A recent High Court ruling against the right to wild camp in Dartmoor National Park sparked the largest land protest in history – and campaigners say their fight is not over yet.
Since 2007, Gideon Mendel has made 20 trips to document floods in 13 countries. The result is an alarming record of what has already been lost to the climate emergency.