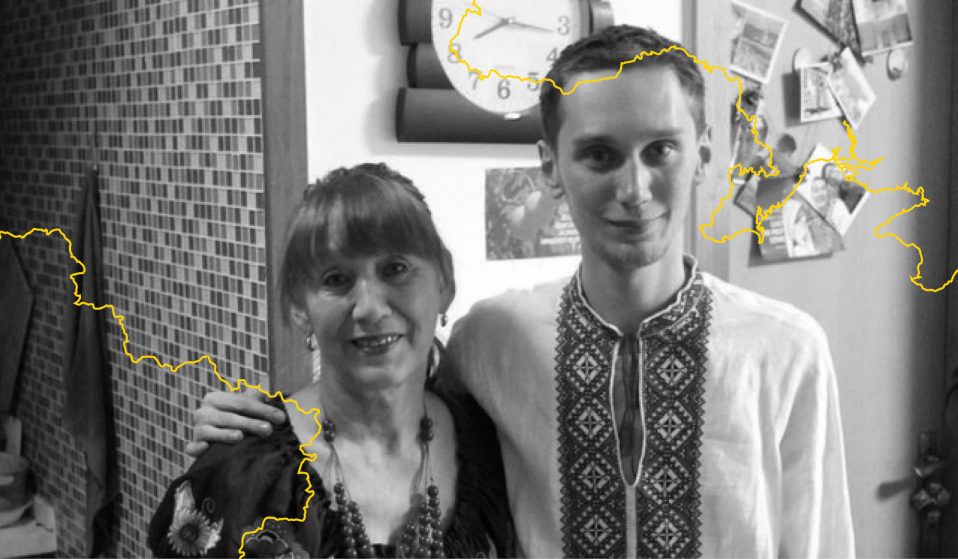 Photography © Arthur pictured with his mother

PhD student Artur Nadieev describes the bureaucratic nightmare he is facing as he tries to reach the UK to escape the crisis in Ukraine.

PhD student Artur Nadieev describes the bureaucratic nightmare he is facing as he tries to reach the UK to escape the crisis in Ukraine.

As Vladimir Putin continues his invasion of Ukraine and over two million people pour out of the country, the UK has been criticised for not doing enough to help those fleeing for their lives.

So far, only 500 Ukrainian refugees have been let into the UK under the new Family Scheme and there have been reports of Ukrainians being turned away at UK borders. While others are stuck in a maze of red tape, with little or no help from the Home Office. Artur Nadiiev, a 33-year-old Ukrainian PhD student at Nottingham University, describes the bureaucratic assault course he has had to endure as he tries to get a student visa for the UK.

I arrived in Munich on 9 February [2022], two weeks before the war. I was planning on visiting a friend, I did also have concerns about the possibility of war, but I didn’t expect it to be so full-scale. I thought maybe it would be in the eastern region or at the borders, but not in all cities throughout the whole country at once. I lived in Kyiv before, but I am originally from Donbass, the occupied territories in the east [fighting started there in 2014 between Russian separatists and the Ukrainian military], so it feels like I am reliving the war there again.

I’m studying at Nottingham University  and I was first registered at the China campus, but due to the pandemic I only spent two months there, so I was in Ukraine for most of my three years. The school decided to transfer me to Nottingham when the war started for my safety.

I went to the Home Office website to apply for the student visa and it said I needed to take a TB [tuberculosis] test and there is only one hospital in the whole of Ukraine which is approved by the Home Office. And by that time, I was already out of Ukraine and the war had started, so there was no way I could go back to Ukraine and take the test there.

I said I couldn’t find any approved hospitals in Germany because they don’t have to take this TB test – no EU countries do. So, I asked which hospitals in Germany will you approve of if I go and take the TB test, because I don’t mind taking the test, just tell me where I can do it.

The reply back said that as a Ukrainian you have to take the test, and since there is no designated hospital in Germany you have to go a neighbouring country. I looked at the list of the neighbouring countries and it was Russia, Belarus, Armenia. I’m definitely not going to Russia! I emailed them back saying I know there is no designated hospitals but what hospital would be ok? I don’t want any special treatment, I want to follow the protocol, but [they should] be a bit more reasonable. I haven’t heard back from them.

I told that to my professors at Nottingham and they got the media involved, they got MPs involved, they even got an immigration lawyer involved to help us figure it out. Then I got sent a link to a Home Office announcement on 24 February saying it’s ok for Ukrainians applying via the student route not to take the TB test because it’s impossible to take the test in Ukraine.

That was contradictory to the email I got, so I was still very confused. It makes zero sense – why would you update the rules and then not let people take advantage of the new eased regulations? It took several MPs to go to the Home Office and write letters to the minister of safe and legal migration [Kevin Foster], to get it figured out.

The last email I got was from my professor whose MP asked on my behalf about the situation and they verbally confirmed that I don’t need to take the test. They [the Home Office] said they didn’t have time to update the online system. It was just very confusing and frustrating as the visa fees plus insurance costs up to £1,000. It’s crazy to risk it [in case it gets refused].

After applying for the student visa, I need to make an appointment with a visa centre in Munich – I read the reviews there and some people have said they had to wait eight weeks to get processed.

I’m not looking to immigrate, I’m not looking for refugee status – all I want is to finish my PhD in the UK. I don’t need extra help or special treatment or anything. The last four days have been really stressful. I feel bad for people who are in a similar situation but maybe don’t have as many connections as I do, because literally three different MPs had to be on this case.

My mum is still in Kyiv. I’ve been asking her to move out but she keeps saying she is too old and too tired to move. I understand that – it’s draining emotionally and physically. I’m sure she would be very happy to join me in the UK, but I think it’s too expensive and Poland has opened its doors for us, as well as other EU countries, so it’s much easier [to go there]. But she refuses. She won’t listen to me.

It’s pretty bad in Kyiv at the moment. She doesn’t leave the apartment, she sleeps either in the bathroom or the hallway where there are no windows [to avoid attacks]. She says everything is ok, but of course, she is lying because she doesn’t want me to worry. I’ve spoken to other people in the neighbourhood and they say they hear bombing.

Without the help of the MPs [Lillian Greenwood, Darren Henry, and Nadia Whittome] and my university professors, I would be stuck here. There is definitely not enough support for Ukrainian students applying for visas at the moment.

A Home Office spokesperson said: “Last week we announced a new sponsorship route which will allow Ukrainians with no family ties to the UK to be sponsored to come to the UK.

“This is alongside our Ukraine Family Scheme, which has already seen thousands of people apply, as well as changes to visas so that people can stay in the UK safely.

“The routes we have put in place follow extensive engagement with Ukrainian partners. This is a rapidly moving and complex picture and as the situation develops we will continue to keep our support under constant review.”

Linkedin
RELATED ARTICLES
OTHER ARTICLES
Photographer David Hoffman recalls documenting the extreme wealth inequality around Tower Hamlets and Hackney int the 1980s.
The author discusses the all-consuming nature of heartbreak, and turning the experience into an incisive exploration of love and loss.
The past five years have seen a staggering increase in foodbank usage across the UK. Now, staff fear things are set to get much worse.
The singer-songwriter discusses her intimate new project – and the advice she’s picked up across a career as one of rock’s leading voices.
Proposals to introduce a minimum GCSE threshold for student loans will disproportionately affect those from marginalised backgrounds.
Whether it's partygate, the climate crisis or the spiralling cost of living, the fightback begins on the picket lines writes Tommy Vickerstaff