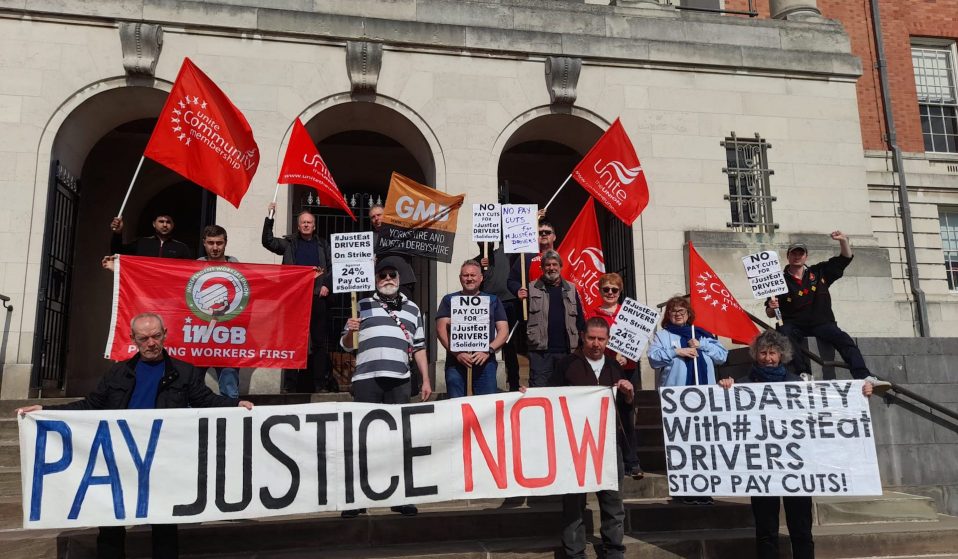 Now lasting for over 100 days, food couriers in Sheffield are continuing to lead a strike in protest of their pay cut.

Now lasting for over 100 days, food couriers in Sheffield are continuing to lead a strike in protest of their pay cut.

It’s unusually cold in Sheffield. The sunrise on 1 April brings crisp, sunny weather after snow showers the previous day. It also marks the 100th day of strike action by couriers in the city – the longest such strike by gig economy workers anywhere in the country.

The strike, organised by couriers that are part of the Independent Workers’ Union of Great Britain (IWGB), comes after JustEat subcontractor Stuart Delivery cut the base rate of pay by 24 per cent in early December last year. Throughout the duration of the strike, couriers have formed pickets outside high-profile JustEat clients in the city, with McDonald’s, KFC, and Greggs all being targeted. The pickets are designed to stop drivers picking up orders rather than customers entering the restaurants.

Khalil Lange is one of those drivers. Back in January Huck spoke to the father of three as the strike finished its first month. Despite the financial burden of striking, he was resolute in taking action and winning. Two months on, he’s still out on the picket lines.

Standing outside of Greggs in the centre of Sheffield he explains more about why the strike isn’t letting up. “We’re still here because the company chose to rob us instead of rewarding us,” he says. “We were the backbone of this country through the pandemic. We were a vital service that kept everything running and we were proud to do it. As it winds down, we weren’t necessarily expecting a raise, but what we got was a pay cut.”

solidarity to amazing @IWGB_CLB in sheffield on strike day 100. striking to see a reverse in a pay cut and to be recognised as workers (and all the rights that come with that). here local @ucu members have come down to support! victory to the workers! pic.twitter.com/sQYd6rTbD0

The strike comes as the cost of living crisis continues to bite. Just a couple of months into the pandemic, petrol bottomed out at just over £1 a litre. Since then, it’s escalated – at the time of writing, it’s £1.63 per litre and rising. “Each month it gets less worth doing the job. Because each month, you’re not making enough for the bills,” says Lange. “I’ve actually stayed at home off work for the last three weeks because I cannot afford my delivery insurance.” The insurance, much like petrol costs, must be paid for by the drivers. Delivery insurance for Lange’s car runs into the thousands a year, on top of normal insurance. “This is why we’re fighting the company. They’re making good money whilst we’re not even making enough money to be able to do the job.”

Lange speaks of drivers looking for other work to do alongside food couriering just to make it tenable. Drivers across the city, and indeed the country, feel like their hands have been tied and they have no option but to strike. Many couriers are forced to work upwards of 70 hours a week to make ends meet. Meanwhile, Stuart Delivery, ultimately funded by the French public-owned postal service, has one of the highest margins on deliveries in the gig economy and handed a £2 million pay rise to CEO Damien Bon in 2020.

Since the start of the strike, pickets have sprouted up across the country, with action on 1 April taking place in Sheffield, Middlesbrough, Chesterfield, Morley, Birstall, Heckmondwike, Ashford, and Worcester with actions having taken place previously in Huddersfield, Sunderland, Blackpool, Mansfield, Wolverhampton, Folkestone, Thanet, Aldershot, Farnborough, and Belfast. The union is also working alongside Leigh Day Solicitors to take Stuart to court on behalf of 150 couriers over misclassification of worker status.

In Sheffield, the strike enjoys wide support across the city. Deborah (who asked to keep her surname hidden) is a striking UCU lecturer who came down on the 100th day with some of her colleagues to show support. “They don’t earn a lot of money as it is. So to do 100 days, a strike is phenomenal. And actually, there’s lessons that we can learn from the drivers about being resilient. We’re here today to show them they’re not on their own in this, that people are actually listening”.

While riders are struggling out in the rain and snow, risking catching COVID, @Stuart_Delivery management sit at home and take away huge pay rises for themselves.#PayRiseNotPayCut pic.twitter.com/127siOK63Z

It’s a sentiment shared by Olivia Blake, Labour MP for Sheffield Hallam. “Sheffield has a proud tradition of standing up for what’s right. The couriers and their families must not be forced to pay the price for Stuart’s corporate greed,” says Blake. “Our city will continue to stand behind these workers until Stuart bosses stop this exploitation and do the right thing: reverse the pay cut and give their couriers the pay rise they deserve.”

Despite the huge uptake, and wide support through the city, Lange admits it’s not all been plain sailing. “There have been fights and arguments on the picket lines,” he explains. “You gotta understand, you’re affecting driver livelihoods at a time when they’re not making enough money. We’re not paid by the hour, we’re paid by the job, so when you stop someone taking that job, you take a chunk of money off them. It’s understandable because people are so desperate but as time has gone on, they’re actually starting to come on board because they’re like – how’s the company still not done something?”

Following sustained pressure from the pickets, Stuarts UK general manager Brendan Hamill finally agreed to meet with the drivers last week. Parirs Dixon, a courier and chair of the Sheffield Couriers’ Branch (IWGB) took part in the meeting. “It became clear during the three hour meeting that Mr. Hamill was not there to negotiate in good faith. He spoke down to me, told me our fees prior to the cut were too high, and seemed as if he was trying to break my spirits to stop the strike,” says Dixon. “Workers are incensed about the contempt he showed me and other cities are starting to take action after hearing about the meeting. This has only strengthened our resolve and we have no intention of stopping until we get the pay rise we are owed.”

Hamill’s assertion that “fees were too high” is the first public admission by the company that the new pay structure equates to a cut. To those on the pickets, this is an important moment and has only served to breathe new life into the strike. There have been small wins so far. The union states that the company has changed a controversial terminations policy which saw driver’s accounts just deleted with no appeals process, and agreed to paid waiting times at £10/hour. Couriers are holding out for all of their demands, including a pay rise, to be met according to Alex Marshall, President of IWGB.

“After a 100 days of action from workers across the UK, we are seeing that even Stuart Delivery’s top management can’t keep up the ridiculous lie that their pay cuts are ‘fairer’,’ Marshall tells Huck. “This strike is about survival. That’s why we’re seeing the strike continue to spread across the country and actions escalate. We will continue to fight until we get the pay rise the workers not only deserve, but desperately need.” Stuart did not respond to Huck’s request for comment.

Linkedin
RELATED ARTICLES
OTHER ARTICLES
Financial turmoil is pushing people who work in the sex industry into more dangerous and desperate situations as a means of survival.
The workforce is now gearing up for industrial action after receiving a measly pay rise, reports Ella Glover.
Ahead of the release of their first collaborative album, the producer and rapper talk psychedelics and the state of UK hip hop.
As the Scottish government announces a rent freeze, an activist with Living Rent who fought and won shares how they did it, and what must come next.
Yesterday thousands gathered outside Buckingham Palace after news of the Queen’s death broke.
In his 2008 series, the photographer pictured himself as Angela Davis, Martin Luther King Jr., Malcolm X, and other prominent figures.