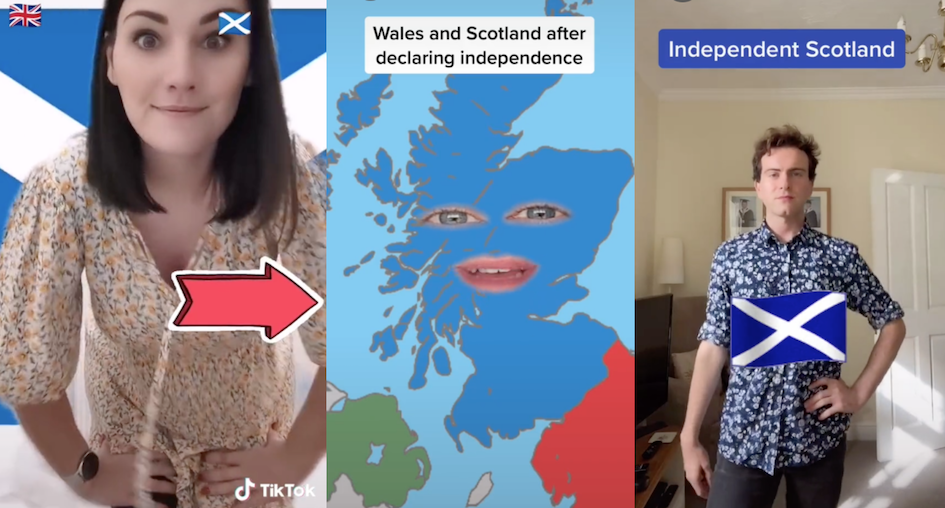 As calls for a second referendum grow louder, TikTok is giving young Scots a platform to carry on their fight through lockdown and to build solidarity with other independence movements.

As calls for a second referendum grow louder, TikTok is giving young Scots a platform to carry on their fight through lockdown and to build solidarity with other independence movements.

It’s been a whole seven years since Scotland’s first independence referendum, but the nationalist spirit hasn’t exactly petered out. If anything, the events of the intervening years – the broken promises of the Better Together campaign, Brexit, the Tory landslide in the 2019 General Election and Boris Johnson’s mishandling of Covid-19, to name but a few – have only fuelled the fires. Currently, 53 per cent of Scottish voters support independence while only 41 per cent are in support of the union, as calls for a second referendum are growing louder.

On this side of the border, with approval ratings for Nicola Sturgeon’s SNP (Scottish National Party) riding high and resentment towards Boris Johnson on the rise, more and more people are demanding self-determination for the nation. And with newspapers like The Sunday Times pronouncing “the end of the union”, as well as “BoJo’s panicked day trip to the Central Belt”, it seems like Southerners are increasingly worried about Scotland’s latest efforts to push for independence.

With the Scottish Government’s strict lockdowns, you might imagine pro-independence organising to be at a standstill, hampering the momentum of the movement for a second referendum. But with IRL independence marches off the table owed to the pandemic, Scots are ensuring their voices are heard online to advocate for #IndyRef2. And though this is by no means a new plan of action – think back to the sermon-like statuses flooding Facebook in 2014 – nationalists are expanding their arsenal to include TikTok, to interesting effects.

With even the most cursory scroll yielding a wealth of lipsyncs, duets and pithy comebacks, the app is allowing younger Scots to explore a divisive topic (which has previously escalated into violence) in an uncharacteristically light-hearted and dynamic fashion. This, at least, is the experience of Scott, 29, from Doune, who uses the platform to share his thoughts on independence, all while educating followers about Scottish cultures through videos of lesser-known locales like Ullapool, Aberdour or Loch Leven.

For him, TikTok is attractive not because it’s the best place for nuanced conversations, but because it allows users to shake off the stuffiness associated with this kind of politics chat. “Other social media platforms allow for more in-depth discussions on independence, but don’t allow for the same level of creativity, which can make the debate more interesting,” Scott says over DM.

The TikTok algorithm rewards ingenuity, promoting videos that are funny or relatable, while app features like stitches and duets encourage collaboration. This lighter approach bypasses some of the weightier history around the independence movement in recent years, allowing users to engage without pressure and preconceptions – and it’s reaching an ever-growing audience.

With hashtags like #ScottishIndependence racking up 11 million views – not bad for a country of 5 million people – Scottish nationalists are making a mark on the platform. In comparison, the #unionist hashtag is currently stalling at under a million views – a disparity shouldn’t necessarily surprise us. Emilia Belknap, a PhD researcher at the University of Edinburgh who focuses on voting behaviour and constitutional change in Scotland, says the social media-savvy of independence supporters mirrors that of the SNP.

Beginning as early as 2011, the SNP has leveraged the influence of a powerful online presence, getting a digital head start on their unionist counterparts that has continued throughout the following decade. “When you’re looking at it from a marketing standpoint in comparison to, say, some of these older parties like Scottish Labour or Scottish Conservative, the SNP’s online presence is really, really good,” Emilia says. “They’re more engaged on the internet and seem more tuned in.”

While the SNP is yet to make its official debut on TikTok, it seems likely they are working on it. When they do land on TikTok, the party will discover the unique political opportunity the platform presents: namely, more engaged debate across the political spectrum. This is something that Elias, 26, a political TikToker from Glasgow whose content covers issues like Scottish independence, dynamics within the SNP and biracial identity, points out.

“On different social media platforms, there’s no benefit to dissenting opinions appearing and obviously you can delete comments as they appear but on TikTok,” Elias explains. Because of how the algorithm works, “The more comments you get, the more attention you get overall.”

Breaking through the echo chamber traditionally associated with online activism, TikTok’s model makes political dissent advantageous, particularly for smaller accounts. By engaging with potentially controversial topics and, in the bluntest possible terms, having it out with trolls in the comments, accounts without a pre-existing following can extend their reach and land on the ‘For You’ page.

This, Elias argues, is why a topic affecting a relatively small demographic is beginning to rack up views and reach a wider audience. “When it comes to a topic as passionate as Scottish independence, especially with the amount of polarisation in that topic, you get a lot of comments,” he says.

This growing visibility of #IndyRef2 TikTok has also triggered a swell of videos that touch on the concept of a Celtic Union, or an alliance between an independent Wales, Cornwall and Scotland and a united Ireland. While still a relatively under-explored niche with just 57,000 views on the hashtag, more general expressions of solidarity between Irish, Welsh and Cornish TikTokers are growing as different independence movements speak out in favour of one another’s right to self-determination.

This is something that Megan, a leftist TikToker in her mid-20s who uses her platform to raise awareness of the benefits of independence, particularly values from her time spent on the app. “One thing I do enjoy is seeing content by Welsh, Northern Irish and Irish creators that are experiencing the same issues we are, but from a different perspective,” she tells Huck. “Some have a serious tone to their videos while others have a more fun and entertaining way of getting their message across and it is fantastic to see the differing takes on the same topics.”

It’s this multiplicity of opinion, and emphasis on self-expression, that makes TikTok fertile ground for the independence movement as it enters its next phase and looks to catch the eye of Gen Z and millennial audiences. By encouraging different players within the independence movement to share ideas and placing an emphasis on spontaneous communication, TikTok might just allow online activists to move reach past the echo chamber and genuinely inform new opinions. And, at the very least, we can now watch videos of a talking map of Scotland and claim it’s “political research”. Fàilte gu TikTok!

Linkedin
RELATED ARTICLES
OTHER ARTICLES
Photographer Phyllis Christopher recalls capturing sex and protest at a time when the city had become a haven for the queer community.
From the Yakuza to a biker gang, Bruce Gilden recounts capturing Tokyo and Osaka in the ‘90s.
While protests over abortion rights rage in the US, access to abortion services is still almost nonexistent in parts of the UK.
The situation in Afghanistan remains dire, with many groups facing persecution at the hands of the Taliban.
The government’s failure to take long Covid seriously has led to the formation of a group campaigning for the thousands of forgotten victims of the illness.
Following the release of his newly republished 1991 book, Redheads, the American photographer reflects on his celebration of ginger people and their magnetic power.