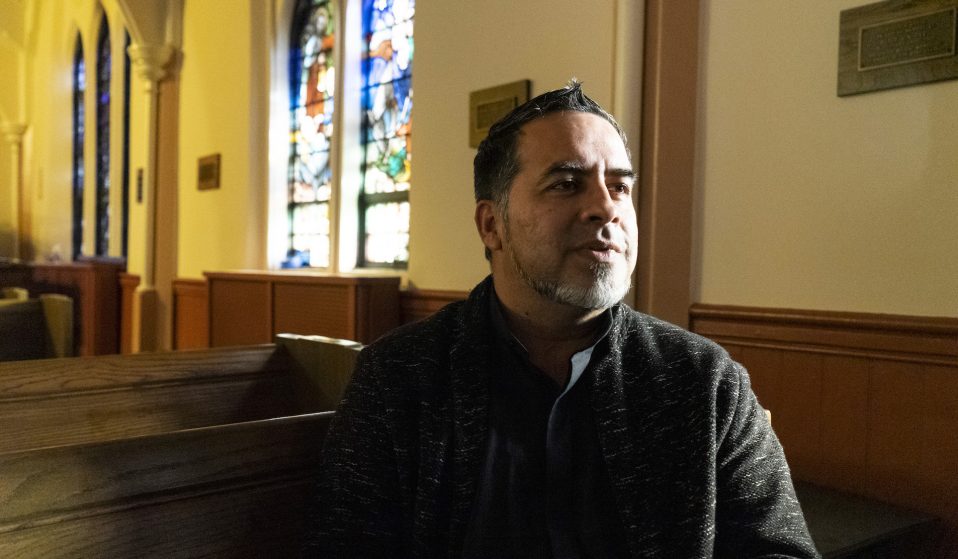 We hear the stories of immigrants and activists on the frontlines of resistance to the Trump administration’s racist border regime – and ask if a Biden presidency could ever mark an end to the injustices.

We hear the stories of immigrants and activists on the frontlines of resistance to the Trump administration’s racist border regime – many of whom are now hidden away in churches – and ask if a Biden presidency could ever mark an end to the injustices.

Victor Eduardo, 8, raises his wooden gun and unleashes a shot across the room. On the other side of the pews, his sister Maryeli Dayani, 10, dives out of the path of the incoming bullet and runs down the nave to hide. The boy curses himself for missing, reloads his gun and heads in pursuit of his sister, giggling as he runs through the church.

We’re in Holyrood Episcopal Church in Washington Heights, nestled in the shadow of the George Washington Bridge in upper Manhattan. Victor Eduardo and Maryeli Dayani have been living in the church for nearly two years with their family – asylum seekers from Honduras – since they were threatened with deportation by Immigration and Customs Enforcement (ICE). They were offered shelter by Dr. Reverend Luis Barrios, who is not only the church’s outspoken reverend but a leading figure in New York’s New Sanctuary Movement (NSM).

The NSM has been on the frontlines of resistance against the Trump administration’s brutal immigration policies, helping to give voice to millions of undocumented people and asylum seekers living in fear of deportation across the US.

It is a national network, whose backbone is formed by churches in cities across America, which provide legal, emotional and practical support to those caught up in the US immigration system. In extreme cases, they take families to live inside their churches to prevent them from being picked up and deported by ICE. 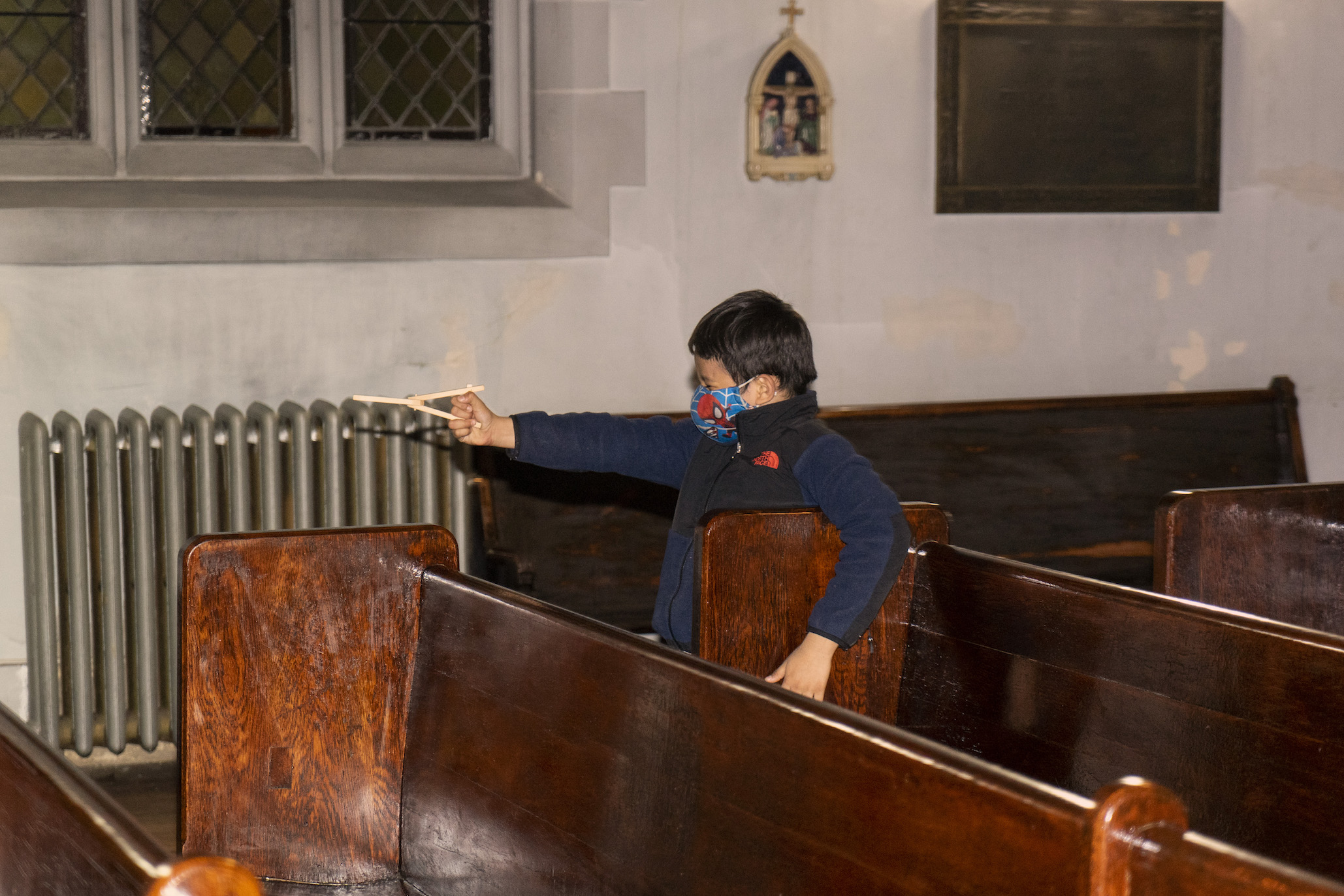 The NSM’s battle to highlight the injustices of the US border regime vastly pre-dates the Trump administration. With the incoming Biden administration, they will be stepping up their efforts to push for not just lofty rhetoric and cosmetic changes, but fundamental reform.

Victor Eduardo and Maryeli Dayani’s parents are Edin and Reina, who were forced to leave Honduras in 2017 by the dire political and humanitarian situation. “Our president was not elected legitimately and he stays in power by force,” Edin explains.

“There have been many conflicts with the opposition, and lots of killings. People are still dying. Other countries are sending food and aid but this never arrives to people – the government steals it. Problems for me started when I got involved with politics: there were threats and eventually, I was forced to leave.”

Honduras has been destabilised by both extreme storms and a US-supported coup in 2009, when Hillary Clinton was Secretary of State under the Obama-Biden administration. The country’s current autocratic leader, Juan Orlando Hernández, assumed power in 2013 in an election marred by repression and allegations of fraud. Both Hernández and his predecessor have used the military to consolidate power and the killing of activists has risen dramatically – including environmentalist Berta Cáceres, whose death made headlines around the world.

“We are grateful for the support of the church and they have done their best to make this as comfortable as they can for us,” Edin explains, who leaves each morning to work in construction before six am, returning late each night. “It’s hard to raise a family like this; it took a lot of adjusting.”

“We can’t ever relax because we have been fighting the immigration case for the last two years,” he continues. “We have no idea when it might be resolved because our appointment was cancelled due to the pandemic.”

The impact of the pandemic on these communities cannot be overstated. Near a deserted polling station on election day, a line of people stretching over two blocks wait outside The Good Shepherd Lutheran Church in Bay Ridge, Brooklyn, for food relief. Inside, Reverend Juan Carlos Ruiz – head pastor at the Good Shepherd – explains there was always considerable need from the many struggling to get by in the local community, but since the pandemic, demand has exploded. 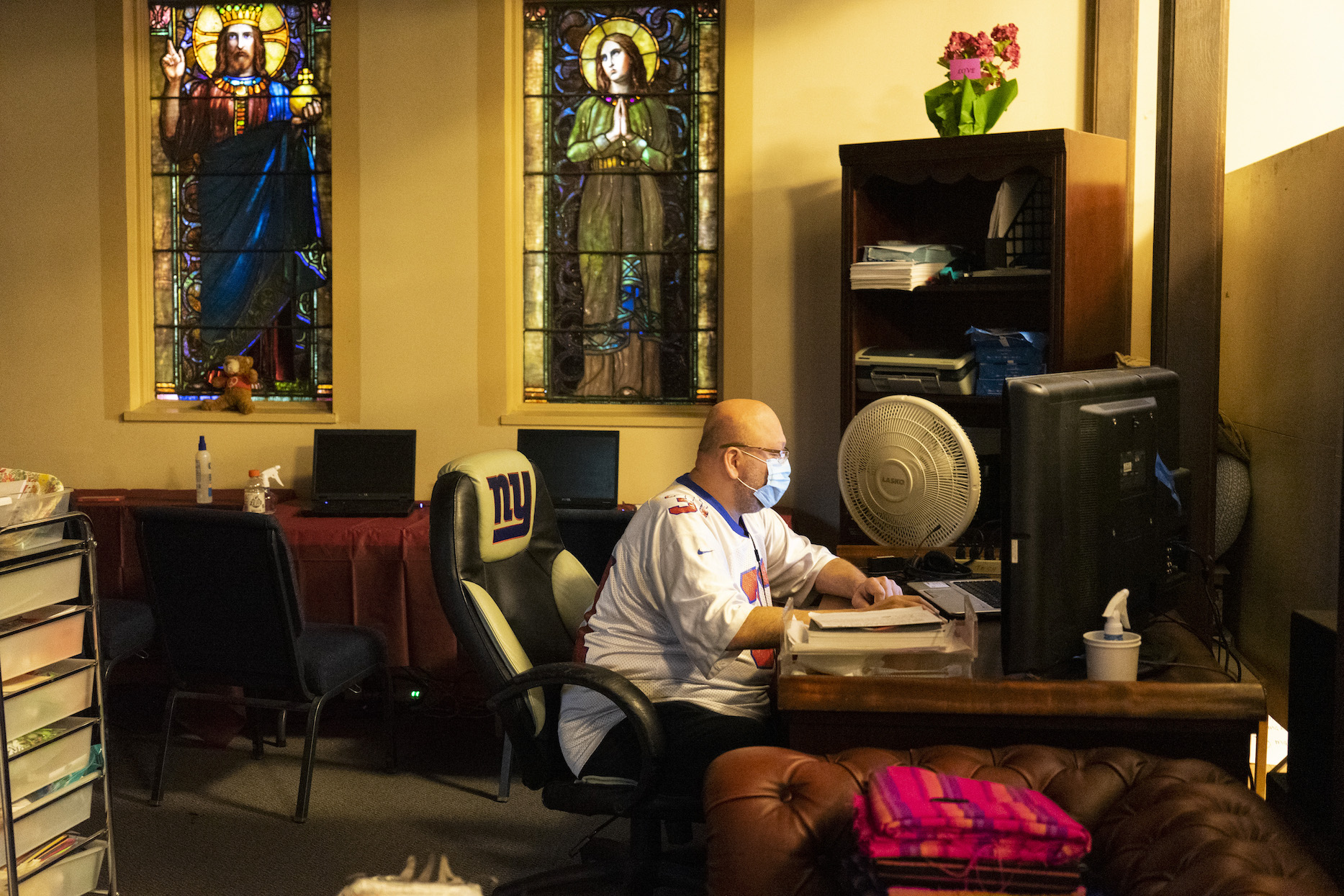 In 2007, Rev. Juan Carlos was one of the co-founders of the New Sanctuary Movement. When we meet to talk a week after the election, he’s just gotten back from Mexico on a trip to return the ashes of a member of the church’s congregation who died of COVID-19. The deceased’s family in the US are undocumented and were therefore unable to make the journey themselves.

“Sanctuary is about opening our church to support people in need and resisting the rise of anti-immigrant politics and a system that labels people ‘illegal,’” Juan Carlos, who is from Mexico and was once undocumented himself, explains.

I also meet Aristoteles, who The Good Shepherd has been supporting following his release from an ICE detention centre in Georgia in April. “You don’t get given a release date, so you have no idea how long you’ll be inside,” he tells me. “The immigration system is designed to punish. You lose your humanity. Psychologically, that experience makes you feel like you are worthless – you’re called by a number, not your name.”

“I felt like a little caged dog that had been beaten up. I cried when I finally ate with a knife and fork again,” he recalls. Now, with the support of Juan Carlos and the church, Aristoteles says he is going to put everything he’s learned about the immigration system into helping other people.

In Philadelphia, I meet Clive and Oneita at Tabernacle United Church. They applied for asylum in the US after being forced to leave Jamaica in 2004 when their farm was attacked and burned down by gangsters. Their asylum case was denied in 2009, but they were allowed to stay and work, until two years ago, when they received a phone call. After living in the US for nearly 15 years, they were told they had four days to buy a one-way ticket to Jamaica or face deportation. They knew they couldn’t go back, as Oneita’s brother had recently been killed, so they went into hiding with the church, with their two teenage children. 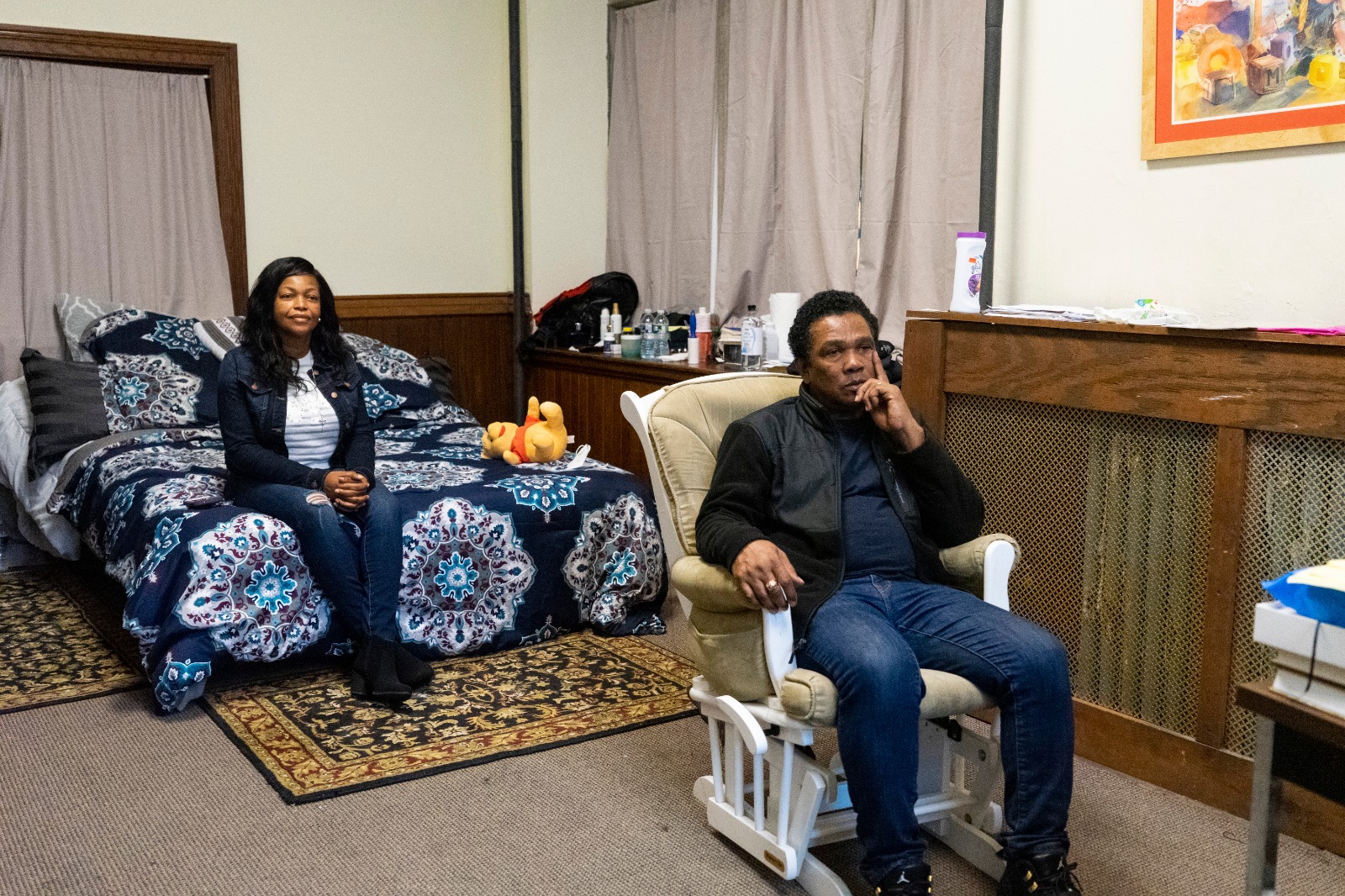 “People see us hiding behind the walls of the church and think you did something wrong,” Oneita explains. “We did everything by the book, but still our family has been broken apart. The Obama administration allowed us to stay but the Trump administration has made it clear they don’t want Black and brown people in this country. They have tried to get rid of as many of us as they can.”

In Philadelphia, the NSM comprises over thirty congregations and community groups, whose membership represents the city’s diverse population: white, African-American, Hispanic, Caribbean and Philippine. The NSM pushed to make Philadelphia a ‘Sanctuary City’ in 2014, which among other measures forbids local law enforcement from engaging with ICE.

There are now 700 cities and counties in the US that call themselves sanctuaries – a number which rose sharply after Trump assumed office. Philadelphia and its Democratic mayor Jim Kenney have engaged in a public battle with the Trump administration over its Sanctuary City status but in practice, in Philadelphia and elsewhere, ICE is still active and cases of their collaboration with local law enforcement regularly come to light.

During his campaign, Biden spoke the language of decency and human rights. However, he was vice-president during an administration which deported more than five million people, which led activists to dub Obama ‘deporter-in-chief’.

“In many ways, Trump merely accelerated border security infrastructure that was already under construction during the Obama-Biden administration,” explains Jorge E. Cuéllar, a professor at Dartmouth College. “There’s a certain amount of scepticism about Biden, but many who care about immigration policy voted for him as a means of harm reduction; to move away from the supercharged border violence the Trump administration inflamed.” 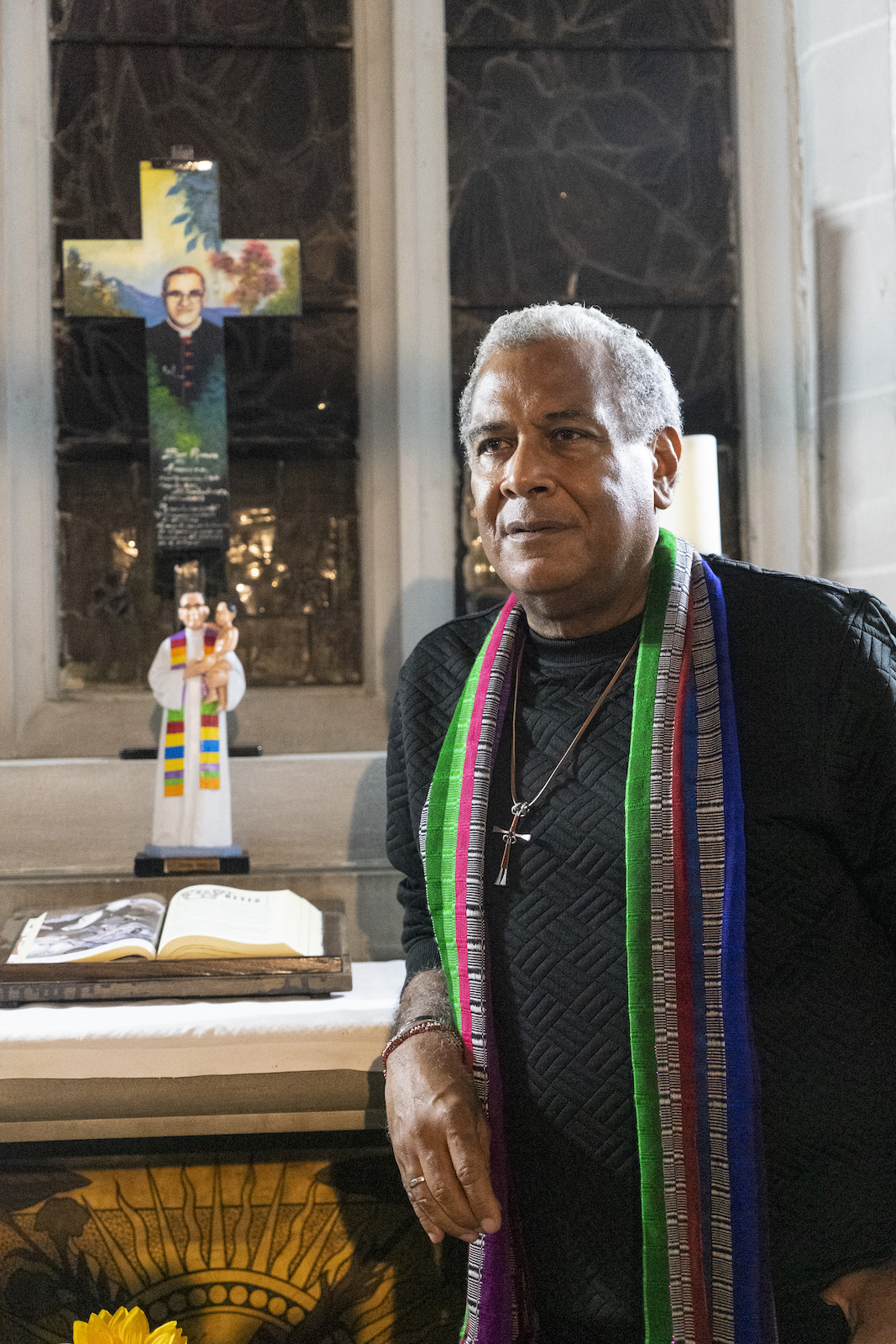 Biden has committed to a more humane immigration regime and to address the “root causes” of migration. But activists are sceptical that he will meaningfully reform the security-focused nature of US immigration policy or enact policies they would like to see, such as a moratorium on deportations, abolishing ICE and creating genuine paths to citizenship for the millions of asylum seekers and undocumented people currently living in fear and limbo.

Back in Washington Heights, the children are still playing among the pews. Pastor Barrios watches them, smiling. Since arriving at the church, he has pushed to expand the definition of ‘sanctuary’ to create space for drug users, gang members and LGBTQ+ people in the church – battling against homophobia, machismo and intolerance among his congregation in the process.

Having spent years fighting unjust government policies which hurt immigrants and the marginalised in his community alike, he’s sceptical about how much change a Biden presidency could bring, but he remains hopeful. “Capitalism is at the root of all this sexism, racism and injustice – the sickness of our society,” he tells me.

“But by creating our model of sanctuary and working together to raise the consciousness of people, that is our most powerful weapon to fight back.”

Linkedin
RELATED ARTICLES
OTHER ARTICLES
Birdy Chu reflects on documenting the historic moment in which the territory was formally passed back from the UK to China.
Ahead of the release of their first collaborative album, the producer and rapper talk psychedelics and the state of UK hip hop.
A group of young Palestinians have found temporary freedom in the act of parkour, reimagining wreckage and ruins as a series of high-octane playgrounds.
Thousands attended the annual event this year to wheelie through the city and call for ‘knives down, bikes up’.
The idea that a younger generation is abandoning work has become a popular narrative online, but it doesn’t necessarily reflect reality.
In his 2008 series, the photographer pictured himself as Angela Davis, Martin Luther King Jr., Malcolm X, and other prominent figures.