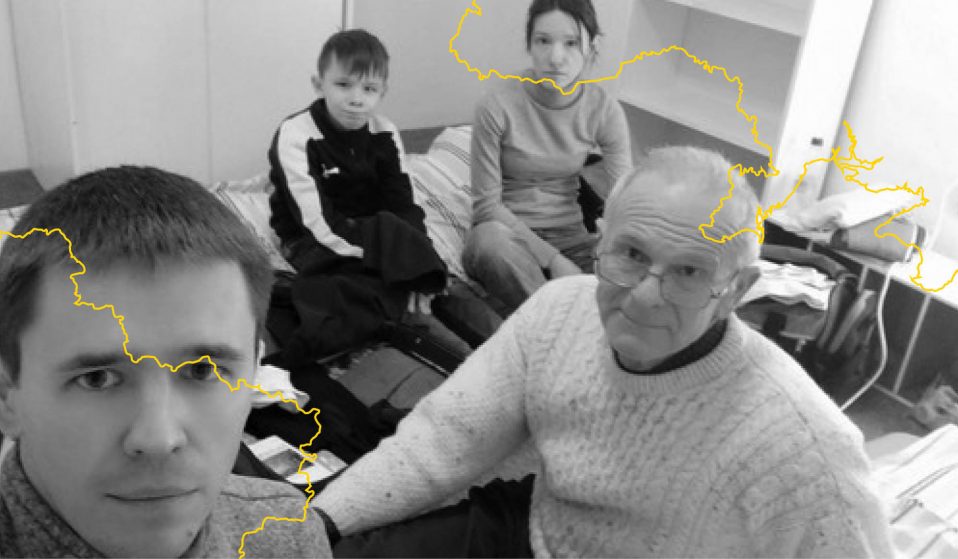 Tanya Tame describes the ordeal she’s faced trying to bring her family members fleeing war to the UK in the face of a draconian immigration system.

Tanya Tame describes the ordeal she’s faced trying to bring her family members fleeing war to the UK in the face of a draconian immigration system.

When Russia began its brutal invasion of Ukraine, Tanya Tame’s first thought was to get her family out. The 43-year-old lives in north Hampshire and has spent the last two weeks trying to get her family from central Ukraine to safety in the UK. Despite being eligible for and attempting to apply for visas under the Ukrainian Family Scheme – currently the UK’s only legal route for refugees to enter the country which allows family members to join relatives living in the UK – the family is still struggling to get anywhere. Tanya says the visa system doesn’t work. She has tried to get help from the Home Office and MPs, but has been left feeling frustrated. Her family remains stuck in Budapest.

A recent U-turn by the Home Office has just been announced which would allow Ukrainian nationals to apply for a UK visa online from Tuesday. It is a welcome move after the UK government faced criticism for only taking in 760 Ukrainian refugees so far under its new scheme, as well as reports of many Ukrainians being turned away from the UK border due to a lack of paperwork. Over two million people have fled the war so far, with the UN estimating that four million refugees may flee Ukraine as the situation continues to unfold. More than 150,000 people have signed a petition calling on the UK government to waive visa requirements for Ukrainian refugees.

Below, Tanya shares her experience of dealing with the UK’s draconian immigration, and the psychological toll it has taken.

The family members that I’m trying to get into the UK are my parents who are in their late 60s, my sister, age 36, brother-in-law, age 36, and their son, who is nine. They’re currently in Budapest; they arrived there on Friday night. They have done their visa application to join me in the UK for the family route, which went live on Friday afternoon (4 March). Once you’ve filled in the form on the Home Office website, they register you and send you an email saying now you need to send the documents, and then once you click on that, they send you to their partner company to assess the paperwork, called TLScontact.

We are all shell-shocked; we are all traumatised. But we are doing the best that we can in the situation that we are in at the moment. My family was refusing to leave Ukraine and my husband and I had to use a lot of emotional blackmail to get them to leave. My mum kept saying, ‘I’d rather die in my homeland than travel somewhere’. My brother-in-law’s got some kind of exemption from military service, but he wanted to stay and then my sister was saying, ‘I’m not going to go without you’. Anyway, I made them leave.

They are all really distraught about all of this and feel guilty for leaving. My dad genuinely thinks he will go back soon. I can’t bring myself to tell him that it is very unlikely.

My nephew is usually a very lively child, but he is very quiet now. My sister told me he is not really himself, which you wouldn’t be if you had to drive away from your home thinking, ‘Am I going to be shot?’. That was one of their reasons for not wanting to leave. They said, ‘We’re scared to stay but we’re scared to leave’.

My family was living in the central part of Ukraine called Cherkasy, down the river from Kyiv. They didn’t have very heavy shelling there – not as bad as some other areas – but they did have rockets, and they spent four nights in their cellar. They sent me a picture of them all together in their freezing cold cellar with their dog, and I just thought, I can’t leave them there. During the day when it was quiet they gathered resources and food and took it to the territorial army and helped other people.

It took them three nights driving from their home to Budapest. They’re staying in a flat in Budapest now, which is down to some contacts. When they were in Romania their car broke down. People came to help and they found out that they are from Ukraine and they invited them into their home and fed them, and offered to put petrol in the car. They were really humbled by how helpful everyone has been. But when I talk to them they do seem low and depressed. I think now they are thinking, ‘what can we do if we can’t go to the UK?’.

On Saturday [5 March], they went to the visa centre in Budapest. They had to fill out separate visa forms for each family member – repeating the same information for each family member. I helped them; it took me two hours to fill out the forms. Then the Home Office emailed on Sunday saying that I have to submit loads more paperwork. It’s a settlement visa application and they are reusing the form that they would usually send [in normal circumstances] and it asks you for your property details in Ukraine – and all these documents need to be translated into English.

In the email, they said you can’t upload the documents, you have to post them to an address in London, and it costs £100 plus VAT for each application. That will be about £600.

On Monday, we took the documents to the post office. My husband phoned the Home Office helpline and the people there were saying we get lots of phone calls about this, don’t pay. I think that was just their view – not what is supposed to happen. [Although the Ukraine Family Scheme Visa page says that the visa is free to apply to, Tanya received an email saying she had to pay a fee to post each visa application and was then given conflicting advice by the Home Office helpline.]

The Home Office are asking for documents that have no relevance to the current situation – who has their property details with them when they’ve just fled war? Or who has their marriage certificate with them? I think my family brought some documents but not everything, and someone has to translate them all.

At the moment I just don’t know what to do next. They are stuck there. We are trying to talk to MPs to see what they could do.

I just feel so desperate and helpless. I feel a bit broken. It’s been so relentless in the last two weeks now. I think my body’s just given up now, to be honest.

It should just be easier [to apply for a visa for Ukrainians in this situation] because jumping through all these hoops is becoming one hurdle too much. This morning I didn’t even want to get out of bed. But you do and you carry on because what else can you do?

A Home Office spokesperson said: “Last week we announced a new sponsorship route which will allow Ukrainians with no family ties to the UK to be sponsored to come to the UK.

“This is alongside our Ukraine Family Scheme, which has already seen thousands of people apply, as well as changes to visas so that people can stay in the UK safely.

“The routes we have put in place follow extensive engagement with Ukrainian partners. This is a rapidly moving and complex picture and as the situation develops we will continue to keep our support under constant review.”

Linkedin
RELATED ARTICLES
OTHER ARTICLES
Max Miechowski reflects on documenting land that is being lost to the sea – and the people who live life on the edge.
Through stills, anecdotes and film criticism, a new book examines the portrayal of women’s destructive emotions, reframing it as a challenge to patriarchal structures.
As the cost of living crisis bites, letting go of treats to keep us going is proving difficult – but we should’t just blame ourselves for our financial worries.
A new exhibition is marking the photographer’s 100th birthday with a look back at his extraordinary career.
Alternating between colour and black-and-white, the photographer chronicled sexual liberation, economic crises and the repercussions of the war in Vietnam.
Recent research is highlighting the drug’s enormous potential for treating substance abuse.