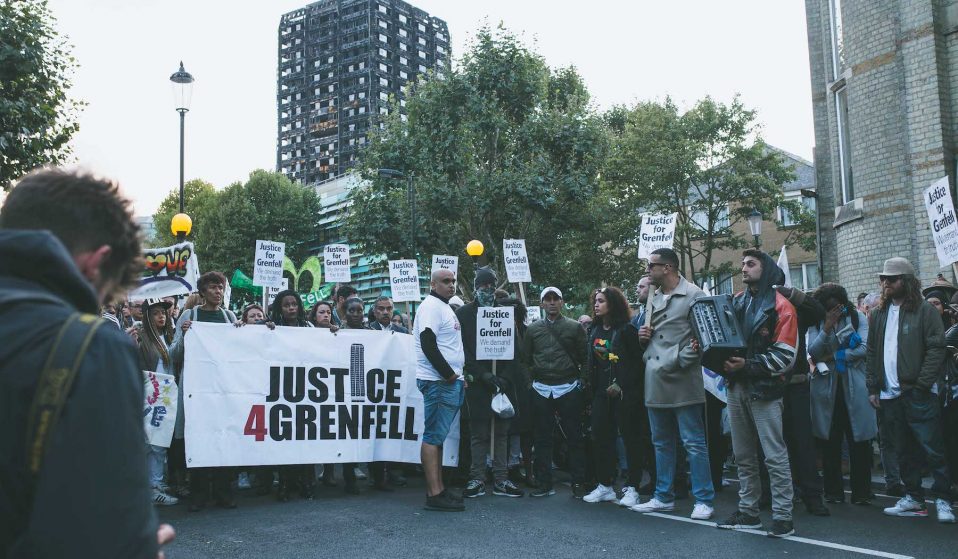 Four years on from Grenfell, the Government has failed to take the necessary action to ensure homeowners’ safety – but a group of young people living in dangerous properties are fighting back.

Four years on from the Grenfell disaster, the Government has failed to take the necessary action to ensure homeowners’ safety – but a group of young people living in dangerous properties are fighting back.

Just before 1am on 14 June 2017, an electrical power surge set a faulty fridge on fire on the fourth floor of the Grenfell Tower block in North Kensington, London. From Flat 16, the fire rapidly spread up the facade, which was covered in the combustible cladding that residents had raised alarm bells about before. By 1:30am, the 24-storey building – home primarily to immigrant and working-class families – was engulfed in flames all the way to the roof. At least 72 lives were lost.

Four years later, thousands of people across the country are still living in flats that have failed their fire risk assessments – with safety defects including dangerous cladding, timber or wooden balconies, no central fire alarms, missing fire breaks, and flammable insulation. Billions are needed to fire-proof those buildings.

So far, the government has pledged a total of around £5 billion to the Building Safety Fund to remove combustible cladding on blocks taller than 18 metres, and to provide loans to leaseholders to do the same for 11-18 metre high buildings. But it is still unclear who will pay to fix all other safety issues. In February, MPs defeated a proposed amendment to the Fire Safety Bill – passed in May – that would have banned homeowners from having to pay for remediation works.

As of right now, leaseholders are expected to shoulder the majority of the cost of making their flats safe, while building developers are only gently nudged to pay their fair share. For young first-time buyers, the initial relief of leaving ‘Generation Rent’ has turned into a nightmare.

We speak to three young homeowners at the helm of their local cladding action groups about the daily stress of feeling unsafe in your own home, their fight against unscrupulous building developers, and what they hope community action can achieve.

“When I bought my flat five years ago, the government was actively encouraging young people to get on the property ladder. They’re still doing that. On Friday June 4, the housing secretary Robert Jenrick announced a ‘first homes’ scheme that offers a 30 per cent discount to key workers looking to become first-time buyers. This is all well and good, but what happens if those flats turn out to be unsafe and no support is given?

“Back in 2018, a fire risk assessment in my building concluded there was minimal fire risk. That reassured me, especially considering what had happened in London a year before. But then, in November 2020, another assessment discovered multiple fire safety defects in my building and 14 others across town. This might not seem like a lot, but Ipswich is tiny.

“That’s when the 24/7 fire patrol of the building – known as ‘waking watches’ – started. It’s unimaginable that this is happening in a UK property – to have people walking around your home checking for signs of a fire. Not only is it intrusive, but it’s also a constant reminder that you live in a place where, if required, you need to drop everything and evacuate as soon as possible. It’s a terrifying thought. It was particularly difficult during lockdown, because we were always at home.

“The stress of feeling unsafe is also compounded by the financial anxiety of being presented with a bill of tens of thousands of pounds to rebuild the exterior of your building. As a young person on an average wage with not a lot of savings, it’s an impossible situation. My neighbours and I are lucky that the building owner said they would fund the necessary repairs and the waking watch. But we don’t know if they’re going to actually keep their promises.

“That’s why we need to apply pressure on the Government. As leaseholders, we don’t have much of a voice in how a developer operates their business or how much funding they will put forward for the remediation costs. The Government has that power, and they have the ability to force developers to do the right thing. We just hope they’ll listen to us.”

“I bought my flat in February 2019 and in October 2020, I found out the building was unsafe. Right now, 112 flats are paying £10,000 a month for waking watches and we’re going to have to put £80,000 towards a fire alarm. That is of course on top of service charges, mortgage bills, and insurance – the cost of which also goes up following failed fire risk assessments.

“I don’t think people realise how much this affects the whole housing market. For instance, if landlords are getting huge bills, that’s going to translate into increased rent. Or if you’re trying to sell your midsize house, people who own flats are going to be your target market. But you’ll struggle to reach this target market because they can’t sell at the moment; they can’t move on. People are having babies in one-bed flats. It ends up having an impact on everyone.

“The confusion caused by the situation and the worry over money have completely taken over our lives and tainted our home environment. There are no nice conversations happening among neighbours anymore. We’re all trying to figure out how we’ll be able to afford it, especially first-time buyers like me.

“A lot of members of the Sheffield Cladding Action Group are young people who had been sold the idea by the Tory Government that a house would be a great, safe investment. But the reality is so different to what we’ve been promised. Young people don’t have a big financial buffer – in terms of savings or a good credit score to take out loans – and our flats are not investment properties that we can just rent out. We’re living in those flats, we’re feeling the effects of being there and having to pay for the mistakes of building developers.

“In addition to my work with the Sheffield Cladding Action Group, I also post on TikTok every once in a while to share my journey, and hopefully make potential first-time buyers think twice. I’ve gathered thousands of views on some of my videos, and although that can feel a bit overwhelming, I’m glad that my message is being spread to young people. I want to make sure they don’t fall into the same trap I did.”

“I was 25 when I bought my flat. For around four years it seemed like it was fine, until this summer when we found out our building was covered in dangerous cladding. Not only that, but we have no emergency signage or smoke seals on our front doors, and the compartmentation wasn’t even built in line with fire safety regulations.

“Since then, it’s basically become another full-time job for me to try and figure out how to get ourselves out of this situation – speaking to our MP, making contact with people in other buildings, and campaigning online.

“I organised the June 5 demonstration in Stevenage – which was part of a national wave of protests – in only five days. It’s been very challenging. With the Hertfordshire Cladiators, we’re trying to both raise awareness of the problem in the local community and provide a support network to those affected.

“People are mostly worried about money. We should receive our bill for remediation costs in a matter of weeks, which is going to be in the millions for the whole building. Some buildings across the country have received theirs, and it can go up to £30,000 per flat. We know it’s coming and I think that when it does, it’s going to really hit the people who’ve been struggling through Covid-19, including young families and people who’ve lost their jobs.

“We have that blank check above our head all the time, and we can’t really move on with our lives. We want the government to at least acknowledge the frustration that people are feeling. Soon we may be starting to see leaseholders defect on their properties, go bankrupt. Something has to be done right now.”

Linkedin
RELATED ARTICLES
OTHER ARTICLES
Photographer Sean Maung reflects on documenting a small town in Pennsylvania afflicted by high levels of unemployment, poverty, violence, crime, and addiction.
After blocking the Scottish government’s gender recognition reform bill, Westminster is now devising further changes to the law to make it harder for trans people to self-identify.
Jeffrey Henson Scales intimate portraits and protest images of the BPP and its leaders offer a rare insight into organisation at a time of societal upheaval.
Activists and campaigners are fighting back against new laws that would seriously undermine the ability to take industrial action, calling it an attack on fundamental workers' rights.
The first-generation graffiti artist reflects on the tagging’s emergence as an art form and the players who pushed the medium forward.
Yohon Tatum, aka Legendary Father of the House of Tisci, reflects on nurturing a new generation of talent.